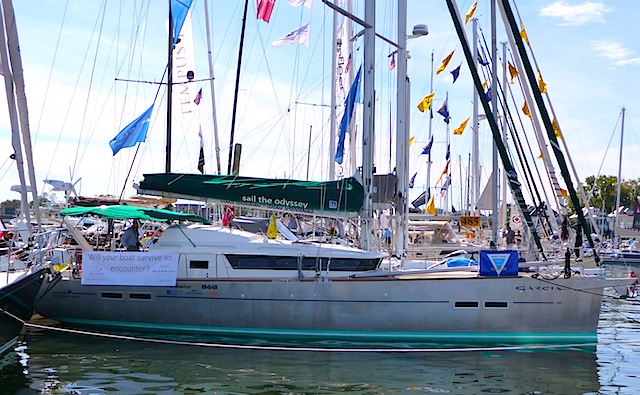 Not surprisingly, one of the big draws at this year’s U.S. Sailboat Show in Annapolis has been the new Garcia Exploration 45, developed by French builder Garcia Yachts in cooperation with bluewater sailing guru, author, and ARC founder Jimmy Cornell. I’m a big fan of Garcia, which has been building boats for 40 years now, both because they build in aluminum and because they do it exceedingly well. In the last several years most of their boats have been large stratoshperic custom jobs, well beyond the reach of mere mortals with less than a couple of million to spend, so it’s heartening to see them again building something a bit more accessible.

Jimmy and I have some history, as I first met him crewing around in his America 500 cruising rally way back in 1992, so he was happy to show me around the boat this past Thursday shortly after the show opened. After retiring from the rally racket some years ago, he took to roaming the planet in aluminum centerboard Alubats and spent some time cruising in high latitudes. So he had some pretty specific ideas about what he wanted when he approached Garcia about building his next boat. 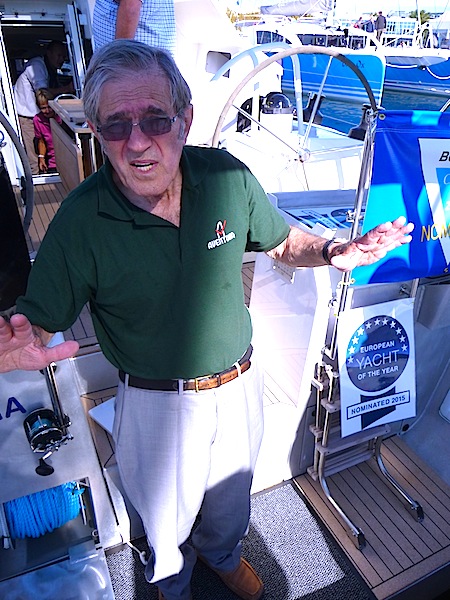 Jimmy holds forth on the stern of his latest Aventura. Like its predecessors, this is a boat with an integral centerboard and lots of internal ballast stashed in the bilges. Jimmy likes centerboard boats for sailing in very strong conditions, as he says they’ll skid away from breaking seas when the board is pulled up 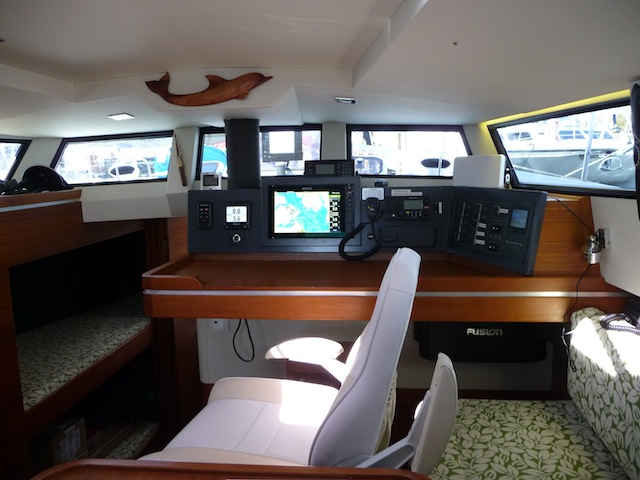 Jimmy wanted a boat for cruising both in high latitudes and in the tropics so specified a deck saloon layout with lots of windows affording a catamaran-style wrap-around view of the world. He claims this is the first true deck-saloon centerboard boat ever built. You can steer the boat by wire from the comfy nav station there, where there’s also a throttle control for the engine, so you can run things from inside when you want. On the left down there you can see two of the four single bunk berths on the boat, which is what Jimmy favors for sleeping offshore. There are also two double staterooms, so the boat can sleep eight people total 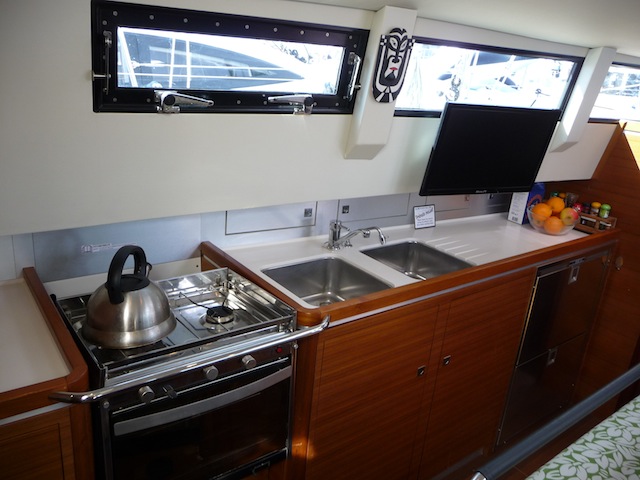 The galley is straightforward and fairly simple, laid out to port alongside the saloon 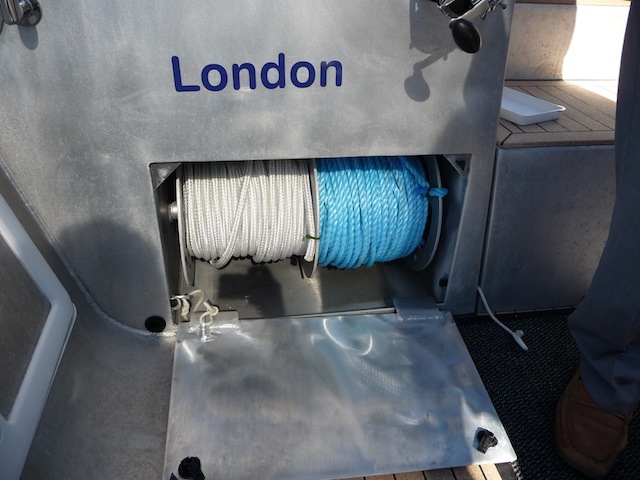 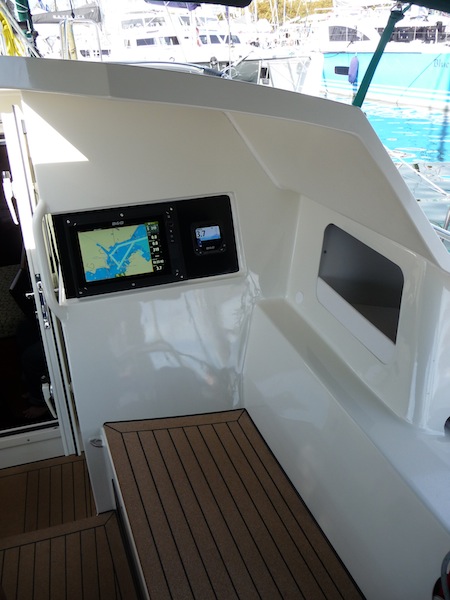 People I talked to either loved or hated the overhanging hard-dodger coachroof. You can count me in the former group. To achieve the complex shape, the coachroof is a molded composite structure, the only bit of the boat that isn’t aluminum. There’s also a very bulletproof compnanionway door 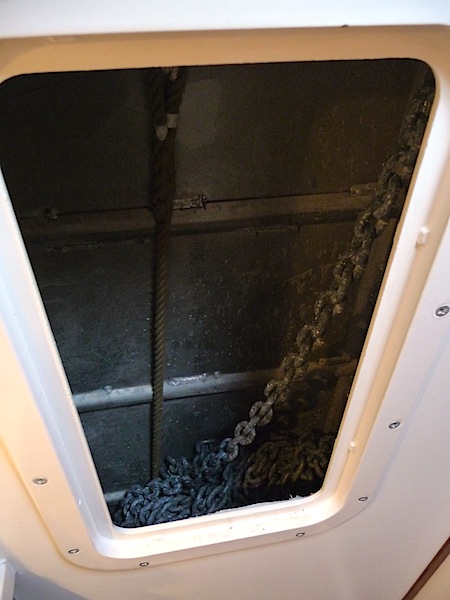 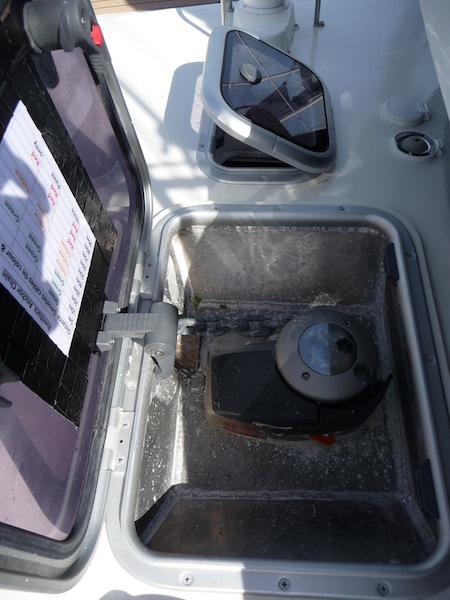 This is what Jimmy got most excited about when showing me the boat–a true midships chain locker hidden behind the door in the head just forward of the mast. The chain (Jimmy carries 100 meters!) is pulled aft through a pipe by a midships windlass hidden under a deck hatch

The next most interesting boat IMHO is this fairly simple Slovenian-built sport-boat, the Seascape 27. 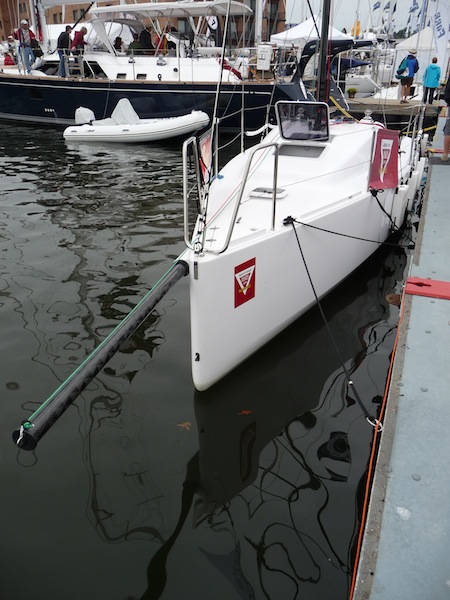 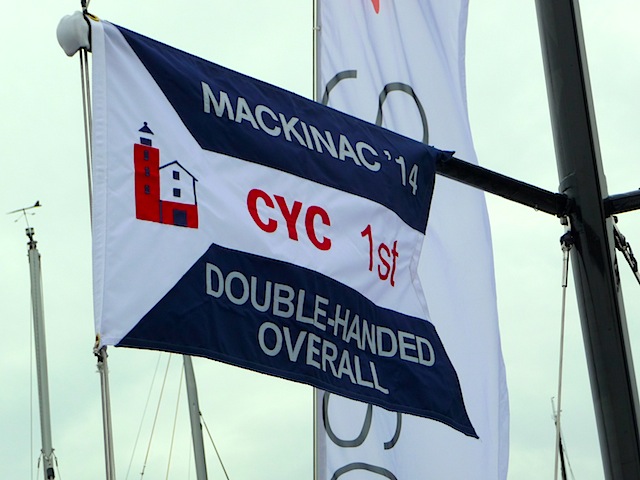 It is quite affordable, comes with a carbon rig and sprit, and despite having easy-to-manage controls (it looks like it truly can be sailed singlehanded) seems to be fairly competitive–as evidenced by the fact that it took 1st place in the doublehanded division of this year’s Mackinac Race.

It also has a number of clever features, the most prominent of which is a center-cockpit outboard well. 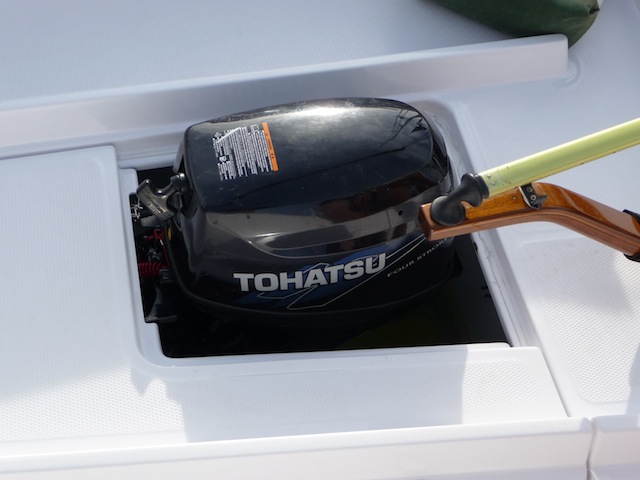 Engine deployed and ready to work. This is an 8-hp four-stroke Tohatsu, which seems to be the largest mill you could fit in the well. What’s nice, of course, is getting weight off the transom 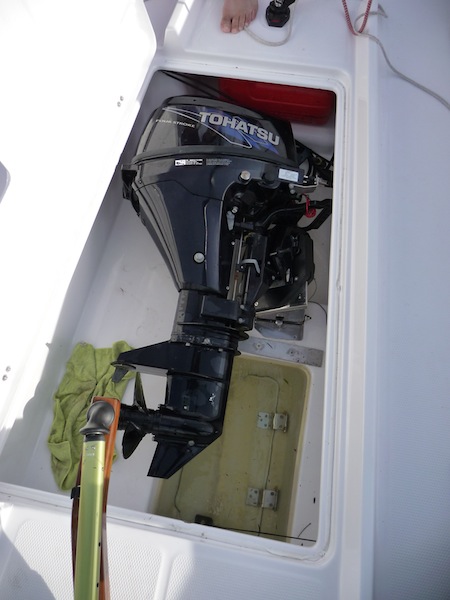 Engine hoisted and put to bed with the hull aperture closed 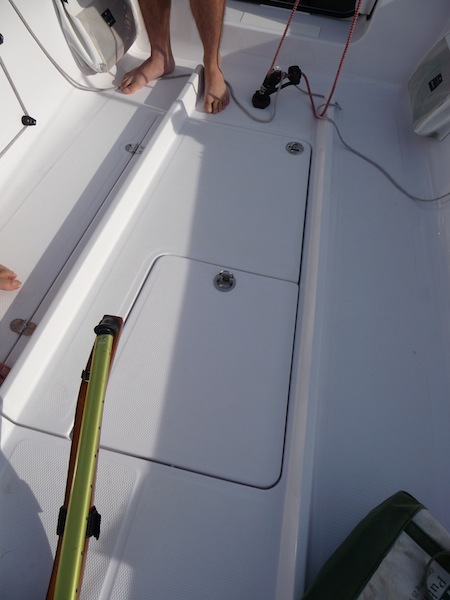 Engine sleeping under the cockpit floor, ready to run again when needed 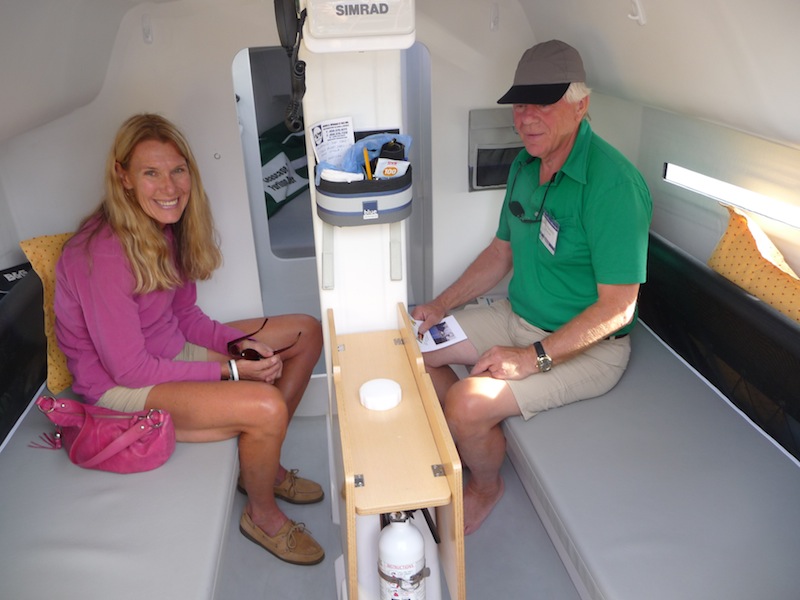 Other intriguing vessels include: 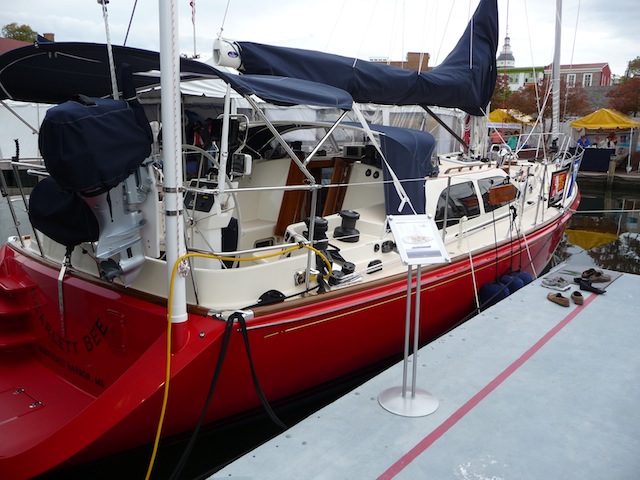 This delicious Morris Ocean Series 48GT, which also seemed very popular with the tire-kicking crowd on Friday. Not exactly a new boat, as this is a design Morris Yachts first introduced a number of years ago, but this example has some unique features, including a taller rig, exchangeable keels (one for cruising, one for racing), and lots of rig refinements 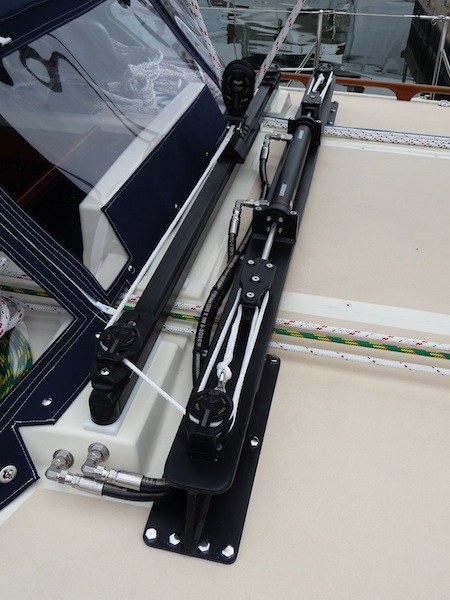 For example, this hydraulically controlled traveler, controlled from the helm, that you can instantly dump from behind the wheel with a touch of a foot-switch 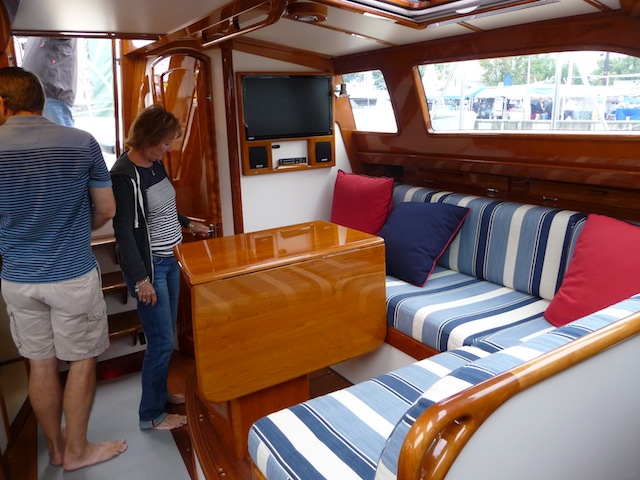 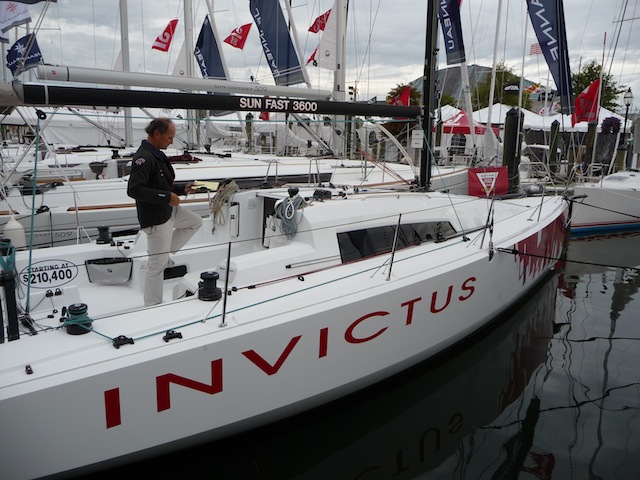 The Jeanneau Sun Fast 3600, an affordable modern race boat from our friends in France 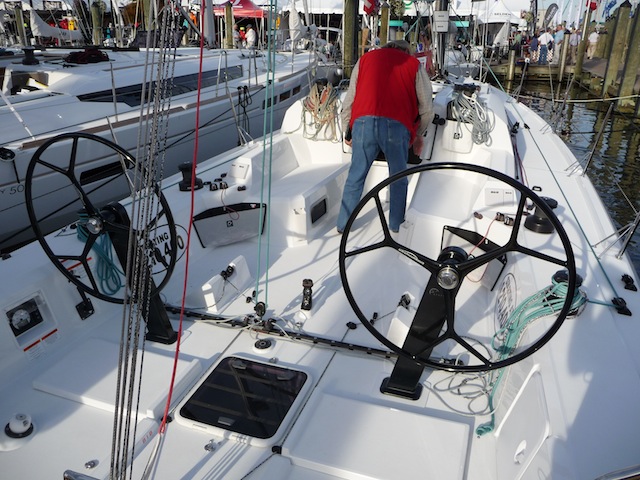 Not the kind of cockpit you normally find on a Jeanneau 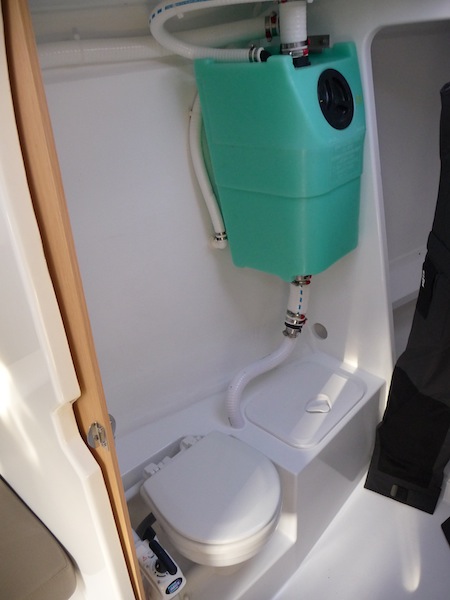 And yes, the interior is quite stripped down, with such features as this attractive holding tank left out for all to admire 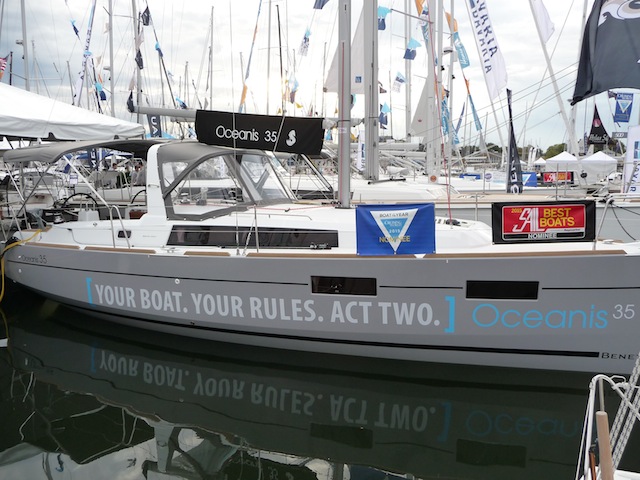 The new Beneteau Oceanis 35, smaller sibling to the award-winning Oceanis 38 that was introduced last year 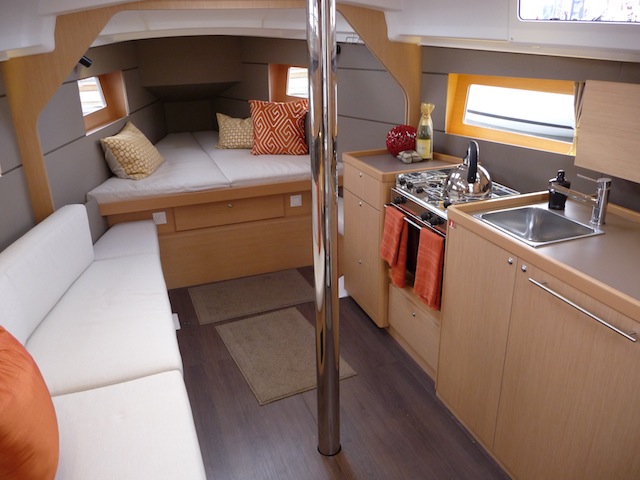 The trick with the new Oceanis range is a total rethinking of what a sailboat’s interior can be. This is just one of several creative alternatives 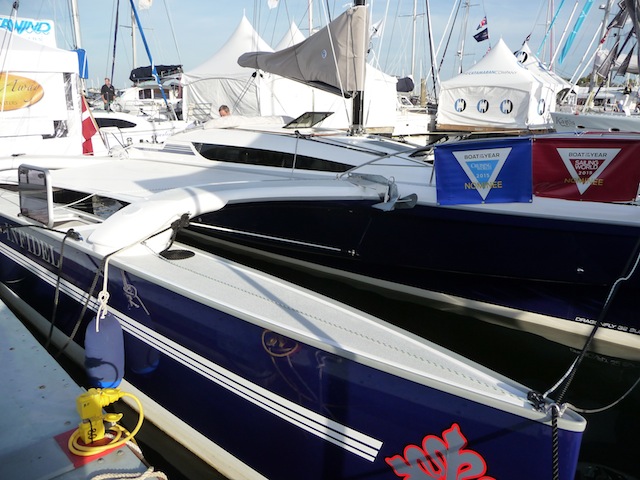 It has a suprisingly large interior for a small tri. There’s a big double berth behind the sliding companionway stairs, a decent saloon with table and settees, and another double forward

Finally, from the Now I’ve Seen Everything Department, I wanted to share a few details from the Balance 451, a new catamaran that took me by surprise. 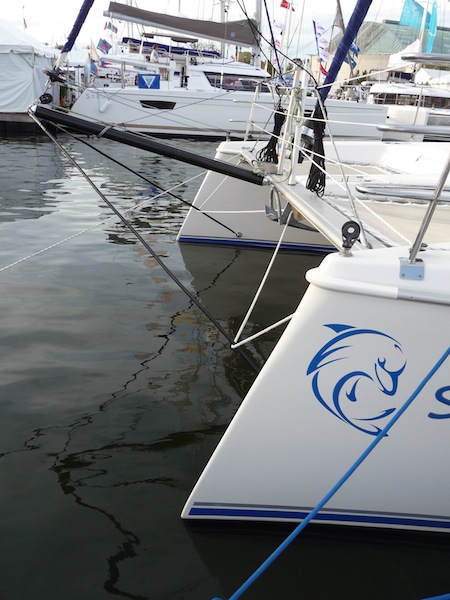 The most severely reversed “wave-piercing” bows I’ve ever seen on a cruising cat. Waves will run screaming home to their mothers when they see these puppies coming at them 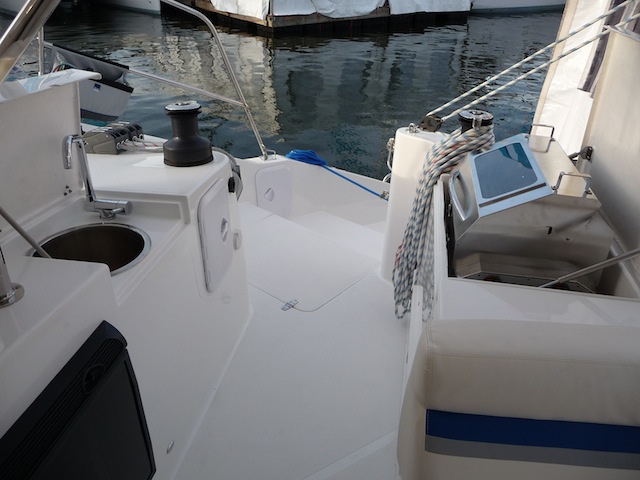 A huge barbecue rig, essentially an outdoor galley, located about the same distance from the cockpit table as the galley in the saloon 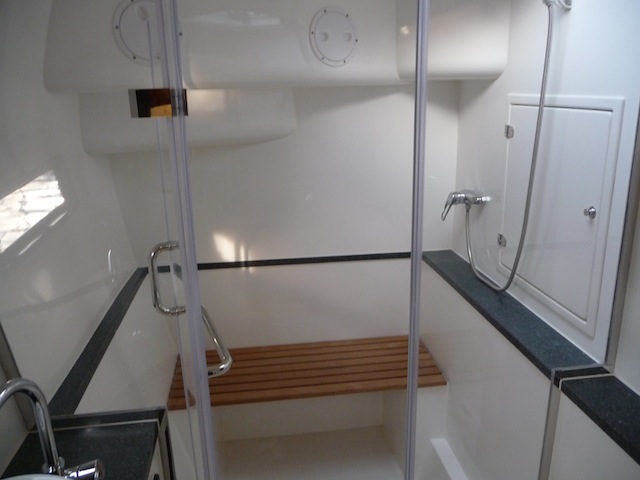 Largest shower stall ever spanning the full width of one hull aft. There’s room for the whole family in there!

There’s lots more to see, and the show is still on! Running through tomorrow. Feel free to go take a look for yourself. As for me, I’ll be back on the scene starting Tuesday for some post-show test sails, so stay tuned for that.