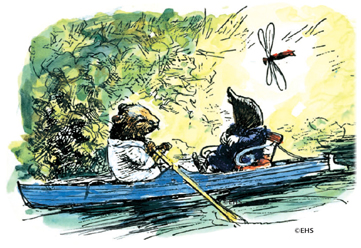 It is certainly one of the biggest cliches in the literature of boating. What the Water Rat said to the Mole: “Believe me, my young friend, there is nothing–absolutely nothing–half so much worth doing as simply messing about in boats.”

But here’s a little tip. Any purportedly literate mariner who quotes that little snippet of Kenneth Grahame‘s classic The Wind in the Willows at you (it appears very early on, in Chapter 1, The River Bank) probably hasn’t bothered to read the entire book. Because the very best bit–the part any cruising sailor, at least, will most readily relate to–doesn’t appear until much later in Chapter 9, Wayfarers All.

This is where the Water Rat, after bantering with some swallows who are preparing to migrate south for winter, meets up with the worthiest wayfarer of all, the Sea Rat, who has abandoned his comfortable life on an inland farm to answer the call again.

What he says to the Water Rat speaks directly to the heart of anyone who has ever dreamed of sailing south for the winter:

There, sooner or later, the ships of all seafaring nations arrive; and there, at its destined hour, the ship of my choice will let go its anchor. I shall take my time, I shall tarry and bide, till at last the right one lies waiting for me, warped out into midstream, loaded low, her bowsprit pointing down harbour. I shall slip on board, by boat or along hawser; and then one morning I shall wake to the song and tramp of the sailors, the clink of the capstan, and the rattle of the anchor-chain coming merrily in. We shall break out the jib and the foresail, the white houses on the harbour side will glide slowly past us as she gathers steering-way, and the voyage will have begun! As she forges towards the headland she will clothe herself with canvas; and then, once outside, the sounding slap of great green seas as she heels to the wind, pointing South!

And you, you will come too, young brother; for the days pass, and never return, and the South still waits for you. Take the Adventure, heed the call, now ere the irrevocable moment passes! ‘Tis but a banging of the door behind you, a blithesome step forward, and you are out of the old life and into the new! Then some day, some day long hence, jog home here if you will, when the cup has been drained and the play has been played, and sit down by your quiet river with a store of goodly memories for company. You can easily overtake me on the road, for you are young, and I am aging and go softly. I will linger, and look back; and at last I will surely see you coming, eager and light- hearted, with all the South in your face!

The sad part, of course, is that the Water Rat does not heed the Sea Rat. Instead he lets that miserable Mole talk him into spending yet another cold winter on the riverbank, shivering in his hole.

Some food for thought, I hope, as the autumn leaves swirl about us once again.

Plus, it raises a question that (perhaps) deserves some serious debate: Are Mole and Rat gay?