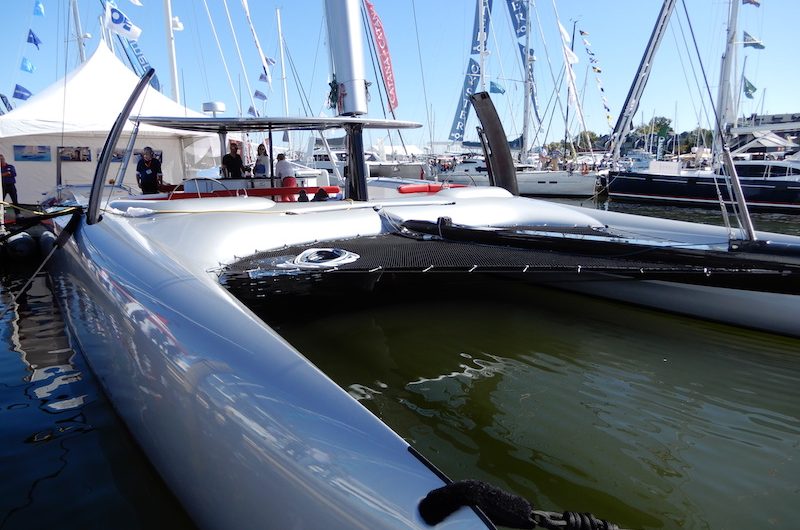 Oct. 12/2019: Just back from Phase One of my annual boat show dive in Nap Town. The most interesting new boat I saw there by far is the Eagle Class 53 (see image up top), a foiling (there’s that word again) all-carbon catamaran with a “hybrid” wing-sail rig. Coincidentally, I saw this very same boat while at the Crown Bay Marina in St. Thomas last winter and wondered what the hell it was. Evidently the creators of this craft, Fast Forward Composites, were tuning up the beast there prior to unleashing it on the world.

It is now unleashed. 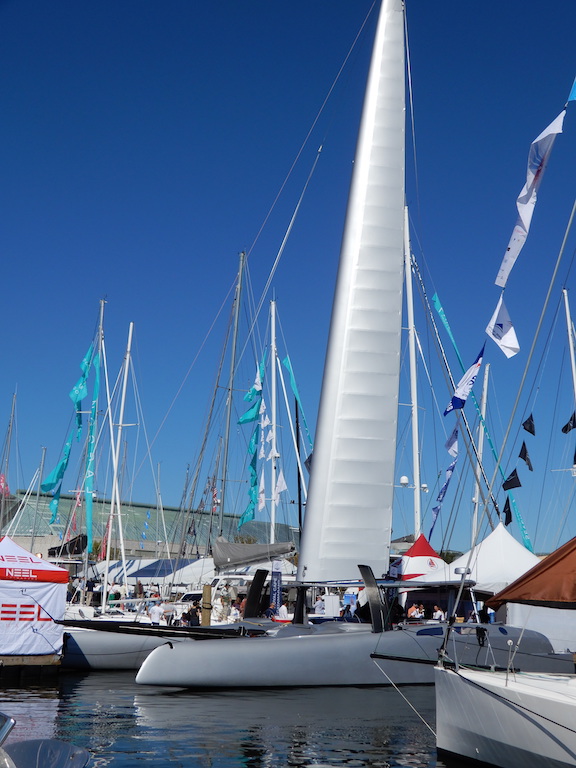 The Eagle’s hard wing main making a statement in the crowd of naked masts at the show. The full sail includes a soft-sail component that is raised on the back edge of the hard wing. The theory being that by reducing the size of the hard component you can leave it up to pivot in the breeze instead of having to hire a crane to take it down every time you park the boat

The Eagle under sail, with its hybrid main flying, in a shot from the Fast Forward website. The boat is said to be capable of sailing at 25-35 knots in a moderate breeze 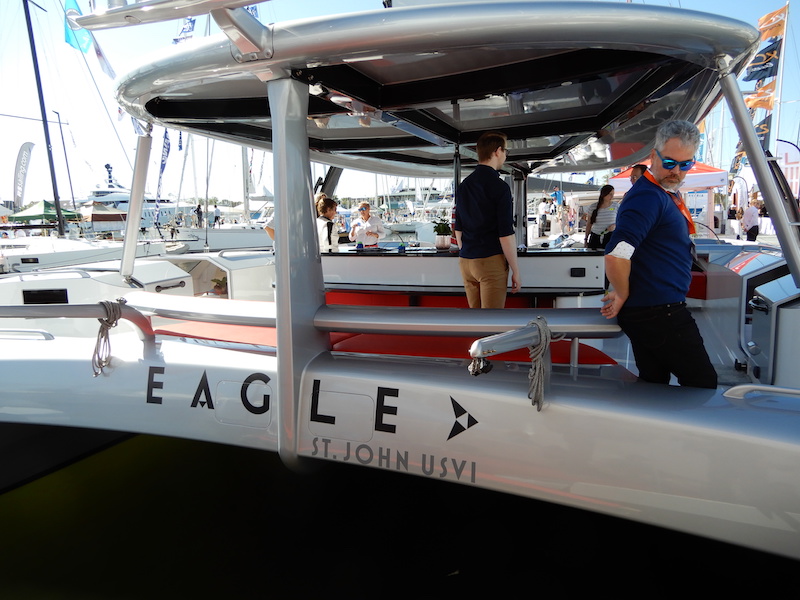 Back end of the craft back at the show. The fellow in the blue mirror shades is T.E. Goffrier, who helped design it. You can order one yourself for somewhere between $5-7 million, depending on how you want it equipped 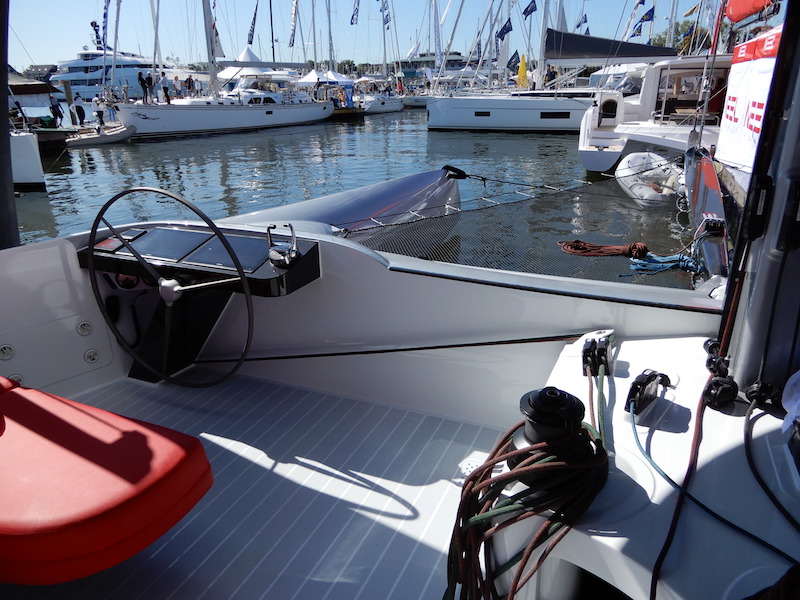 One of the forward helm stations. One crew member I talked to did admit it can get a little wet here at times 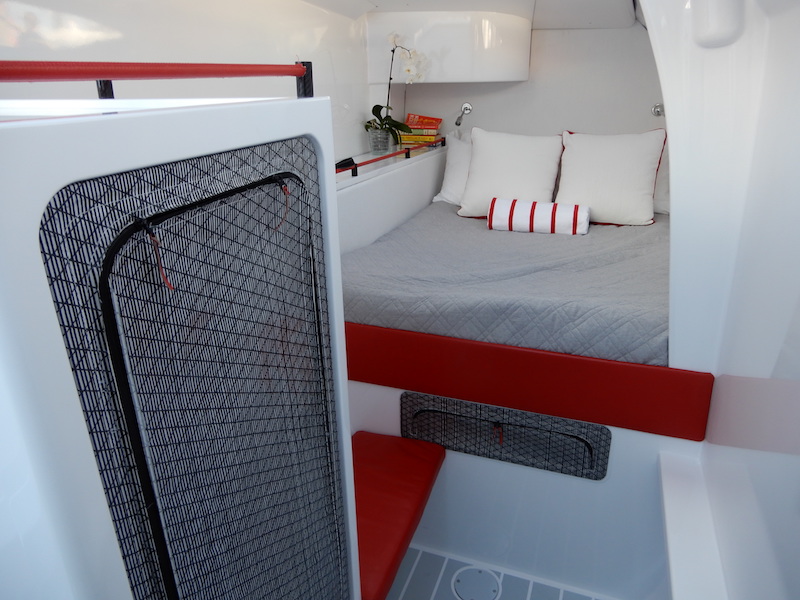 Yes, there are accommodations. A cabin in each hull with a double berth, plus there’s a minimalist galley up on the open bridgedeck 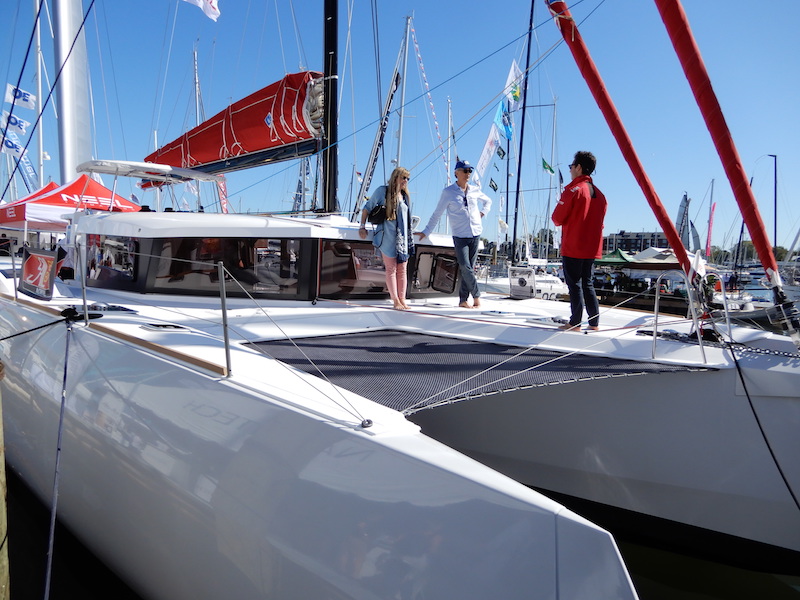 The new Neel 47. These French trimarans seem to be quite popular. Cruising in Maine this summer I even saw one coming down the Kennebec River (not a 47, but an earlier model). I’ll be back to sail this one next week 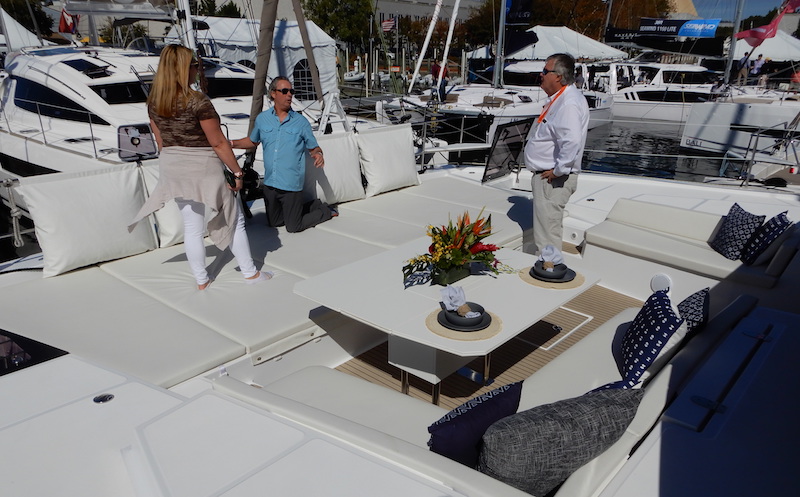 I know what you’re thinking. Who wouldn’t want the foredeck of their boat to look like this? This being the front end of the new Bali 5.4 catamaran 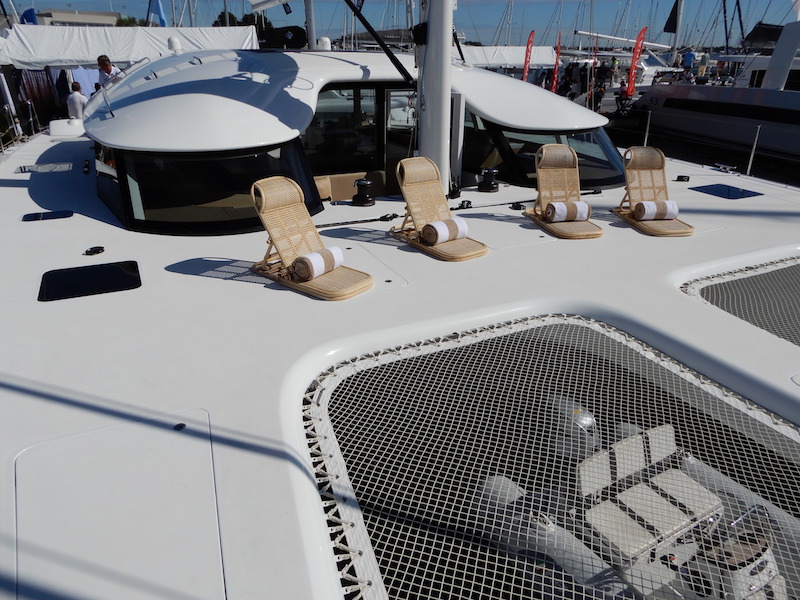 A much more restrained approach to foredeck lounging was evident on the new Ocean Explorer 60 catamaran. Another boat I’ll be sailing during Phase Two of my Nap Town dive 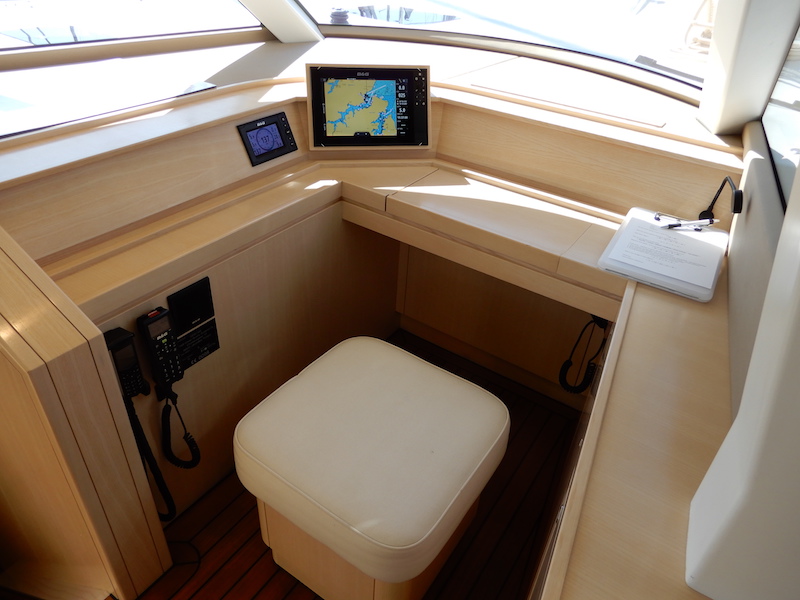 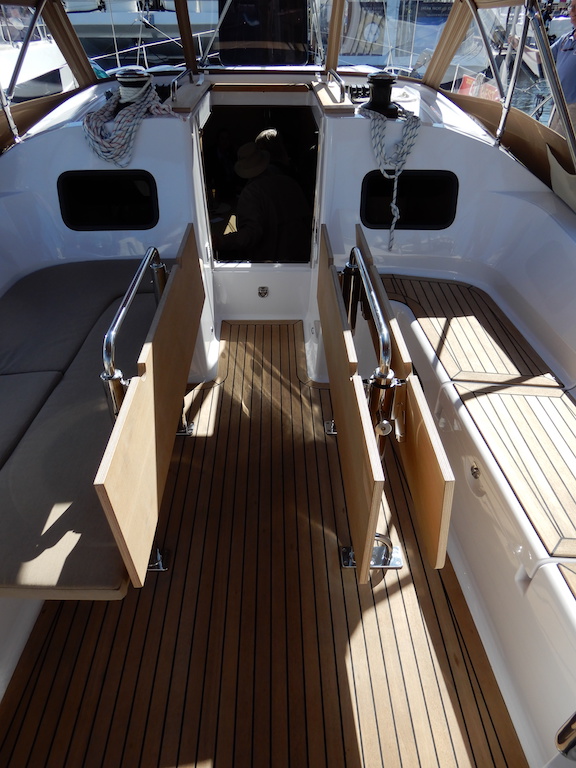 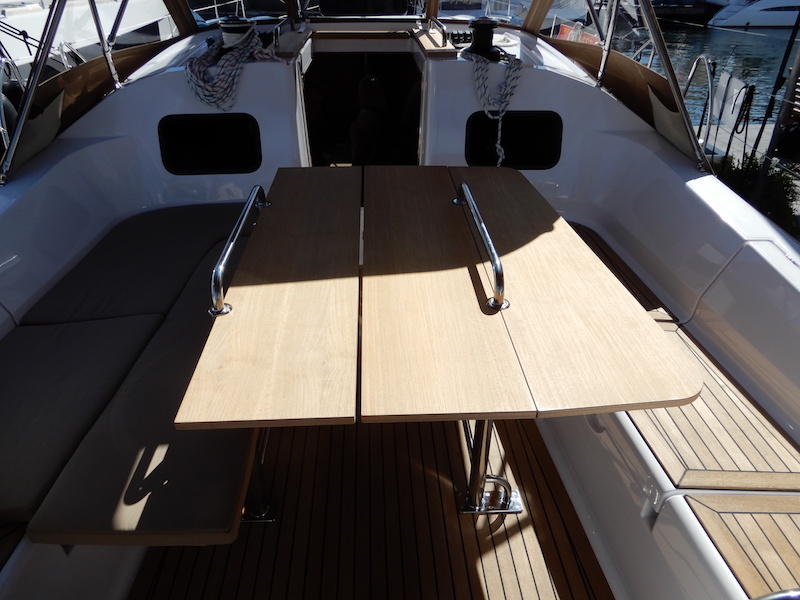 Personally, though, I don’t really get it 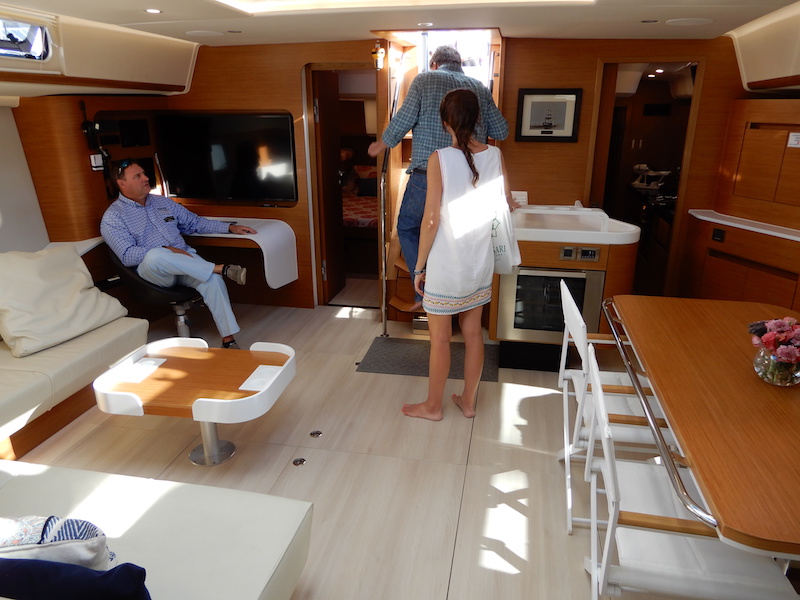 The enormously elegant saloon on the new enormous Hanse 675 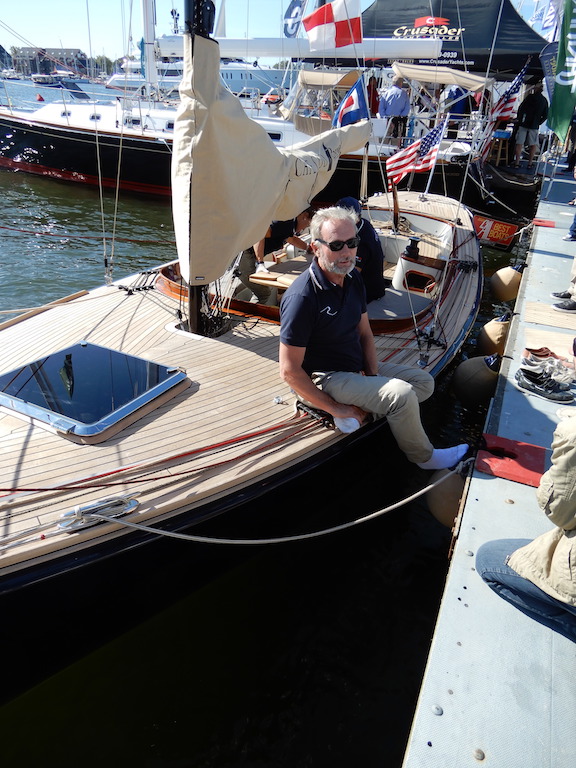 My favorite boat at the show was the Cape Cod daysailer from Rosewest Yachts of France. One reason was because I actually got to sail it at the show, as it’s tied up on an outside dock. Another is that it simply beautiful 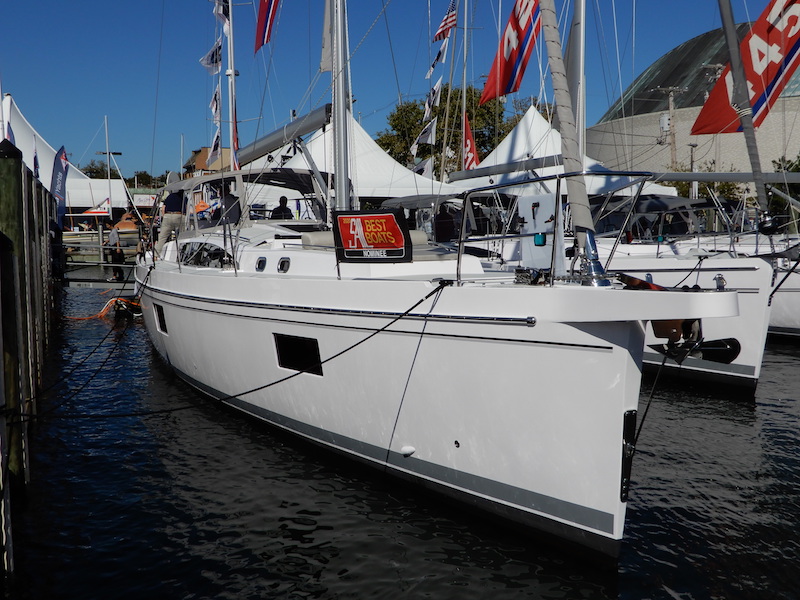 My next favorite boat was the new Catalina 545. The biggest Catalina ever. It is chock full of carefully thought-out features, just like on the smaller ones 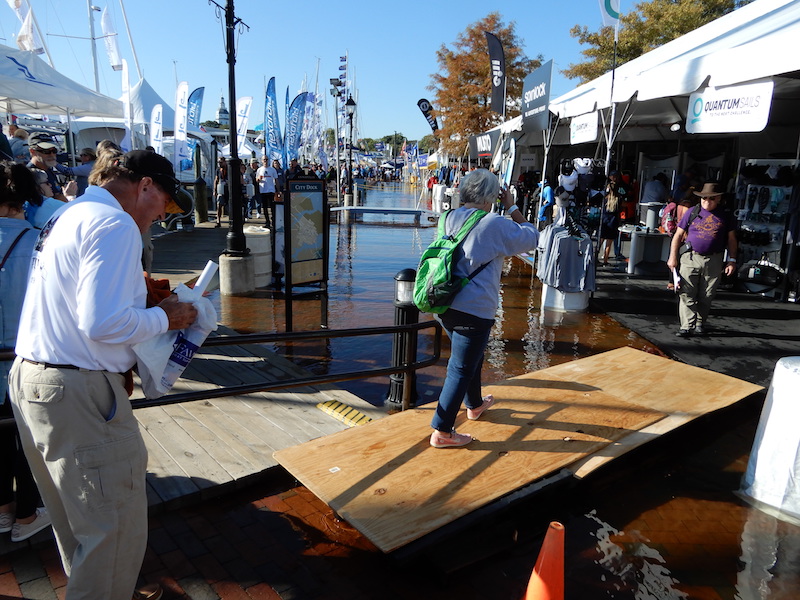 Flooding! No rain or anything. Just a super high tide. This was before the tide peaked 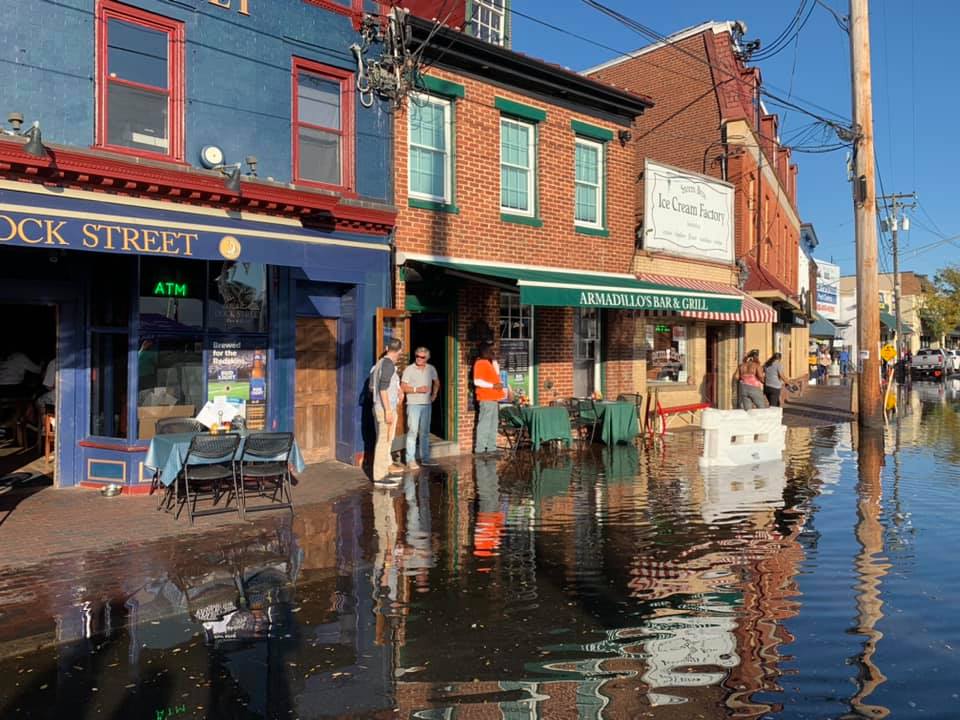 This was just outside the show, as the tide was peaking. Evidently this is becoming more and more common in Annapolis. Thanks God it’s only a Chinese hoax

The show is still open tomorrow. Hustle on down and check it out if you’re around. But be sure to bring wading boots.