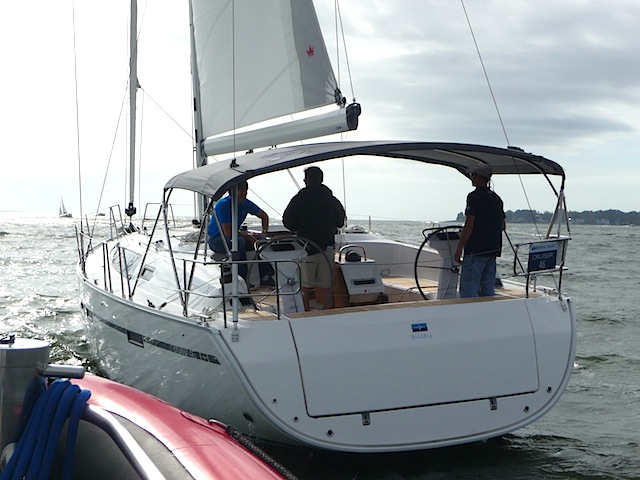 Just back from test-sailing boats après-show this past week at Annapolis. Five boats in two days in fairly strong conditions, with the wind blowing 20 knots at time. Once I even saw gusts to over 30. This is ideal! Normally we get light wind, which makes it harder to get a good sense of how boats behave. My first boat on day one was the Bavaria Cruiser 46, which really is just a new updated version of the Bavaria Cruiser 45. The hull and underwater appendages are the same, but the deck and interior have been modified. As you can see in that photo up top, she has a very wide butt and an enormous fold-down transom.

I shared my test-sail with John Kretschmer of Sailing magazine (whose most recent book, Sailing A Serious Ocean, I highly recommend), and unfortunately we spent much of our time aboard trying to get the sails to set properly. The boat had just been set up and had never been sailed before and still needed a good bit of tweaking to get going anywhere near her potential. This is actually fairly common, and we try to work around it as best we can, but here’s a hot tip for builders and dealers: to get the best reviews, prep the boat first if you can.

Fortunately, in this case I had previously tested a Bavaria Cruiser 45 in Grenada that had been meticulously prepared by James Pascall of Horizon Yacht Charters, so I knew exactly what the boat is capable of. She’s a powerful modern cruiser, quite fast for a boat of this type, and easy to control on the wind, in spite of her wide transom, thanks to her twin rudders. 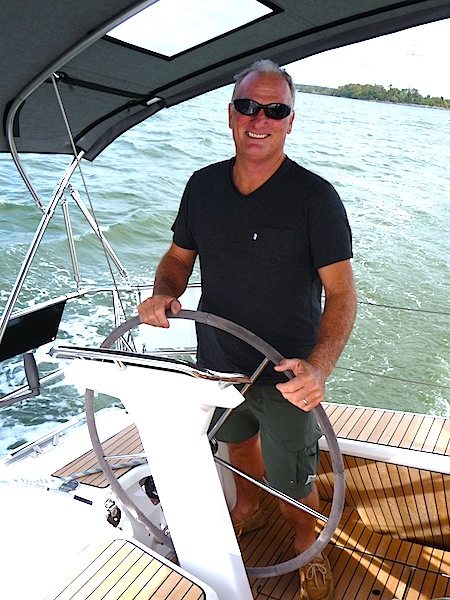 John at the helm. The twin helm stations are comfy to steer from, with neat flip-up foot chocks in the cockpit sole that help keep you in place when the boat is heeled. There are winches right by each wheel, but they are under-sized. You need to go electric, or order bigger winches, or both (just in case you lose power) 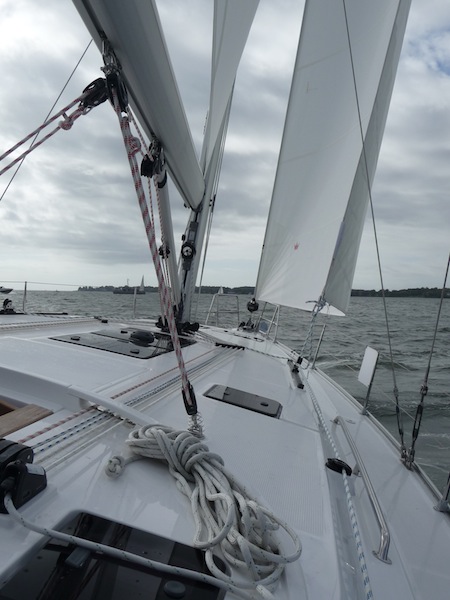 Our test boat had the standard in-mast mainsail (spars are by Selden), which is controlled by twin mainsheets in a bridle. This is not the same as a double-ended “German” mainsheet–they are actually two single-ended sheets, which allows you a bit more control over sail shape. Of course, there’s a vang to help with that, too 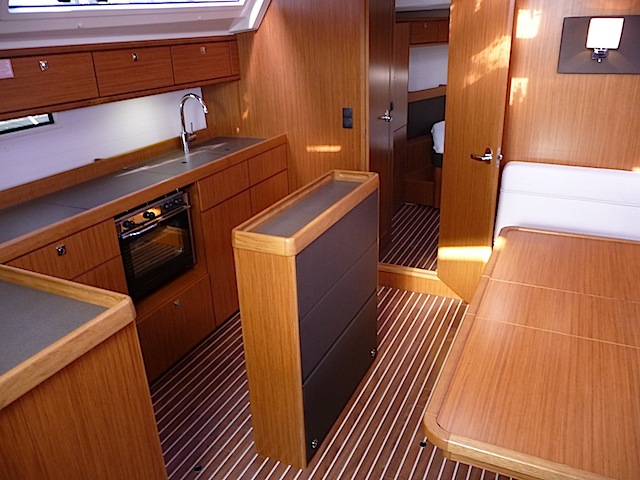 One of the changes in the boat’s interior is this optional island twixt the galley and saloon table. This replaces a short bench seat. The island provides better support for a cook working underway, with easier-to-access storage cabinets, and improves traffic flow for those moving forward. There’s a flip-up jump seat at the base of the island so you can still seat extra people at the table. Also, the new interior has no nav station, but you can order the saloon table with optional nav desk drawers at either end

My second boat of the day was the new Xc 35 from X-Yachts of Denmark. X-Yachts is well known for their fast racer-cruisers, and this is their take on a straight cruising boat. 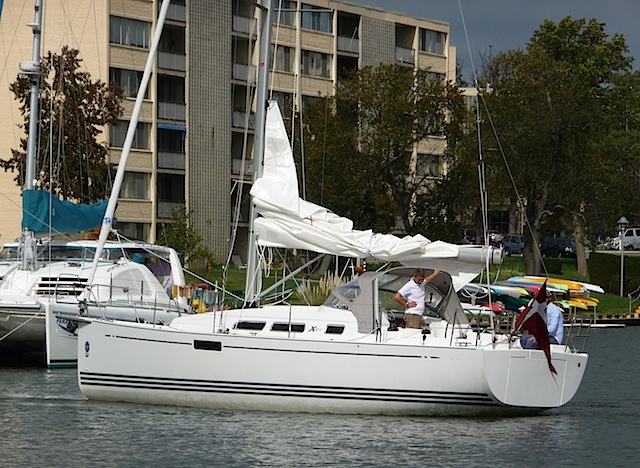 This boat has a fuller hull below the waterline than other performance boats from X-Yachts, to increase tank volume and ease the boat’s motion. It’s still narrow compared to other modern cruisers and sails extremely well. I think most folks would call it a cruiser-racer, and you could certainly race it if you wanted 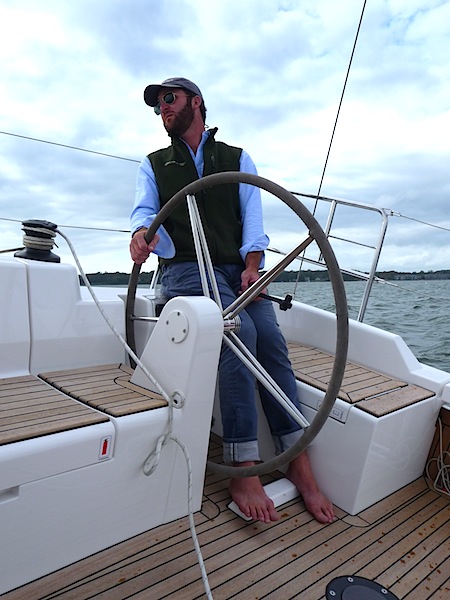 This is Forbes Horton, one of our hosts for the test sail. (Coincidentally, I learned during our outing that he once almost bought my old boat Crazy Horse!) The boat has twin steering stations, but only one rudder. We pressed it as hard as we could sailing upwind (with a full main in 20 knots of breeze) and it never let go of the water. One problem on the test boat was that there was nothing to hold on to in the cockpit when the boat was heeled. You definitely want to order the optional cockpit table, and I’d like to see granny bars over those low-slung wheel pedestals 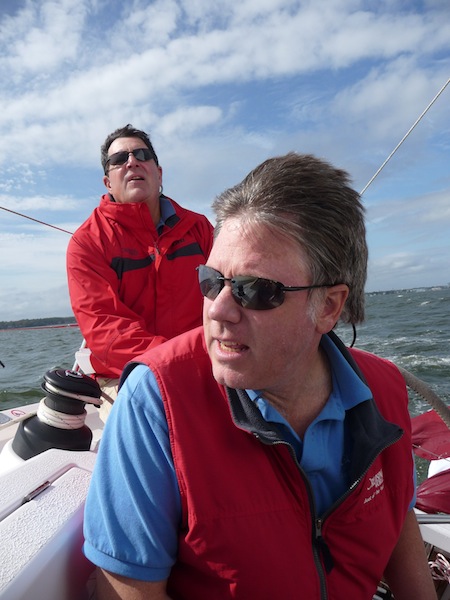 I shared this test sail with the Boat of the Year evaluation team from Cruising World. That’s editor-at-large Tim Murphy, me old roommate (who also, coincidentally, crewed on Crazy Horse the first time I ever took her offshore), in the foreground and that’s editor-in-chief Mark Pillsbury behind him 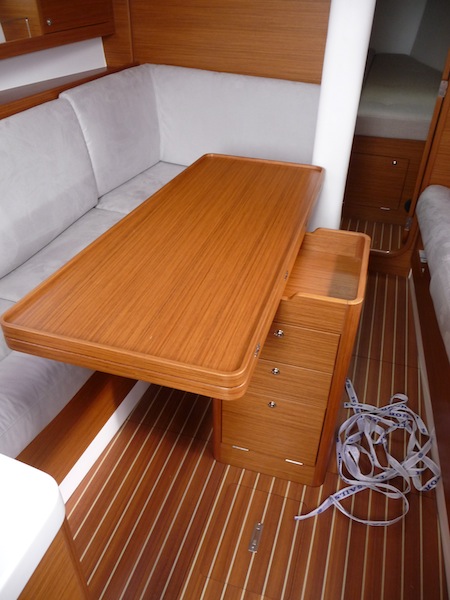 The interior of the Xc 35 is a bit cramped compared to most other modern cruising boats, but this is the price you pay for superior performance under sail. I particularly liked this versatile saloon table 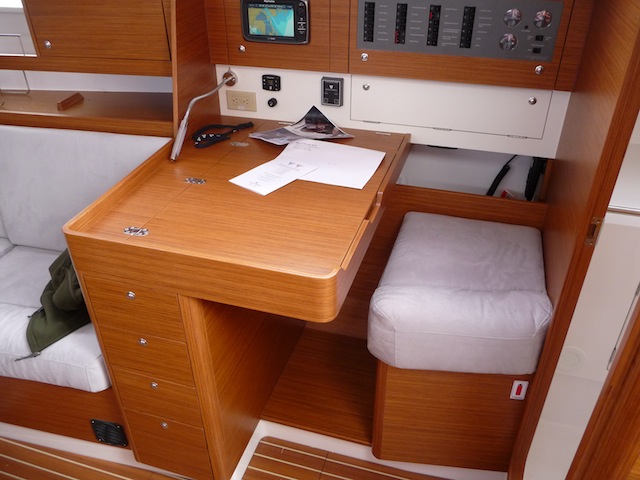 And the boat does have a proper nav station, which is something you don’t see on many new cruising boats these days 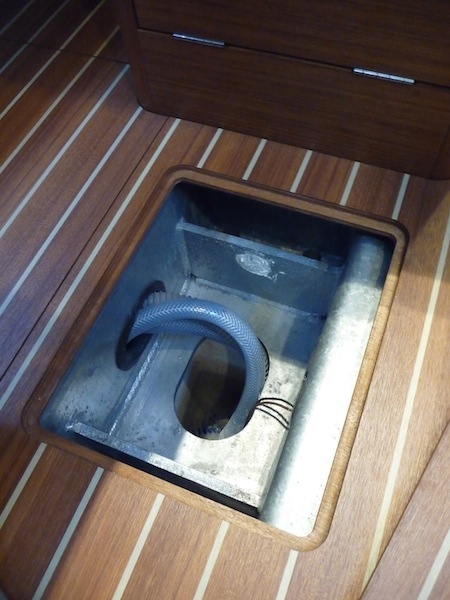 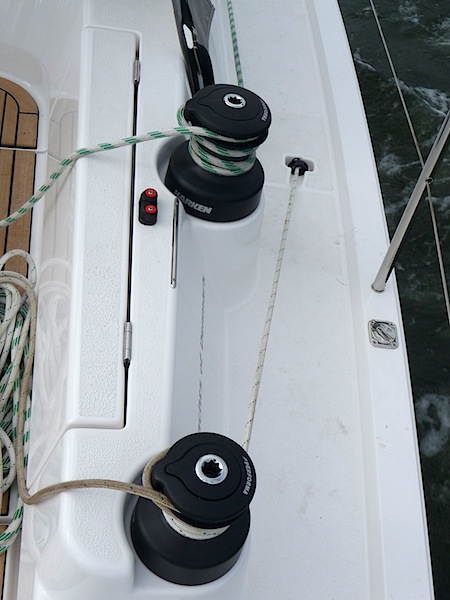 And here’s a revolutionary concept: plenty of appropriately sized winches! The boat comes standard with two winches on each side of the cockpit–the ones aft, by the helm stations, are just for the double-ended mainsheet (led under the side-deck, as you can see here), and the ones forward are just for the headsail sheets. No clutching or un-clutching of lines is required to simply handle sheets, which is the way life should be IMHO. One very nice feature on the mainsheet is that with crew working both winches you can pick up the sheet really fast. All other control lines are handled with another pair of winches on the coachroof

The last boat I sailed on day one was the new Beneteau Oceanis 35, a slightly smaller version of the Beneteau Oceanis 38 that rang lots of people’s bells last year and won many awards, including a Best Boat nod from SAIL. 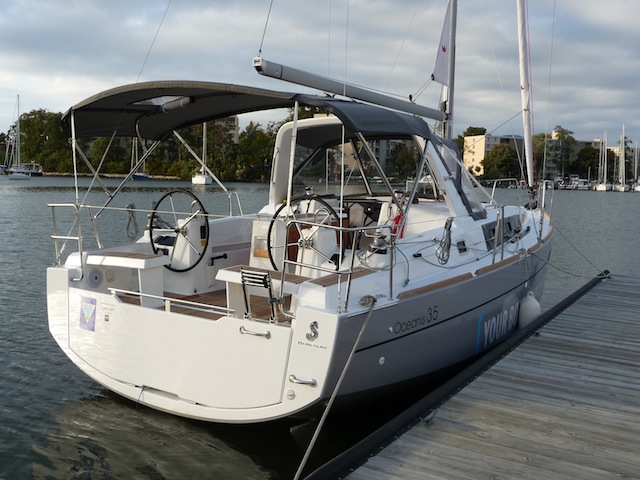 Like all boats in the latest Oceanis iterations, this one has twin wheels, twin rudders, and a big mainsheet arch forward of the cockpit. The transom, of course, folds down, and those helm seats you see fold up out of the way when you want maximum access to the water 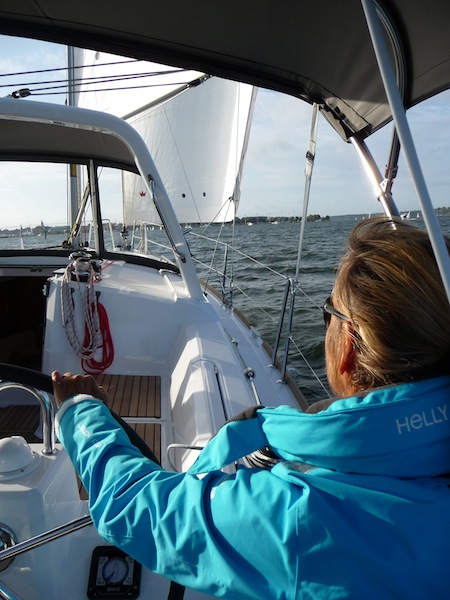 I shared this test sail with Zuzana Prochazka, seen here steering the boat on a broad reach. This boat, too, hadn’t been properly prepared, and the standing rig was way out of tune, but it sailed pretty well in spite of this 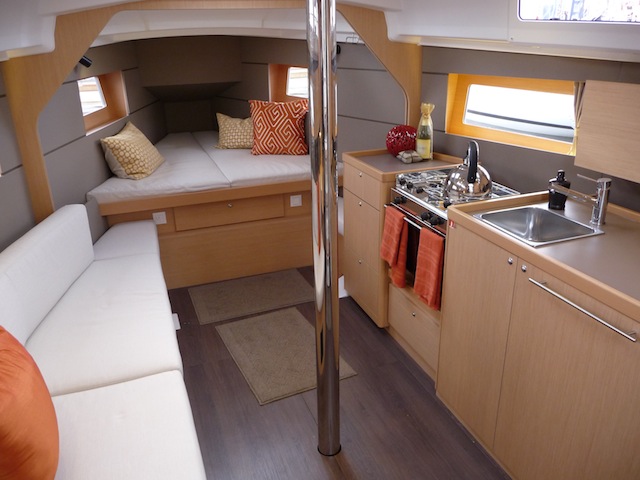 Like the 38, the Oceanis 35 is all about its unconventional versatile interior. Our test boat had the two-cabin Weekender layout, which we’re told is by far the most popular of the several options available. It features this super wide-open saloon space, plus one segregated stateroom aft that has a huge athwartship double berth 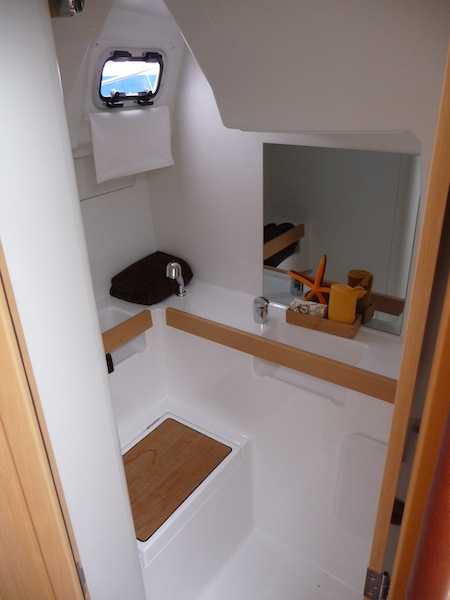 It also (drum roll, please) has a very large segregated shower room. Not a stall, a room. You could have a party in there!

You can look for more detailed reviews of these boats, plus our picks for this year’s Best Boats, in upcoming issues of SAIL magazine.