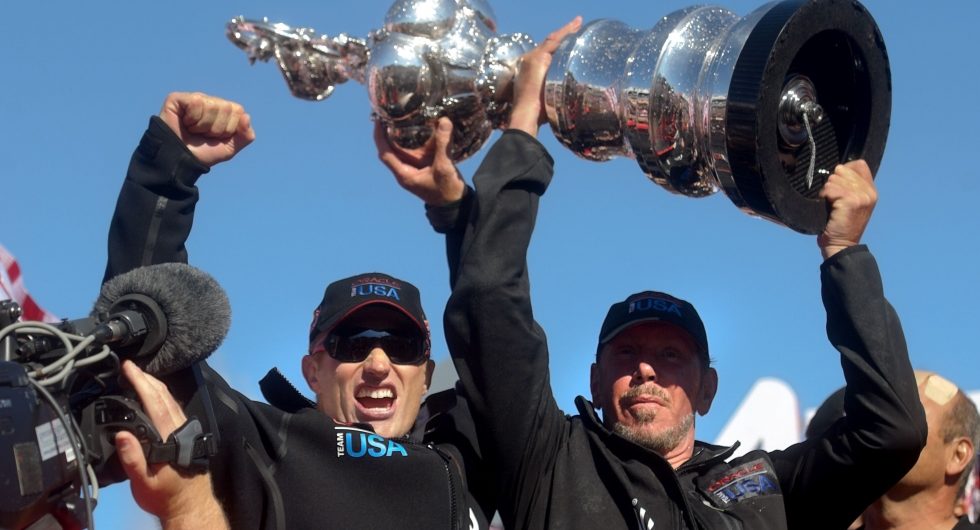 I was just pulling into a mooring field in Sebasco after sailing across Casco Bay from Portland, when I got a phone call from Phil “Snake Wake” Cavanaugh, who was somewhere in central Europe at the time, telling me that Oracle had just won races 17 and 18 and had forced a final race 19 to decide it all. I had been planning this last long outing of the season for weeks and wasn’t about to let Cup fever thwart it, but I was willing to stay over a day in Sebasco so I could watch the last race in the bar at the little resort there.

Of course, all Phil wants to talk about (now and then) is how wrong I was in picking the Kiwis to win way back when. And that’s cool. I’m very glad I was wrong, because I’m sure I won’t ever see anything like this again in my lifetime.

The thing about the America’s Cup, of course, is that the soap opera never stops. Rumors are now flying that Oracle had some potentially illegal automatic foil trimming system on their boat and that Team New Zealand will seek to void their victory. (Given Oracle got caught cheating in the AC World Series this seems almost inevitable, doesn’t it?) And Larry Ellison has announced that he has received a formal challenge from the Challenger of Record for the next Cup cycle, but he won’t say who it is. And, of course, there’s been all sorts of wild speculation about what sort of boats should be used next time.

There have also been estimates flying around as to what all this madness cost. These range from $770 to $830 million, with $450 to $500 million of that being spent by Larry Ellison alone. So the one thing everyone seems to agree on is that it has to be cheaper next time, with more affordable boats.

I will therefore offer one helpful suggestion. 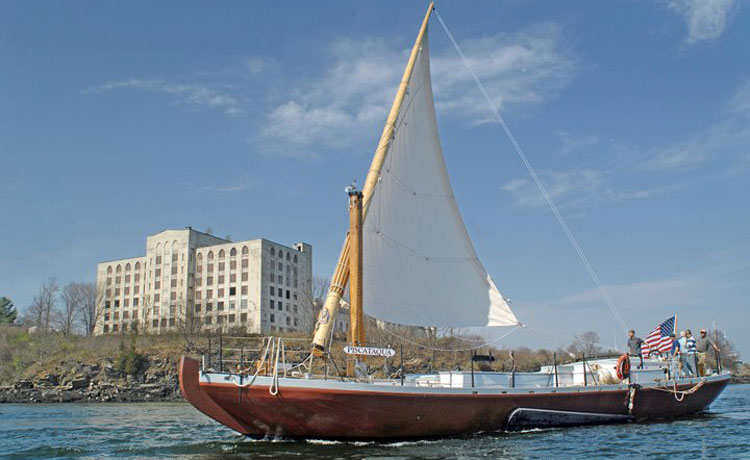 I propose that the next Cup should be sailed in gundalows right here in Portsmouth, New Hampshire. The course should run under several bridges, so the crews can show off their spar-dipping techniques. It should also be legal to use sweeps in light-air conditions.

We now return to the cruising blog I used to write. 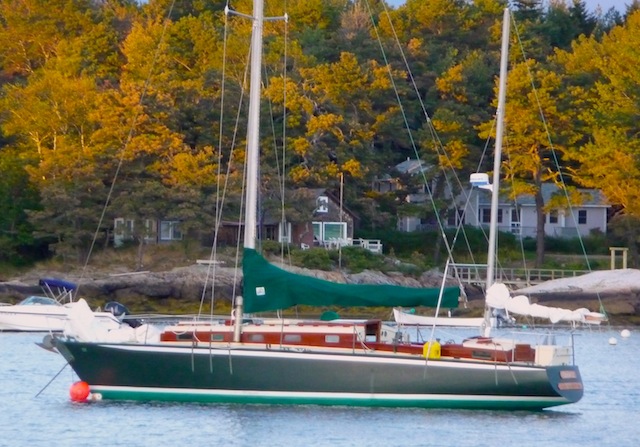 I saw this boat at Sebasco, which has been moored all season at Portland right near Lunacy, and had a brief conversation with her new owner in the shower. She is a Cy Hamlin Controversy ketch, strip planked in mahogany, built in Southwest Harbor during the 1970s. Note the reverse sheer and center cockpit, which were unusual features in those days. You can’t see it in this photo, but there’s also a very unusual rope reel mounted on the starboard sidekick that is used to handle the anchor rode. 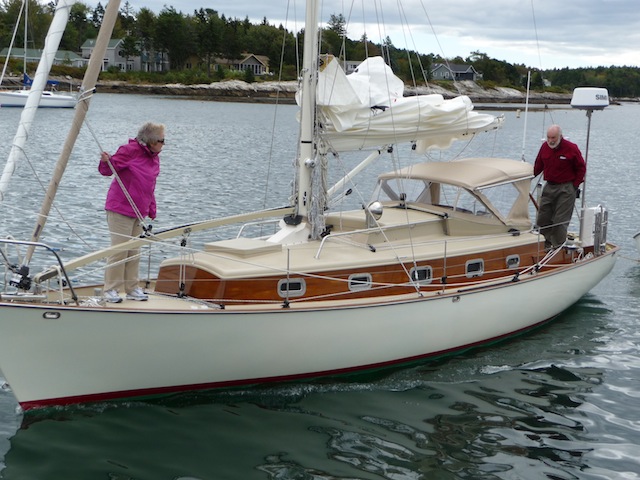 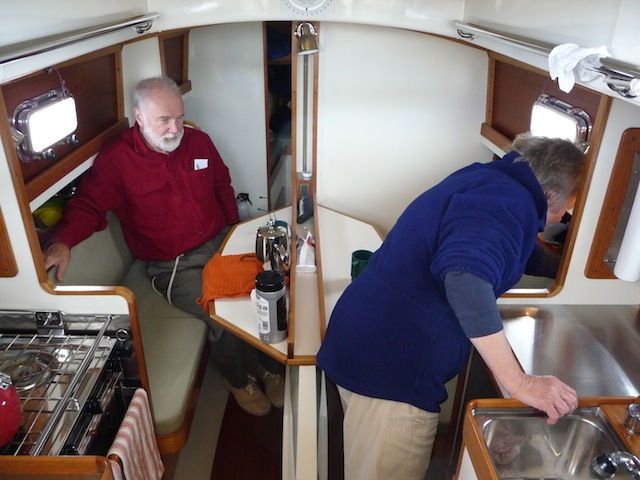 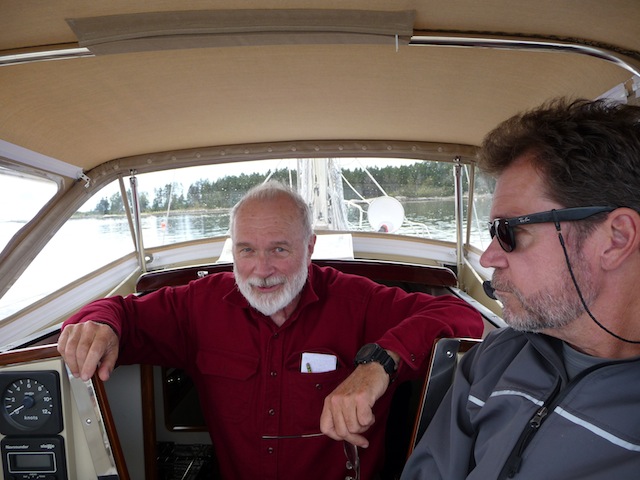 I also saw Jay Paris and his wife Phyllis, who came in aboard Petrel, their little centerboard cruiser that Jay spent over 30 years designing and building. They treated me to lunch aboard and later went ashore with me to watch Oracle complete their amazing comeback. 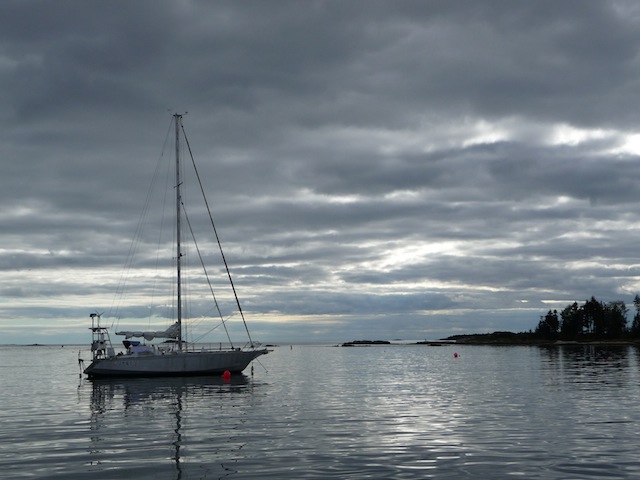 Immediately after the race I got a phone call first from Phil, who, yes, wanted to talk about how wrong I was picking the Kiwis to win, and then from my dad’s nursing home, telling me my dad had to be hospitalized.

So… that was the end of that cruise for now. 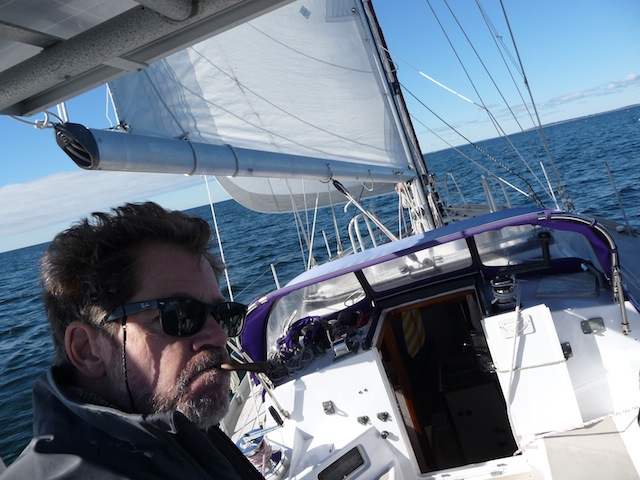 Here are videos of the last AC races, just so my collection here will be complete:

The key moment out of all of these, I think, is during race 18. Dean Barker finally wins a start again (starting at 1:12:40 in the second viddy), but then Oracle sails right over Team New Zealand going to windward (starting at 1:20:30), foiling easily and clearly demonstrating their superior upwind boatspeed. Which is the amazing thing about this whole series, how Oracle was so much slower to begin with and how much they managed to improve under combat conditions.

Major congrats to Larry Ellison, Russell Coutts, Jimmy Spithill, and company. (Unless, of course, you guys were cheating on the big boat, too, then I take it back.)