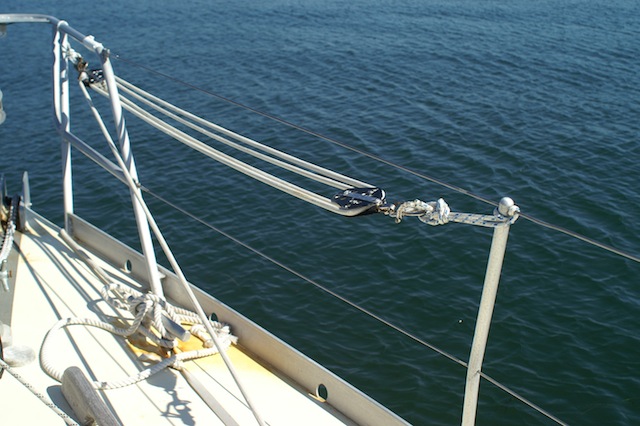 Having massaged the Insurance Gods to ensure the financing of more permanent solutions, I set out during my recent Solo Mini Cruise of Casco Bay to undo some of the damage inflicted on our poor Lunacy by the Big Bad Schooner Harvey Gamage. The ugliest bit, you may recall, was the bent forwardmost stanchion post on Lunacy‘s starboard side. The post is solid aluminum stock, perhaps an inch or more in diameter, so I knew it would take a Mighty Force (indeed) to make it more or less straight again.

A flash of inspiration rippled through my aging brain cells. Recalling the awful predicament of Bernard Moitessier, after the bowsprit on his steel ketch Joshua was bent in a collision with a freighter off South Africa during the legendary Golden Globe Race, I fastened a tackle to the injured post, fastened the other end to a strong point on my bow pulpit, then led the fall aft to a primary winch.

I quote from Moitessier’s seminal text in The Long Way:

The sea is still heavy in the morning, but the gale is over. At 2 p.m. the sea is all right again. The wind has dropped considerably, but there is enough filling the sails to keep us from rolling. I have prepared a large four-part block and tackle, with the spare mizzen boom to increase the angle at which the block pulls. I hinge the spar to the forward bitt with a shackle. No, that won’t do, another shackle is needed as a gimbal, so the spar can move both horizontally and vertically.

Good, that should do the trick. The spare staysail halyard serves as a topping lift. The rig is strong, and swings easily off the starboard bow. I run a 3/8-inch chain from the tip of the bowsprit to the outer end of the spar and secure the tackle opposite, with the line running back to the big starboard Goiot winch.


Incredible, the power of a tackle on a winch. I feel I am going to start crying, it’s so beautiful… the bowsprit begins to straighten out, very, very slowly. I am wild with joy!

In applying such wondrous force to my little crooked stanchion post I knew I was taking a chance. The weld that held the post’s socket to the deck had been cracked in the collision with the Negligent Schooner. (Likewise with the next socket back, though that post–thank God–is still more or less straight.) I did not want to wrench the socket clean off the deck, so I cranked on my winch very carefully. Took a few turns, strode forward to check on things, then took a few more. Carefully, oh so carefully. I shifted the end of the tackle from the top of the post to its midpoint and back a few times, and eventually achieved this result: 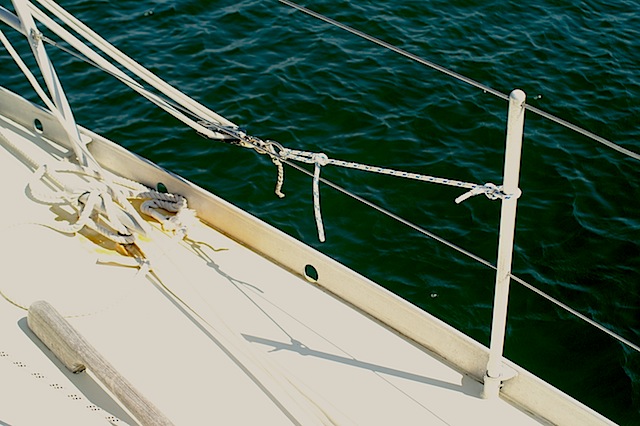 Not bad, I thought. And I hoisted a cold one in memory of Bernard.

The obliterated bow light was much easier to deal with. Here you see the destroyed part and its replacement: 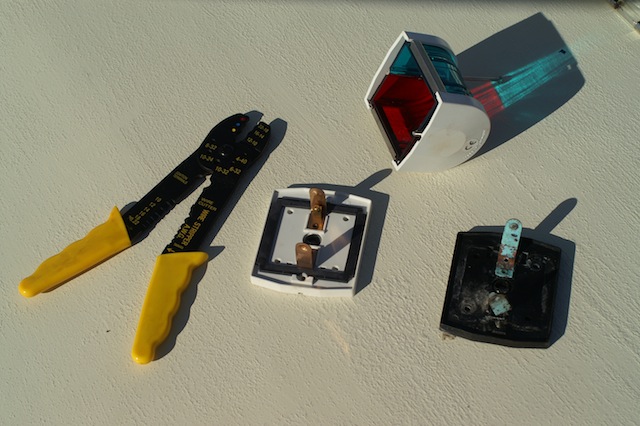 The tricky part here was connecting the wiring, as one lead was corroded solid into its connection inside the old bow light and had to be trimmed back a bit before it could be freed. Fortunately there was just enough slack left over to insert the shortened lead into the new light’s connector. But the next time this happens, I’ll definitely have more of a problem to cope with.

All this took place while at anchor one morning at Little Chebeague Island, not too far north of Portland. My other major project that day was an attempt to scrub Lunacy‘s very foul bottom. Donned a wet suit and weight belt and in I went.

Cleaned the rudder and prop and maybe a third of the rest of my lady’s nether regions, then I wimped out. I’m getting too old to muck around under cold water for too long. And man… I sure am wishing I had more effective bottom paint. The E-Paint ZO I put on a little less than a year ago is pretty much useless now.

More on the Mini Cruise in future posts. 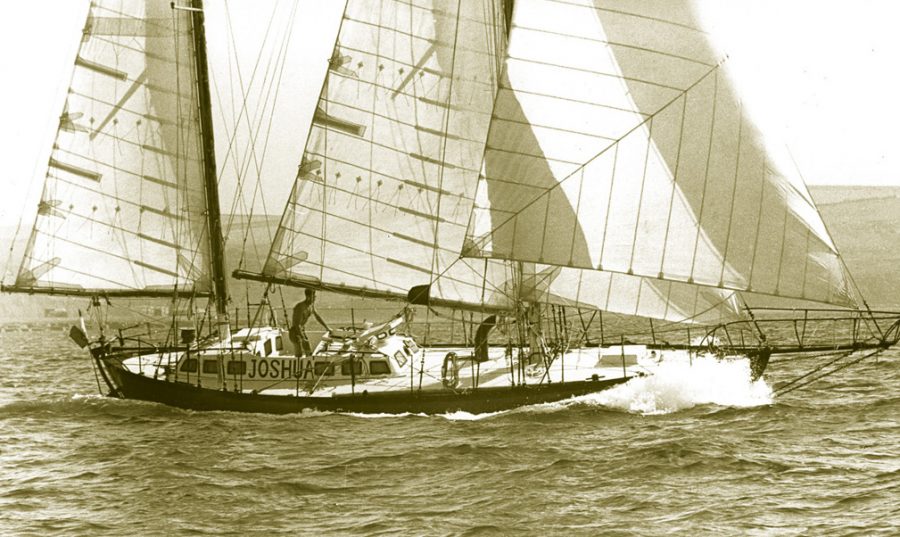