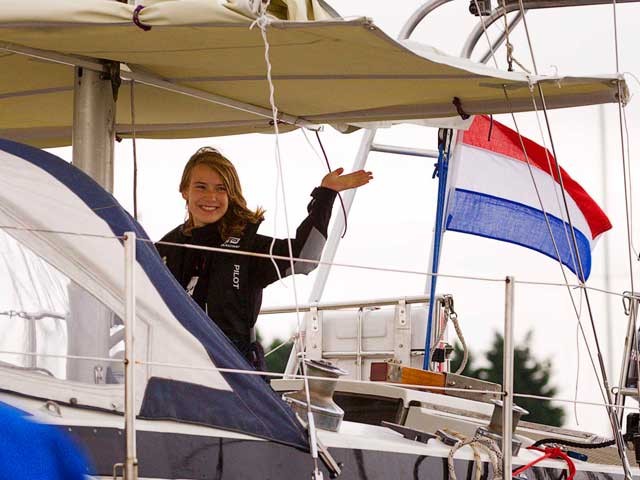 Here we go again. It’s getting so you can write these “youngest solo circumnavigator” stories just by filling in some blanks on a form. Except in the case of Laura Dekker, age 14, who set out yesterday from Den Osse, Holland, on her 38-foot Jeanneau Gin Fizz Guppy on a shakedown cruise to Portugal with her dad, you pretty much have to throw most of your teen RTW sailor stereotypes right out the window.

For one thing, I don’t really get the sense the record is what motivates her. I think all she really wants to do is go on a long bluewater cruise by herself. She was born on a bluewater cruising boat, she’s been sailing her previous Guppy, a 28-foot Hurley 800, on her own in the English Channel and North Sea since she was 11, and her parents genuinely seem ambivalent about her plans. (Her mom, Babs Mueller, was until very recently dead set against the trip, while her dad, Dick Dekker, decided to support her only after failing to dissuade her.)

Plus, of course, there’s been the intriguing legal twist of the Dutch government’s virulent opposition to Laura’s float plan. It took Laura about a year to wriggle free of the supervision of Dutch child-welfare authorities, an effort that took a very dramatic turn last winter when she ran away to St. Maarten and had to be dragged back against her will. As an American, of course, my knee-jerk reaction to this kind of government interference is that it’s none of their damn business. And I do believe that. But Dutch authorities did make Laura jump through some useful hoops: they made her get a bigger boat with better equipment, they made her undergo sleep-deprivation training and complete a first-aid course, plus they mandated more solo shakedowns. If nothing else, the bureaucratic attempt to thwart the teen’s dream, and the work she’s done to overcome it, has demonstrated that this is indeed genuinely her dream.

Really, but for Laura’s age, it is not at all an unusual one. She doesn’t want to sail solo non-stop in high latitudes in the Southern Ocean like Abby Sunderland or Jessica Watson. She just wants to go on a standard westabout Milk Run cruise around the fat, warm part of the world where the sailing is easy, stopping whenever she likes to check stuff out en route. Hundreds of other sailors–many, I’d wager, with considerably less experience than Laura–set out on similar voyages every year. Indeed, Laura was born on one of those voyages. In a sense, I’d say, what her dream represents is not a need to confront danger, but a longing to return to the security of the womb.

Laura does have a website now, but it’s pretty basic and (so far) is not well maintained. She also seems to have a few sponsors, but you’ll see there is very little signage on her boat. Her current plan is to depart solo from Portugal (for the Canaries and thence the West Indies) after she and her dad finish tweaking the boat a bit. She needs to return to Portugal by September 16, 2012, if she wants to break the unofficial record (for youngest around, as opposed to youngest around non-stop) that Jessica Watson set this past May.

Two years is, in fact, a bit quick for a proper laid-back smell-the-roses Milk Run cruise. So I wouldn’t be at all surprised if Laura blows off the record attempt and stays out a bit longer than that.

The best video I’ve found of the departure is here. No blah-blah-blah from some ignorant TV reporter. Just Laura and her dad quietly dropping lines and heading out to open water. You’ll note Laura is at the helm and looks quite comfortable there. The only pix I ever saw of Abby Sunderland looking comfortable on her boat were very blatantly posed.

PS: In perusing the mainstream media coverage about this, I find an unhealthy focus on the danger of encountering pirates in the Middle East. Has everyone forgotten there is another way to get around Africa westabout??? Beating around the Cape of Good Hope is challenging, but not horribly so. Plus, you get to spend time in South Africa, which is a very sailor-friendly place.