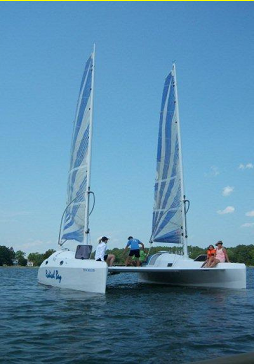 Ian Morse of Radical Catamarans has just launched his very first boat and, man, it sure is… radical. I’ve always been intrigued by this sort of parallel, or biplane, rig, so I had lots of questions for him when we talked the other day. He was, however, a bit tentative about some of his answers, as he still hasn’t figured out exactly how best to sail this thing. It’s been in the water just six weeks, and Ian’s been out sailing on it just six times, and the learning curve is still pretty steep.

For example: “We’re still learning how to tack,” he explained. “She comes around very easily when the boat is lightly loaded. But it’s much harder when we have a lot of people on board. One trick, I’ve learned, is you have to turn the boat slowly through the wind. You really need to minimize the drag created by the rudders.”

Another thing Ian’s playing with is headsails, one on each mast. Though the boat is designed to sail primarily under just its twin mainsails, Ian has found it is markedly faster, in both light and stronger winds, with jibs up front. His current plan, when he finally introduces this 26-foot coastal cruising speedster at the Annapolis show in October, is to offer the boat with twin jibs that furl on their own luffs as an option.

The basic idea of the biplane rig has been around for a while, understandably so, as it makes a ton of sense. By far the biggest structural challenge in engineering a conventional “monoplane” catamaran is supporting the enormous compression loads imposed by the mast on the middle of the main beam between the hulls. By splitting the rig onto two freestanding masts planted in the hulls, loads are greatly reduced and are shifted off what is inherently the weakest part of the boat and on to the strongest parts. The structure connecting the hulls can thus be much lighter. On the Radical Bay 8000, for example, all that is needed between the hulls are three light aluminum tubes. This (among other things) makes the boat easy to disassemble for trailering.

Quite a few one-off biplane cats have been built over the years. Several have been hot high-performance machines, like Crossbow II, the 60-foot cat that set the world sailing speed record back in 1980 (36 knots, which stood for six years until it was finally topped by a wind-surfer), and Team Phillips, the ill-fated 120-foot super cat that Pete Goss put together for The Race in 2000, which ultimately fell apart and broke up at sea during a shakedown passage. 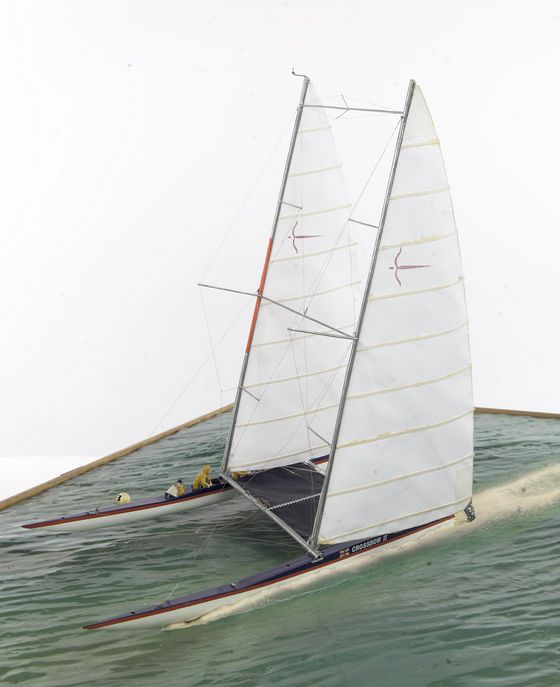 Several others have been home-built cruisers, like Pete Hill’s 38-foot junk-rigged biplane cat China Moon (the building of which, as I understand it, had something to do with the dissolution of his marriage to author Annie Hill) and Gary Lepak’s similarly junk-rigged “Dragon Wings” design.

What’s truly radical about Ian Morse’s boat is that he proposes to build it on a production basis. As far as I know, no one’s ever done this before. And in speaking with him, I was truly surprised by the extent to which he’s flying by the seat of his pants and just figuring stuff out as he goes along.

Ian got interested in the Radical Bay 8000 design at arm’s length and decided to start building it without ever sailing one, though he did first conduct some tests by putting a pair of wind-surfer sails on a Hobie beach cat. The boat’s designer, Australian Jeff Schionning, already sells it in kit form to home builders, and the kit consists of a series of pre-cut balsa-cored glass panels that are glued together. Ian purchased some plans, built Hull No. 1, fabricating all the panels himself, and has used No. 1 as a plug for a female mold from which he’ll pop more boats with resin-infused Corecell-cored hulls.

Along the way he’s tweaked the boat in significant ways. His current experiment with twin jibs is just one example. He has also replaced the fixed booms specified by Schionning with wishbone rigs (an idea he got from sailing aboard the Presto 30 at the Miami show last February) and has worked out a new way to control the booms and the shape they impart to their sails with forward-facing mast tracks instead of choker lines. He’s also looking ahead to perhaps developing a spinnaker of some description that can be flown between the masts.

So far Ian is quite pleased with his boat. He’s seen boat speeds nearly equivalent to wind speed in light air and has averaged 10 knots plus sailing in 15 to 17 knots of breeze. Max speed while surfing so far has been over 14 knots, and Ian thinks all these numbers can be significantly improved once he truly gets the hang of sailing the boat and gets his headsails sorted out. (Note that Jeff Schionning claims the boat’s top potential speed is actually around 20 knots.) Ian’s also found that the boat’s structure is much stiffer than he expected, given the slender cross-members, and that it is uncannily stable, thanks to the low center of effort of the split rig, which is distributed both to windward and to leeward.

Accommodations, for those of you interested in such things, are unavoidably minimal. As you can see here, the narrow asymmetric hulls, each of which is fitted with a daggerboard, have little room for interior amenities. The exterior space between the hulls, meanwhile, is all net, save for one thin solid strip of laminate set between the center and aft cross beams (though a totally solid bridgedeck can be specified if desired). 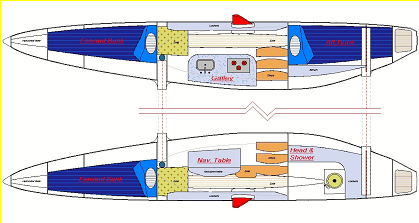 This is not a boat for lazy cruisers who are married to comfort; it’s for the edgy ones who want to sail fast and live simple. I, for one, look forward to exploring the concept in more detail at Annapolis in the fall.

(Note: If you love this idea, but must have more boat, be advised there is a new 34-foot Radical Bay 1060 design by Jeff Schionning that Ian also hopes to produce in the future.)