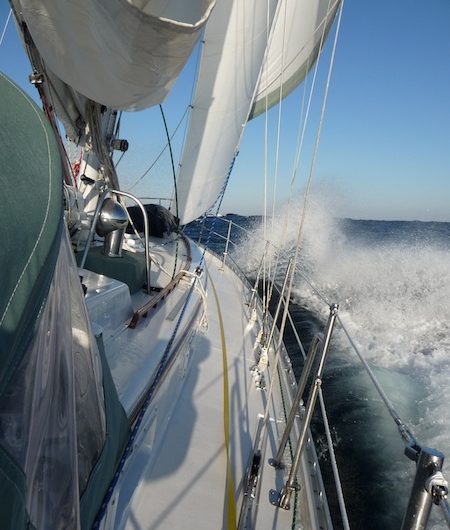 Just back from helping from helping me mate Jeff Bolster sail his Valiant 40 Chanticleer down to Norfolk, VA, from Newport, RI. This being phase two of his four-step campaign to take the boat down to the West Indies for the winter (phase one having been a short jaunt from here in Portsmouth, NH, down to Newport, accomplished by he and his bride Molly). Jeff, you may recall, bought this iconic fiberglass cruising machine–the boat that in many ways made Bob Perry as a yacht designer–just last summer. Immediately afterward he managed to do a pissload of work on it, including repowering it, before taking it down to the W’Indies and back last season.

We left Newport Friday morning, after a cold front barreled through, and carried the post-front northwesterly, which had much more west than north in it, out Narragansett Bay, past Block Island across the mouth of Long Island Sound, and out past Montauk into the ocean proper before sunset. Friday night was a real shitfight. The wind at least cranked a bit more northerly, so we had it almost on the beam, but it blew hard–30 knots with gusts to 35–and the sea was ungodly.

And, of course, it was bone cold.

But we were fast, slamming through those seas like a hammer, and were well past the yellow-brown loom of New York City to the north before the sun rose on Saturday… after which, thankfully, the wind started easing.

We had a lost shore bird come aboard that morning, a BLUB, as I sometimes call them (Brown Little Unidentified Bird), that had been blown off the land in the night. The poor creature was most thoroughly exhausted. It could barely maintain any altitude at all and twice fell into the sea as it struggled to catch up with us. Finally, it made it up to the cockpit and landed on Jeff’s arm. 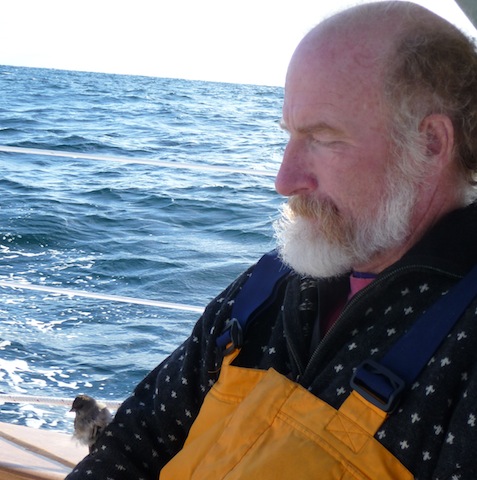 I’ve often seen shore birds come aboard when sailing offshore, and they almost never survive. If they are not afraid of you, it seems they are certain to die.

This bird explored the deck and cockpit for a bit, then went below and made itself at home. It spent all the rest of the day flitting about the cabin–sitting on the potrail on the stove, flying up to the forepeak and back, trying to nestle down on the heads of off-watch crew–and seemed to be regaining strength. Eventually, it flew down into the galley sink and starting sipping from the little puddles of fresh water it found there. Then it started eating the crumbled bits of cracker we put out for it. 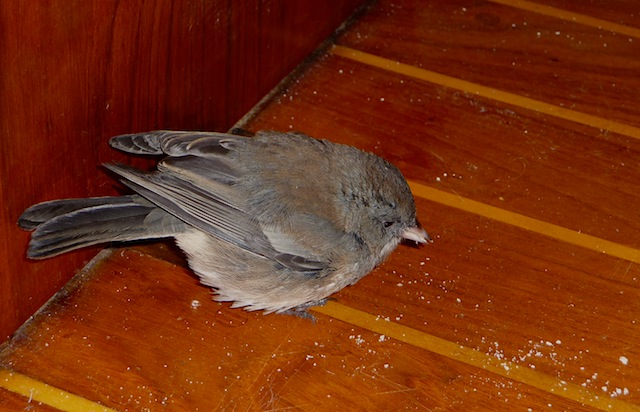 I have often offered food to lost birds at sea, but I had never seen one accept any before. So maybe maybe maybe, I hoped, this little guy would make it back to shore with us. 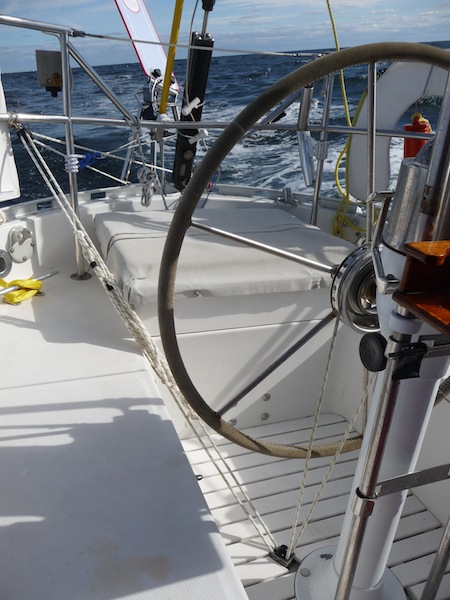 Jeff, ex-pro schooner jockey and wood-boat aficionado, is a Luddite and proud of it. He considers his new Monitor windvane to be Advanced Technology. What you see here, with control lines led to the aft pulpit rail, then to the cockpit sole, and thence to the drum behind the wheel, seems to be the standard installation for Valiant 40s

Meanwhile, the wind went uncooperative and backed to the southwest, dead against us. Our course deteriorated accordingly and took us further and further away from the land. The forecast was for yet another cold front to come through, with the wind veering back into the northwest after it passed, and Jeff’s fervent hope was that we could just keep sailing south-southeast until the shift came. Then we would recurve neatly back towards shore and arrive at the mouth of Chesapeake Bay.

By the time sun went down, however, it seemed clear (to some of us, at least) that the shift would never come in time. Sometime before midnight, as I lay suspended half-asleep in my leecloth, I overheard our other crew member, young Matt Glenn (himself a professional mariner, and skipper of the historic gundalow Piscataqua back in Portsmouth) arguing with Jeff that the correct “resolution” to our destination was to tack back west.

And when I finally crawled out of that leecloth at 0100 for my watch, I put it more bluntly: “I cannot believe we are still on this tack.”

Jeff is stubborn and opinionated, but he is not stupid. So we tacked over at last and began tracing out a very dispiriting northeast track on the chartplotter, seemingly right back where we came from. 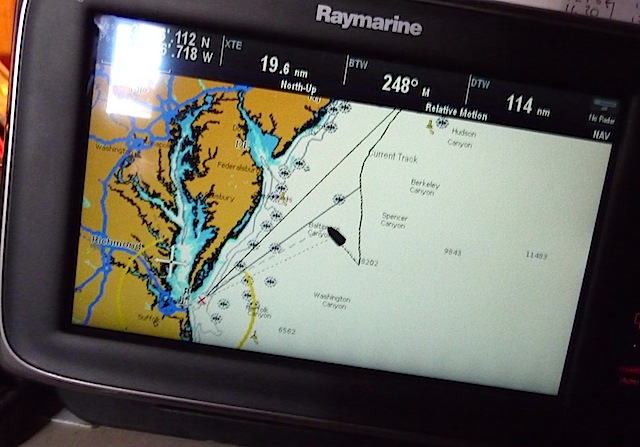 This is Jeff’s first chartplotter, newly installed. He doesn’t trust it one bit

The next morning, Sunday, came fine with moderate to strong (if contrary) wind and bright sunshine. Our little bird, unfortunately, did not reappear from whatever nook or cranny it had found to sleep in, and we guessed it must have expired during the night. Outside there was a great cloud of sea birds all around us, hundreds of them, gulls, shearwaters, and skuas all mixed up together. Which seemed unusual… one often sees individual birds swooping about the ocean, but not big flocks like this, unless they are following a fishing boat.

Chanticleer (the term, if you are wondering, is a synonym for “domesticated male chicken”) smashed on through the contrary sea, sending up great sheets of spray on her lee bow. Behind each sheet was an instantaneous rainbow as the sunlight shot through the water in the air. Each instant was achingly beautiful, as was the vast exaltation of birds soaring all around us, and it seemed to me they had come to honor the little one that had died onboard.

Eventually the flock dissipated, and we slogged on all the rest of the day, heading at a near perfect right angle away from our destination. Amazingly, at the end of the day, the northwest shift came just as we crossed our original rhumbline route to the Chesapeake. So we tacked over once again, trimmed out for a reach, and roared through the next night right down that rhumbline to the entrance of the bay.

Jeff, it seemed, had timed our first tack perfectly after all. 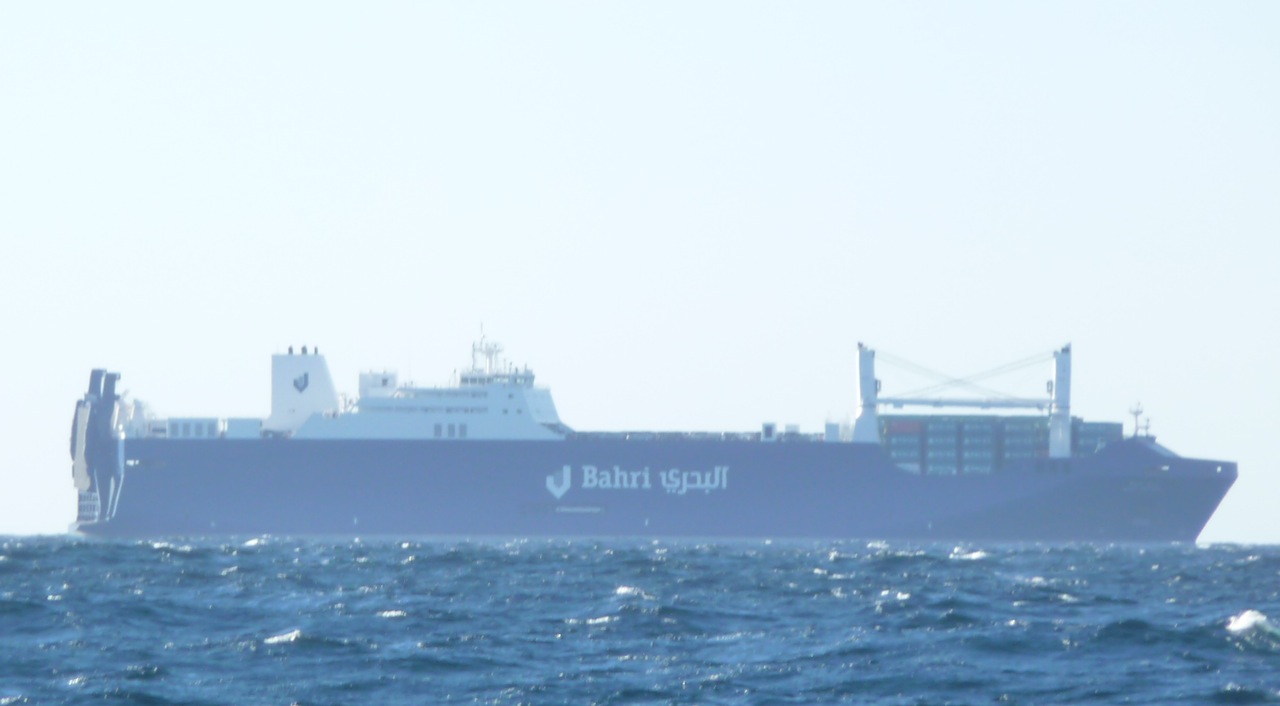 One thing we saw as we stood in toward Cape May on Sunday were various large ships anchored or drifting about way offshore, evidently waiting to enter Delaware Bay. This one was anchored out in 250 feet of water 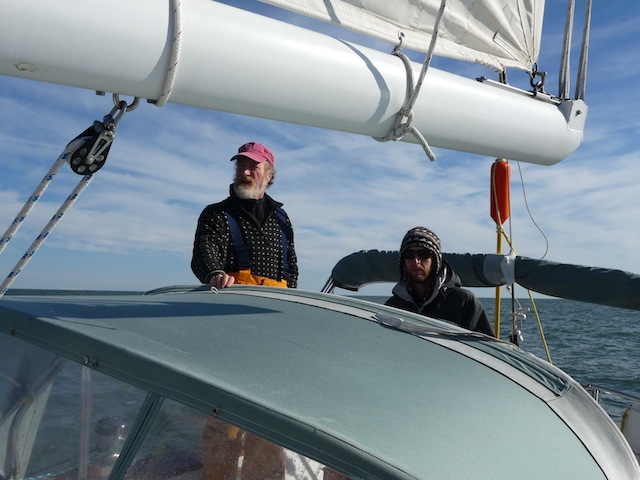 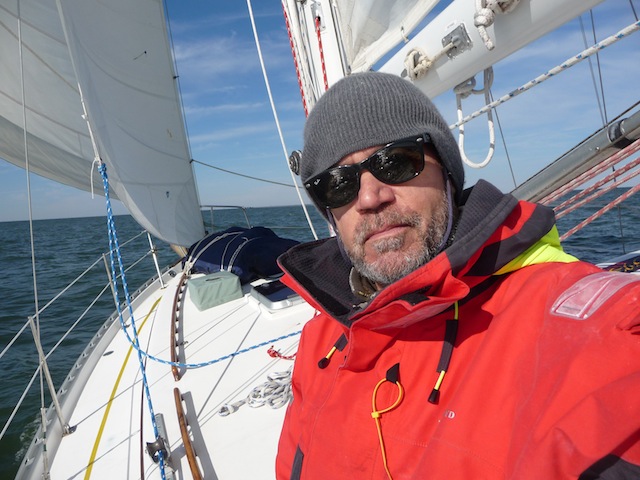 Your humble narrator on the deck simultaneous 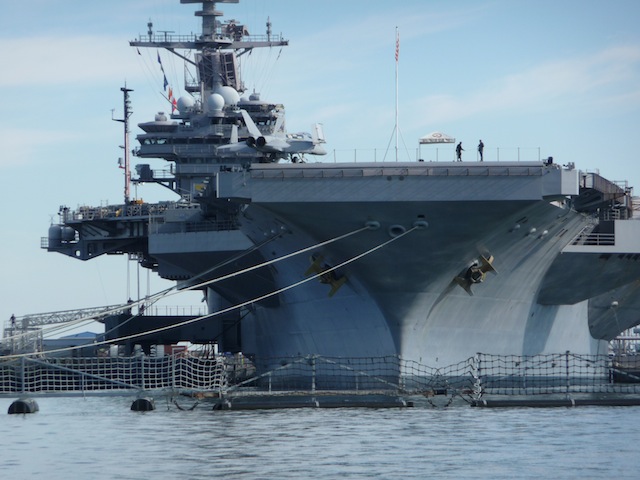 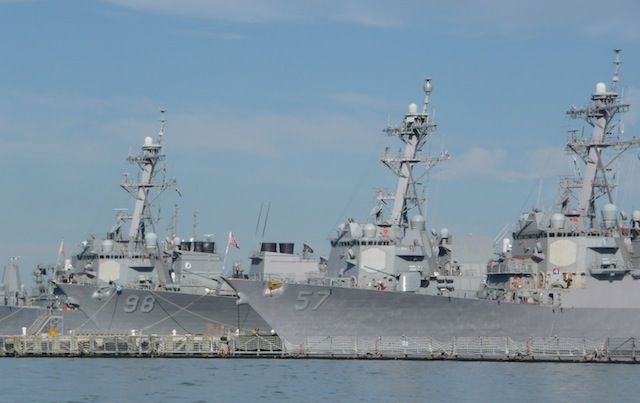 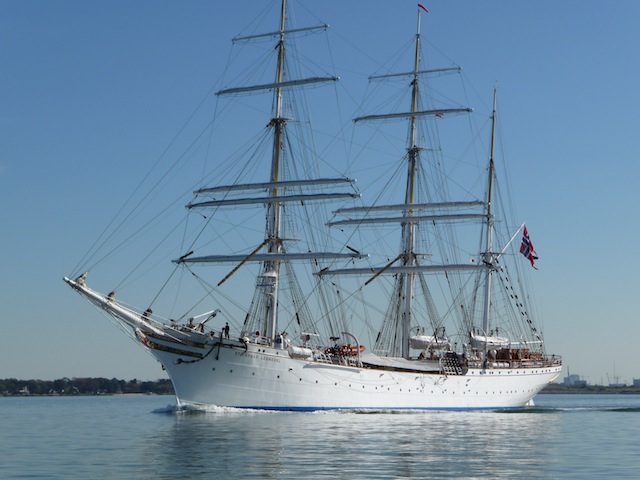 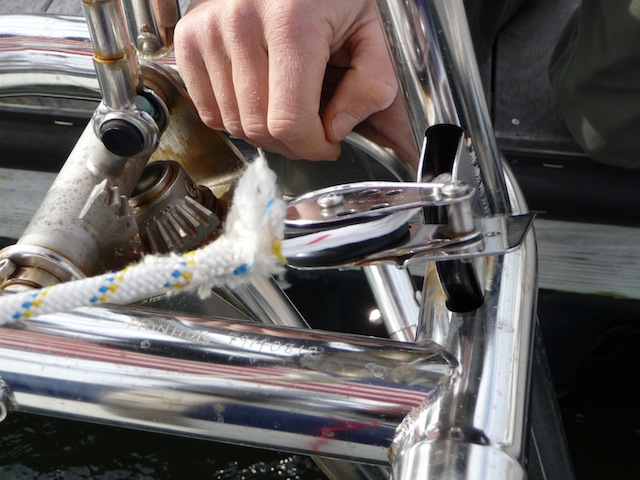 Annoying problem here. We chafed through the cover on the Monitor vane’s brand new control lines in just 350 miles of sailing. Set the lines too loose and they jump off the drum on the wheel when conditions are rough. Set them too tight and this happens. Jeff needs to resolve this issue. Negotiations with the manufacturer are underway 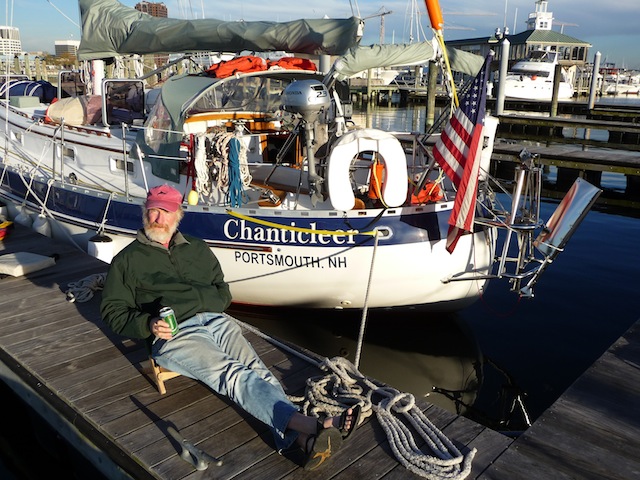 We tied up at the Tidewater Yacht Marina in Portsmouth, across the river from downtown Norfolk, at Mile 0 of the ICW. Jeff, previously contemptuous of people who keep boats in marinas, is now learning to be a marina rat himself. As you can see here, he has all the necessary skills. He and Molly will return later this month to take the boat from here down the ICW to Beaufort, NC. In December they’ll take it from Beaufort offshore to the W’Indies 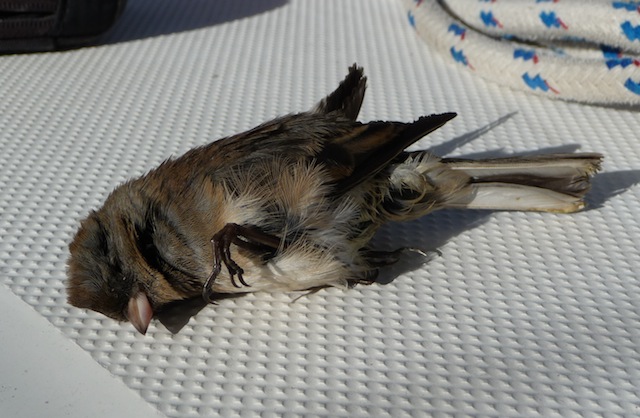 The mortal remains of our poor BLUB, exhumed from the forepeak during post-passage cleaning

VALIANT 40 IMPRESSIONS: I sailed this boat with Jeff on a coastal passage last year, but this was my first offshore passage on a Valiant. Chanticleer was fast, easily driven, with a seakindly motion: we were routinely moving at 6-8 knots, in spite of having the mainsail double- or even triple-reefed most of the time. Our top speed was over 9 knots.

I perhaps have been spoiled by my boat Lunacy, but I did not like the forward position of the head. In rough conditions it is a most unpleasant place to be. I also didn’t like the cramped, steep companionway. For a tall guy like me, the transition between cockpit and cabin was awkward. The cockpit and interior otherwise were most comfortable and seamanlike.

UPDATE: I am informed that Hans Bernwall, owner of Scanmar International, which manufactures the Monitor vane, contacted Jeff immediately on reading this blog. Scanmar is sending Jeff a new set of control lines gratis and are working with him closely to solve the chafe problem. Good on ya, Hans!