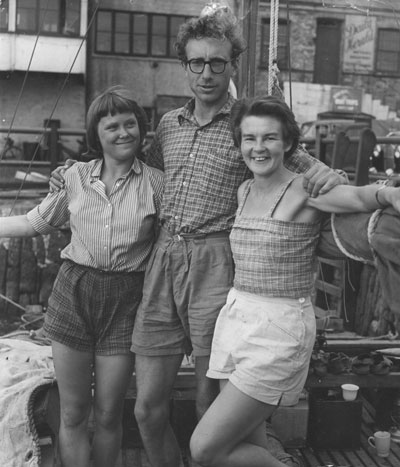 Another multihull pioneer bites the dust. Unfortunately, I just received an e-mail this morning from Hanneke Boon, Jim Wharram’s design partner, regarding the passing of another of Jim’s partners, Ruth Wharram, who crossed the Atlantic and back with Jim and Jutta Schultze-Rohnhof (see photo up top) back in 1955-58 on the catamarans Tangaroa and Rongo. She always played an integral role in the development of Wharram’s career and business and was an accomplished ocean sailor.

Wharram, in his classic memoir of his early voyages, Two Girls Two Catamarans, described Ruth as a very important influence right from page one:

Woman-wise I had to learn too. There was a series of love affairs before I appreciated to the full the old saying: “A man needs nourishment, not punishment.”

I began to get nourishment from the moment I met Ruth, a German girl mountaineering in the Lake District. She stood wholeheartedly behind my dream-world. She came from a wealthy German family, but had seen or heard the effect of two world wars on the family security. She knew the only real security in life is the security of inner contentment and happiness. 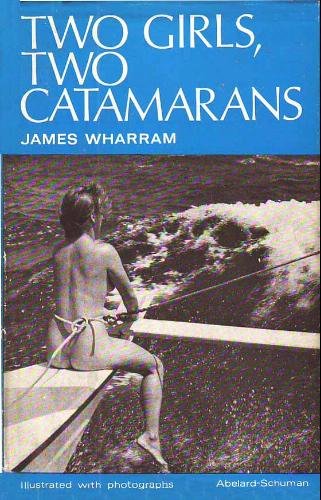 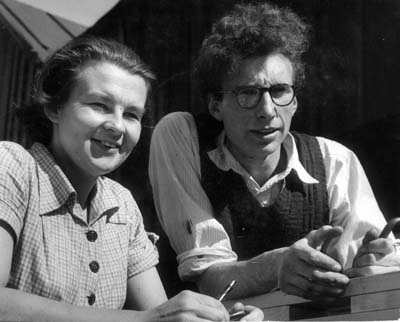 Ruth and James in their younger days 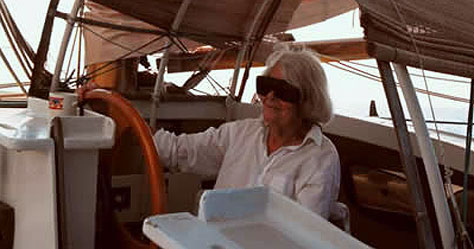 Ruth at the helm of the Pahi 63 Spirit of Gaia

Here is Hanneke’s announcement in full:

Ruth Wharram has gone to join the navigators in the sky

I’m very sad to announce that Ruth Wharram (née Merseburger) has departed this life in the early morning of 4th September, at the age of 92, at home in Devoran. Her health had been failing over the last two years after a stroke the day after a fantastic 90th Birthday party.

Ruth has been a great strength in our lives; ever since she met James Wharram in 1951 she has guided and supported him in his life’s efforts. I first met Ruth in 1967 and have shared my life with James and her since 1973. She has been a great friend to me and close ally in all the work, travelling and sailing we have done together.
She never had children herself, but during her life she has been ‘mother’ to Jutta’s son Hannes and ‘grandmother’ to my son Jamie.

She was a great ocean sailor, sailing with James and Jutta on their pioneering catamaran voyages across the Atlantic in the 1950s, then more Atlantic crossings with Tehini, and on Spirit of Gaia, when she was already in her 70s, she voyaged half way round the world. Other friends invited her to join them on their boats, mostly Wharram catamarans, but also other boats, even a monohull. Thus she crossed the Tasman Sea and made more Atlantic crossings. She was a skilled navigator, managing to find her way across the Atlantic on their first voyage with just a pocket watch and valve radio. Later she was an expert at navigating by sextant in the days before GPS. Besides this she was also an eager photographer, doing her own darkroom work and she filmed the building of Tehini on a hand-wound Bolex cine-camera.

She wrote articles about her sailing ventures, which inspired others to try the sailing life. As a pioneer woman ocean sailor and navigator she was an inspiration to many other woman sailors that followed in her wake.

Since 1980 she ran the Wharram office, communicating with customers all round the world, often writing letters late into the night. The big family of Wharram catamaran owners and sailors was her world; she was ‘mother’ to them all. Whilst writing at her desk she would be listening to classical music on Radio 3.

She only slowed down in this work in her mid 80s, when two knee replacements and a broken thigh made her no longer able to travel easily, but she then learned to use a computer and she started to keep in touch with her friends by email, she was also able to follow James and myself on our Lapita Voyage via Internet. This unfortunately came to an end by a stroke at the age of 90, which deprived her of the ability to read and affected her memory.

She had a second stroke last May and after spending 2 months in hospital she was desperate to come home. She has been at peace here and has said her farewells to all her close friends.

We all loved her dearly and will never forget her.

Ruth’s funeral will be on Friday 13th – a propitious date in the pagan calendar, dedicated to the goddess.