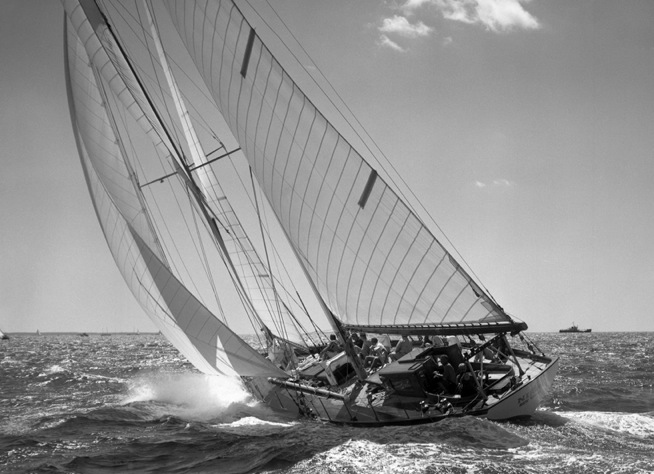 Thanks to a heads-up from WaveTrain rider Gareth Hughes I’ve been following this story over the past several days on the Cruisers Forum. I didn’t write anything, however, as I thought the missing boat would soon show up. Now that seems increasingly unlikely, and it would appear that the fabled 59-foot schooner Nina, winner of the 1928 Transatlantic Race to Spain, the 1928 Fastnet Race, and the 1962 Newport-Bermuda Race, among others, has gone down with all hands somewhere between New Zealand and Australia.

Nina left Opua in the Bay of Islands bound for Newcastle, Australia, on May 29 on what was expected to be a 10- to 12-day passage. The last voice contact was on June 3, when meteorologist Bob McDavitt gave her crew weather-routing advice via sat phone. Their position at the time was about 370 miles west of New Zealand. The following day McDavitt received a text message asking for an update, and nothing has been heard since. Following three days of unsuccessful aerial searches over this past week, Kiwi SAR authorities have reportedly stated it is “logical to assume” the schooner sank. The crew of seven included the owner, David Dyche, 58, his wife Rosemary, 60, their son David, 17, a family friend, Evi Nemeth, 73, and three others, two men and one woman, who have not been identified. When last heard from, Nina and her crew were caught in a gale with winds blowing from 43 to 60 knots. 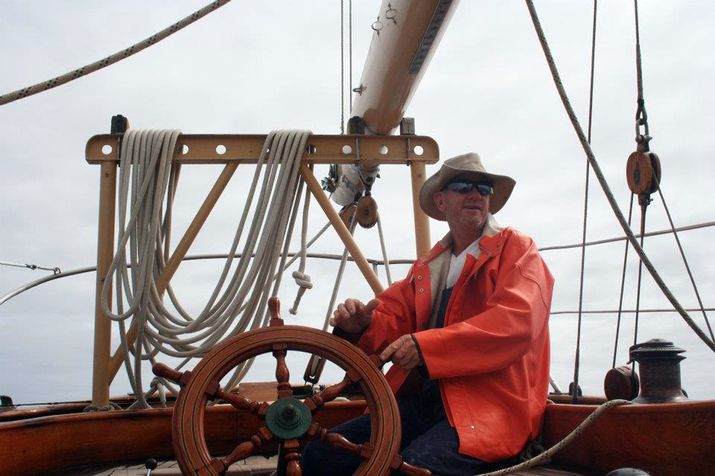 Owner David Dyche at the wheel of Nina

I’ve been struck by the mainstream media’s great interest in this story and can only assume it is because of Nina‘s age and pedigree, as all accounts seem to refer to her as a “classic” and/or “historic” vessel. She is all that and more, and as sailors we should remember her (if it comes to that) more explicitly.

These days we all cite Olin Stephens‘ famous yawl Dorade as the boat that transformed ocean racing and modern yacht design in the early 20th century, but really that was a process that started with Nina. Prior to Nina, ocean racing was dominated by much more conservative gaff-rigged “fisherman” schooners, many of them designed by John Alden. Nina, designed by W. Starling Burgess for Paul Hammond, retained a schooner rig, but flew a huge Marconi main with staysails forward, and her hull was narrower and deeper with a more swept-back keel than Alden’s more traditional hulls. Also, her construction was light for the time, and her masts were hollow. Most particularly, she was much more closewinded than traditional schooners, which is how she won the race to Spain.

When we finally made landfall on Spain, Nina was way down on the horizon behind us. Then the wind died and came out dead ahead. The best an Alden schooner, gaff rigged, could make on the wind in that light going was six points, while Nina was doing four and a half. It almost broke our hearts to see Nina go by us to windward almost within sight of the finish. 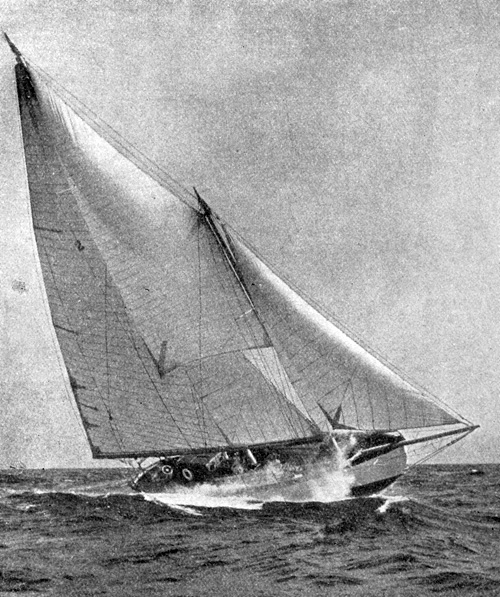 Nina, seen here flying her original rig, was described by some as a “two-masted cutter.” Her mainmast is nearly amidships and her formast is so short her triatic stay is in a straight line with her forestay 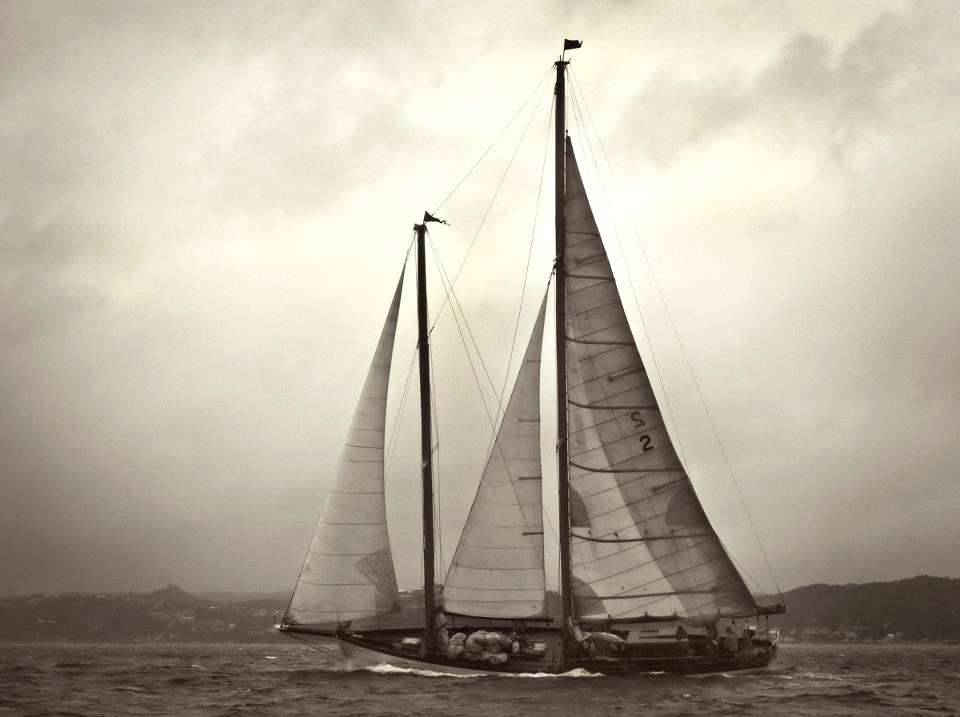 Later in her career Nina was given a taller foremast, seen here

In the end Nina beat Pinta by 29 hours. Later that summer, when she lined up for the Fastnet Race at Cowes in England, she was considered so radical there was serious discussion of banning her from the fleet. Conditions favored her–light headwinds–and she won that race, too, by a margin of over nine hours. 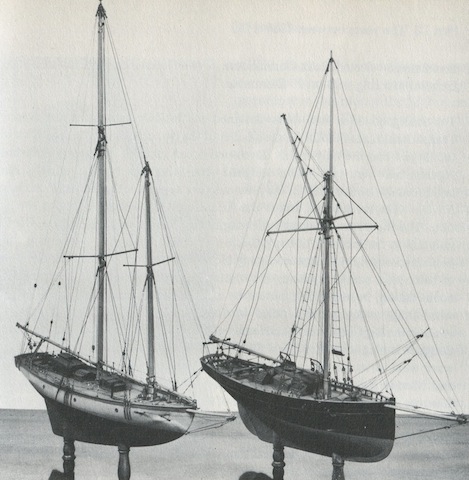 A model of Nina side by side with a model of the cutter Jolie Brise, which corrected out to second place in the ’28 Fastnet Race. The blatant differences between these craft should give some idea of why the Brits thought it unfair for Nina to race

For much of her career Nina belonged to DeCoursey Fales, a commodore of the New York Yacht Club, and served for a time as the club’s flagship. Fales was her owner when she won the 1962 Bermuda Race at age 34, thanks to two massive gollywobblers she carried in her sail inventory, which were known respectively as “the Monster” and “the Grand Monster.” Fales at the time was himself age 74, and there was much ado in Hamilton, as you might imagine, over the fact that the race had been won by the oldest boat and skipper in the fleet. 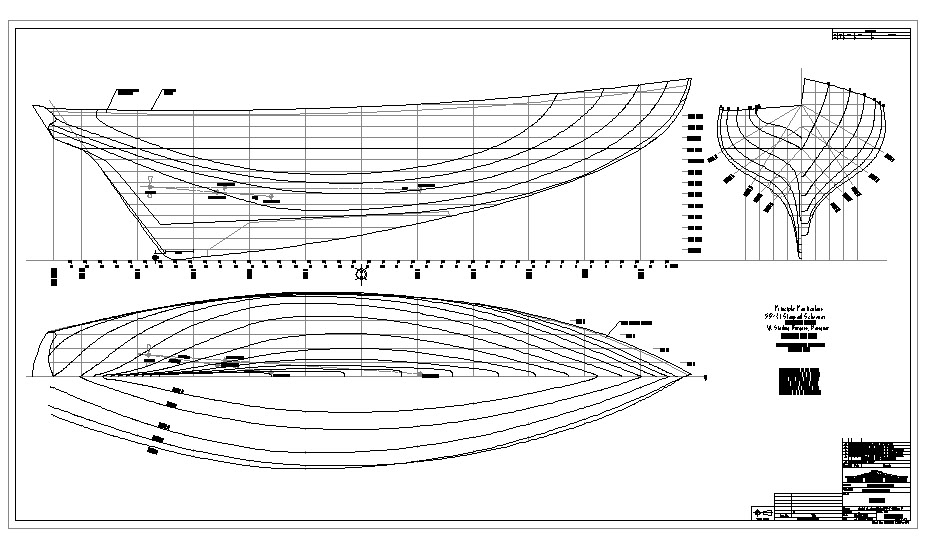 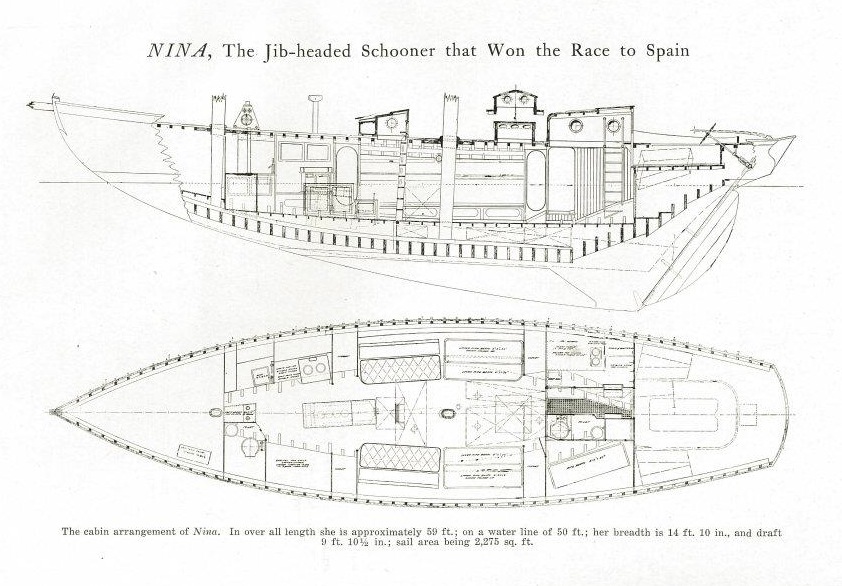 For the past couple of decades Nina has belonged to the Dyche family, who, by all accounts, have maintained her carefully and have sailed her well on a long series of bluewater cruises. Here you can see her in action in a video made by one starstruck crew member during a passage to the Azores in 1992:

There is still some hope she and her crew will reappear soon–we can only pray this will be the case.

UPDATE (July 4): One story I’m seeing early this a.m. claims another text message, delivery of which was delayed, was received after Nina survived the gale of June 4. This message allegedly said the schooner’s sails were damaged, but that she was still making progress. Kiwi SAR authorities are searching a new area today. The formerly unidentified crew are Danielle Wright (18), Kyle Jackson (27), and Mathew Wootton (35). All onboard but Woottoon, a Brit, are U.S. citizens.

UPDATE (July 11): Pls. note I’ve changed one photo here, the third one, pursuant to a comment below. Still no word or sign of Nina and the search for her has been suspended. The situation seems quite bleak, I’m afraid.