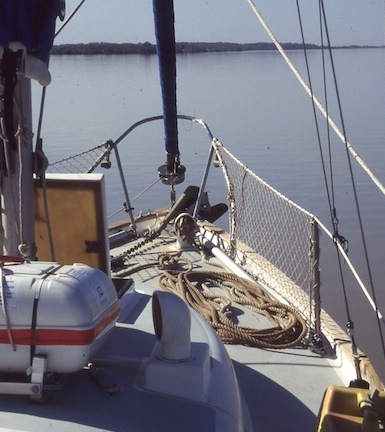 I didn’t come up with this idea myself. I learned it crewing for a guy down in Florida who always stored not one, but two rope anchor rodes on his foredeck while cruising. Even on offshore passages he kept them out there, with the coils of rode lashed to stanchion post bases, and never had any problems.

The big advantage of doing this, if you have a boat with a belowdecks rode locker rather than a modern anchor well, is that it saves you the bother of somehow getting all the rope down the hawsehole. Chain is heavy enough that it will just fall down there on its own, but rope wants encouraging. Either you need a crew member below pulling the rope down into the locker as you raise your anchor, or you have to shuttle back and forth between the foredeck and locker doing it yourself.

If you’re cruising somewhere with lots of sticky (or worse, stinky) mud on the bottom, storing your rode on deck also keeps all the mud that clings to your rode out of the interior of the boat. Unlike a chain rode, which can be quickly rinsed off as it comes aboard, a rope rode tends to want to stay attached to its mud, at least as long as it is wet. Much of the mud will fall off after it dries up and turns to dirt, and if the rode stays on deck, the dirt will too.

I don’t like stinky and/or icky anchor lockers, so when I was cruising on Crazy Horse, my Alberg 35 yawl, which I always anchored on rope, I often kept my rode on deck when cruising up and down muddy rivers and creeks (see photo up top). Like my old skipper in Florida, I just kept it in coils on the foredeck. 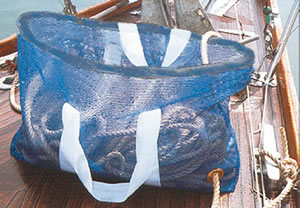 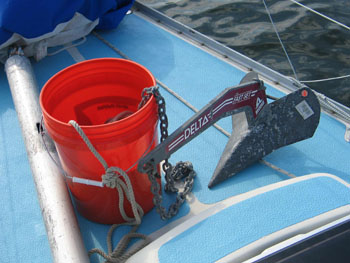 If you don’t like the idea of keeping loose coils of rope on deck, you can trying storing your rode in a bag or bucket. I always like to store a spare rope rode this way, as it makes it very easy to deploy when you need it. If you have two anchors out, having at least one of the two rodes in a bag or bucket also makes it much easier to disentangle things when the rodes end up twisted. Just uncleat the rode in the bag or bucket, pass it in its container around the other rode however many times is necessary, and you’re done. 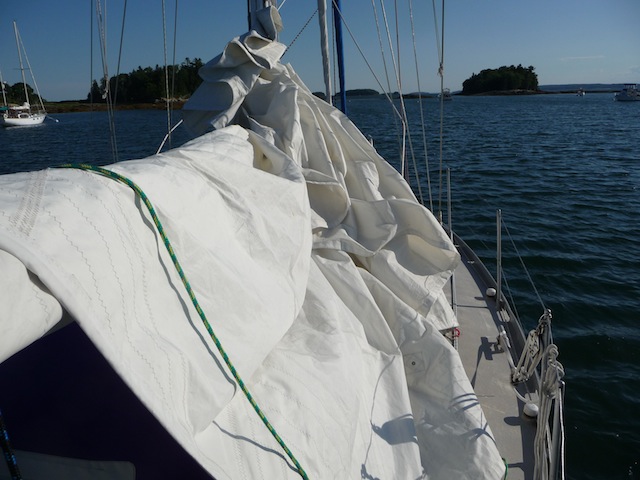 DOUSING THE MAINSAIL: Do It After You Park The Boat