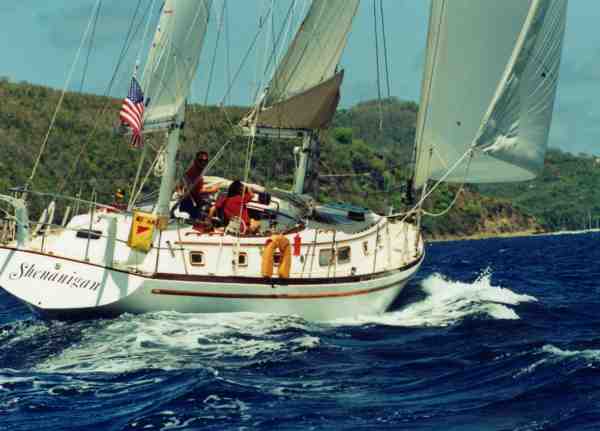 Gulfstar Yachts was founded in 1970 by Vince Lazzara, an industry pioneer who in the early 1950s helped make a success of Aeromarine, one of the very first fiberglass boatbuilders. In the early 1960s he did the same at Columbia Yachts, which became the world’s biggest sailboat builder in its day. Early on Gulfstar emphasized low price and maximum interior space over build quality and sailing ability, but in the mid-1970s the company shifted gears and worked to deliver a more high-end product. The most notable manifestation of this was the Gulfstar 50, a large center-cockpit cruiser first introduced in 1975. The GS 50 was the best boat Gulfstar ever built and also the most popular, with 172 hulls launched during a six-year production run that ended in 1980. Designed by Lazzara himself, the GS 50 boasts superior interior joinery, generous accommodations, robust construction, and a well proportioned hull and rig. These days it is one of the best values on the brokerage market in a larger center-cockpit boat.

Though better built than most Gulfstars, the GS 50 is not without its faults. Construction is simple and straightforward, with a solid hull laminate composed of multiple layers of mat and woven roving. (Note, however, a few hulls may be cored with balsa.) The hull is stiffened, not with liners, but with full bulkheads and furniture components that are tabbed in place. The deck is balsa-cored, with a through-bolted joint glassed over from below. The full-length rudder skeg is also bolted in place. The ballast, which consists of lead chunks embedded in concrete slurry, is encapsulated within the long fin keel.

Problems over the years have included hull blisters, which normally are just cosmetic, but in some cases have involved saturated cavities surrounding the ballast. These must be drained and flushed before they are filled in. The mainmast step, an iron plate in the bilge directly over the keel, is subject to corrosion, while the mizzen step on ketch-rigged boats may have crushed the deck core beneath it. Leaking deck fixtures, hatches, and port windows are other common complaints. In some boats the bronze stern tube housing the rudderstock may eventually separate from the surrounding hull laminate and must then be rebonded in place. There have also been reports of loose tabs around bulkheads and sub-floor structures that also need rebonding. The good news is that many owners value their GS 50s enough that they are willing to make repairs. Well-maintained boats are not hard to find; boats in poor condition are priced accordingly and normally are worthy of reconstruction.

For most owners the boat’s most attractive feature is its interior. The more popular layout, originally developed for the charter trade, features three staterooms and works very well for families. The master stateroom aft with an en suite head and separate shower boasts an enormous U-shaped double berth with enough space for a couple to sleep together athwartship while in harbor or separately in lateral positions while at sea. The forward stateroom, which shares a head with the saloon, has a large V-berth that fills in to form a double, and the third stateroom, midship to starboard, has two single bunks with yet another small en suite head. The L-shaped galley runs down the walk-through alley under the center cockpit to port, with twin sinks close enough to the centerline to drain on either tack. The saloon has a dinette to port and a settee plus a pilot berth to starboard. In the two-stateroom layout, which is more appropriate for a cruising couple entertaining occasional guests, instead of the midship stateroom there is a fabulous wrap-around nav station and expanded engine space beneath the cockpit. 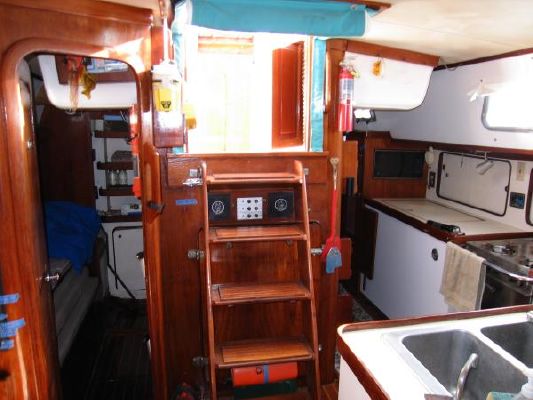 In the saloon looking aft. This is the “charter” layout, with an extra stateroom on the starboard side opposite the walk-through galley 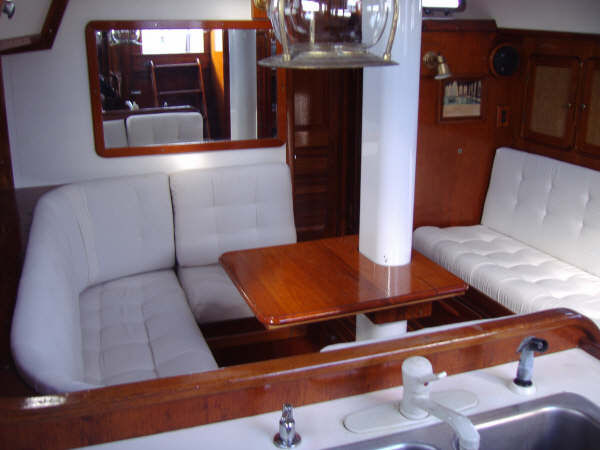 The saloon looking forward. The dinette table, you’ll note, is not very large 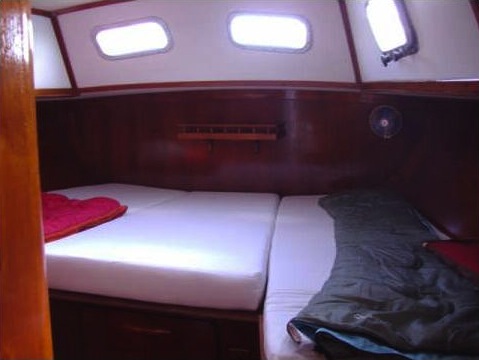 In a seaway the GS 50 is very well mannered. Its forefoot has enough bite and its bilges are deep enough that it does not slam much in a chop. It is relatively narrow with a moderate hull form and does not gripe when sailing to weather. All tanks are below the floorboards, which keeps the center of gravity low, sweetens the motion, and also creates extra storage space under berths and settees.

The sail plan is not particularly large, in either the ketch or sloop configurations, and I would advise against a roller-furling mainsail if you value sailing performance. A number of GS 50s were fitted with early after-market behind-the-mast mainsail furlers and these in particular should be avoided or quickly replaced. Sheeting angles are not very narrow, as the mast spreaders are wide and the chainplates are set nearly all the way outboard. Most owners report the boat will not sail well to windward unless the apparent wind angle is 45 degrees or greater.

Still, the GS 50 is not exactly a slouch when it comes to speed, though it does like moderate to heavy weather better than the light stuff. It’s not hard to keep the boat moving at 7 knots or better under working sail if the wind is blowing over 12 knots; below that you’ll need to break out spinnakers and mizzen staysails to maintain good speed. 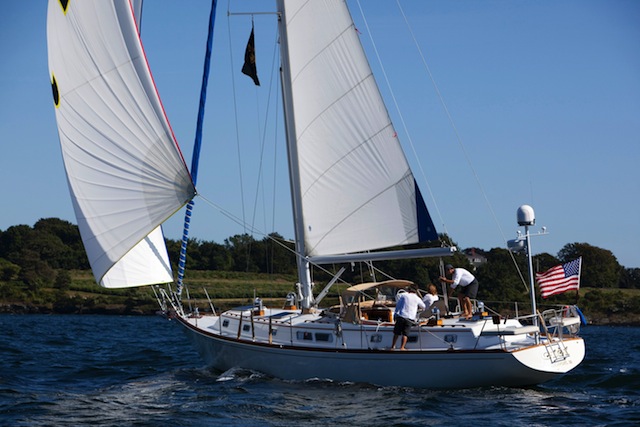 If you like to motorsail, bear in mind the original engine on most GS 50s was a 62-hp Perkins diesel which, though reliable, is not quite powerful enough to push the boat hard into a head sea. Later on an 85-hp Perkins engine was offered as an option and this does a much better job of driving the boat to speed. Several boats now on the market have been repowered–turbo-charged Yanmar diesels seem to be a popular replacement engine–and these may command a significant premium.

The standard fuel capacity, 100 gallons, is a bit low for a boat this size, so if you plan to do some long-range cruising you may want to carry some jerry jugs on deck or expand capacity a bit. The fuel tank is quite low in the boat, which forces the engine’s fuel pump to work hard, so adding a day tank higher in the boat with an effective transfer link to the main tank would be an excellent upgrade. Many GS 50s were delivered new with Onan generators installed. These are notorious troublemakers (on one boat I once cruised aboard we referred to ours as Onan the Barbarian) and should probably be replaced sooner rather than later. 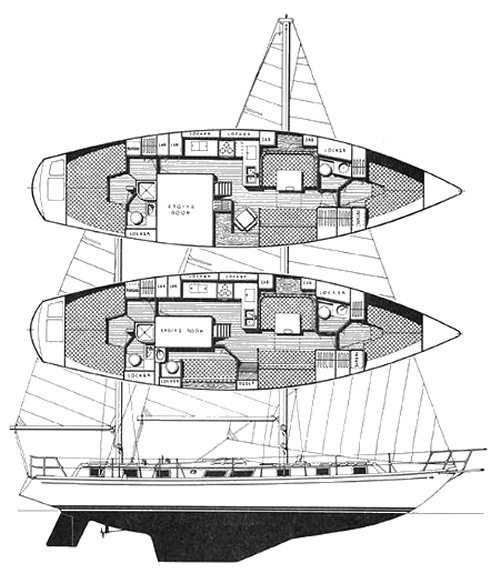