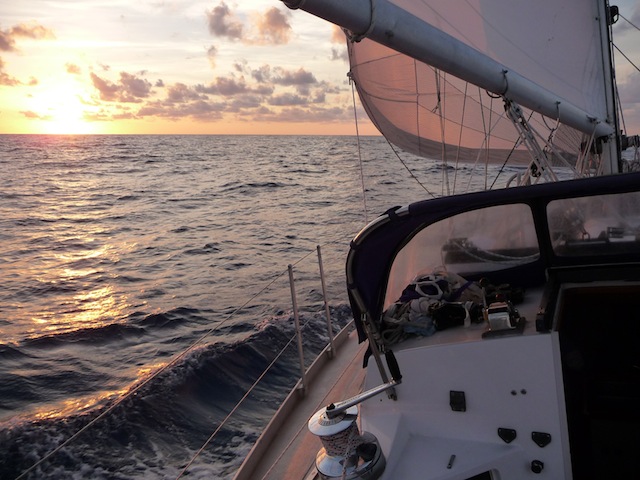 Just arrived yesterday in Portland, Maine, with crew members Billy “Swizzle” Springer and Adam “Twinkletoes” Cort after another reasonably fast passage on Lunacy. This time we covered a distance of 820 miles in 5 days 6 hours, again without using too much fuel for motoring–just 13 gallons. Which means in all, moving the boat 1,670 miles from Puerto Rico to Maine via Bermuda, I used just 18 gallons of fuel. Not so much because I got lucky with wind, but because I had light-air sails (see photo up top of Lunacy ghosting along under her screecher) and was willing to use them.

Departing Bermuda on May 29 we were confronted with having to sail through a big high-pressure cell for most of the passage. Most of the time we had some kind of breeze to work with and thanks to the screecher were able to keep moving at 4 knots or better in wind as light as 6 knots. For a while, however, it was perfectly calm, with perfectly glossy unrippled water surrounding us in all directions.

The surface analysis chart for the second day of the passage. The letter H is everywhere

Curiously, when it was calmest, with the engine throbbing away at its loudest, a group of four small tuna fish found us and swam along beside the boat for several hours. This was only the second time this had ever happened to me. The first time was back in the 1990s, and it was just one fish, a small yellowfin tuna, that swam behind my old boat Crazy Horse for over four days as we sailed from mainland Portugal to Madeira. 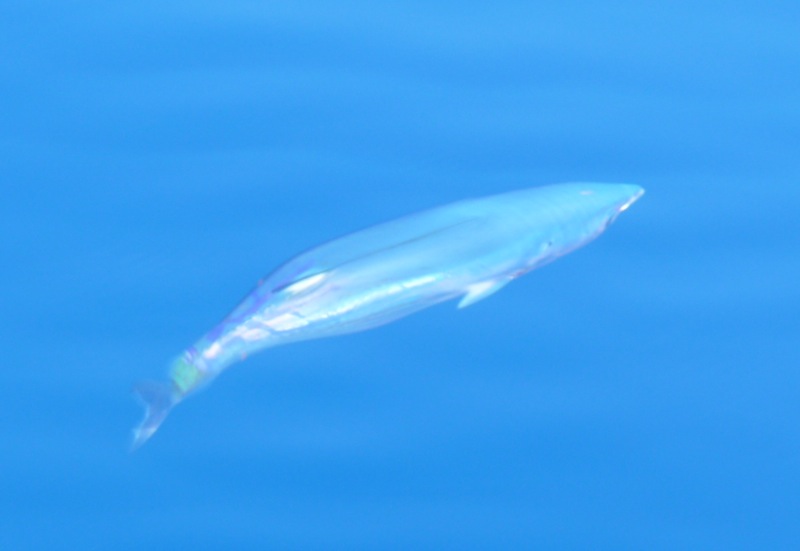 One of our four escorts. They stationed themselves at the bow and occasionally swam off short distances looking for snacks before returning to station 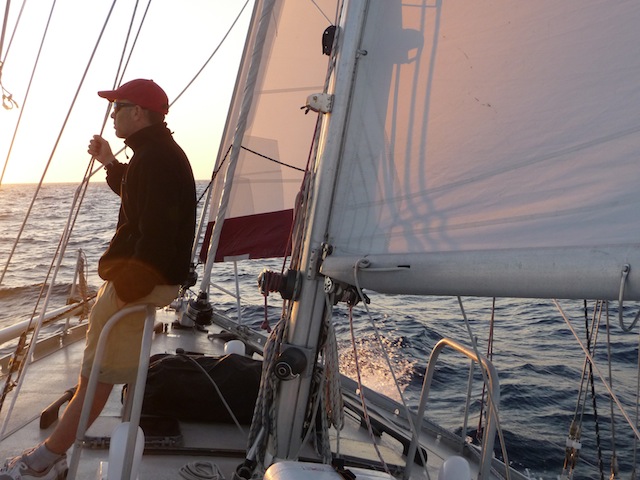 Twinkletoes keeps an eye out for cetacean protuberances

Our other close encounter was with a sperm whale. Adam was up in the cockpit on watch (this was on Saturday) and first spotted some spouts at some distance off the port bow. Not long afterward a juvenile sperm whale swam right up to the boat, close enough that Adam felt compelled to grab the tiller from the autopilot and steer away from it.

Or so he says. 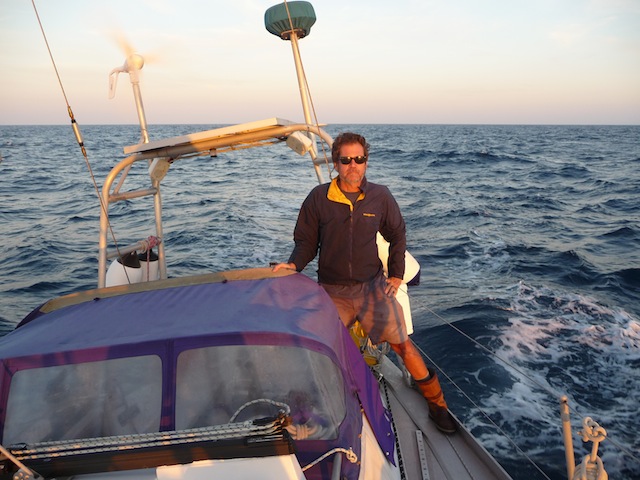 Your humble narrator, trying his best to look salty 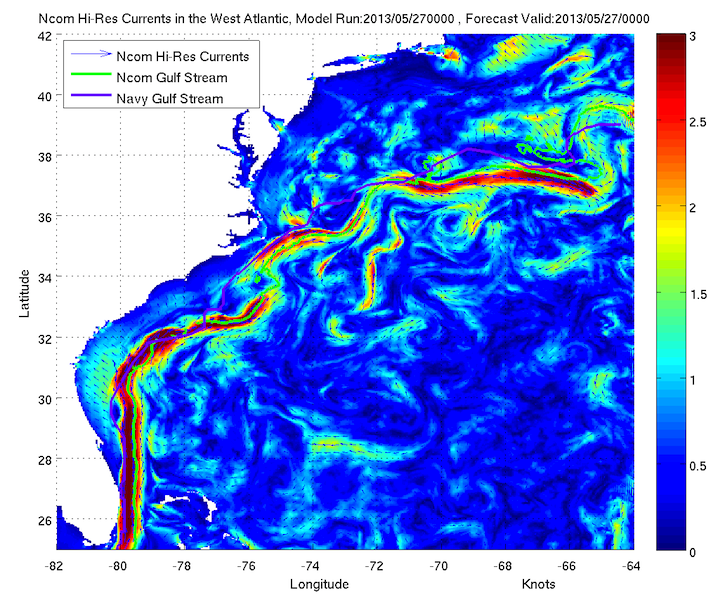 Our Gulf Stream crossing ended up being very straightforward. As you can see in the image above, there was a long hot eastbound stretch of fast current directly between Bermuda and northern New England, followed by a weaker northbound meander. I toyed with the notion of heading well east of the rhumbline to get into that northbound current, but opted in the end for a straight cut across the eastbound current, as the detour seemed too large, particularly as we were expecting the wind to shift from east to west (which is, in fact, what it did). Seas in the Stream were a bit lumpy and confused, and we were mildly uncomfortable for a while, but our transit was otherwise unremarkable. 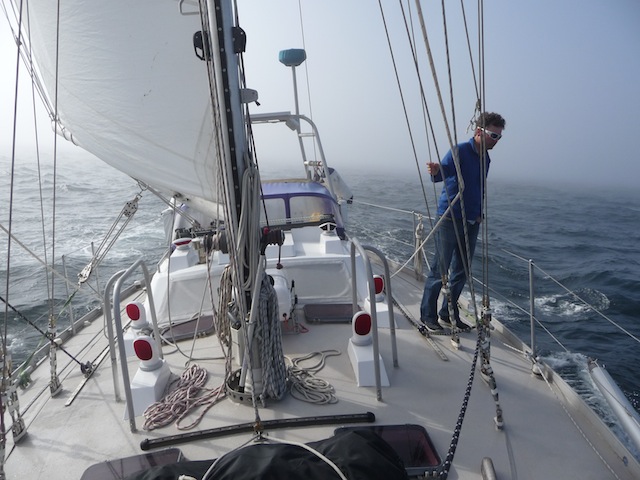 Swizzle in the fog, looking for dolphins

Approaching Great South Channel, as so often happens, we were plagued with fog and a great increase in vessel traffic. This is where the AIS receiver proved especially useful. Studying the device, I noted at one point we were soon to pass within a couple of miles of the Queen Mary 2, described baldly on the display as a “1,200-foot passenger vessel.” I had a very civil, mildly amusing conversation with the officers on her bridge as we negotiated a pass over the VHF. Unfortunately, the fog at this point was so thick we never got a look at her, though we did hear her foghorn moaning away as she passed. 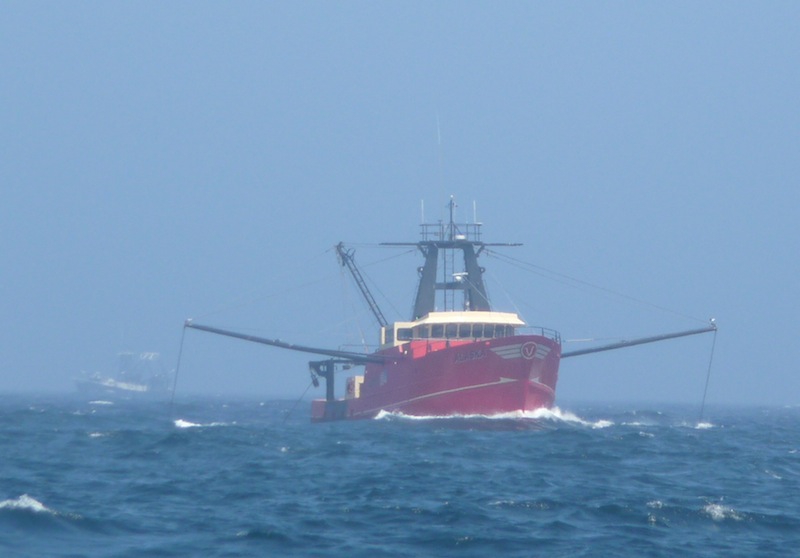 Later I had a much less civil exchange with the skipper of a fishing boat who effectively refused to negotiate a pass with me. “Do what you want,” he said and declined to answer another hail. In the end, I had to change course 30 degrees to avoid him.

The last night of the passage was definitely the most boisterous. At last our big high was roiled by the approach of a frontal system, and we had a brief thunder squall at 0-dark-hundred with gusts of wind to 35 knots. 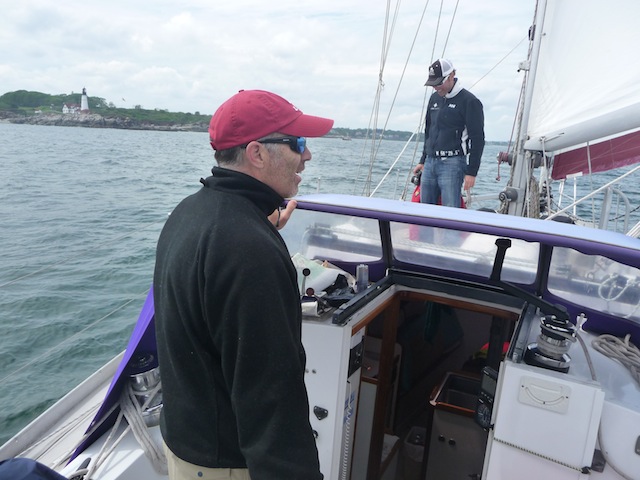 Adam and Bill on deck as we pass by Portland Head

Conditions were strong through the rest of the night and into the morning. But by afternoon, when at last we were approaching Portland, the wind was quite moderate and the sun was blasting through the clouds.