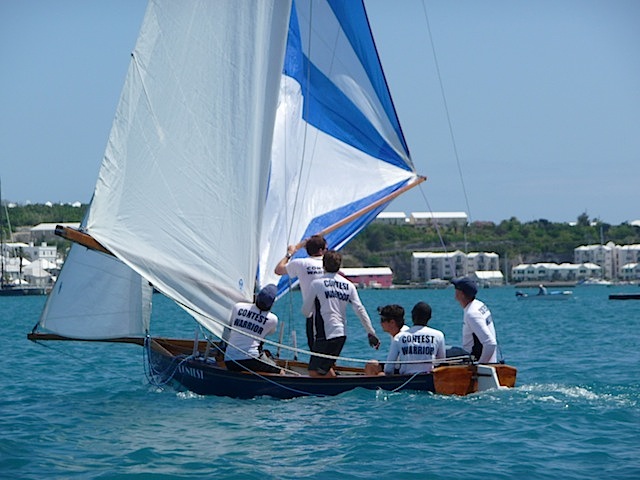 Practically the first thing I learned on flying back to Bermuda to rejoin Lunacy this past Thursday was that there would be dinghy races here in St. George’s Harbor on Friday. That and the prospect of a front moving through on Saturday immediately put my inchoate plan for a Memorial Day weekend mini-cruise with the bride on the back burner. No way could I miss a dinghy race. I’ve been fascinated with these traditional local racing machines–formally known as Bermuda fitted dinghies–ever since I first saw some racing here way back in August 1995.

The concept is familiar enough: take some slip of a traditional hull form, tack on an egregiously over-sized sail plan, pour in a large, eager crew to somehow keep the whole shebang upright. You see variations on the theme in such vessels as the Chesapeake log canoe, Bahamian sloops, and a half-dozen other traditional racing classes scattered across the Caribbean basin.

Even better, I now had some skin in this game. Last time I was here, I ponied up $50 and became a card-carrying member of the St. George’s Dinghy Club, long-time home club of the famous fitted dinghy Victory. I have also long been acquainted with Victory‘s current skipper, Mark Soares, founder of Bermuda Yacht Services.

Clare and I spent the morning chasing the four-boat fleet through race one up and down the windward-leeward course in our little inflatable. Conditions were a bit strong for such precarious craft–wind blowing 15 knots and over with a mild chop. One boat swamped and never made it around the first mark. One crew had the chutzpah to fly their chute on all downwind legs and thus dominated the competition. Poor Victory came in last in the first race, sank in the second (so we later learned), but did come in second in the last race. 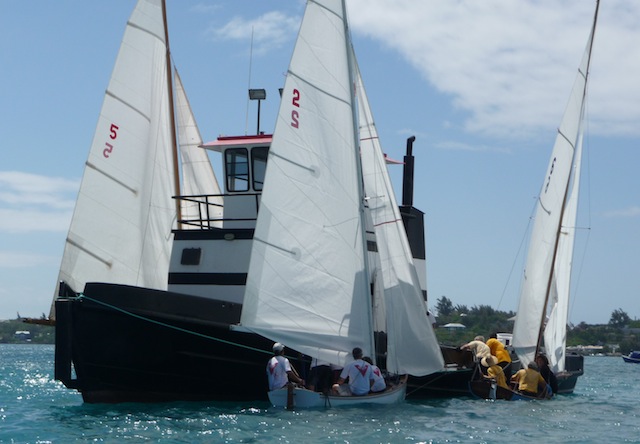 Races were started with the four competitors clinging to either side of a moored tugboat. When the gun sounded the crews pushed off and immediately sailed away from the tug on opposite tacks 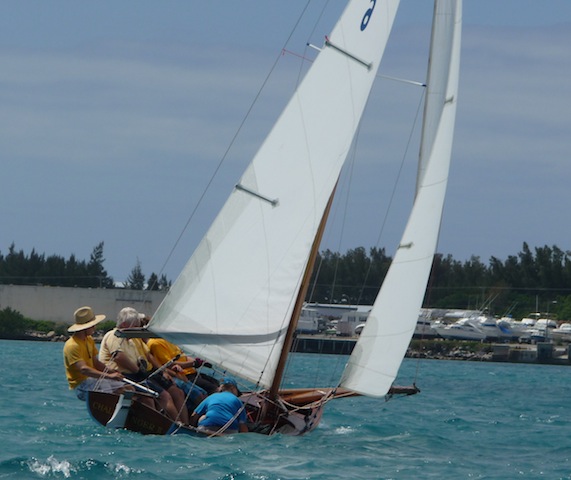 Closehauled on the windward leg. The crew member to leeward is bailing furiously, an important job, as the lee rail is often underwater. As Mark Soares has explained to me: “If you aren’t sinking, you’re not going fast enough.” 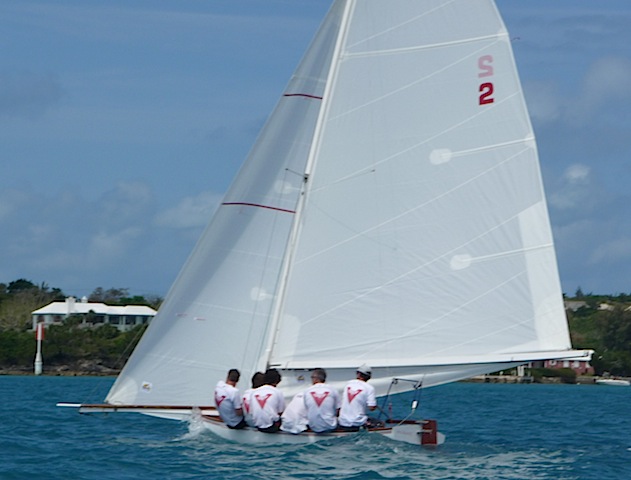 This profile shot of Victory driving to windward gives some sense of the size of a fitted dinghy’s sail plan. The bowsprit is nearly the length of the hull; the main boom aft is way outboard. Underneath the hull is a fixed fin keel. This is actually one of Victory‘s smaller rigs, used in stronger conditions. She has four different rigs with different size bowsprits and masts 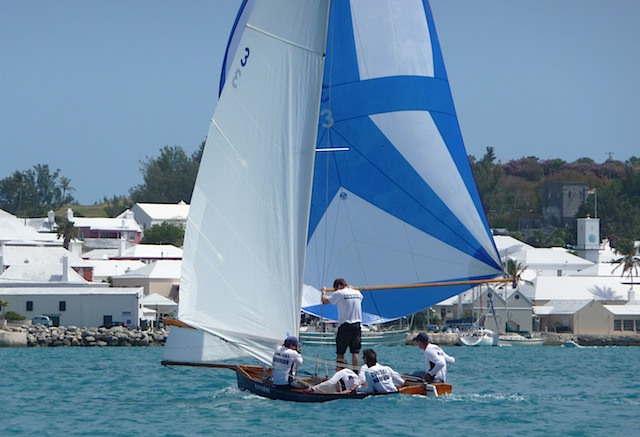 The victorious dinghy Contest from the Royal Bermuda Yacht Club showing good form flying her chute downwind. Notice how one crew member has to hold the spinnaker pole in place against a shroud while the sail is flying. In close races I’ve seen idle crew jump overboard on the last downwind leg so as to lighten the boat

Meanwhile, I’ve been studying all the bluewater cruising boats that have been flooding through the anchorage on their way north and west to the U.S. and Canada or east to Europe. I can’t remember when I last saw so many here all at once. Several, of course, are boring cookie-cutter fiberglass designs, but it is encouraging to see that there are also still a few funky boats with character (and characters aboard) roaming around out there. 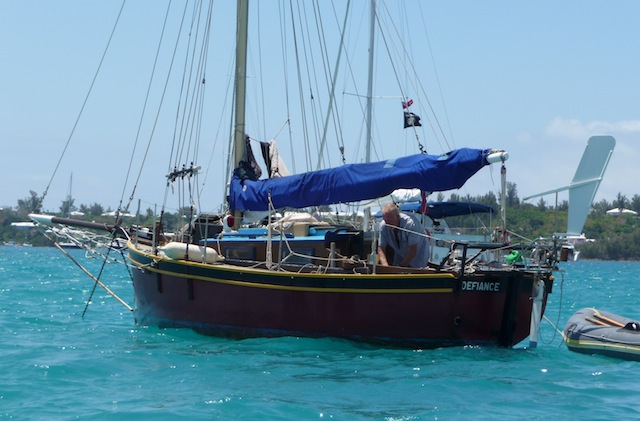 An older gentleman, Rob, sailed this tiny 22-foot gaff-rigged Falmouth cutter, named Defiance, singlehanded over to the W’Indies from England for the winter and is now voyaging home again. She is built of ferrocement, and Rob is the first person I’ve ever met who swears that ferro is his favorite boatbuilding material. He lost a previous boat, a ferro Venus ketch, when he sailed straight into one of the Azores while sleeping back in the 1980s. Claims the boat would have broke up on the rocks much faster if she’d been built of anything else 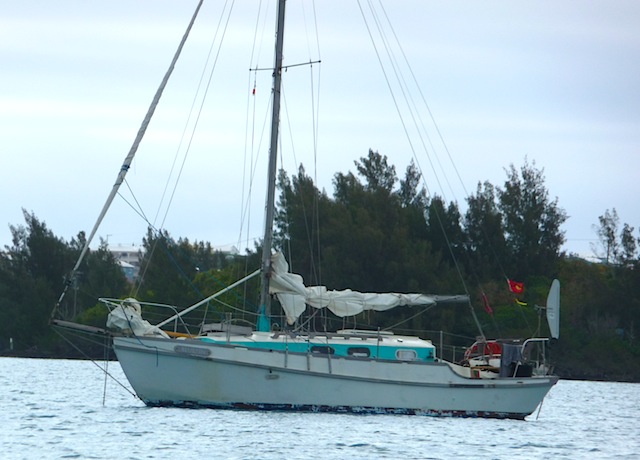 A Golden Hind 31, just like my old girl Sophie, except this one, Blufin, is all plywood. She’s manned by a couple who sailed her from the Med to the Caribbean and are now headed back again. Their tender was stolen in Gibraltar and they have yet to replace it. The whole winter while cruising the W’Indies they simply swam back and forth to shore, pulling groceries and supplies along behind them in a small inflatable raft 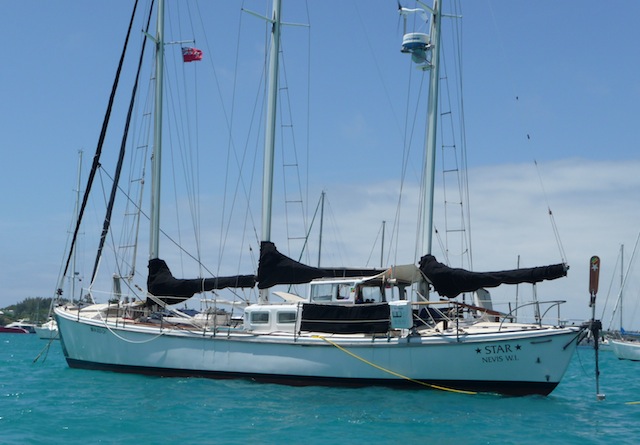 This is a boat, Star, that I have long admired–a triple-masted Marco Polo design by L. Francis Herreshoff. I’ve seen her here often, both in the fall, when boats are headed south, and in the spring, when they’re going north, but I’ve never met her crew 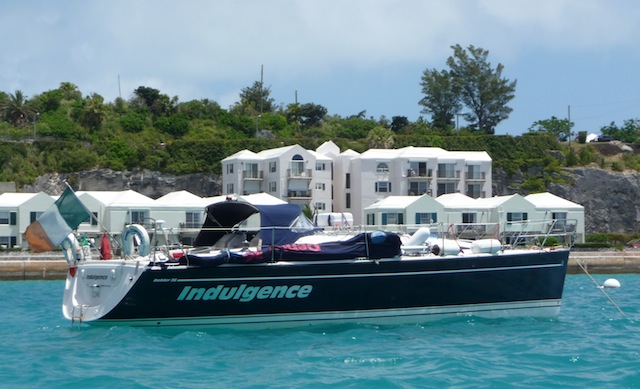 Yes, this is a production fiberglass boat–a Dehler 36–but I was intrigued by the missing mast. No, she was not dismasted. The crew told us they found a crack in the mast, had it pulled, and are now waiting for repairs to be made. The boat is anchored very close to Defiance, and I’ve been amused by the contrast in their names and circumstances 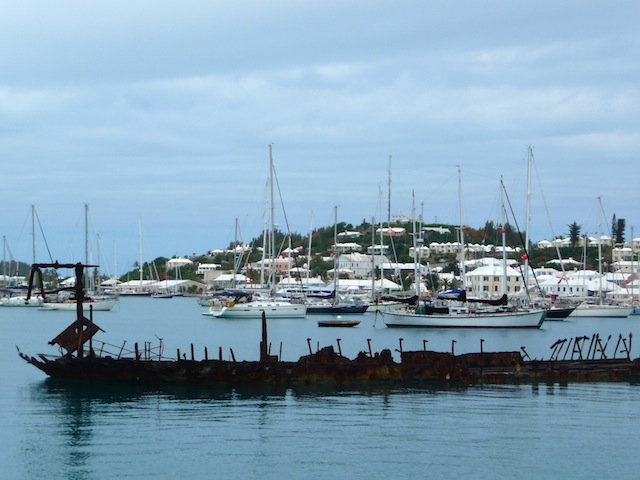 A view from Lunacy‘s mooring across the wreck of Taifun and the harbor toward town. This shot shows only about a third of the boats now staying in the main anchorage, plus there are many others anchored across the way in the Powder Hole

When it hasn’t been raining, Clare and I have been exploring the immediate vicinity by dinghy and on foot and have also forayed to Hamilton by bus. Lunacy is in good shape, though I’m still scratching my head over the problem with the flooding exhaust. I also need to scrub her bottom again, which will make the fifth time since November. I have crew flying in tomorrow, and I expect we’ll be off ASAP on Wednesday morning.