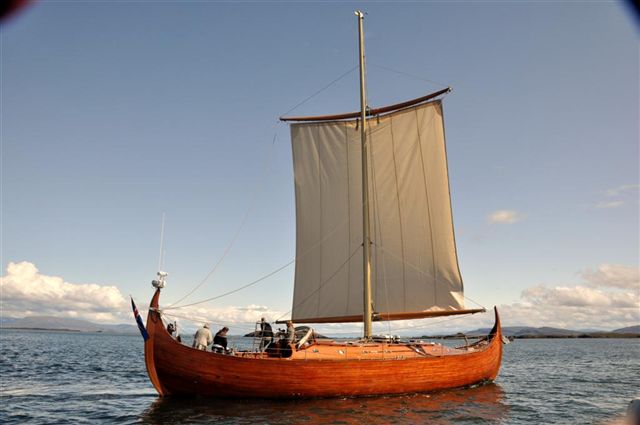 Wanna-be Viking voyagers (e.g., Jarle Andhoey) who are daunted at the prospect of having to plunder and pillage in open boats can heave a sigh of relief. At last someone has had the vision to both design and build a modern-day Norse longship with comfortable interior accommodations and contemporary amenities. The visionary in question is Sigurjon Jonsson of the Skipavik shipyard in Stykkisholmur, Iceland, which has been building fishing boats since 1928. This beautiful and extremely unusual Langskip 55, the first yacht ever built at Skipavik, was conceived by Sigurjon as a versatile world-class cruising boat that can both cross oceans and wander up shallow rivers and inland waterways with impunity. Cruisers with a sense of history take note: these are the very same attributes that allowed Norse sailors to make such a nuisance of themselves during the Middle Ages.

Truly this is a remarkable vessel. Check out the numbers below and you’ll get a sense of its unique capabilities. The displacement/length ratio is low enough to qualify it as a competitive cruiser/racer, and its nominal hull speed is high enough that I reckon it might potentially break 20 knots while surfing on its flat shallow bottom down the front of a big ocean wave.

But the sail plan is ridiculously conservative. Not to mention archaic. Sigurjon describes it as a hybrid combination of a traditional Viking rig and a modern DynaRig (as seen on the high-tech square-rigged superyacht Maltese Falcon). The boat’s fixed mast is carbon fiber and the curved yard arms (presumably this is where the “Dyna” aspect asserts itself) are Sitka spruce. According to Sigurjon, the boat “easily” sails to windward under this rig at a close-hauled angle of 60 degrees. 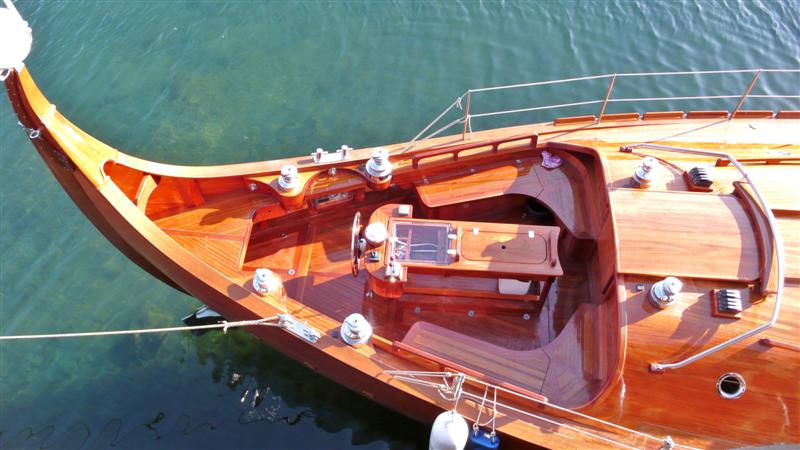 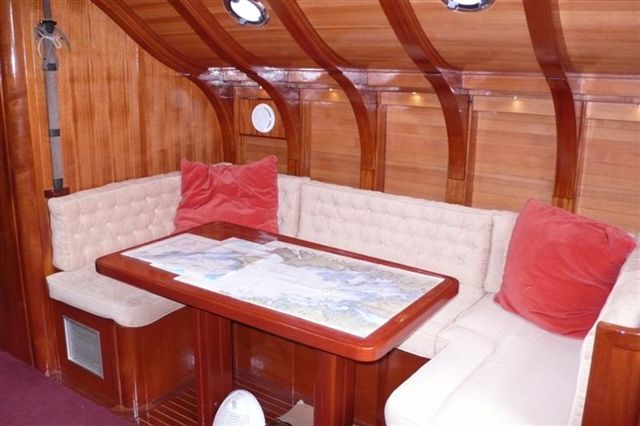 Hence the need for some serious auxiliary power. You’ll note the lack of oars, but will be relieved to learn there are two 75hp diesel engines down below to help push this svelte creature along when a vulnerable-looking Irish monastery appears on the horizon dead to windward. While you are motoring toward your designated target, you’ll have no trouble staying comfortable, thanks to three double staterooms with en suite heads, a 6kw generator, a full-on galley with twin reefers, and (of course) a central air-conditioning and heating system. To make sure you don’t strain yourself on those occasions when you do raise sail, the Andersen winches on deck are powered by electric motors. And, yes, when coming alongside the monastery’s quay (just before your Viking horde leaps ashore with battle axes drawn) you’ll have a bow thruster at your disposal to save you from embarrassment.

Some other interesting particulars: the hull is wood-epoxy (Douglas fir and mahogany on an iroko keel) with a shallow lead ballast keel (weighing four tons) bolted on to the full-length wooden keel. The rudder (no steering oar, unfortunately) is stainless steel and is controlled hydraulically. Last I was in touch with Sigurjon, he was willing to part with hull number 1 for a cool $1.75 million US. (Clearly, you’ll have to knock off several monasteries to make one of these babies pay for itself.) He claims he can build similar boats at lengths ranging from 40 to 80 feet. 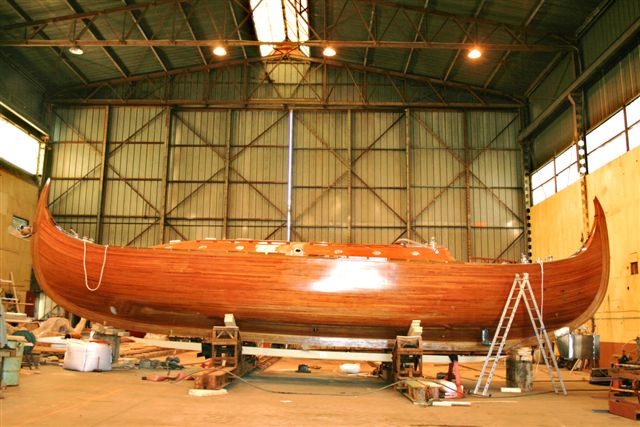