Just had to share this one. This is an animated NASA “visualization” video showing the disposition of global ocean currents during the period from June 2005 through December 2007.

Aside from how beautiful it is, what strikes me most is the prevalence of huge eddies in certain locations–particularly off southern Africa, where there is an impressive string of them stretching from the southeast coast out west into the South Atlantic. There are also some interesting looking eddies off the northeast coast of South America and either side of the Central American isthmus, particularly on the Caribbean side.

It is interesting to compare the beginning of this video, which shows currents in the Caribbean basin during the very active 2005 hurricane season (the year of Katrina, remember?), with this one below (another NASA production), which shows how that season played out atmospherically:

To complete this trilogy (air, water, under the water), I’ll also share this video (a NOAA production), which takes us on a tour of the ocean bottom:

What’s most striking here, of course, is how spiky the topography is in various places. Also, note the location of the Titanic at 1:10 min. It sank right at the base of a tremendous cliff face, just off the edge of North America’s continental shelf. 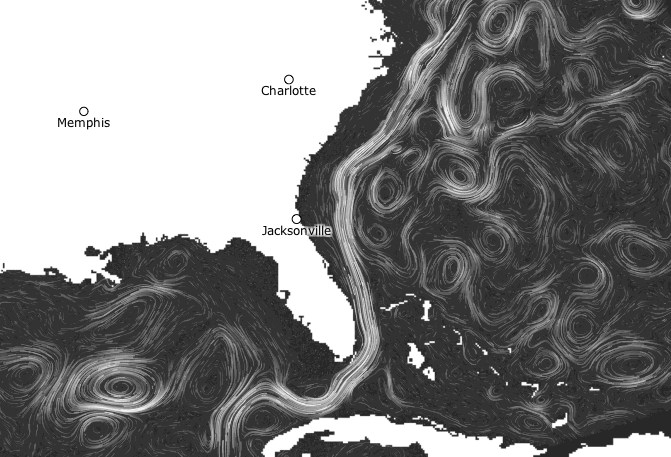