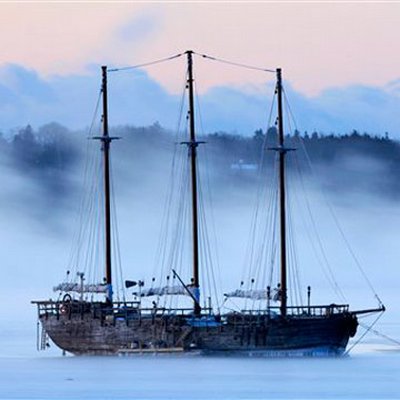 I never met George McKay, but I often saw his bizarre schooner-rigged galleon Raw Faith, first in Rockland, Maine, where she spent several years, and again last winter in Portland, during my own wanderings on the coast. Though I always admired the tenacity with which McKay pursued his dream, his ship always struck me as a cruel parody of a sailing vessel. Usually I’m a sucker for crazy guys with weird homemade boats (see Poppa Neutrino and Reid Stowe), but something about Raw Faith always made my skin crawl.

I wasn’t very surprised–indeed, I was almost relieved–when I learned that Raw Faith sank on Wednesday about 160 miles southeast of Cape Cod. It was a long anticipated tragedy, realized at last. Most fortunately, McKay and the one crew member aboard both survived the awful denouement.

McKay had been trying to take Raw Faith to sea for several years. Soon after he launched the boat in 2003, he brought her to Rockland and twice, both in 2004 and 2006, had to be rescued and towed back into port by the Coast Guard when he tried to voyage forth from the area. The Coast Guard, as a result, both times held Raw Faith prisoner in Rockland and decreed she could not leave the harbor until major improvements were made.

When I saw Raw Faith in Portland last winter, tied up at Portland Yacht Services, I could see at once she had indeed been vastly improved since her days in Rockland. Her rig, in particular, which before always looked merely decorative rather than functional, now looked as though it might actually stand up to some canvas in at least a moderate breeze. Come spring Rob Benson, the PYS service manager, assured me that he and the boys had done much to help educate McKay and company as to how a proper sailing vessel should be set up and maintained.

Raw Faith left Portland and somehow made it down to Massachusetts over the course of the summer. Last Saturday, with just two crew aboard, she left Salem bound for Bermuda. She had no auxiliary engine and minimal communications gear–just a handheld radio and an EPIRB, which was ignited two days later. The following day, December 7, McKay and his crew, who reported the boat was taking on water, were taken off by a Coast Guard helicopter. (You can watch a video of the rescue here.) Raw Faith finally sank the next morning.

The Coast Guard deployed significant resources in saving McKay. There were two Falcon jet sorties and four helicopter sorties from Cape Cod, plus a C-130 plane that flew in from North Carolina, and the cutter Reliance, which steamed to the scene from Kittery, Maine. Normally a situation like this would warrant some grumbling about how maybe McKay should have to pay for being rescued from his own stupidity. But the fact that the Coast Guard has in fact been monitoring and, in effect, supervising his stupidity for years sort of estops them from bitching too much. It says something, however, of how tolerant they are that they didn’t just seize the ship and chop it up for firewood in the first place.

McKay first started building Raw Faith in Addison, Maine, back in 1999. Initially he drew his inspiration from his eldest daughter, Elizabeth, who suffers from Marfan syndrome and is confined to a wheelchair. McKay sought to make his vessel wheelchair-accessible so Elizabeth and others like her could enjoy some time on the water, but eventually Raw Faith‘s mission seemed to evolve. In the end she became sort of an ersatz sail-training ship and would-be “pirate ship” tourist attraction.

To get an idea of the nature of the training offered, you can check out this video here of some young crew members raising anchor with a power drill.