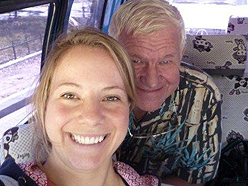 Yikes. Things are getting grim out there. Just last week I blogged about the tragic Emma Goldman disaster, wherein a young 25-year-old woman lost her dad at sea. Now comes word that another young woman, Canadian Myda Egrmajer, 24, got to see her dad, Milan Egrmajer, 58, shot and killed by a gang of thieves who attacked the pair aboard Milan’s Ericson 35 Adena while they were anchored in Laguna El Diamante in Honduras.

This occurred last Thursday or Friday, and the details are not yet clear. It seems the thieves fled after Myda started firing flares at them. She then radioed for help and was eventually picked up by another vessel, which took her to Belize. Apparently, she left her father’s body aboard Adena, where it was subsequently recovered by Honduran authorities.

Milan, an electrical engineer from Ontario, was two and a half years into open-ended cruise and had recently been joined on the boat by Myda. She planned to cruise with her dad to Panama. They put into Laguna El Diamante to shelter from bad weather. Reports are confused as to whether they were moored close enough to shore for the thieves to come straight aboard, or whether a boat was used. Myda evidently spent at least a day aboard the boat with her dad’s corpse while trying to summon help by radio or sat phone. Honduran authorities claim the weather was too bad for them to respond promptly. Myda was taken off the boat by either an Australian yacht or a launch from a passing freighter or tanker.

The attack on Adena comes just one week after another yacht, the French catamaran Maroine, was boarded in nearby Puerto Escondido by six men wielding guns and machetes. They plundered the boat, but did not harm the crew.

Seems like it might be wise to exercise a great deal of caution if you are cruising in northern Honduras.

You can learn more about Milan’s cruise aboard Adena at his blog. He seems to have been an excellent fellow.

PS: There was yet another fatality in the cruising world quite recently. Jonathan Farrar, 64, from the UK, died during a rescue attempt after his yacht Snooker sank en route from Portugal to the Canary Islands on November 29. Another crew member, Tim Hall, 43, survived. You can learn a bit more here.

I thought about sharing this last tidbit with you earlier, but was afraid you’d think sailing is all about death and destruction if I did. I know it does seem that way sometimes, but a blog about traveling by automobile, I might point out, would be much, much grimmer than this one.