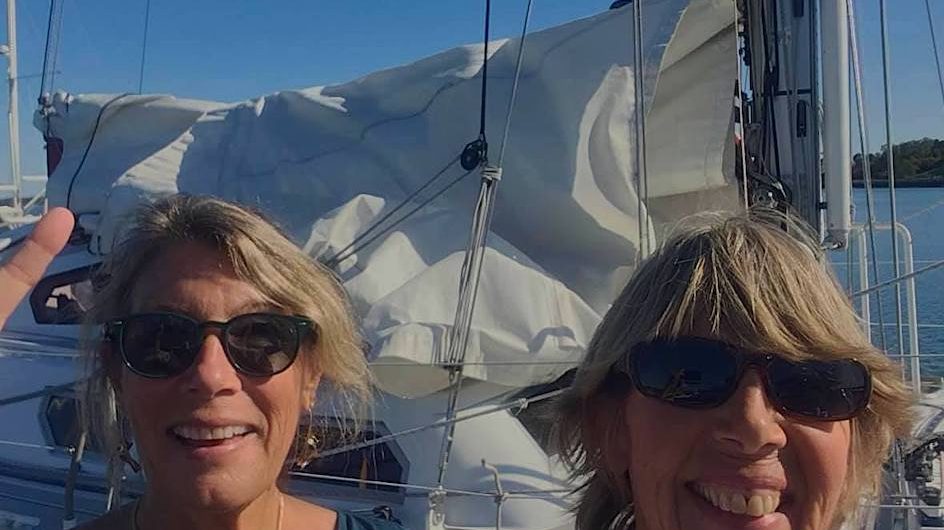 Oct. 23/2020:   Those there are my two girl cousins–Cali, left, and Laura, right–in the foreground there, who came last week to help me (in the background there) get the mainsail off Lunacy so she can be hauled out and stored for the winter. It was my first time taking the main off this boat, and it was more of a production than I expected.

It’s also my first time storing this boat on the hard for the winter. In the three previous winters we’ve owned her I’ve taken her down to the southeast US or the Caribbean so we can keep on enjoying her. But now that Damn Virus looks to be making a worldwide resurgence and there are many random factors at play, so that doesn’t seem like such a good idea this year.

Before resigning myself and the boat to this fate I did partake of one last solo jaunt down the Maine coast. 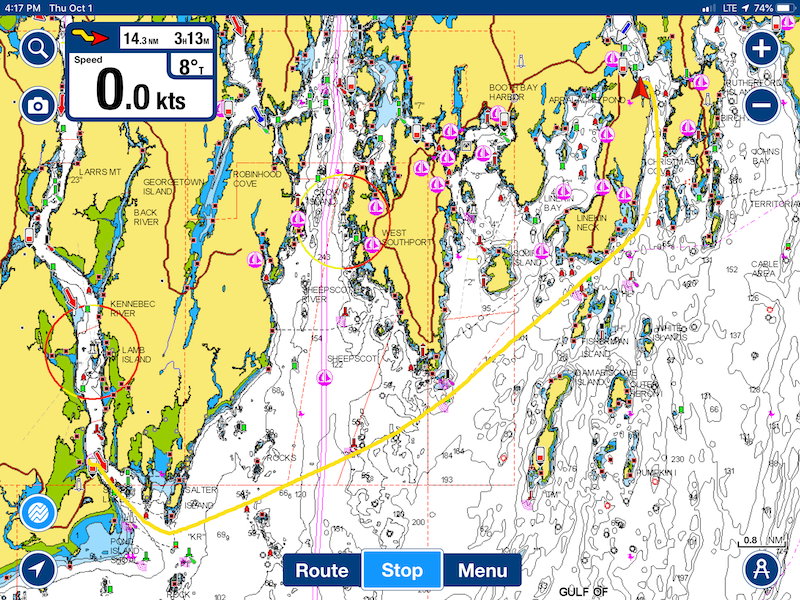 After puttering through thick fog first to Jewell Island in Casco Bay, and then again in more fog to Popham Beach, where I sheltered from a southerly gale and visited more friends and family, I sailed in fine weather from Popham to Farnham Cove at the mouth of the Damariscotta River 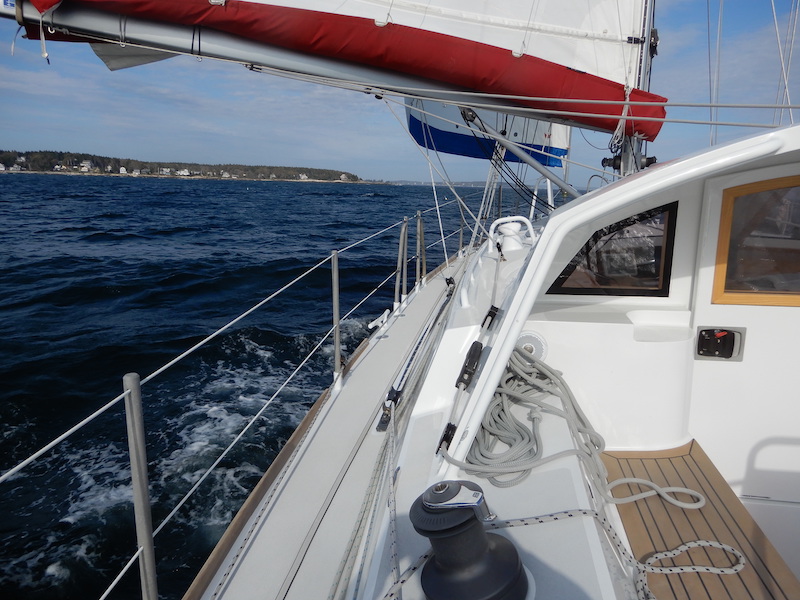 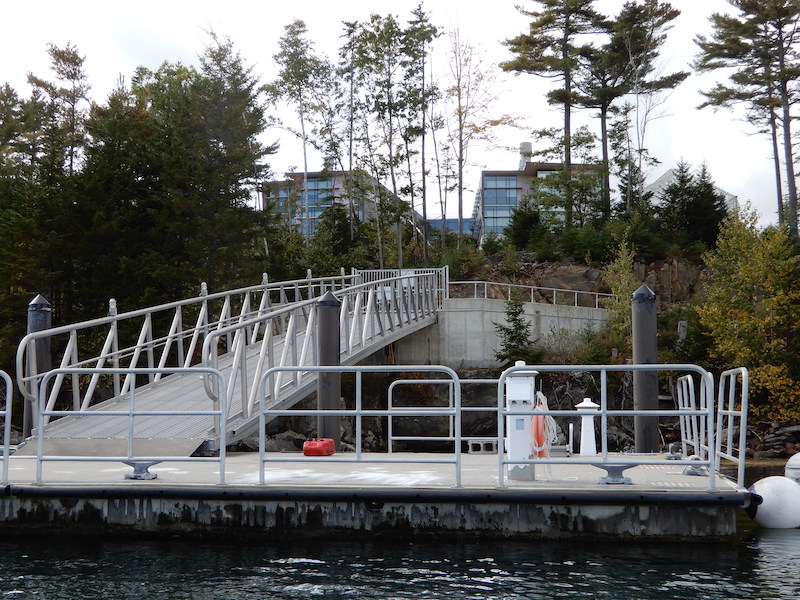 An interesting discovery. This dock I found on Farnham Cove, and the impressive looking facility behind it, belong to the Bigelow Laboratory for Ocean Sciences, an independent non-profit research institute that has “reimagined ocean research—fusing the best of scientific inquiry and entrepreneurial ingenuity,” according to their website 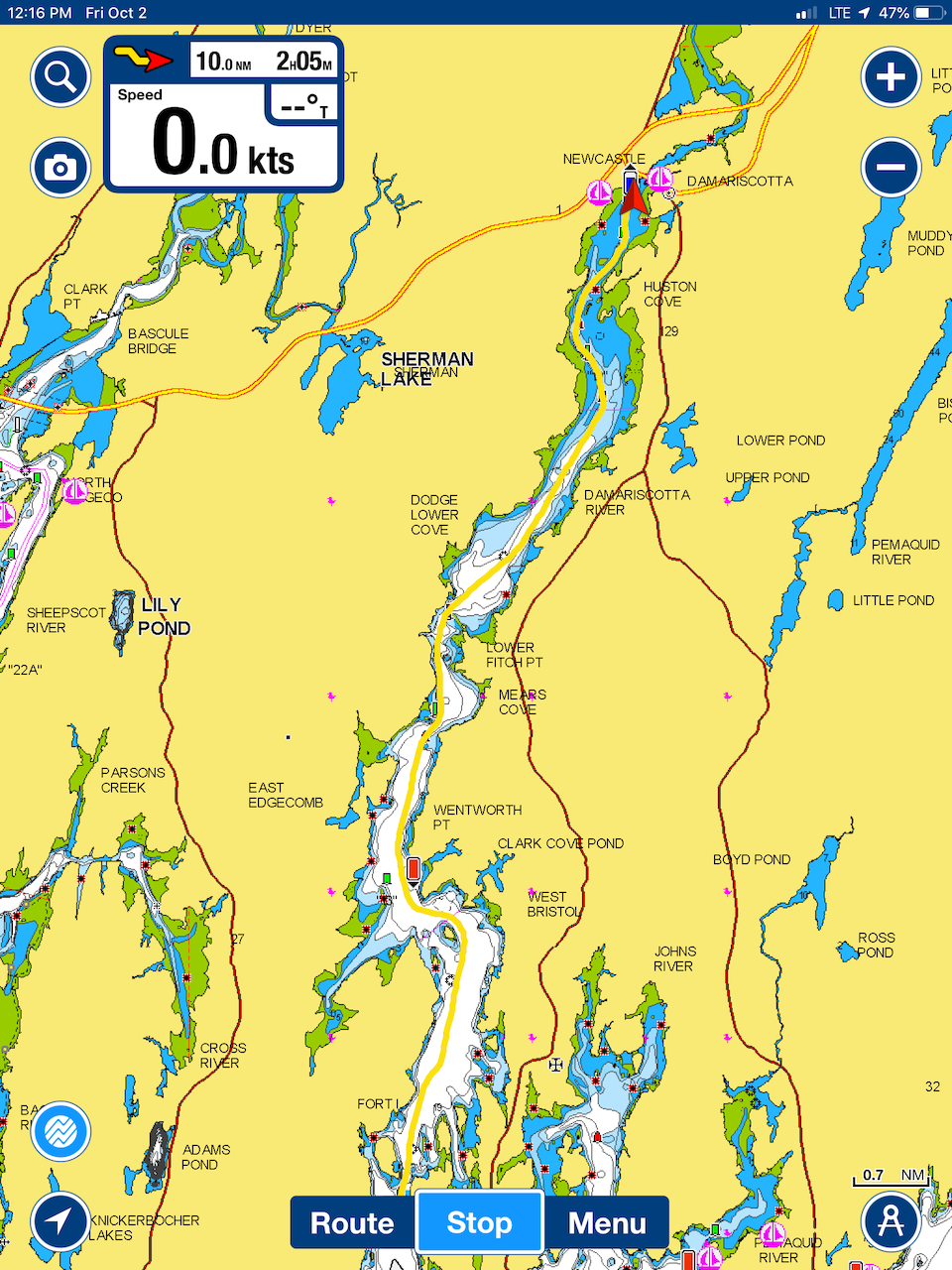 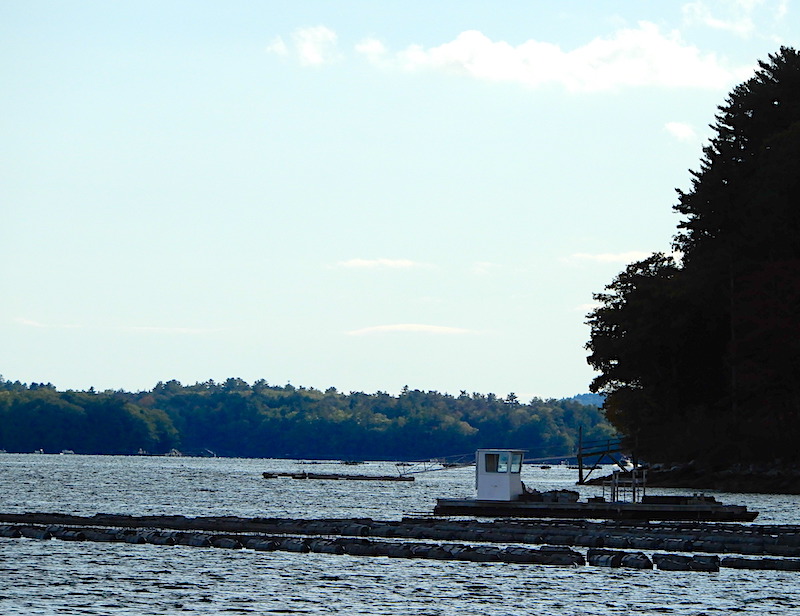 And yes, there is still a lot of oyster farming on the river 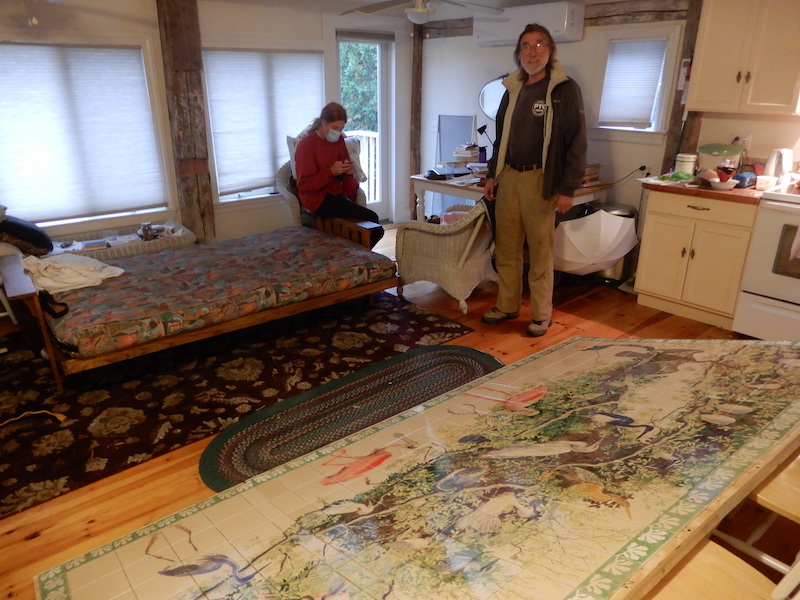 While upriver I visited my old colleague Nigel Calder, who has been hunkered down at his home in Newcastle for the pandemic. This is Nigel showing off a huge tile panorama created by Terri, his wife, and Pippin, his daughter. That’s son Paul lurking in the background with a mask on 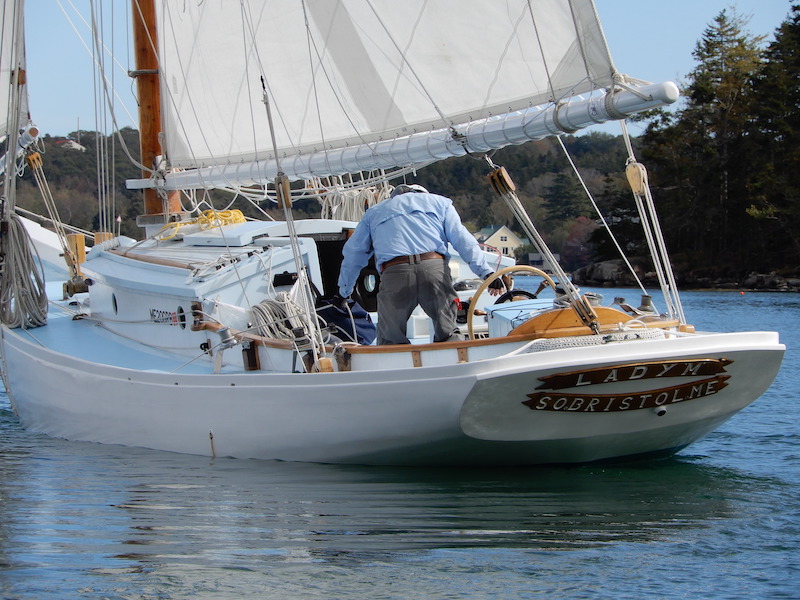 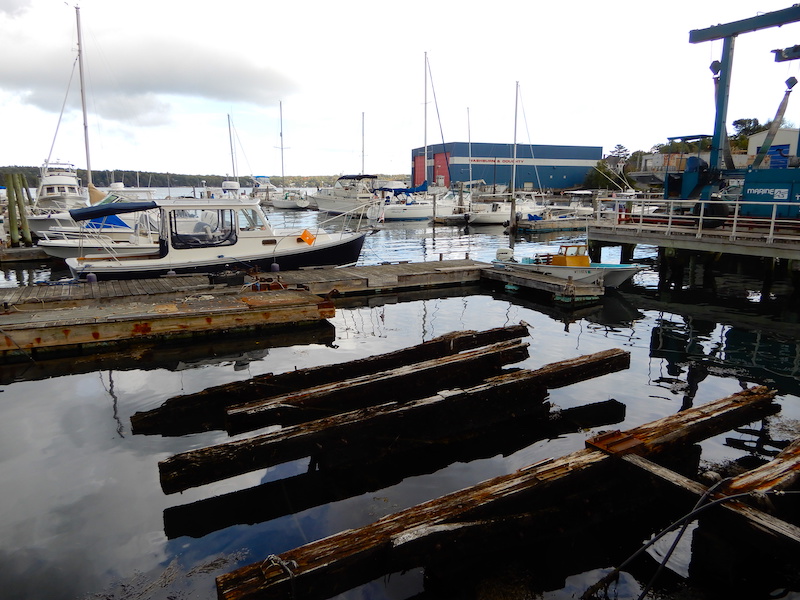 I stopped again at Farnham Cove and took some time to ramble around East Boothbay. That huge shed you see in the background used to belong to Hodgdon Yachts, where they cranked out some amazing super-cool super-sized sailing yachts: Comanche, Scheherazade, Antonesia, and Windcrest, to name a few. They sold the facility two years ago to Washburn & Doughty, who builds commercial vessels, primarily tugboats 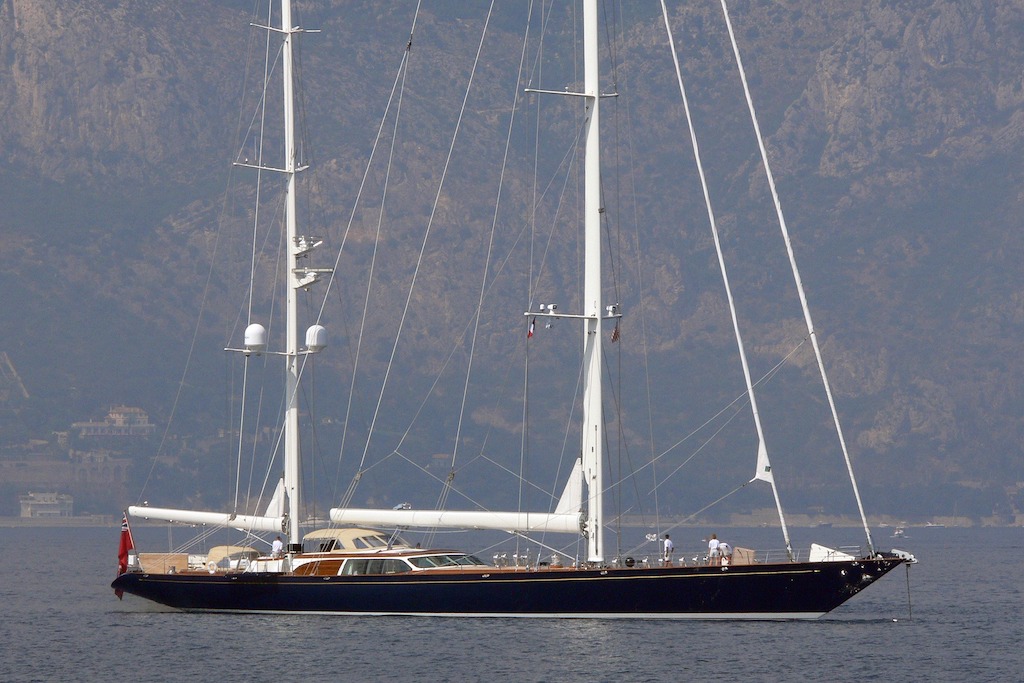 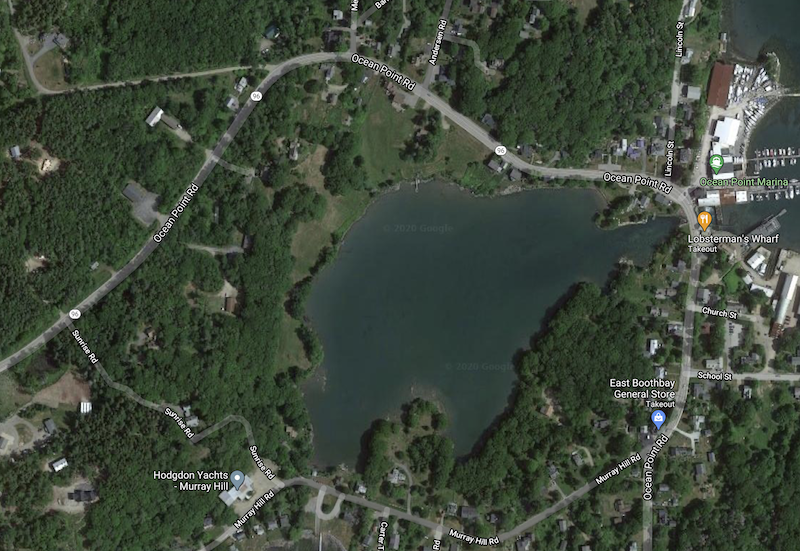 As part of my ramble I stopped in at the East Boothbay General Store and then circumnavigated Mill Pond in a clockwise direction. To complete this circle I hiked up “Sunrise Road,” seen on the left here in this Google Maps satellite view. This is not a road at all, but a trail that morphs into a private driveway, which, it turned out, belongs to Tim Hodgdon, of Hodgdon Yachts. We had a brief but pleasant conversation. FYI, Tim would really appreciate it if other people did not make the same mistake as me 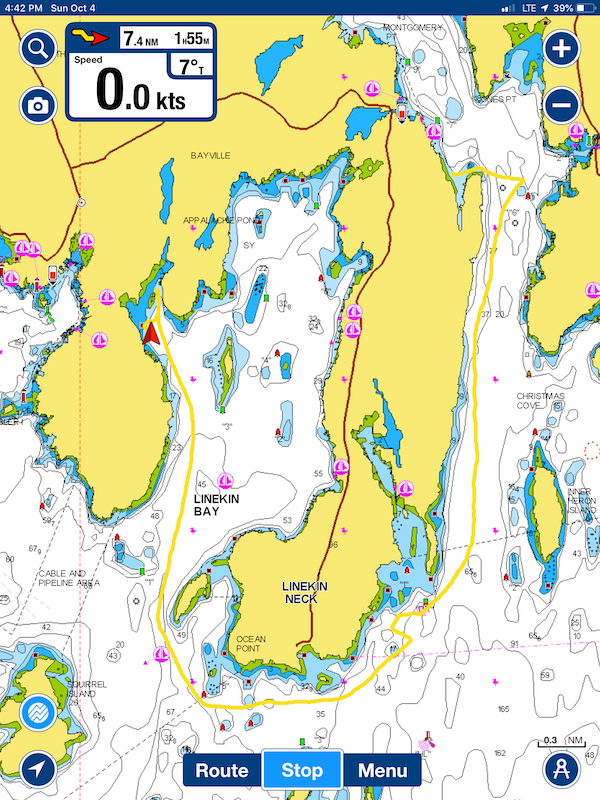 From Farham Cove I took a short sail around to Lewis Cove, in the northwest corner of Linekin Bay, just behind the town of Boothbay Harbor proper 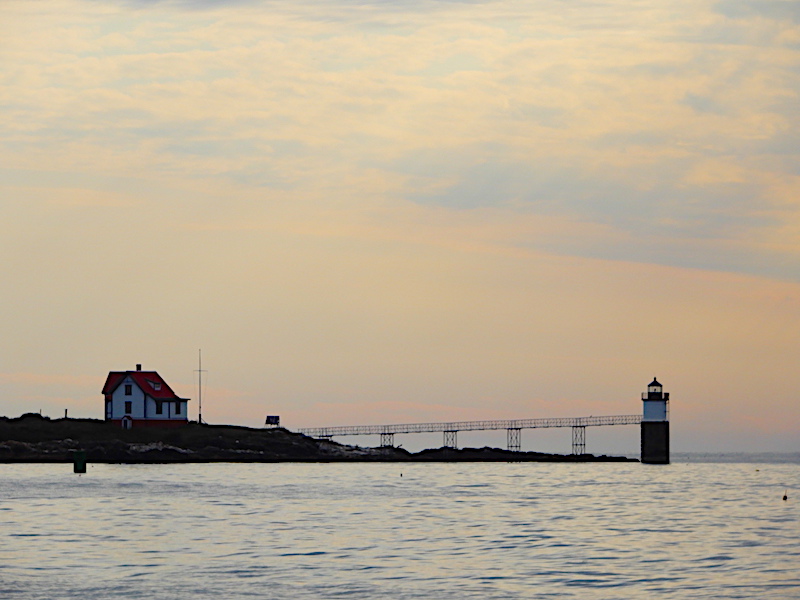 En route I sailed (again) past the lighthouse on Ram Island, on the south side of Fisherman Island Passage, seen here looking like autumn is indeed coming on 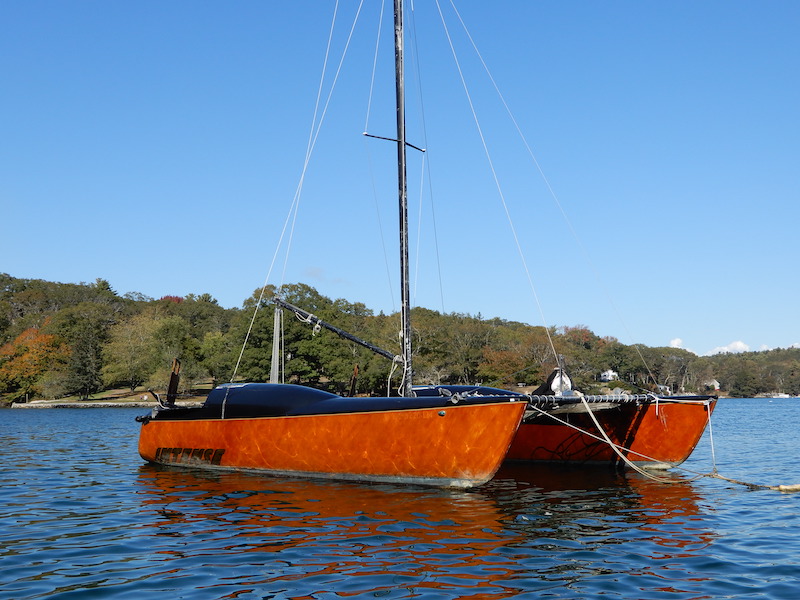 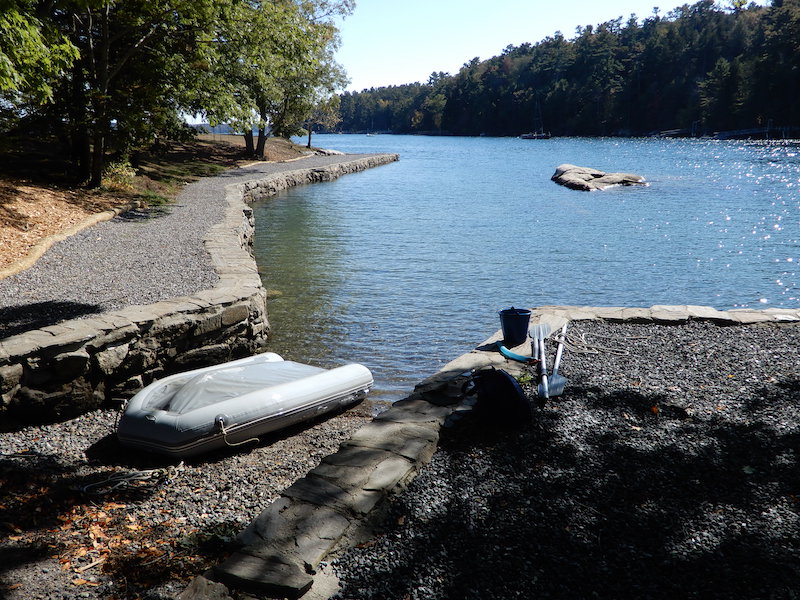 Also spotted: a great spot to haul the dinghy out for a quick scrub in Barrett Park, which overlooks the cove 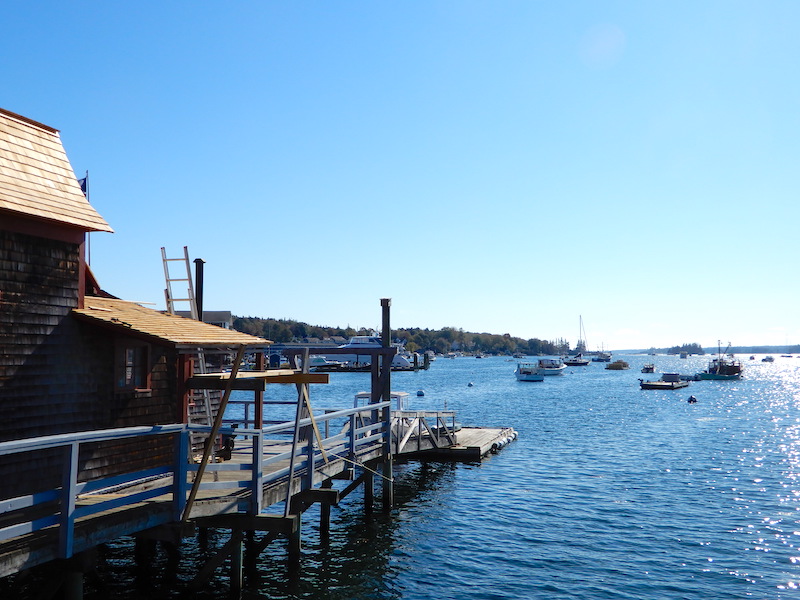 From Lewis Cove it’s a quick walk into Boothbay, where I entered town on the pedestrian bridge that spans the root of the harbor 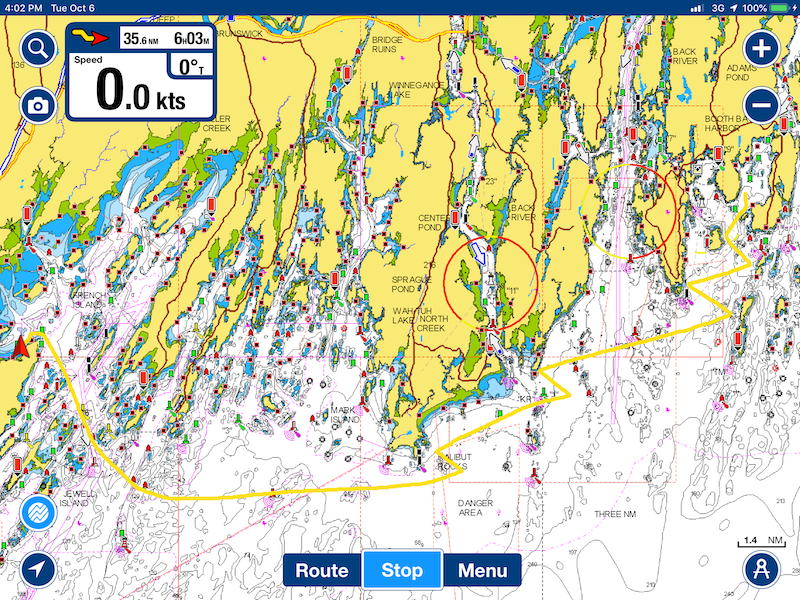 On the last full day of my cruise I beat my way from Linekin Bay back to Casco Bay, a rugged bit of sailing it turned out, with winds gusting into the high 20’s after I passed the mouth of the Kennebec River 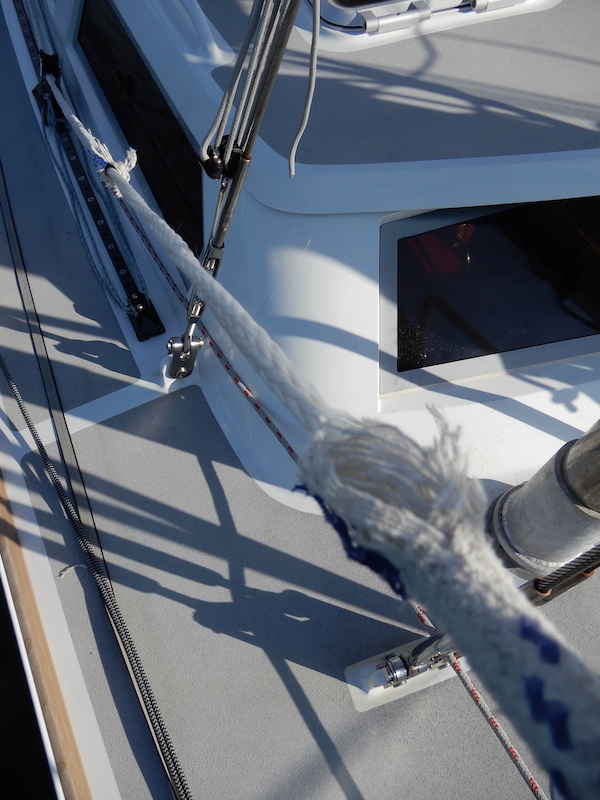 During one messed-up tack I managed to shred the cover on my starboard jib sheet. Never done that before! 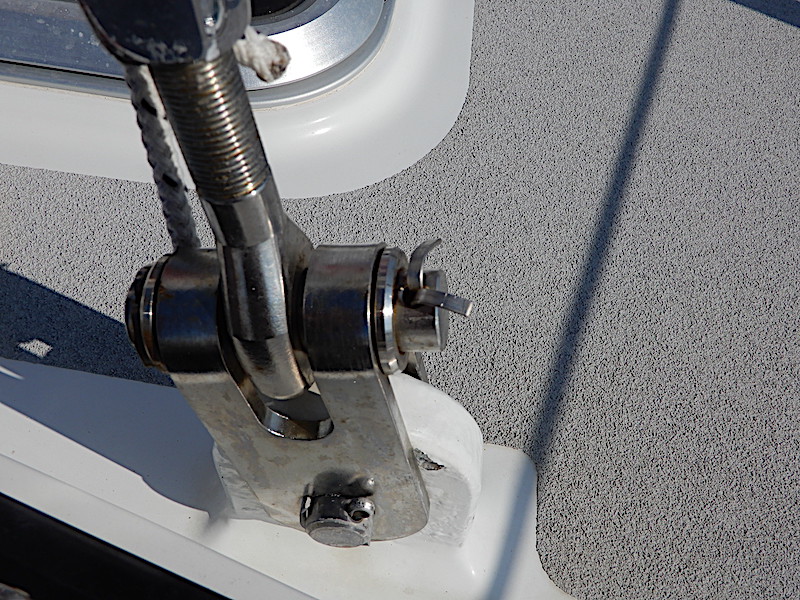 The culprit I reckon was this exposed cotter pin at the base of one shroud. These previously were not an issue when I had a staysail permanently in place. With my new easily removable staysail I’ll need to be sure these are all neatly taped when I relaunch next spring

Looking forward to that, I must say.

This just in from Jeff Stack at Maine Yacht Center, we’ve been discussing raising the waterline this winter… and perhaps adding graphics: 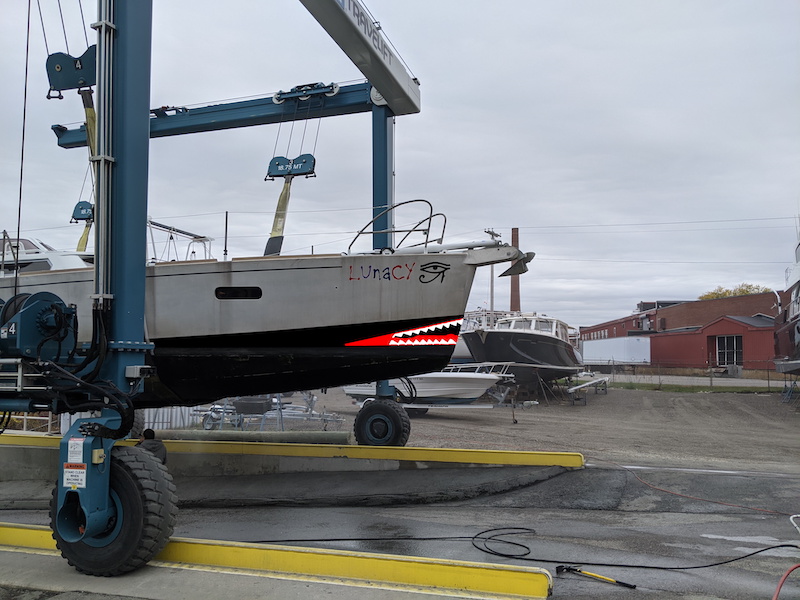