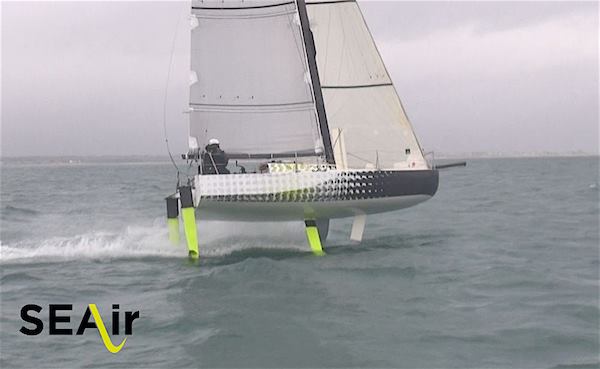 Here’s a photo that raised a few eyebrows a couple of weeks ago: David Raison’s famous 747 Mini 6.50 Prototype, the first scow-bowed Mini, pulling another first as it goes airborne flying on a foil. Makes you wonder what this year’s Mini Transat is going to be like, as I’m hearing rumors there are at least three Minis currently undergoing foil conversions. This 747 experiment is being conducted by SEAir, a French company that specializes in engineering and manufacturing hydrofoils, and they tell me it is just that, an experiment, and they do not plan to campaign the boat.

This isn’t the first Mini with foils. Some may recall an earlier effort, a Mini named Eight Cube, also dubbed “the Flying Frog,” that Swiss sailor Simon Koster raced in the 2015 Transat. This had foils canted inward on vertical shafts, as the class rule at the time was that max beam could never exceed 3 meters. 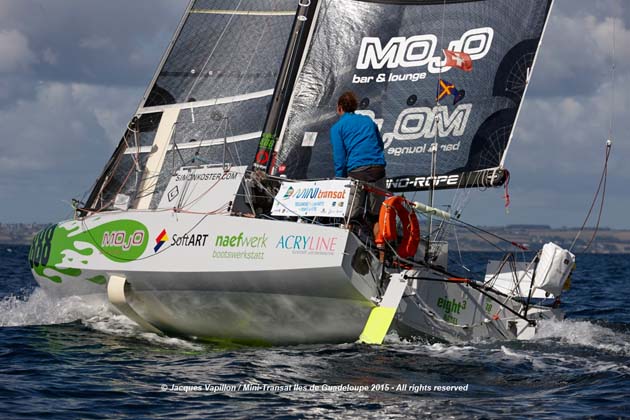 The Flying Frog in action

This boat had lots of complicated features. The rake of the foils could be adjusted with a line-controlled worm drive, the rake of the T-foil rudders was also adjustable, plus there was a telescoping canting keel that could also be rotated. Koster finished in the middle of the 2015 Mini Transat pack and remarked at the time he was still learning to sail the boat as he raced it. The foils on this boat, of course, were not capable of flying it, but they reportedly could lift about 60 percent of its total displacement.

Another foiling Mini built under the old rule came at the beam problem from a whole different angle. Instead putting inward canted foils on a fat Mini, British designer Hugh Welbourn tried drawing a skinny Mini with a flat horizontal DSS foil poking out the sides. 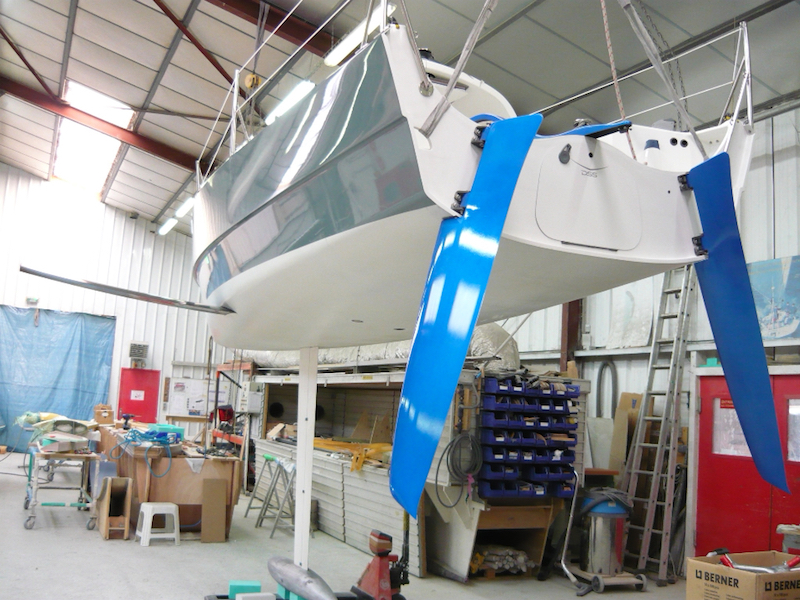 This boat was built by a French sailor, Dom Pedron, and has been sailed, but Dom has never raced it.

Since then the Mini rule has been rewritten. Now max beam is still 3 meters with all appendages housed, but expands to 6.5 meters when appendages are deployed. You’ll note the 747 Mini so far only boasts one hydrofoil on its port side, as SEAir wants to learn what it can from this one structure before designing and building more. It currently exceeds the new max beam limit with the foil out, but I’m told the foil could be trimmed to conform to the rule.

I also hear Eight Cube is currently being modified and that Simon Koster wants to run her in next year’s Route de Rhum. It will be very interesting to see what Version 2.0 looks like. And I am very curious to see if any of this year’s Mini Transat boats will be able to go airborne like the 747!

Another piece of big news, from back in December when it was introduced in Paris, is the new Figaro 3 design, being built by Beneteau as the first foiling production one-design monohull. 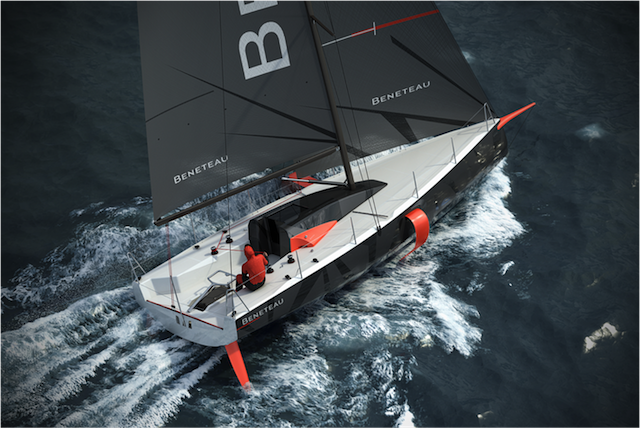 Artist’s rendition of the new Figaro 3

These boats sport unique inverted Dali foils, with the foil shaft up and only the foil tip exposed to the briny wetness. These obviously won’t be lifting the boat out of the water, but they will help the pared back keel combat leeway while also generating enough vertical lift to reduce the boat’s effective displacement by 900 pounds.

Here are some more drawings by Francois Chevalier: 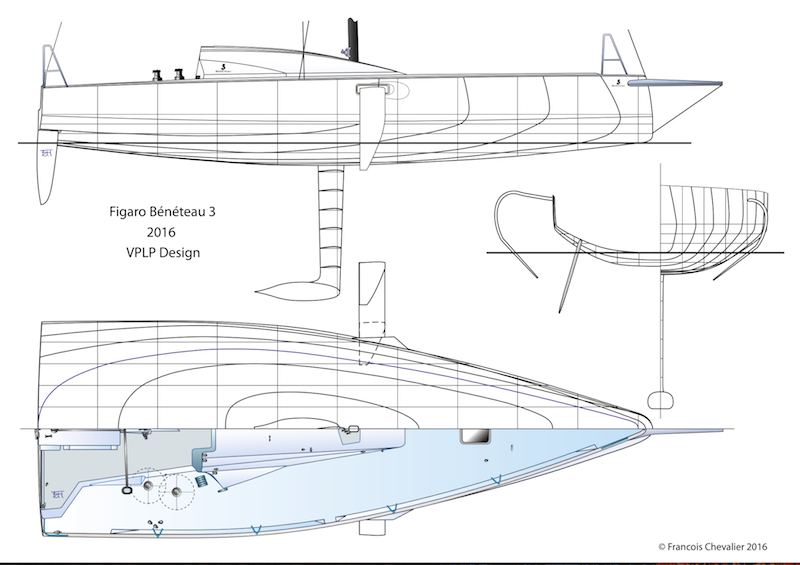 One big advantage of the upside-down foils, as you can see here, is that they are inside the boat’s max beam when fully retracted. Very handy for crowded marinas and starting lines! 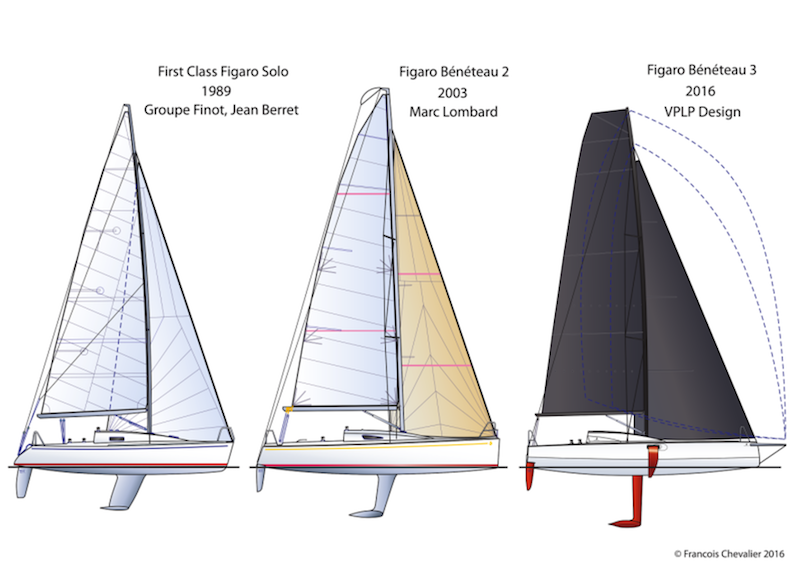 I know. You’re thinking this is a cruising blog, and all this has nothing to do with cruising. But it does! Problem is you’ll have to check out my feature on foiling monohulls in the April issue of SAIL to see how that works.

PS: Don’t write that comment yet! Yes, I do know that the 747 Mini is not the first flying keelboat. That distinction goes to the Quant 23, launched in 2015: 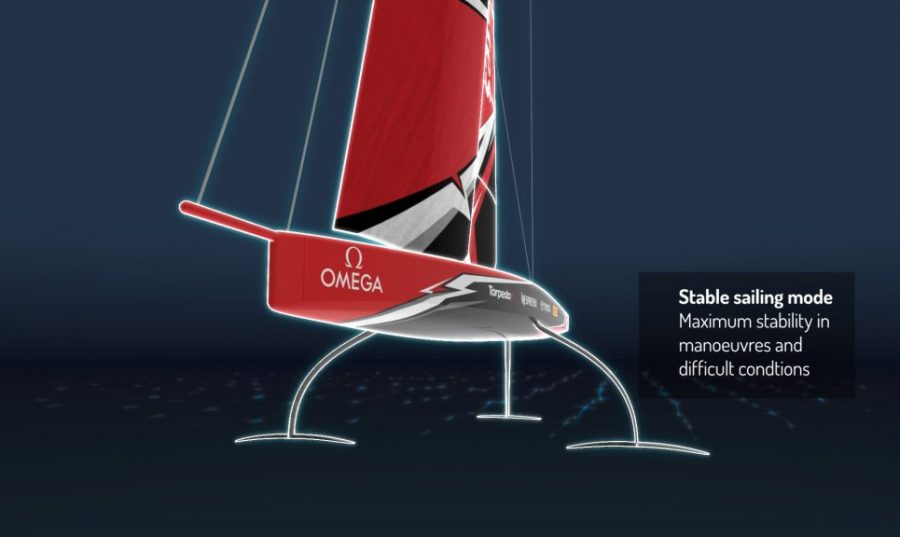 AMERICAS CUP 36: A Bold Leap Into the Unknown Aboard the New AC75 Foiling Monohull