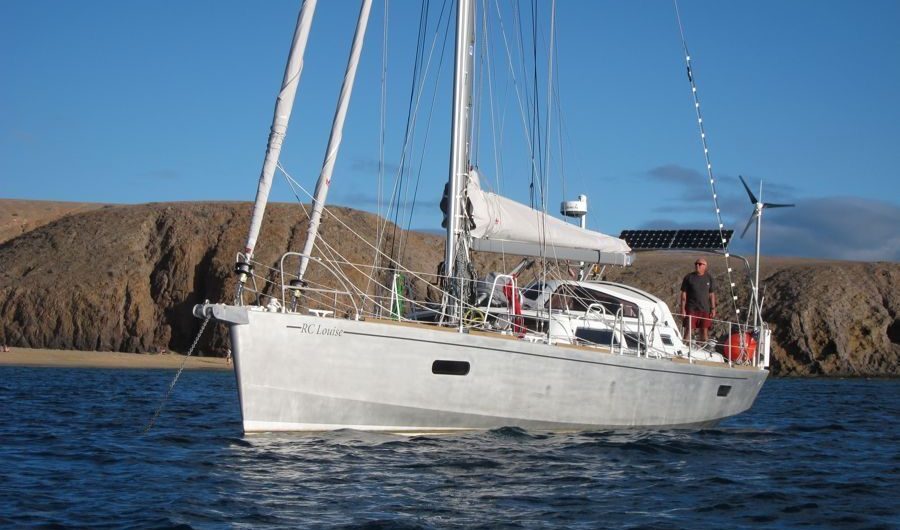 The primary reason I ordered a new Boreal rather than just buying a used one is that used ones very rarely come on the market. In fact, I’ve never seen one listed, until now. I met Steve and Tracy, owners of RC Louise, a Boreal 44, through a series of coincidences last summer and managed to lure them to my home in Portsmouth by shooting them an e-mail as they were sailing down the coast from Maine. We had a fine visit and I learned many useful things from them. Later I coincidentally ran into them again after sailing old Lunacy down to Annapolis to be sold. They have recently announced they are reluctantly selling RC Louise, which is now available for viewing, also in Annapolis. If you are interested in these boats you should definitely check her out. You are very unlikely to see another available in the U.S., or anywhere, anytime soon.

Here’s the pitch straight from Steve, with photos and captions stuck in by me:

Our beautiful 2013 Boreal 44, RC Louise, is for sale. Due to health issues and the call of our grandchildren, my wife and I are retiring from sailing. Being on the ocean from age 6 to 65 is enough for me!

The Boreal is the ultimate French aluminum centerboard expedition sailboat. If you can’t wait for the time it now takes for a new Boreal to be built, we have one for you. As far as we know, it is the only one on the market at this time. 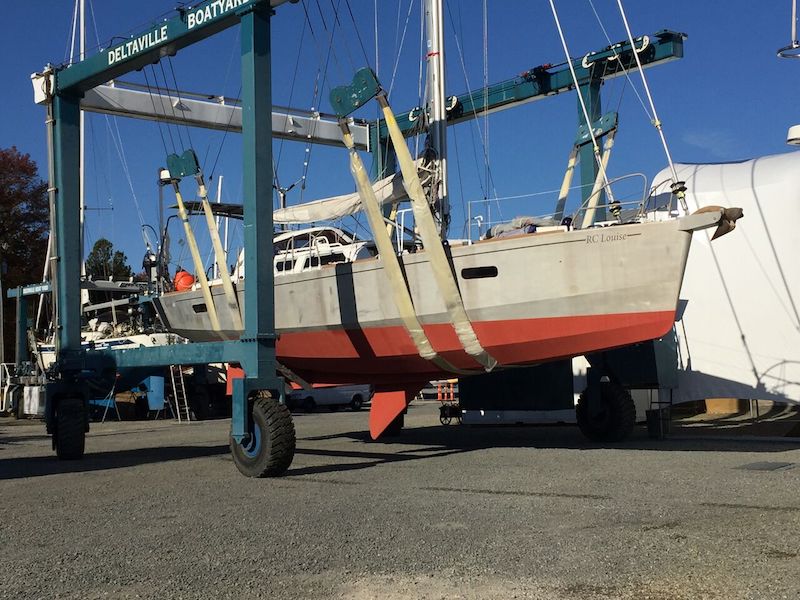 Hauled out with centerboard partially dropped. Here are also two daggerboards, not seen here, on either side of the centerline rudder 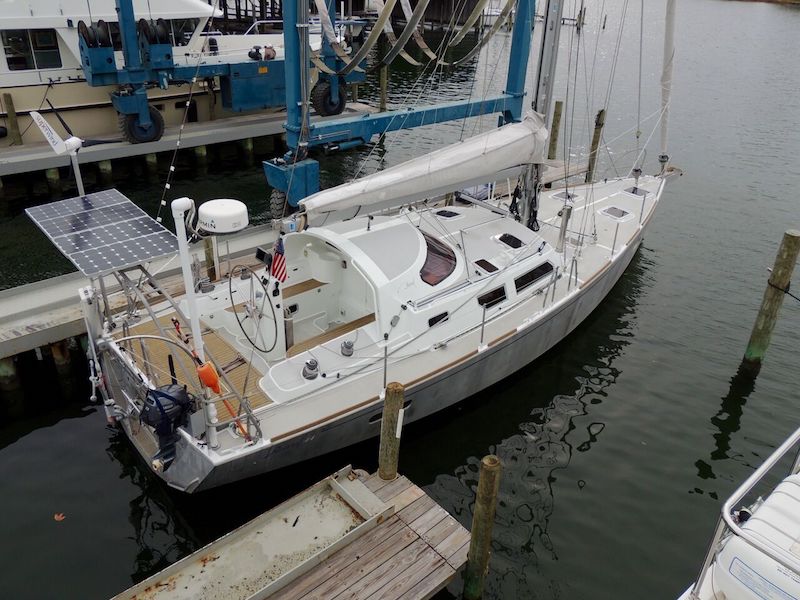 Aerial view. Pardon me for saying so, but I think these are exceptionally attractive boats

RC Louise is fast, seakindly and strong, a proven ocean-crossing machine. She is made to go to high latitudes or exotic tropical Islands where her one meter draft with the centerboard up makes her perfect to get into places few boats can go. Many Boreals have sailed to Antartica and South Georgia Island; we were on our way to the remote Caroline Islands and the jungle rivers of Borneo before plans changed.

Boreal won the 2015 European bluewater boat of the year, beating out Allures and Jimmy Cornell’s Garcia expedition boat. In comparison, the Boreal has an all aluminum deck/cabin/doghouse and has a protected single rudder and prop instead of two exposed twin rudders and exposed prop. The Boreal has a watertight doghouse with a 360-degree view, and a wide keel box with 10,000 lbs of encapsulated lead, which enhances stability. 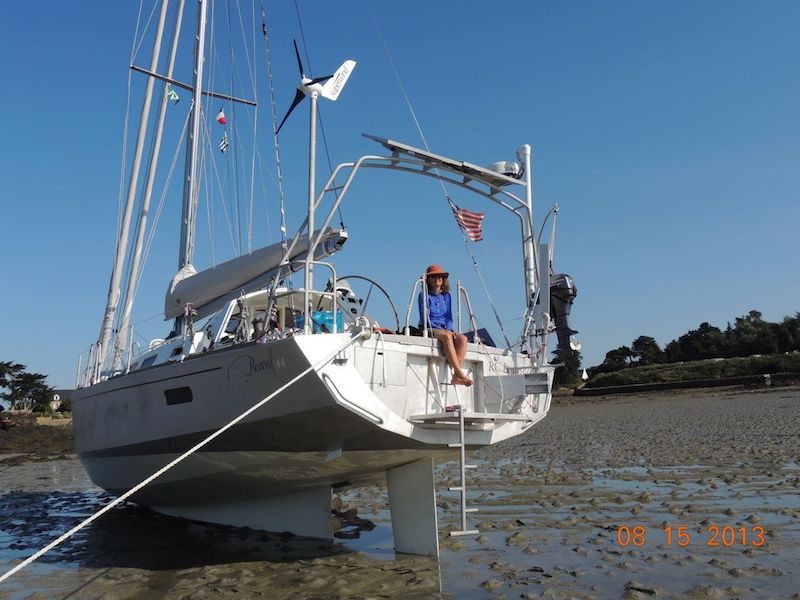 Drying out is no problem. The 44-footer has a flush transom with a fold-down boarding platform, but is otherwise identical to the 47, which has a transom skirt. The stern arch on RC Louise is unique with a tubular frame, unlike the stock solid arch, and has more headroom under it 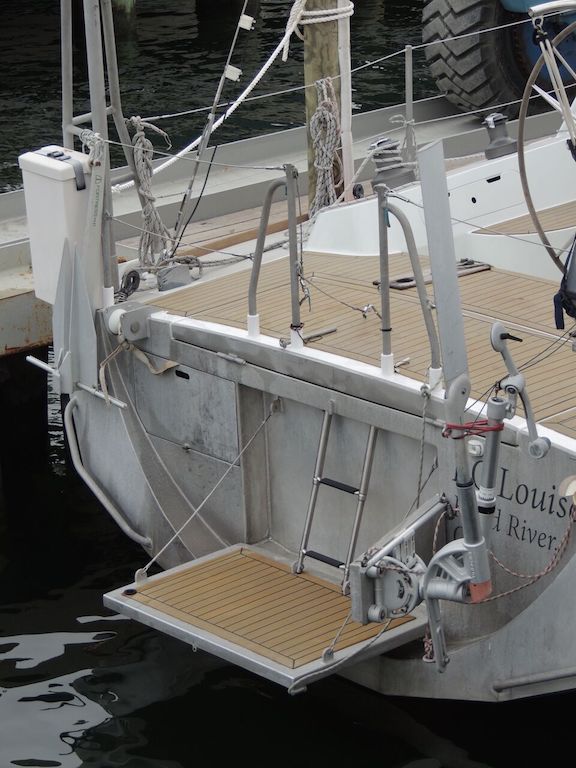 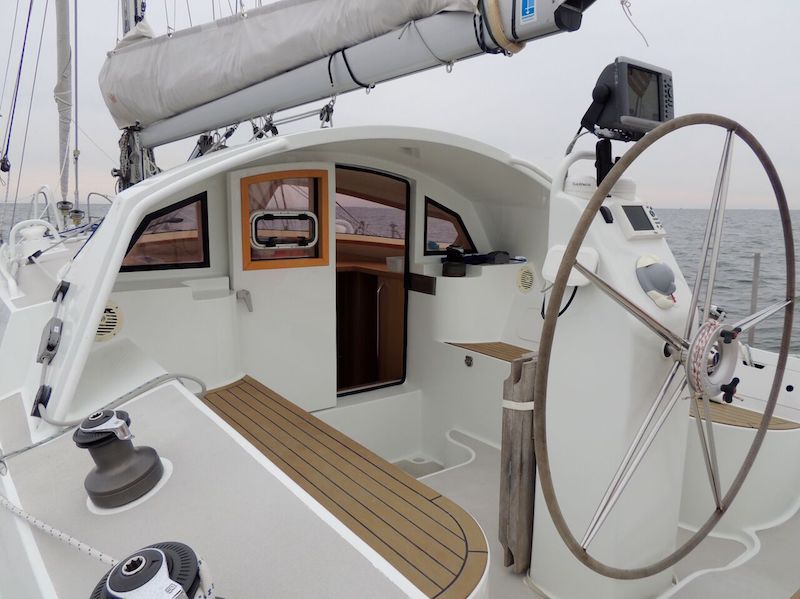 The interior is European ash, which makes it light and airy. The layout includes a double forward cabin berth with head, one quarter berth with two singles, one quarter berth with a double, and a second head aft of the galley. The salon is raised with a welcoming table, which also drops down to a huge berth. There are good handholds and capacious storage throughout. The three inches of insulation and the central Refleks diesel heating stove plus radiators in each sleeping cabin makes a Boreal warm and comfortable at high latitudes. The three inches of insulation keeps the boat cool below decks in the afternoon tropical sun.

The rig is a cutter with a full-batten Elvstrom Hydranet main, genoa, and self-tacking staysail, as well as a gennaker. We think one key to sailing performance is the two stern daggerboards. Drop the lee daggerboard going to weather, beam reach or a broad reach and you feel like you are on a railroad track, straight and true. Whether you are using the NKE autopilot or the WindPilot self-steering vane, RC Louise’s helm hardly moves. The centerboard can be adjusted up or down from the helm by hydraulic ram and from the mast manually using a winch. 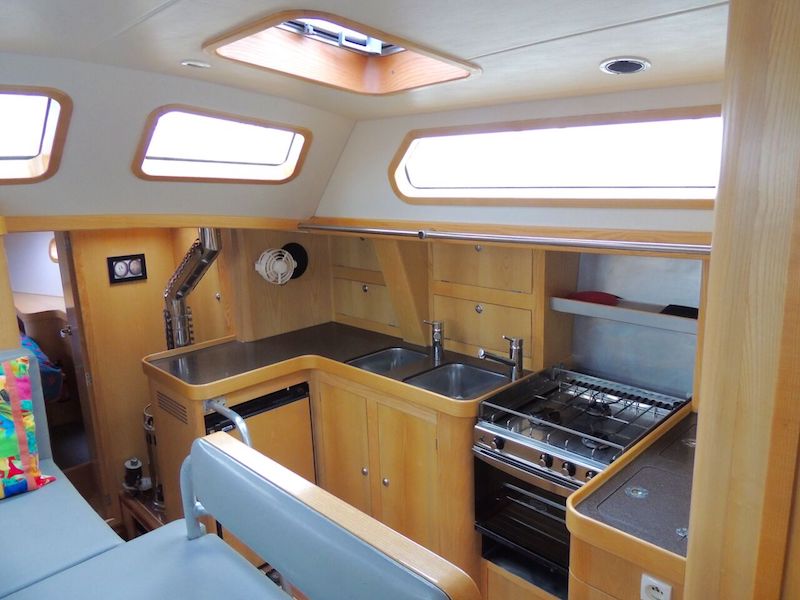 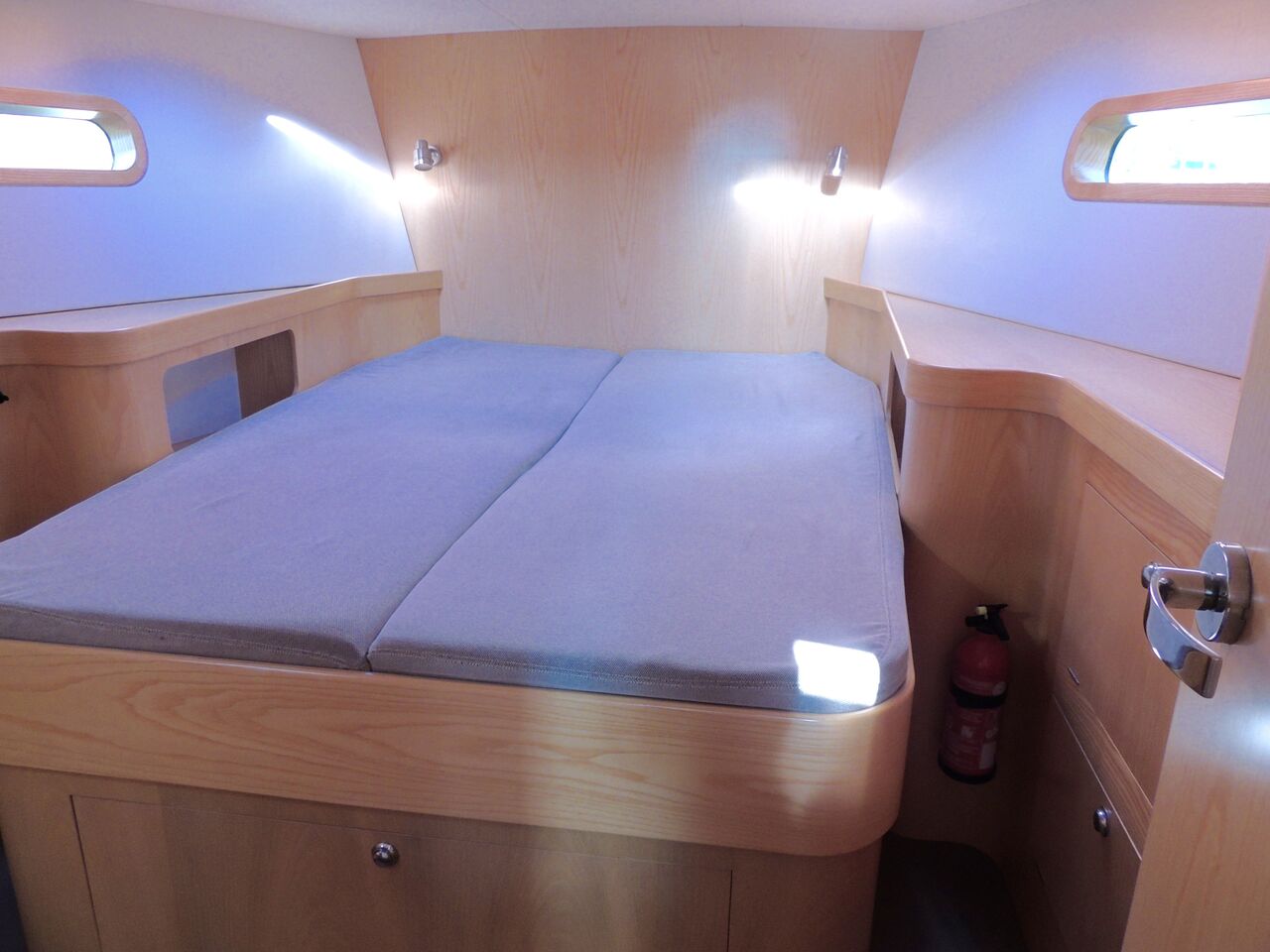 The spacious master stateroom is forward 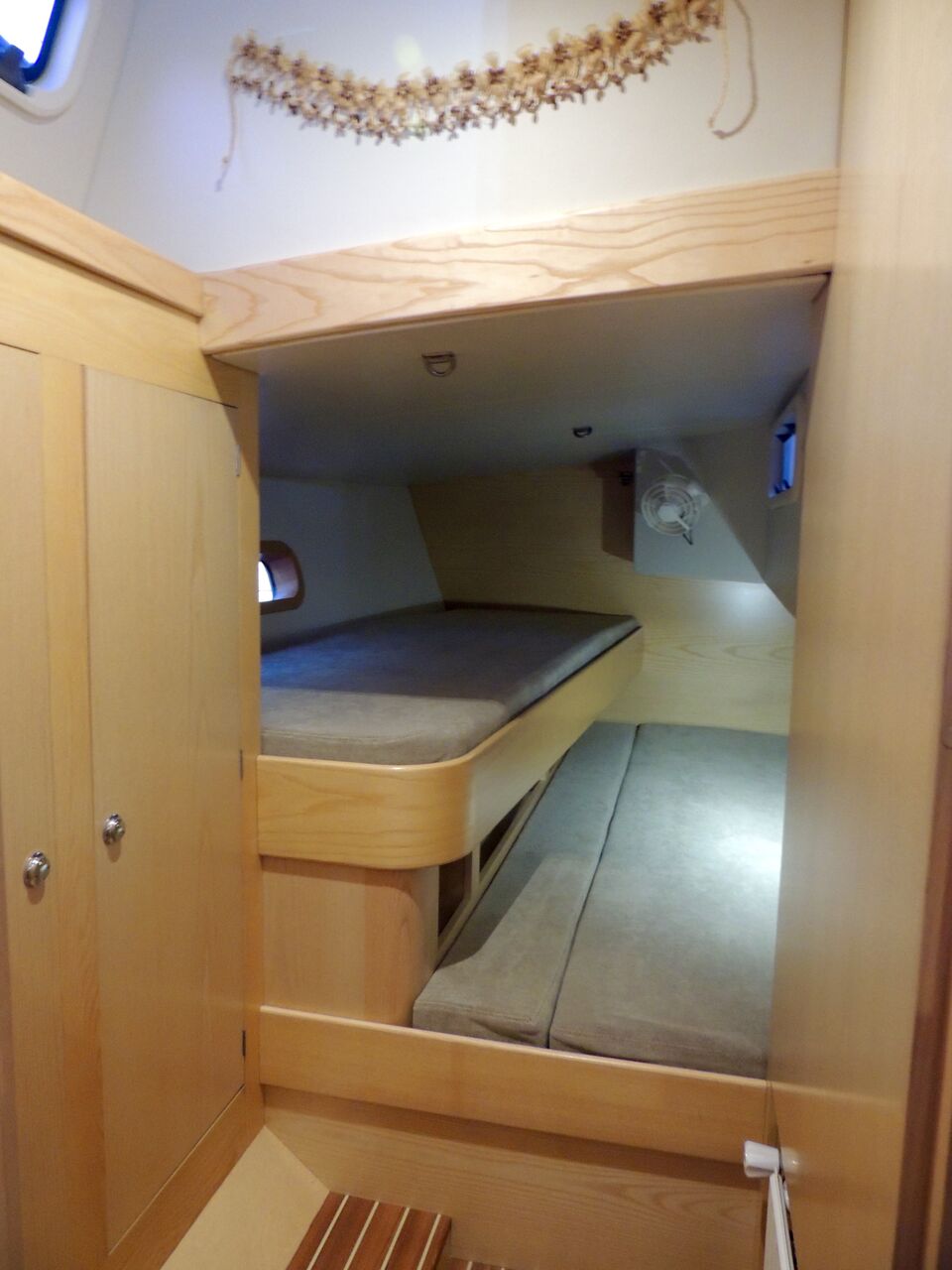 One of the two aft staterooms, with split single berths

Just a few other things we love about the Boreal 44: the watertight stern lazarette is huge. This keeps not only the deck clean and safe, but allows immediate full access to the quadrant. On ocean passages we put the inflatable down below along with the 8-HP outboard on a dedicated bracket. The forward lazarette with its ice-breaking bow is also watertight and large. The windlass and chain-locker are just in front of the mast and keeps 100 meters of chain weight in the center of the boat. The engine room has amazing access to sit and work from under the companionway steps, which raise easily on a hinge, and also from a door in the port aft cabin. It is the most seakindly boat we have ever owned; Tracy always got the three-day seasickness on our Mason 44 and could never read at sea, but on the Boreal she does not get sick and reads for hours in mid-ocean. Recent maintenance has been extensive, including new safety lines, rigging inspection and tune, bottom paint.

All our gear is included: liferaft, Iridium satphone, copious spares, dinghy, and much more.

She is on the hard in Annapolis, MD, US. Broker: Rogue Wave Yacht Sales.

Editor’s Note: If you do trek to Annapolis to see RC Louise and conclude she is a bit too large and expensive for your taste and budget I urge you to also examine a more modest aluminum craft, my old Lunacy, also listed by Rogue Wave.