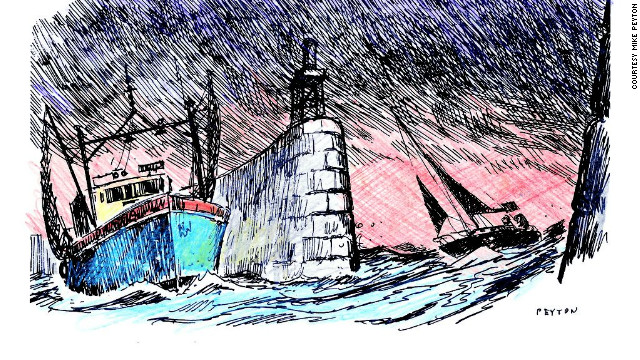 I never met Mike Peyton, but I always wished I had. In my younger days I drew a lot of cartoons, and I also enjoyed sailing of course, and when I got older and somehow fashioned a career of sorts out of writing about boats I always thought it would be super-cool to draw cartoons about them too. The only guy I ever knew of who actually did that was Mike Peyton, who passed on last night at age 96. I knew his work mostly from the many issues of the British magazine Yachting Monthly that I devoured over the years, so it was only appropriate that I learned of Mike’s passing through YM’s ex-editor-in-chief Paul Gelder, who sent on the following:

Mike Peyton died last night aged 96. I just had a call from his daughter, Veronica. Mike had been ill for quite a few days and had gone into a hospice a few days ago… he died peacefully, I’m told. Despite losing his sight over the later years (what can be worse for an artist?) he somehow kept his morale up, although he had to sell his beloved boat, Touchstone. It was a standing joke that following his other ferro-cement boats, called Loadstone, Brimstone, his next would be named be Tombstone!

I’m so glad Mike lived to receive the Special Lifetime Achievement award that I presented to him last year on behalf of the Yachting Journalists’ Association. It was the day after David Bowie died, and the press had dubbed Bowie “the Picasso of pop” … so I said in my speech, Mike must be the Picasso of sailing!

One of the greatest pleasures of working at Yachting Monthly was opening an envelope each month with Mike’s colourful cartoons. His illustrations for our monthly Confessional series, where readers own up in print to their most embarrassing sailing moments, were priceless. I’d read the Confessional for years as a subscriber to the magazine and when I joined as Features Editor, in 1990, I got to edit the Confessions pages – for 22 years!

I didn’t want to give it up to anyone else so I carried on his editor! With Adlard Coles, we published two books of readers’ sailing Confessions, illustrated by Mike. And, of course, Dick Durham wrote Mike’s biog, Peyton: The World’s Greatest Yachting Cartoonist.

It’s not known so widely, that Mike was also a brilliant writer of cruising stories, which, of course, he illustrated himself. His style was incredibly varied, as you can see in the montage of his drawings in the YouTube link below.

Here’s another little bit of prose that Paul uttered out loud when honoring Mike on behalf of the Yachting Journalist’s Association:

He has a mischievous sense of fun informed by his exploits afloat. After studying at Manchester Art School, he bought a 12ft canvas sailing canoe from a man in a pub and worked his way down the River Thames… sleeping on moored barges. He fried his breakfast on a primus stove under the shadow of Big Ben. The smell of sizzling bacon has never left his boats.

Eventually, he reached salt water and learned about tides and how to reef sails. His first proper boat was called Vagrant ‘because she had no visible means of support.’

In those days sailors wore peaked caps and ensigns were lowered at sunset. Not surprisingly, our man felt the need to stick a pin in the balloon of snooty sailors.

With a few squiggly lines from his pen he took us all to the heart and soul of sailing… and sailing’s cock-ups. He’s been a unique commentator on the sailing scene for more than 60 years. He once told me he gets his best ideas sitting in the bath. Perhaps it’s the catalyst of being surrounded by water instead of East Coast mud!

His humour is gentle rather than vulgar, brash or cruel. As well as a superb draughtsman, he has a winning way with words, whether it’s a clever punch line, a headline or a caption. He is a great story-teller–as anyone who has sat beside the glowing coal stove in his cosy saloons can testify.

And damn, if you google the man, you’ll find (via Wikipedia) that he had more on his mind than boats:

Mike Peyton was born into a mining family in County Durham, the son of a disabled First World War veteran. Having lied about his age to join the army himself, he was seconded by the intelligence corps to draw maps of the North African desert during the Second World War. Despite escaping twice he spent most of the war in a prisoner of war camp. Freed by the advancing Soviet army, he fought alongside Russian troops as they invaded Nazi Germany from the East.

After the war Peyton worked as a freelance cartoonist for the New Scientist for 35 years, as well as contributing cartoons to a wide range of magazines, including the Church of England Times, Corsetry & Underwear, Practical Boat Owner and Yachting Monthly.

I’ve looked, but I can’t find any of his underwear cartoons online. But I have found some outstanding boat drawings: 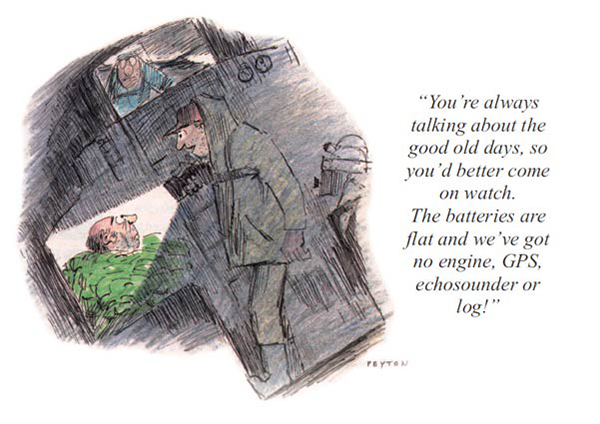 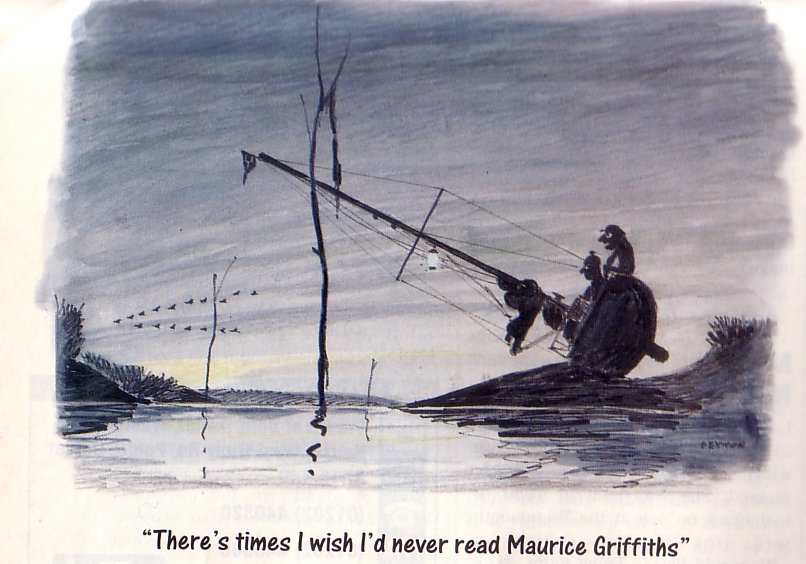 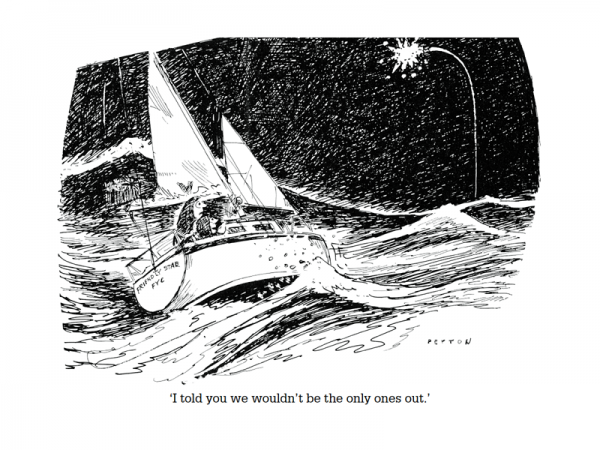 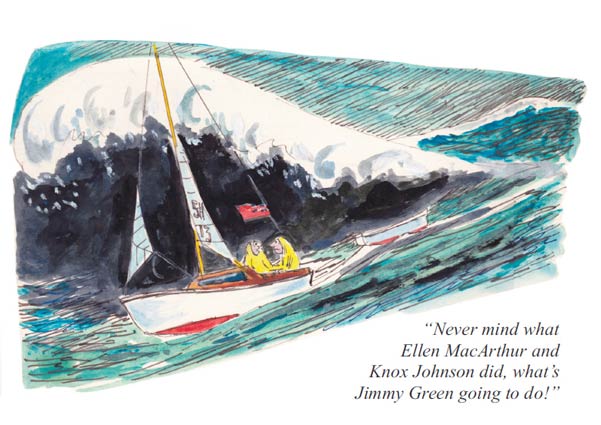 If you want to read Dick Durham’s “biog”… 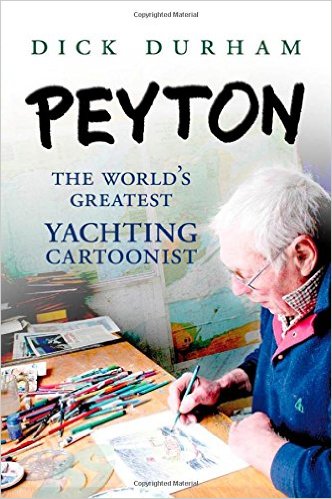 …you can buy it here.

Lastly I’ll share a photo from Paul, of Mike and his wife Kath together on a boat (not theirs), circa 2008. 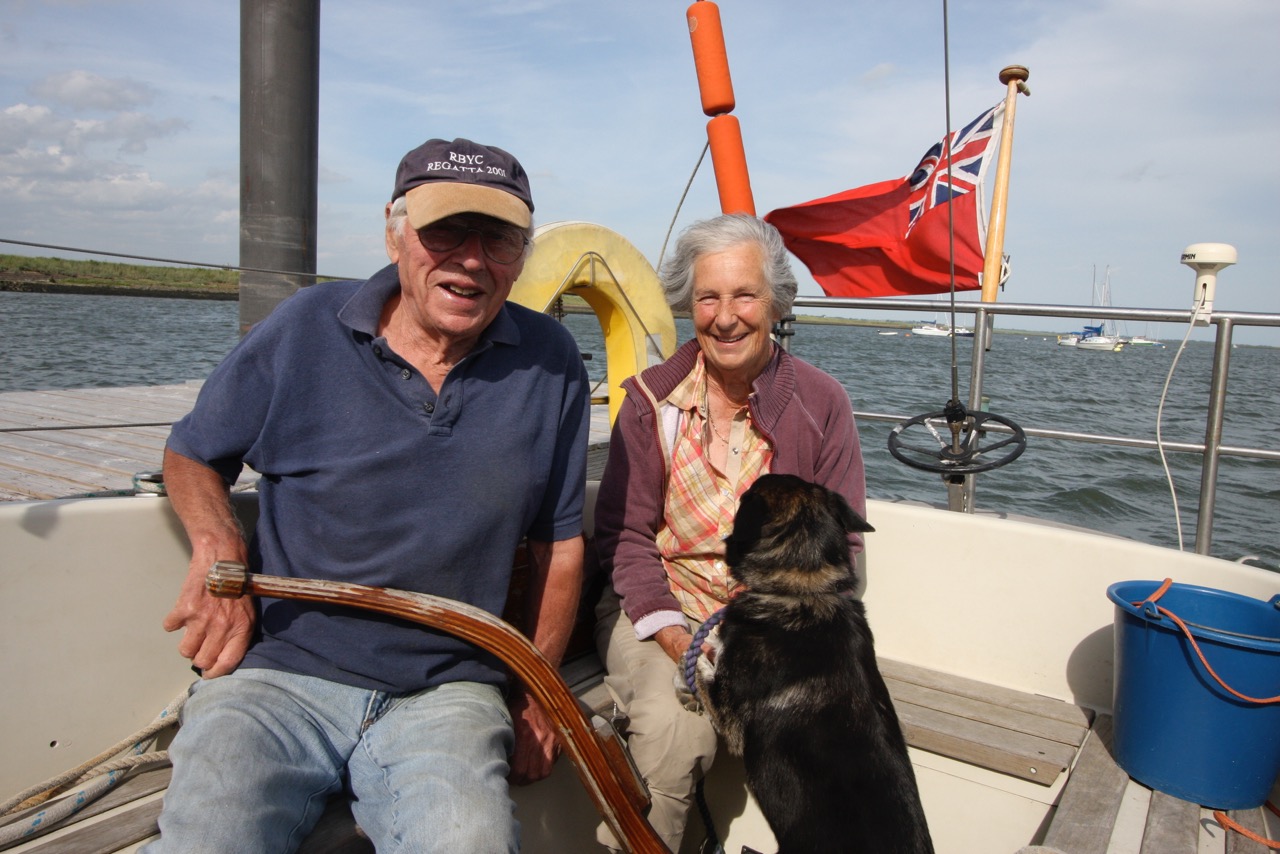 May he rest in peace.

0Shares
magazinesobituary
Previous Post2016 VENDEE GLOBE: Le Cleac’h Is Victorious!Next PostBE GOOD TOO REVISITED: The EPIRB Question, Why She Didn’t Sink, What Happened to Gunther, and a Shameless Book Plug