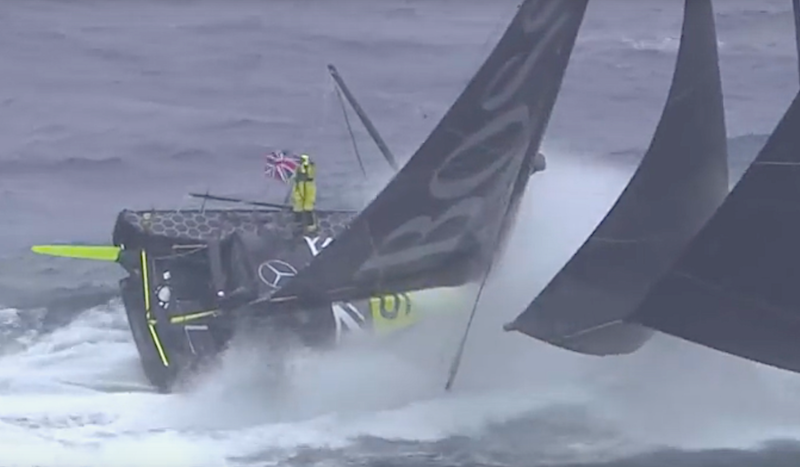 What a nail-biter! Alex Thomson on Hugo Boss and Armel Le Cleac’h on Banque Populaire have been swapping places at the front of the Vendée Globe fleet for some time now and are deep in the Southern Ocean, not too far west of the longitude of Cape Leeuwin at the southwestern tip of Australia. Le Cleac’h is the French heir apparent favored to win the race at the outset; Thomson is the Great Anglophone Hope, the only non-French competitor to have any chance of winning the race since Ellen MacArthur came a close second to Michel Desjoyeaux way back in 2001.

The ugly twist: Thomson has broken off his starboard J-foil (just as Ellen MacArthur lost one daggerboard after rounding Cape Horn in the 2000-01 race) and is essentially fighting with one hand tied behind his back. As the image up top suggests, when sailing on port tack Hugo Boss is a bit tender.

A few days ago the French Navy sent out a ship with a helo pad from the Kerguelen Islands and launched their chopper to make a spectacular video of the two boats racing by.

Here you can see pretty clearly how much on the edge Thomson must sail while on port tack to stay competitive. It seems his strategy is to pile on sail while keeping the rig short. Where Banque Pop is loping along under a single-reefed mainsail and a masthead gennaker, Hugo Boss is burying her rail under a double-reefed main with a fractional genoa and staysail flying. Banque Pop, you’ll note, is sailing a whole lot flatter than Hugo Boss.

It amazes me that Thomson is doing as well as he is. There was some specious speculation that he was sandbagging everyone, claiming he’d broken a foil when he hadn’t, but the video makes it clear this is not the case. Look carefully and you’ll see the jagged bit of broken board sticking out the starboard side (when it isn’t totally buried underwater). Even if you couldn’t see the broken board, the difference in the attitude of the two boats makes it clear Boss is indeed crippled on this tack.

In another video published just today we find Thomson sailing on starboard tack within sight of Le Cleac’h, who is in a bit better breeze and passes him by (again).

Right now, as I write, Thomson is 15 miles behind Le Cleac’h and both are sailing on port tack.

Meanwhile, much further back in the fleet, Rich Wilson is doing quite well on Great American IV, running in 20th place ahead of five other boats. (Of the 29 boats that started, so far four have had to drop out.) Just yesterday he crossed from the western to eastern hemisphere west of the Cape of Good Hope.

You can follow Rich’s daily log on SAILfeed. To get an idea of how hard it is to sail one of these boats alone, I suggest you check out his description of the tacking procedure.