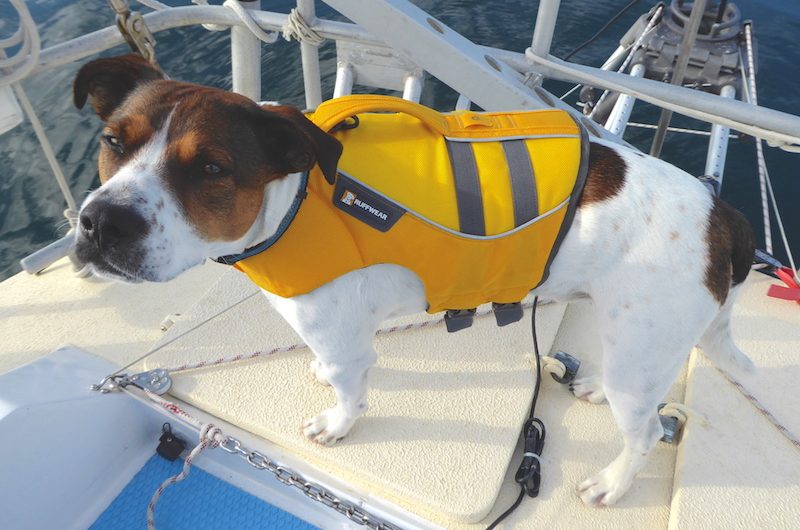 There were some suggestions after I introduced Baxter here that I needed to get him a life-jacket. I knew this, of course, and wanted one as much for the handle on the back, so I could heave the beast more easily in and out of a tender, as for the flotation. You see him here, modeling his new Ruffwear vest during our recent week-long cruise from Portland to Rockland, and as the expression on his face suggests he doesn’t really mind it a bit. Indeed, by the end of our time together he had deduced that being asked to wear the jacket while aboard Lunacy meant an opportunity to go ashore, and he eagerly wagged his tail whenever I picked it up.

But I am getting ahead of myself. On first loading Baxter and a week’s worth of luggage and provisions on to Lunacy in Portland Harbor the Tuesday before last, in a wake-ravaged mooring field with no one to assist me, I wasn’t at all certain how this would go. To play it safe I took Baxter and all the stuff out to the boat in two separate dinghy runs. This went well enough, to my relief, but our very next dinghy expedition to and from shore, after we sailed over to nearby Cliff Island and picked up a mooring for the night, wasn’t quite so sublime. 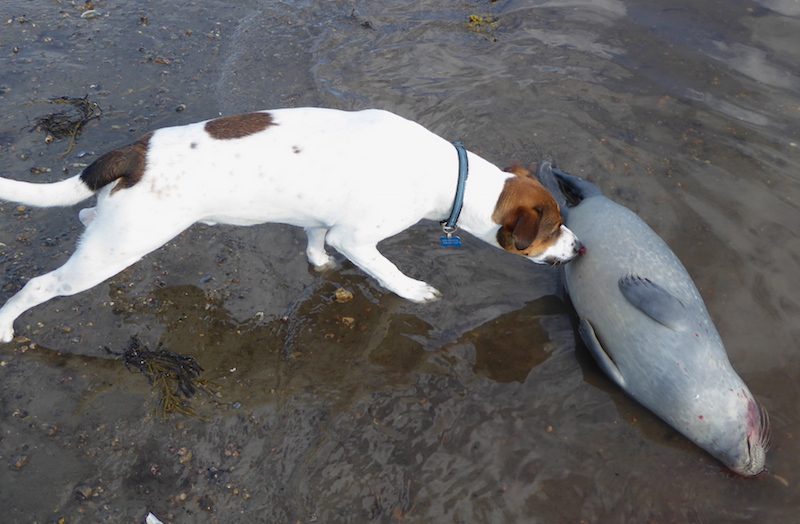 A major point of interest (particularly if you are a dog) encountered on our very first shore excursion: a dead baby seal on the beach at Cliff Island. Baxter seemed as spooked by it as I was. He sniffed its bloody navel, but came away instantly when called

Returning to the boat in the dinghy after our walk ashore my approach up to Lunacy’s transom was a bit fast, to compensate for a big gust of wind that fell on us. I don’t know what Baxter was thinking; I guess maybe he was worried we would crash. In any event, as I was busy grabbing Lunacy’s transom skirt and cushioning our landing on one side of the dinghy, Baxter was busy jumping overboard on the other side. Big splash! Even with his life-jacket on he sank like a stone. Buoyancy did eventually assert itself, and I grabbed the poor animal by the jacket handle and heaved him back aboard as soon as his head appeared above water again.

I’m guessing it was the first time anything like that had happened to him, as he looked most befuddled. Every time we were in the dinghy together after that, I repeatedly admonished him to stay in the boat. Stay in the boat! But I don’t really think he needed the reminder.

As for our itinerary, I hoped I might convince Baxter to relieve himself on deck, as this would save us from having to stop and go ashore quite so often. I had optimistically developed a plan: I bought a new doormat and a bottle of some special dog-waste marking solution, which I sprayed on the mat. I laid out the impregnated mat on the foredeck, close to the anchor wash-down hose. Baxter, I envisioned, would be inspired by his nose to pass waste on the mat, and I could then easily wash it overboard. 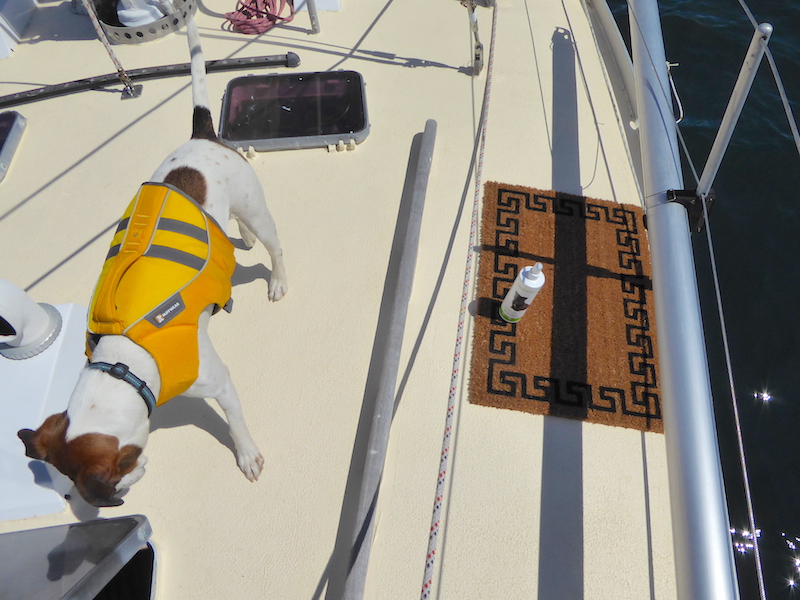 Baxter, the mat, and the bottle of marking spray

No such luck. Even after I sprayed a pint or so of solution all over the mat, Baxter evinced little interest in it, though he was eventually inspired to lick it to see what it tasted like. He certainly never showed any sign of wanting to piss or crap on it. Much later, after we reached Rockland and had my old friend Ben Ellison (of Panbo fame) aboard for a visit, I realized how delusional my scheme had been. Ben told me the tale of a boat dog he had as a young man, some sort of spaniel, and of the ordeal it suffered before it finally did its business onboard. It was bottled up holding everything in for days during its first offshore passage and in the end only relieved itself when it was frightened out of its mind on a spray-drenched foredeck in the midst of a roaring gale.

I realized that achieving such a result on a coastal cruise with land always in sight would require some discipline and also probably some sadistic willingness to watch an animal suffer. Lacking such instincts, and with Baxter resolutely ignoring the mat, I scheduled many pit-stops as we charted our course down the coast.

For example: on day two of our cruise we first went ashore again on Cliff Island in the early morning, then in the late morning we motored over to Jewell Island, directly adjacent, had some lunch, and went ashore yet again there. By then I had hoped some sea-breeze would fill in to waft us off to the east, but temps onshore never got hot enough to get the old convection pump working. So in the afternoon we motorsailed a relatively short distance across Casco Bay to Sebasco, where, yes, we again immediately went ashore for a walk. 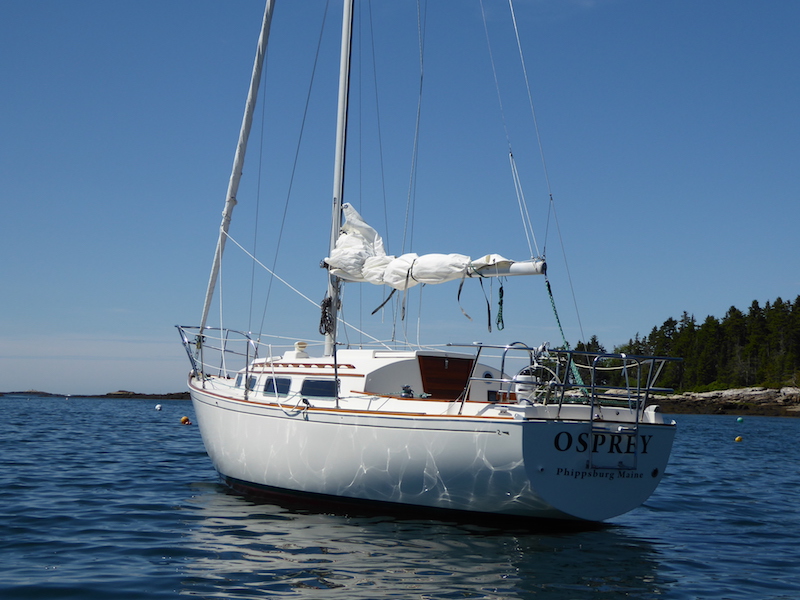 At Sebasco I was a little surprised to find this boat, a Sabre 28 that normally is moored on the other side of the Phippsburg isthmus at Popham Beach. As mentioned in an earlier post, I have admired (and once coveted) this boat ever since it first appeared on this part of the coast back in my high-school days

The following day Baxter again got both an early- and late-morning walk ashore, and then, thankfully, shortly before noon I saw clouds starting to rise over the land behind us to the north. I immediately cast off our mooring, and by the time we had motored a short distance down to the mouth of the New Meadows River the sea-breeze had filled in nicely. 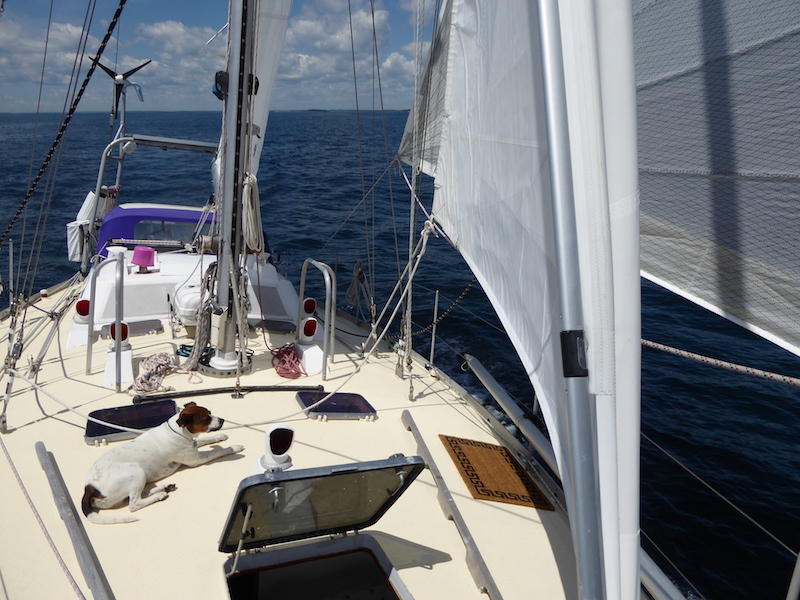 Baxter lounges on the foredeck as we sail east under a full mainsail, the big screecher, and the staysail

We enjoyed a tremendous quantum-leap of a sail, coasting past first Seguin, then Damariscove, and even Monhegan in only a matter of hours. We arrived finally in the early evening at Burnt Island, inside Monhegan, where I hadn’t stopped in many years. The approach was exquisite, as the wind carried us easily down the channel between Burnt and Allen Islands, and then around to the Burnt Island anchorage. I started up the engine just in case, but never had to use it and got the anchor down without ever putting it in gear. 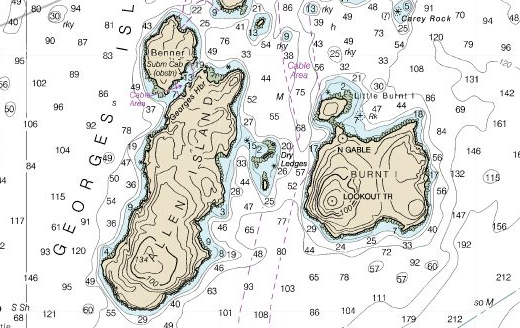 Allen and Burnt Islands, about 7 miles north of Monhegan. Our anchorage was on the north side of Burnt, between it and Little Burnt 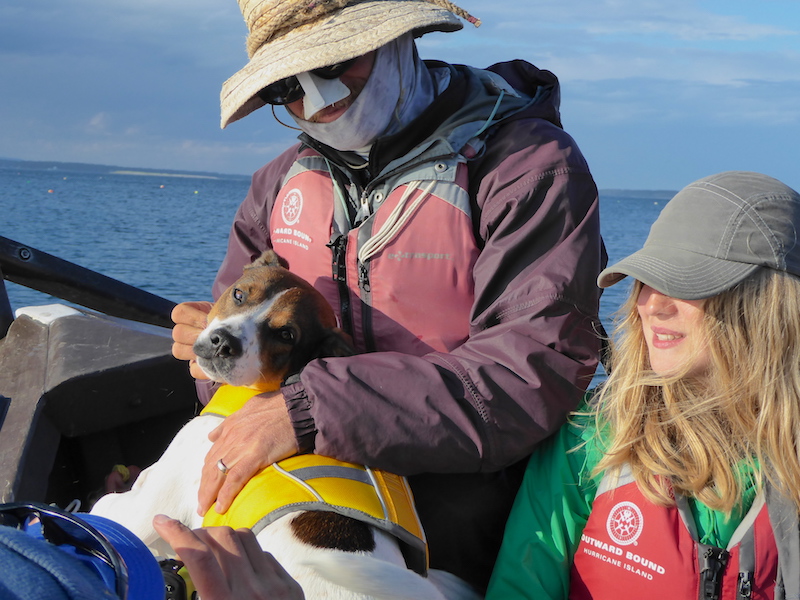 We shared the anchorage with a pulling boat from Outward Bound and stopped by in the dinghy to say hello. Baxter immediately leapt into their boat and gave everybody face-licks 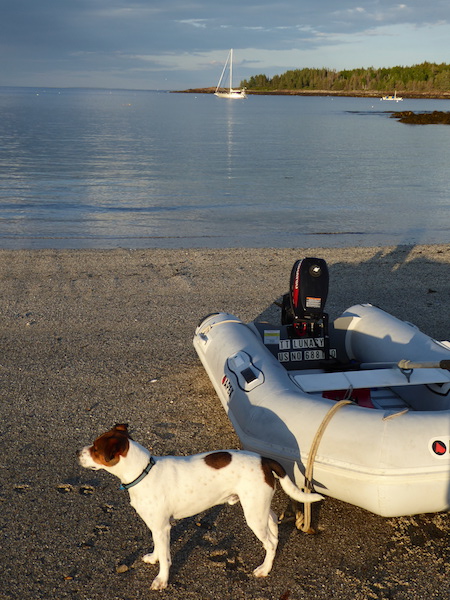 Baxter ashore on Burnt Island, striking a dignified pose. Immediately prior to this he was doing a crazy happy dance all over the beach. In the distance you can see Lunacy (left) and the Outward Bound boat with its tent erected (right)

Going ashore on the island, I noticed three things: 1) Baxter was definitely getting the hang of getting in and out of the dinghy on his own; 2) when strolling around in unfamiliar places he is very well-behaved off a lead (a valuable attribute in any boat dog); and 3) the interior of Burnt Island has changed an awful lot. Last time I visited, almost 20 years ago, there was just one house here, with a network of thin trails and fairly mature growth inland. Now there are a few new cabins, a network of bulldozed dirt roads, and much recent growth, with many of the older trees blown or cut down. There was also a sign that said No Dogs Allowed, but Baxter fortunately cannot read. Going ashore again in the morning we found three more dogs on the beach who also could not read. They and Baxter had a fantastic time together celebrating their illiteracy.

We got underway early that morning, resigning ourselves to some pre-sea-breeze motoring, as I wanted to stop at the Dix/High Island anchorage in Muscle Ridge Channel on the way up to Rockland. This again was a once favorite spot I hadn’t visited in many years, and I was relieved to find little had changed. High Island, site of an abandoned granite quarry, was a bit more overgrown than before, and it was harder to move around on the poorly defined trails. Dix, meanwhile, was absolutely the same–a small collection of very modest summer cottages well offset from a well-kept circumnavigatory trail that respectful visitors are always welcome to enjoy. 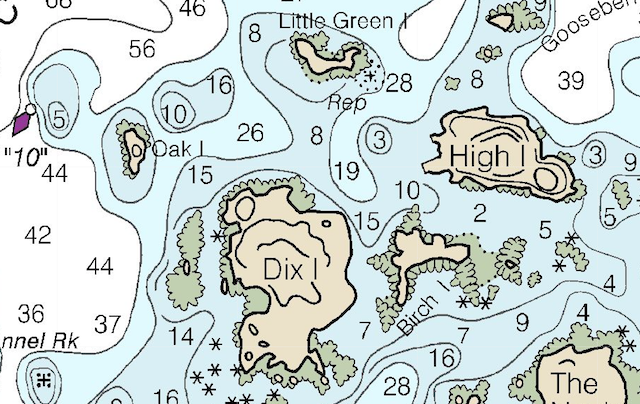 The anchorage is north of tiny Birch Island and south of the 3-foot shoal spot. A fantastic spot! 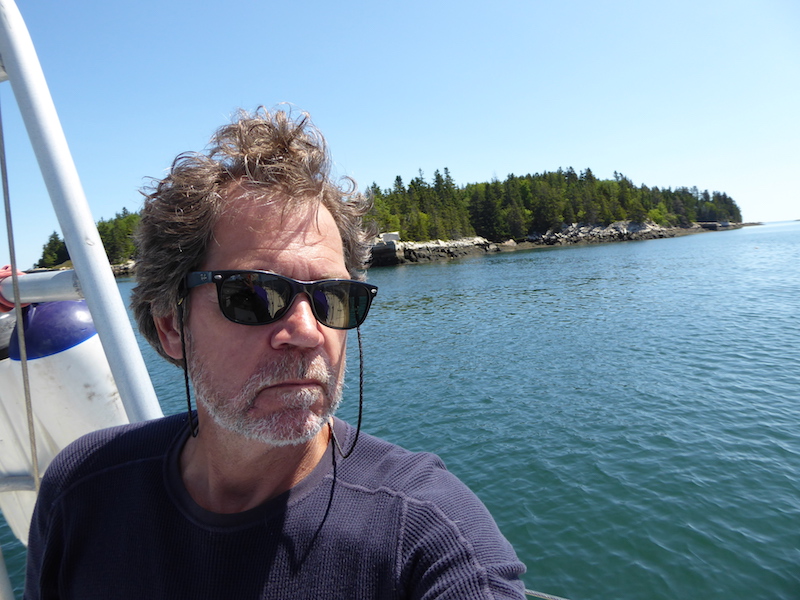 The obligatory selfie, with High Island in the background 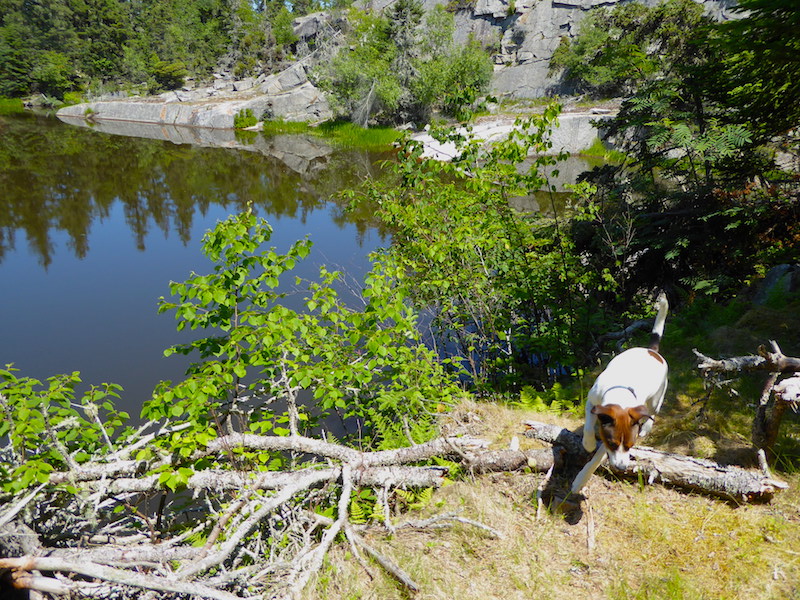 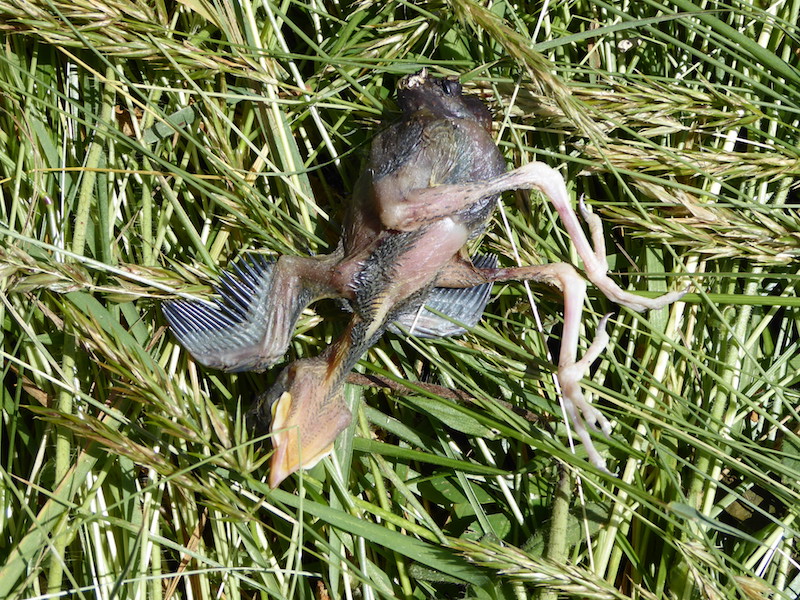 More dead babies! I found this innocent victim of who-knows-what on the Dix Island trail. Baxter, an oblivious canine, never noticed it

A weak sea-breeze did make up in the afternoon and we had the dregs of the flood tide current behind us, and so we managed to slowly drift up the rest of Muscle Ridge Channel without burning any fossil fuel. We arrived in Rockland at about 1630 hours and were soon joined by Ben, who brought aboard some chilled white wine to soothe my savage soul. Later, after Ben went away, we were joined by Clare, who had driven up by car from Portsmouth, and who both Baxter and I were very glad to see.

The three of us spent the weekend moored at Rockland and because we had a car were able to roam around a bit. We visited my old friend Loric Weymouth, who had two Jack Russell terriers for Baxter to frolic with, and also motored up the road to Camden, where we had lunch at the new Rhumbline Restaurant (highly recommended!) at the “new” Wayfarer Marine (now owned and operated by Lyman-Morse).

On Sunday afternoon Clare got back in the car and headed south again, taking Baxter (and his life-jacket) with her. So ended Phase Two of his Boat-Dog Education, and I was left to return to Portland on my own. Baxter did very well, I would say–an A-, if had to grade him, with points off for that cowardly leap overboard. If only I could get him to piss on that damn mat, I think we might have a fit and proper crewmember on our hands.

Some scenes from the voyage home: 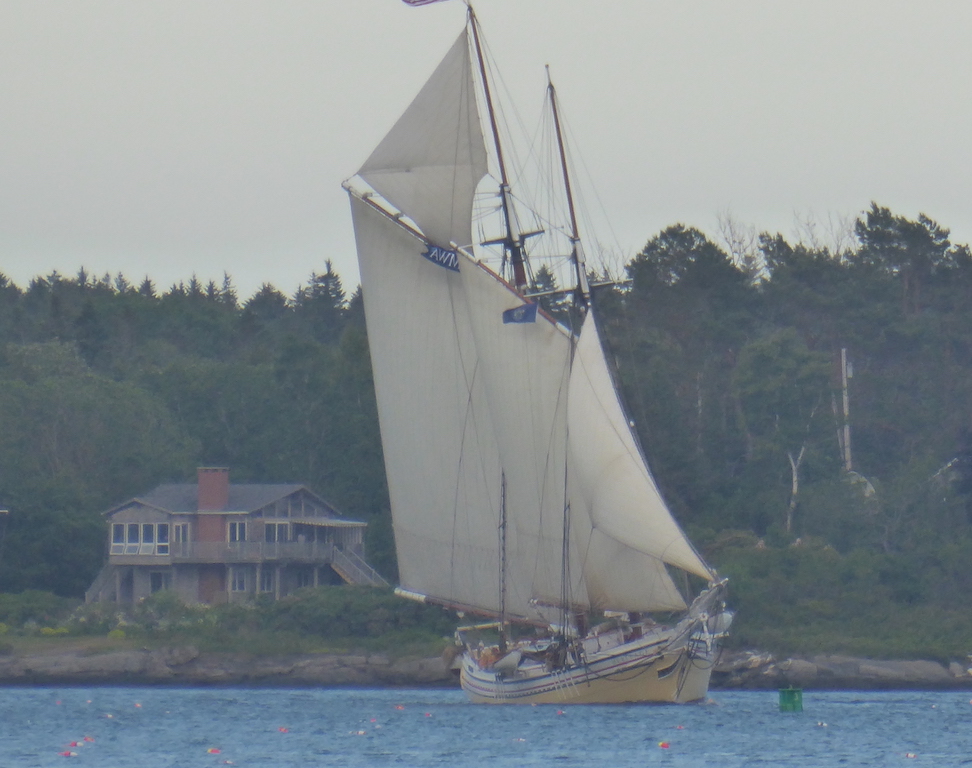 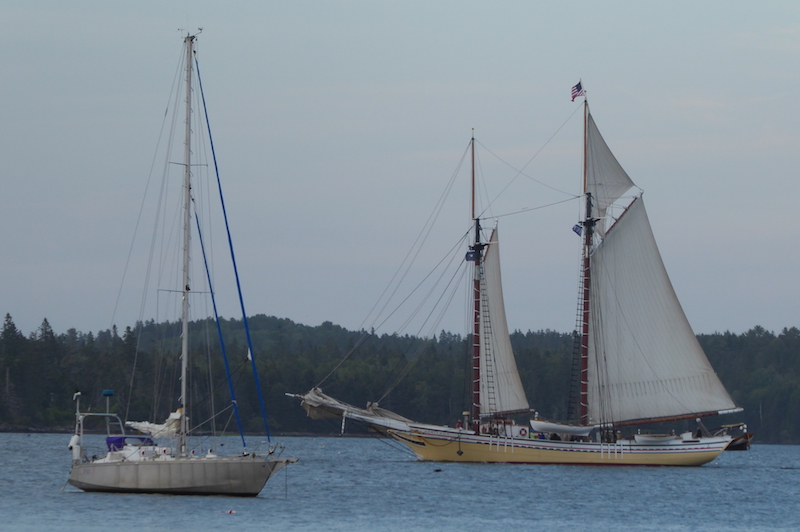 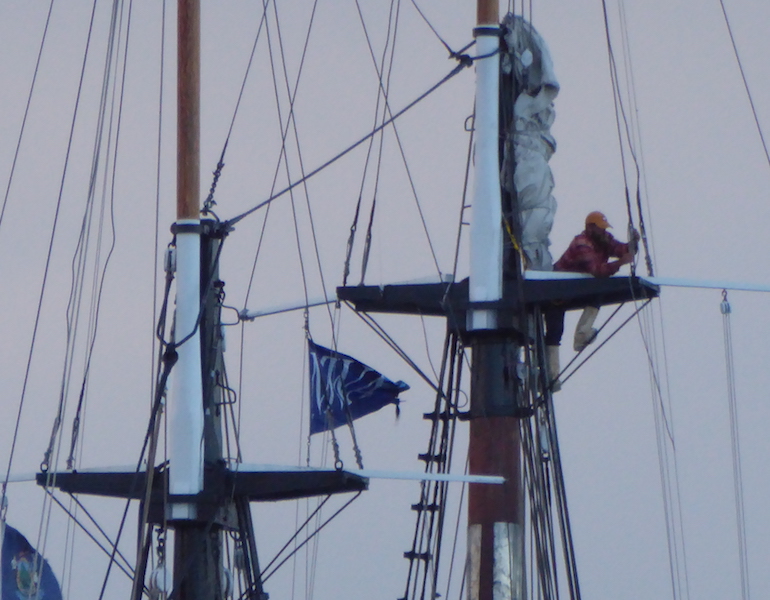 A crewmember in Heritage’s rig secures a topsail 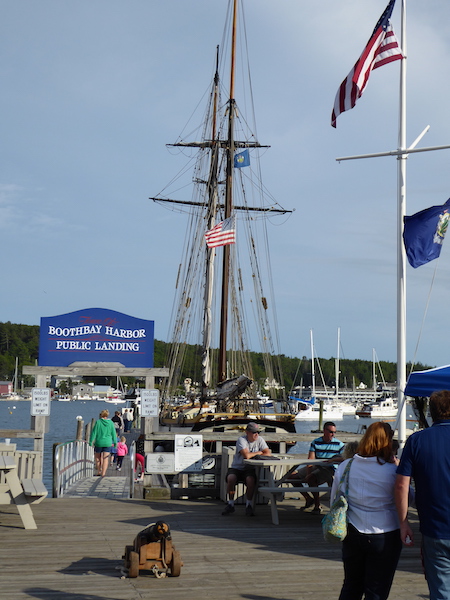 The privateer Lynx, a square topsail schooner, lies at the public dock in Boothbay Harbor. I saw Lynx launched at Rockport, Maine, way back in 2001 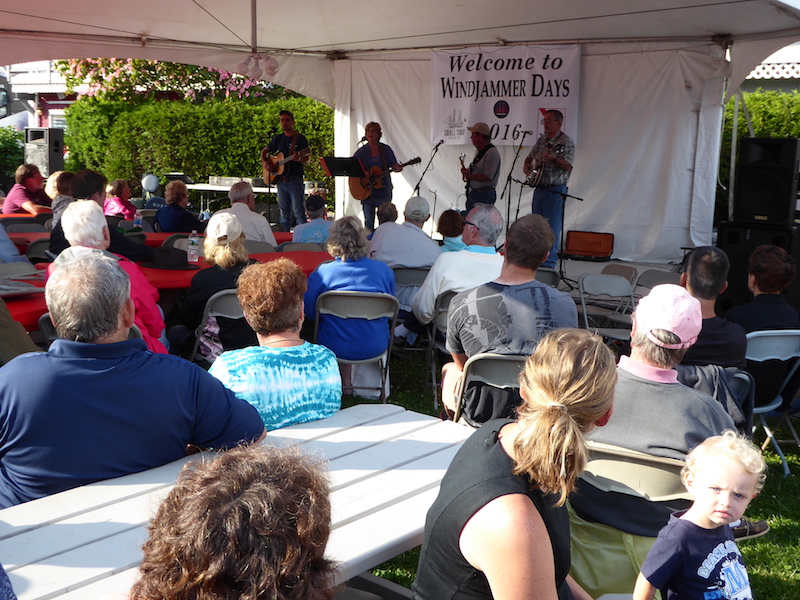 Some kind of fuss going on. Turned out the surfeit of tall ships in and around Boothbay was because of the Windjammer Days festival 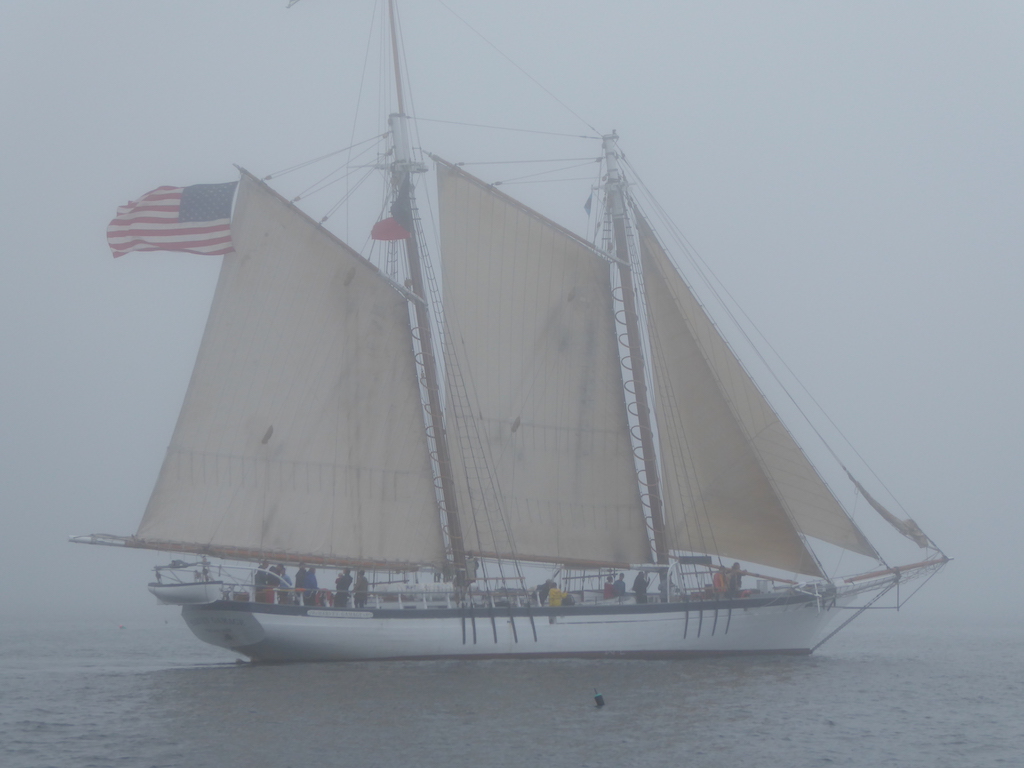 Passing by the schooner Harvey Gamage while leaving Boothbay in heavy fog. You’ll recall that this ungainly vessel assaulted mine some years ago 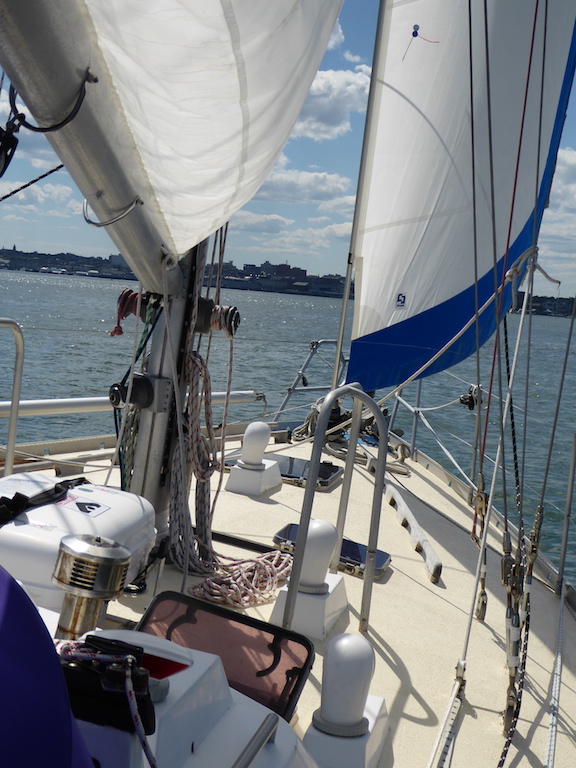 End of a fine trip. Lunacy sails back into Portland under a full main and staysail. This combination is proving to be very versatile! Easy for an old and lazy singlehander like me to handle in close quarters

0Shares
coastal cruisingdogs on boatsMaine coast
Previous PostSAILING ON FOILS: Will the Latest Racing Technology Divide Our Sport?Next PostTANKER MASHES UP SAILBOAT: Fun and Games in the Piscataqua River