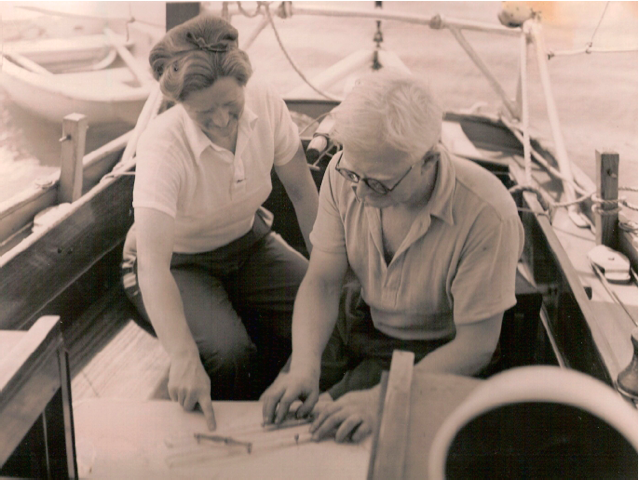 My good friend Paul Gelder, formerly editor-in-chief of Yachting Monthly in the U.K., one of my favorite print sailing comics, writes to remind me that interested parties have until the end of this work week to make nominations (these can be made by any member of the public, mind you) for the 2015 Yachtsman of the Year Award, presented by the U.K.-based Yachting Journalists Association. The award was first established in 1955 and the inaugural recipient was a cruiser, Eric Hiscock (see photo up top), in recognition of his three-year circumnavigation with his wife Susan aboard their 30-foot sloop, Wanderer III.

To give an idea of the company Eric has kept since then, here’s the complete list of winners over the years:

1965: Ian Proctor – selection of his Tempest design by IYRU

1979: Alain Catherineau – rescue of ‘Griffin’ crew in the Fastnet Race

1989: Tracy Edwards – achievement in skippering ‘Maiden’ with first all-women crew in Whitbread Round the World Race

1990: David Cowper – for his three-year singlehanded voyage through the North-west Passage in a converted lifeboat. Special Award to Major Peter Snowden for services to yachting on his retirement after 18 years as secretary to Cowes Combined Clubs

1991: Penny Way – for her remarkable achievements in windsurfing, including the World Championship

1994: Robin Knox-Johnston and Peter Blake for their record breaking, 74-day, non-stop round the world voyage in ‘Enza’ which captured the Jules Verne Trophy. Special Awards to George Johns, official photographer on board ‘Enza’, and Tim Severin, the celebrated marine adventurer

1995: The sailors of the RYA Youth Team who won the 1995 IYRU Nautica World Youth Championship. Special Award to Jim Saltonstall, RYA National Racing Coach who was the team coach and manager

1997: Pete Goss – for outstanding seamanship in the Indian Ocean during the 1996/97 Vendee Globe, singlehanded round-the-world race, when he sailed back 160 miles into 60 knot head winds and rescued his fellow competitor, Raphael Dinelli

1998: Ellen MacArthur – for her exceptional performance in the 1998 Route du Rhum Race. At 22 years old she was the youngest ever winner of the trophy

1999: Ben Ainslie for his exceptional performance in the Laser class

2001: Ellen MacArthur – for her record setting performance in the Vendee Globe solo round the world race

2002: Ben Ainslie – for winning the World, Pre-Olympic and European championships in the Finn Class

2005: Dame Ellen MacArthur – for smashing the record to be the fastest, non-stop, solo sailor round the world

2006: Dee Caffari – the first woman to sail solo round the world against prevailing winds and tides

2007: Sir Robin Knox-Johnston for completing the Velux5Oceans solo round the world race at age 68

2011: Nick Craig – dinghy sailor who won the highly competitive OK World Championship in 2011 and in doing so also became the only person ever to hold the World, UK National and Inland championship titles. He also won the RS400 National championship. To conclude an outstanding year, Nick went on to secure an overall win of the extremely challenging Endeavour Championship for the 5th time

The list, you will note, is very heavily biased towards Brits, but we can solve that problem by getting more people from outside the U.K. participating in the nomination process. Which is why I believe Paul, recently elected chairman of the YJA, is pestering me about this in the first place. 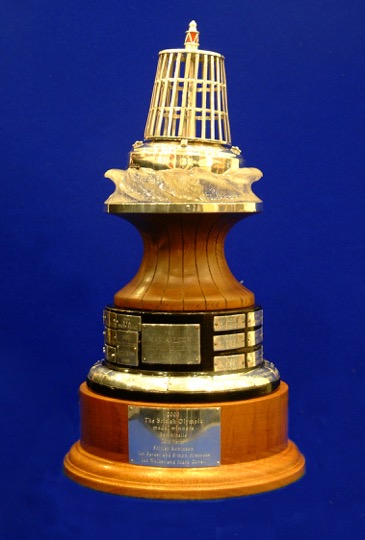 The vaunted piece of tin at stake here

Me personally, my top choices for sailing achievements in the past year or so would be Loick Peyron (French, of course) for hopping onboard Banque Populaire on short notice and finally winning the Route du Rhum last year. Also Lloyd Thornburg (an American, yay!) for being the first person to do something really interesting on a MOD 70 trimaran. He sure has been tearing through the record books on Phaedo3!

As for cruising candidates, I’m thinking of Webb Chiles (another American!), for his ongoing solo circumnavigation aboard Gannet, a tiny Moore 24, as well as for all the other intense sailing he’s done over the years, including completing much of a circumnavigation on an open 18-foot Drascombe Lugger back in the 1970s.

What are your ideas???