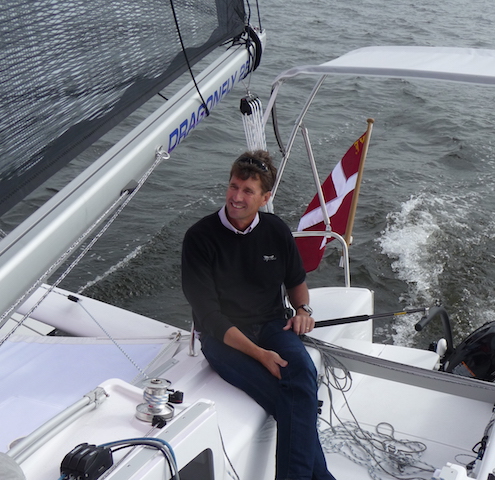 Pardon me a moment while I step into the Not So Wayback Machine and dial into the middle of last month, post boat show in Annapolis, when I was doing my routine round sampling new boats under sail. Subject number one this year was the new Dragonfly 25 trimaran, which I sailed with Jens Quorning (see photo up top) of Quorning Boats in a typically light 6-10 knot breeze on Chesapeake Bay.

You think of course a trimaran should be fast, but speed is a relative concept. It seems bottom line on this little hot rod is that in light-to-very-moderate conditions like we had you’ll usually be sailing at wind speed, which is pretty damn good for a boat just 25 feet long. Problem is it doesn’t seem so fast when you know the boat is capable of so much more. In this case, Jens informs me the top speed they’ve seen on this little 25 is a skosh over 20 knots in very strong conditions. Fifteen knots is common in moderate-to-strong wind.

In our particular case we made an easy 6-8 knots under a screecher on a close reach, about 4-5 knots closehauled flying a working jib, and our best speeds were between 8-9 knots beam-reaching under an A-sail. All of which was accomplished very comfortably without any undue effort or strain. 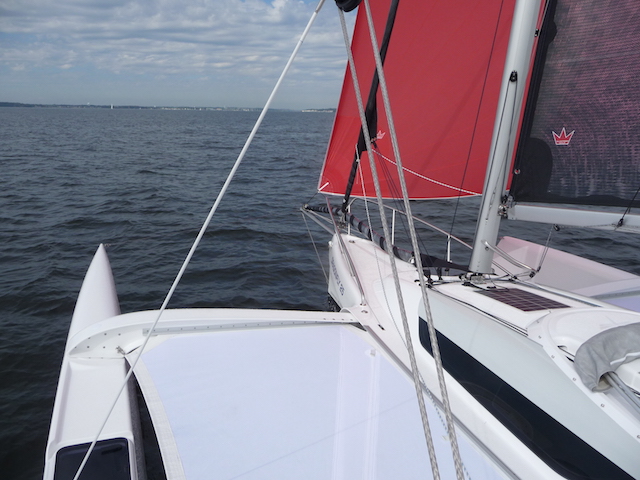 A-sail up and pulling from the optional bowsprit. Never will peeling off 9 knots in a 25-foot boat seem like such a sedate experience. One thing I noticed is that this light unballasted boat is a bit susceptible to sea state. Doesn’t take much chop to get her hobby-horsing in light conditions 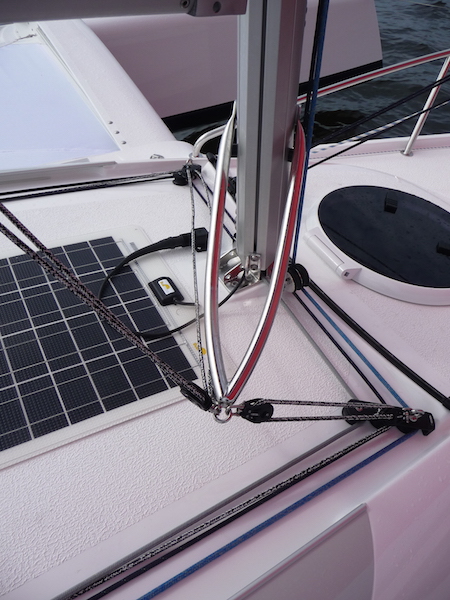 The rotating mast is stepped on a simple pin. I was surprised to learn that Quorning, a Danish firm, builds all their own rigs. They do everything they can in-house. A taller carbon rig (not built by Quorning) is also available 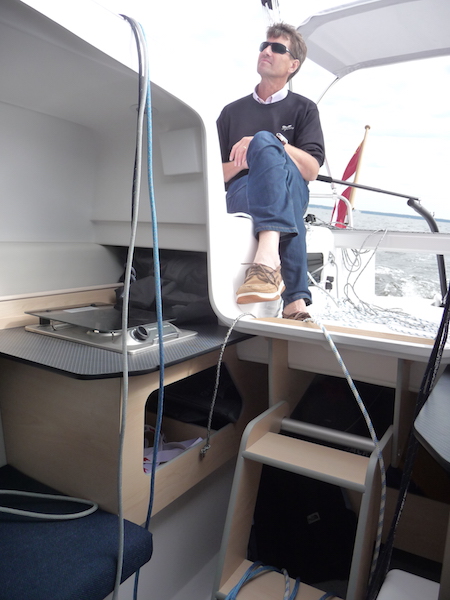 Inside looking out. The interior is simple but well conceived. The furniture module you see for the galley there, plus another on the opposite side of the companionway, can be quickly removed for racing. The centerboard is offset, so it fits under one of the saloon settees rather than eating up the middle of the boat. The saloon table can be pulled out and set up in the cockpit for al fresco dining. A big cockpit tent also makes it possible to considerably expand the sheltered living space when the boat is idle 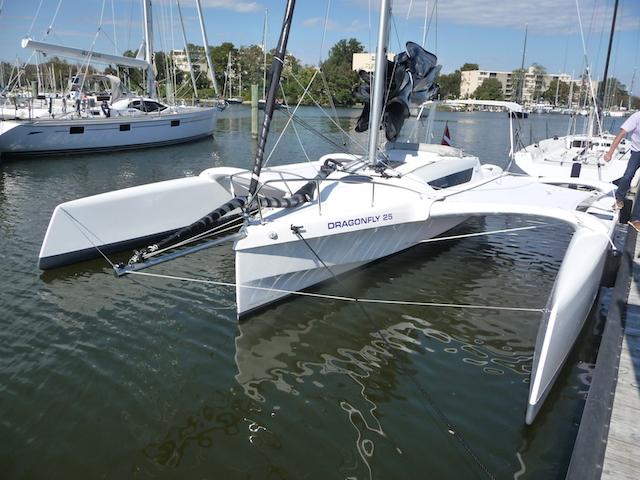 At rest with ama wings extended. Note how the amas, with their reverse bows, are actually longer than the main hull. Note too the big eyebrow on the deck joint forward and the pronounced bow chine, both of which help slap down spray when the boat is sailing fast 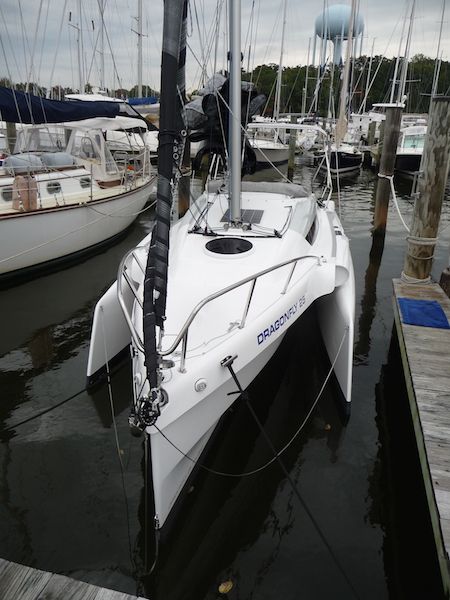 Wings folded. The folding and unfolding is accomplished with simple continuous-line controls and can be done while the boat is moving (at slow speed). As they fold out the amas are raised up slightly, so that the center of buoyancy shifts to the main hull to increase the boat’s speed potential. As they fold in the amas cant down slightly and become integral to buoyancy so as to increase stability when maneuvering at close quarters. The boat can be trailered behind a mid-size car and can be launched and rigged in 30 minutes by two experienced crew

Moving on from the little Dragonfly to Oyster’s new 475, a luxurious center-cockpit monohull cruiser, was a big gear change for sure. For Oyster, though, which is now building boats that nearly qualify as super-yachts, this 47-footer is really just a starter boat. 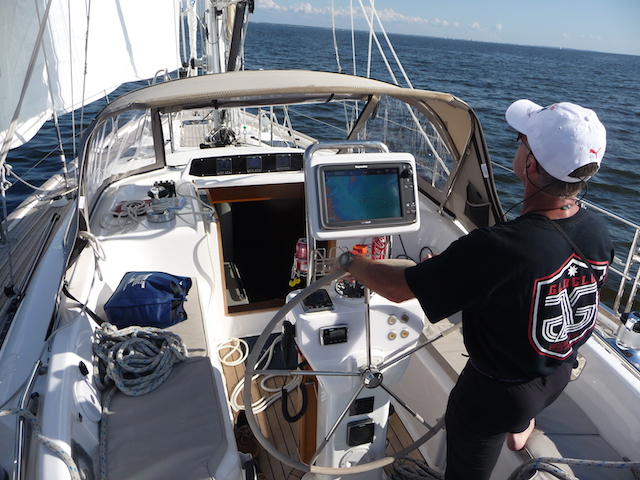 Realistically, this is just about as small as you want to go on a center-cockpit boat. The cockpit is a bit compact, but still comfortable 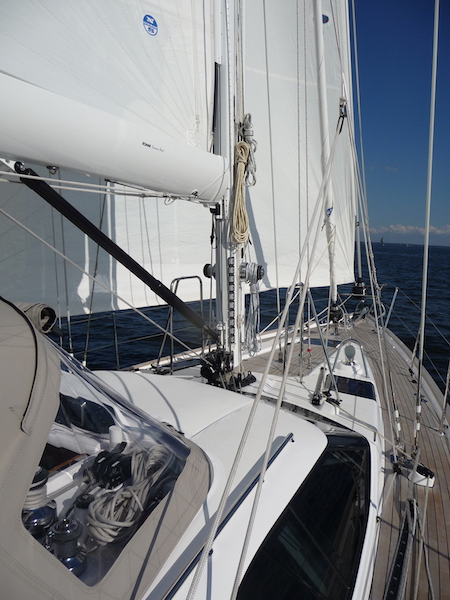 The teak be-spangled foredeck. Our test boat, hull no. 2, had a cutter rig with a big overlapping genoa sheeted to proper tracks on the sidedecks, a traditional but not-so-common arrangement on new boats these days. We did not fly the staysail during our test. Our boat also carried a Romar Leisure Furl in-boom mainsail furling system, as opposed to the in-mast systems normally found on such boats. Under full main and genoa our best speed was 5.9 knots in 8-10 knots of true wind at a 50-degree apparent wind angle. The boat was also reasonably closewinded, making 5.8 knots max at a 35-degree angle 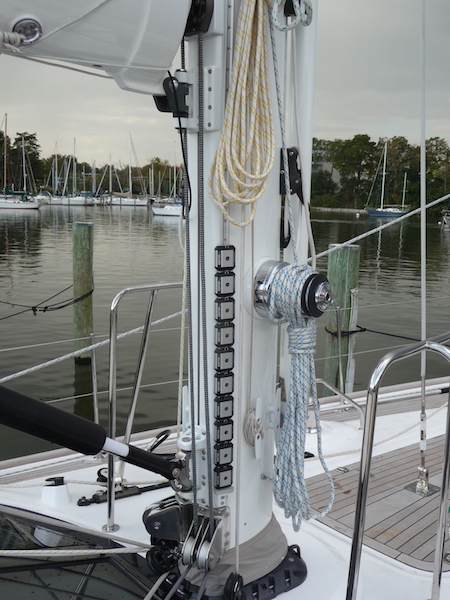 You don’t see dedicated trysail tracks much anymore, but on a boat with a furling mainsail, be it in-mast or in-boom, it’s really not such a bad idea. This way if your furler packs up and betrays you when the sh*t hits the fan you still have options 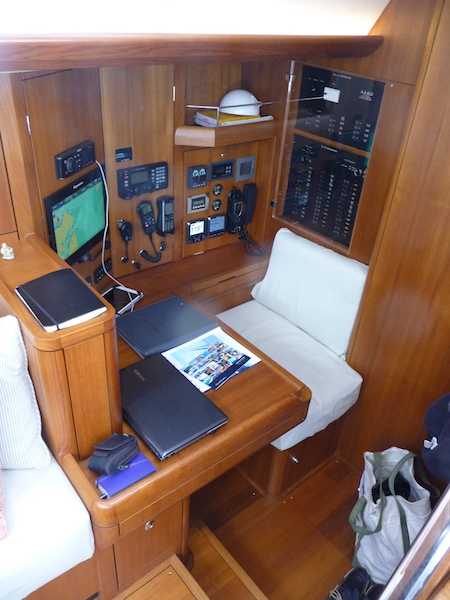 A real nav station! Another increasingly rare commodity on new boats. Note all the nice solid wood in the joinery 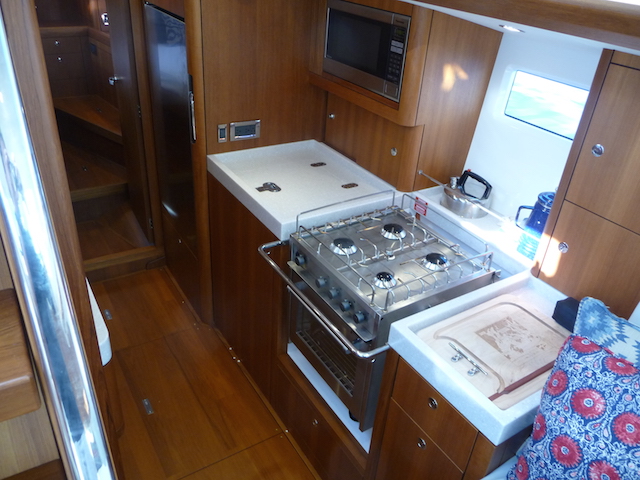 Great galley space too in the walkway to the aft cabin. Note that huge front-loading fridge all the way to the left 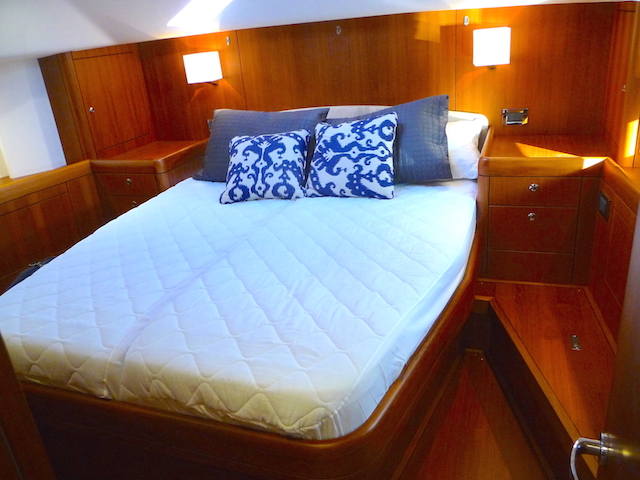 This of course is the whole raison d’être of a center-cockpit lay-out: the fantastic owner’s berth in the huge aft stateroom. My camera, alas, didn’t have a wide enough lens to capture the true glory of this space, but it is plenty sumptuous, with lots of useful storage spaces

Look for full reviews of both these boats in upcoming issues of SAIL Magazine!