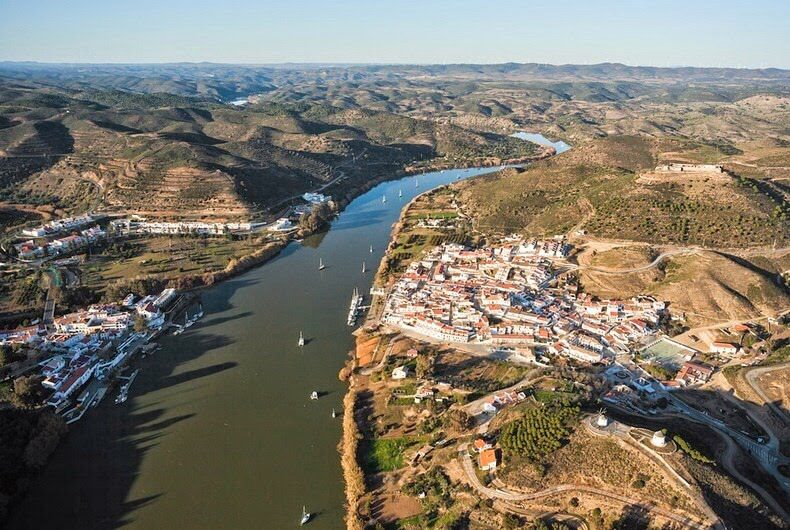 I was sitting in the cockpit of Crazy Horse, my old Alberg 35 yawl, toes contracted in the thin film of cold dew that clung to the boat, cup of hot coffee in hand, watching the sun struggle to emerge from behind the distant hills and fill the river with light. Instinctively, I groped for my watch, a habit remembered from my life ashore, and wondered: what time could it be now? And at once I was struck by the absurdity of the question.

It said something of the nature of cruising under sail, I realized, that it was only the previous day, after having spent nearly a week on the river, that we finally discovered that the clocks on the west bank (in Portugal) were an hour behind those on the east bank (in Spain). It was appropriate, too, that we had learned this from a village drunk, although now I understood it didn’t really matter much. Time in its conventional sense had little meaning aboard a boat afloat on a river like this, except as it pertained to the tide, and one hardly needed a clock to keep track of what it was up to. A glance at the riverbank and at the silky brown water flowing past our anchor rode was all the data required to gauge its progress.

Ironically, I remembered that time had seemed very important when we first entered the river. We had first heard of it by word of mouth, its name popping up repeatedly in conversations with other cruisers we met while wandering Spain’s Costa del Sol.

“Oh, but you must go to the Guadiana!” they all exclaimed.

And so, inevitably, we went.

But when navigating by word of mouth, it is best to take nothing for granted. On studying some borrowed references, I had learned that the river stretches some 450 miles into the great Iberian peninsula and that its lower reaches for centuries had served as the border between Spanish Andalusia and the Algarve on Portugal’s south coast. The first 23 miles, up to the Portuguese town of Pomarão, were said to be navigable, but one had to take this a bit on faith, as there were no charts available of the river itself. Tidal currents were said to run as hard as 2 knots on the ebb, which seemed a little daunting, but manageable.

There was a chart of the entrance, which I had copied from a Danish cruiser’s collection in Gibraltar. It showed just three feet of water over the bar at low water, so I knew it would be critical to come in on a rising tide close to high water. With some effort I also managed to acquire a photocopy of the one relevant page from the relevant tide table, but could not tell from the cryptic declaration at the top of the page–MINUS 1:00 HR–whether it referred to Greenwich Mean or local time. 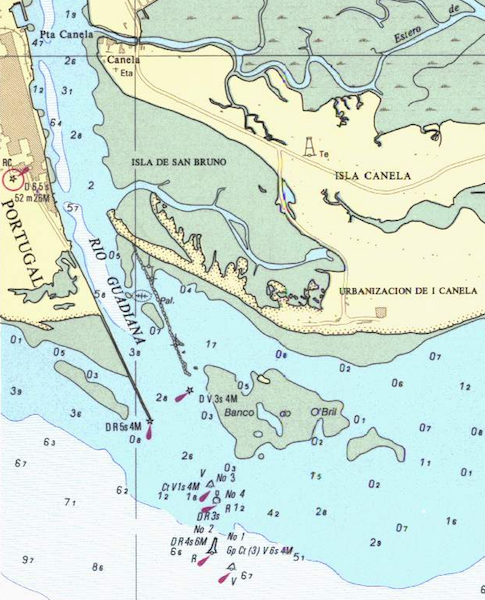 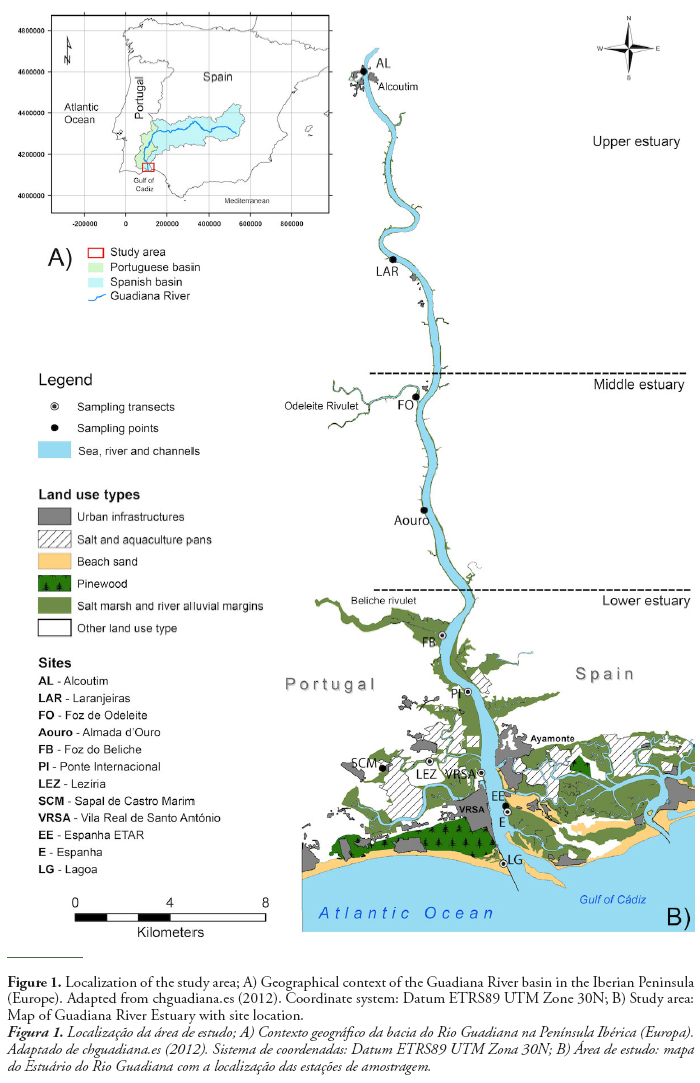 The river from the entrance to Alcoutim

So it was with great trepidation that we had approached the river entrance one sunny morning a week earlier. Testicles shriveling, eyes glued to the depthsounder, I was immensely relieved when it became apparent the river mouth had recently been dredged.

As soon as we were inside I killed the engine, rolled out the jib, and lost myself in the champagne sensation of sailing a river, watching the land slip silently past on either side. First to the left the low sprawl of the Portuguese town of Vila Real de Santo António, where an abandoned brigantine lay leaning against the quay with gossamer fragments of sail hanging from its yardarms. Then to the right the Spanish town of Ayamonte, resplendent in a honky-tonk veneer of tourist-trap restaurants and gift stores.

We were halfway past Ayamonte when two men in a skiff suddenly appeared behind us waving documents.

“Who are you?” shouted Carie, my intrepid crew and companion.

“Portuguese!” they shouted, pointing to the left bank. “Guarda Fiscal.”

We pointed to our Spanish courtesy flag and insisted we were in Spanish waters.

Reluctantly, I rounded the boat into the wind, furled the jib, and allowed them to come alongside. They handed over a clipboard with a blank entry form on it. Once we filled this out and handed it back, they beamed like children on Christmas morning. The Portuguese do so love their paperwork!

“Welcome to the river!” they waved as they turned and sped back toward shore.

Formalities having thus been dispensed with, we unrolled our jib and continued on our way through the looking-glass.

THIS NOW SEEMED as though it might have been a century ago, and since that distant moment we had drifted up and down the river at our leisure, like so much flotsam on the tide. We had anchored beneath tiny hamlets utterly devoid of commerce, with nary a store, nor a bar, nor a vending machine to their name. We had listened in the evening to the nightingales in the willows on the riverbank, heard the splash of fish leaping, and watched chevrons of storks and herons flying past overhead. 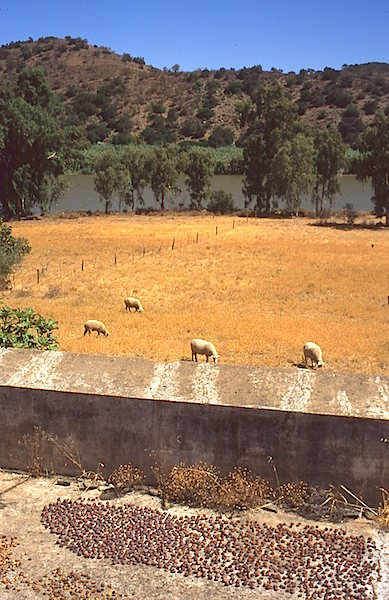 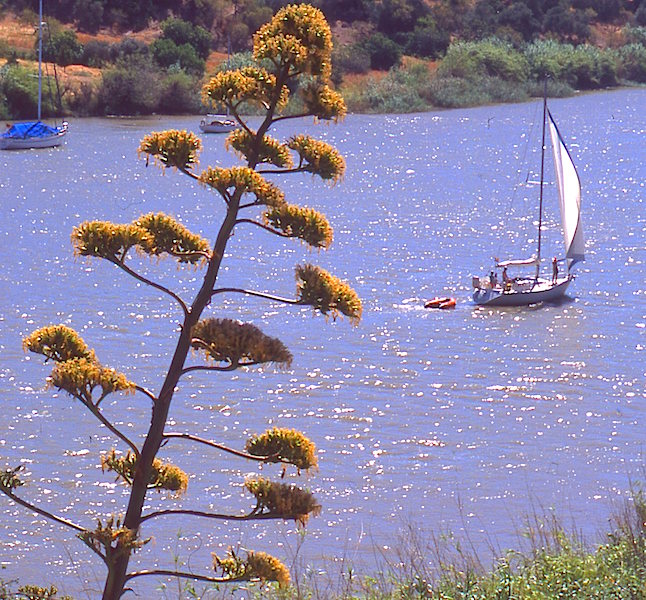 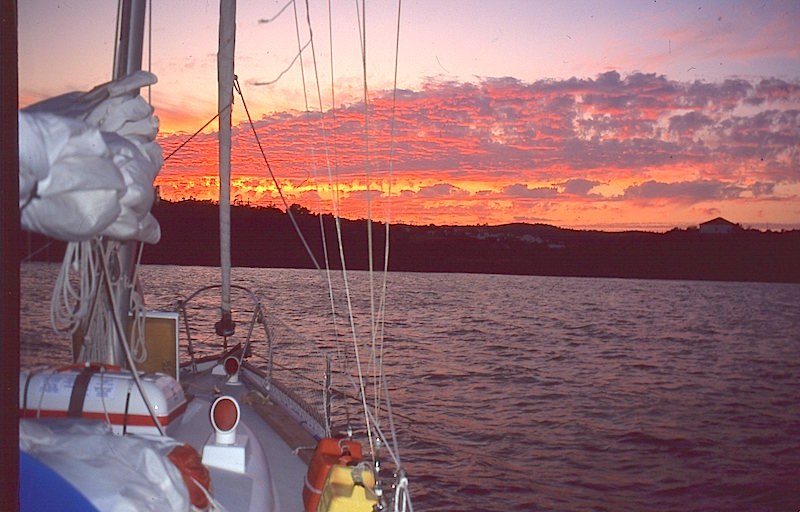 Sunset on the river, as seen from our deck 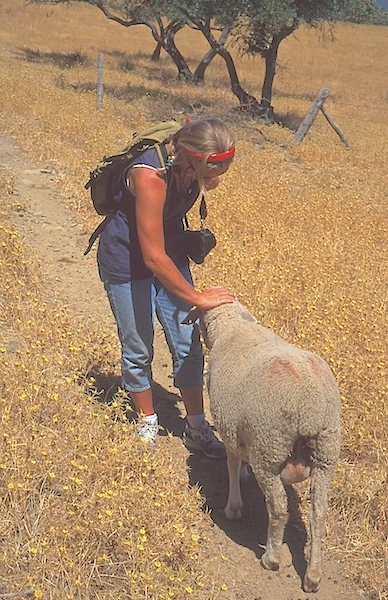 We had spent afternoons wandering the dry brown hills, clambering up to the ruins of Moorish castles, watching goatherds and their flocks wend their way down twisted trails. We had gunkholed in the dinghy up myriad creeks and estuaries past stands of reed and bamboo, watching turtles bask in the sun and pipers skitter across mudbanks. And in the heat of the day we had bathed in the river, keeping an eye out for the enormous pale jellyfish that pumped aimlessly through the water.

And it seemed now as if life might go on forever this way.

THE PREVIOUS DAY, I remembered, after we learned of the discrepant clocks on either side of us, we had experienced events, those blisters of action that, temporarily at least, make time seem meaningful. We had waited for the turn of the tide in the afternoon, which came an hour after I expected it (a live demonstration, if you will, of how useless clocks could be), and when finally it arrived we prepared to weigh anchor and sail downriver.

The anchor, however, refused to come aboard. After a great effort we at last hauled it close enough to the water’s surface to see it was much entangled in a great gnarled web of rope–evidently some sort of fishing rig.

One hates to destroy another man’s means of sustenance, but in this case there seemed little choice. The rig, in any event, did not appear at all functional, and I guessed it had been lost to its owner for some time. A knife, then, seemed to be the answer. There was a considerable length of loose line–cheap polypropylene, though dear enough to any fisherman living on this river–that I cut free and salvaged, about 100 feet of it. Then I sawed feverishly at the heavier line all twisted about the anchor’s throat, and in a moment we were free.

The sail downriver was splendid. Again, the sensation of a magic carpet ride, as though we were not traveling through the water, but some fraction of an inch over it. All we saw around us passed as though in a dream, and even while lost in the details of the helm, navigation, and sailhandling, this quality of perceiving the river as a vision was not lost.

Conditions were relatively mild, but quite variable, as is to be expected in a narrow river with high land on either side. The wind danced back and forth across our stern, gusting and subsiding at random intervals. Speed was not important; we let the tide take care of that. We needed only to control the boat and so rolled out a fraction of the jib, well short of the shrouds, so that we might jibe back and forth effortlessly.

It took just an hour to reach the village of Alcoutim, though it may have been minutes, or a day, or a lifetime. To perceive time as a quantity, I now realized, is a fatal disease. It is its quality we should be concerned with. Given our lives are finite, what else could possibly matter?

We dropped our anchor under sail. Ran down into a gap between two groups of boats, rounded up, rolled up the jib, let the tide and wind stop the boat, dropped the hook, paid out rode, snubbed it, and–click–the anchor dug in like a pawl on a winch. We had not torn the fabric of the moment with our engine, and the river rolled on by.

I had left the line I cut free from the anchor in a tangled pile in the dinghy and now set to sorting it out, poking at the stone-hard knots with my marlinspike. A thin sentiment of remorse passed through me as I considered how important this line must have been to the man who tied these knots, but a mariner’s ruthlessness prevailed. Finder’s keepers, after all. And in the same instant, as I reconciled myself to the fact that this would now be my line, I heard a yelp of dismay from on deck. 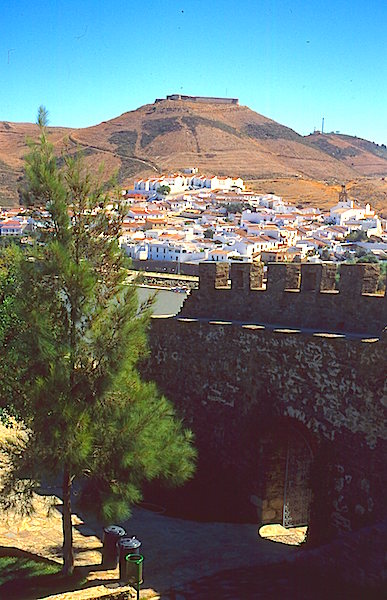 In the Portuguese town of Alcoutim, looking across to Sanlucar de Guadiana in Spain 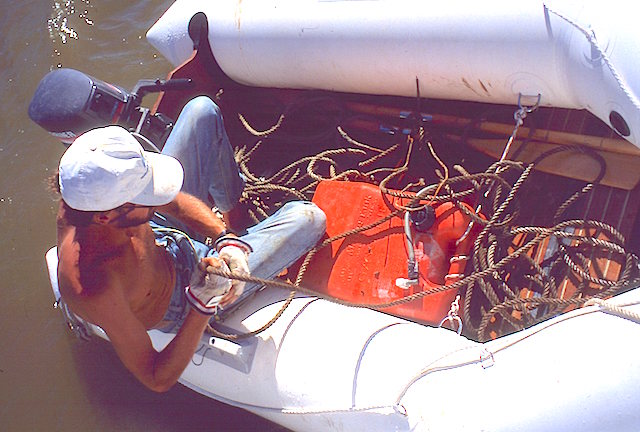 Grappling with my new line

Carie had dropped a bucket overboard and was pointing at it, cursing herself as it rushed downriver on the tide. I was already in the dinghy, but was reluctant to chase the bucket with oars, as it would be a difficult, perhaps impossible task to row the little inflatable boat back to its mothership against both wind and tide.

“Quick! The outboard!” I called.

Carie was still cursing as she handed it down. “It’s my best bucket!” she complained.

Whereupon the bucket promptly disappeared from view. I looked down then at all the line still heaped in confusion on the dinghy’s floor.

I drained the last of my coffee from my cup and could now see the light creeping across the water towards me. I leaned into the companionway and this time succeeded in finding my watch. It was seven a.m. in Spain, six in Portugal–take your pick. In the distance I heard a donkey trying to sing, truly a gruesome sound. A rooster crowed. A halyard slapped the mast.

Editor’s note: I cruised the Rio Guadiana with Carie van der Krüys during the summer of 1996. An earlier version of this story first appeared in the July 1997 issue of SAIL Magazine. To read more about my days cruising on Crazy Horse, check out the following links: