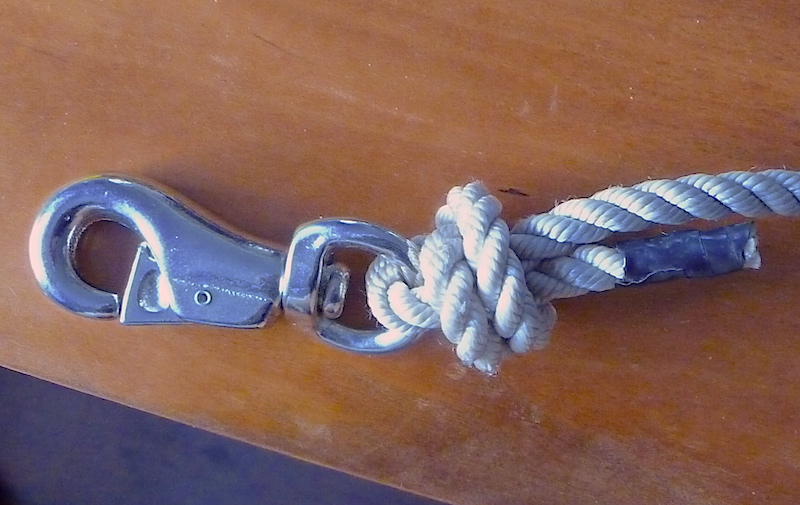 That’s right, sports fans: it’s awards season! In the always hard-fought Cordage Utility category the ballots have been counted and the surprise winner this year is the mysterious halyard knot. Unknown to many sailors, the halyard knot is nonetheless an elegant compact knot that is particularly handy to know about if you need to bend a line on to some sort of shackle or clip (a halyard shackle being the eponymous example) on a more-or-less permanent basis, but are too lazy (or ignorant) to be bothered with actually splicing the line on to said bit of hardware.

The knot most people use in these situations is, of course, the perennial and ubiquitous bowline, which is not quite ideal in this application, as it is bulkier than it needs to be (a drawback, for instance, when you have to hoist a halyard shackle up close to masthead sheave) and involves a fixed bight or loop of line that necessarily must be larger than necessary.

The halyard knot is very secure and is very unlikely to come undone after it has been loaded up. Unlike a bowline, however, it is not that easy to untie once it has been in service for a while. In the end, when you want to get your shackle back, you may have to cut it off. At a minimum you’ll need a nice marlinspike to pick it apart.

In bestowing this year’s award, Horatio P. Nimblefingers, head knot judge, stated: “Though it is always preferable to splice a halyard to its shackle, particularly when using high-modulus line, the sad fact is many so-called experienced sailors don’t know how to splice multi-braid rope. And those that do know may sometimes find themselves in situations where splicing a line to shackle is not practical or feasible. In those instances where a knot is, or must, be used, our judging panel agreed unanimously that the halyard knot is by far the most qualified candidate. It is attractive, easily executed, and easy to remember. In short, it is everything we like to see in knot.”

The halyard knot, renowned for its shy, retiring habits and character, declined to appear at the awards ceremony and afterwards could not be reached for comment. Accepting the award in its place was the more flamboyant hangman’s knot, which declared: “That’s my buddy Hal! He’s a real winner, but he hates to admit it. What he is at heart is a utilitarian minimalist.””