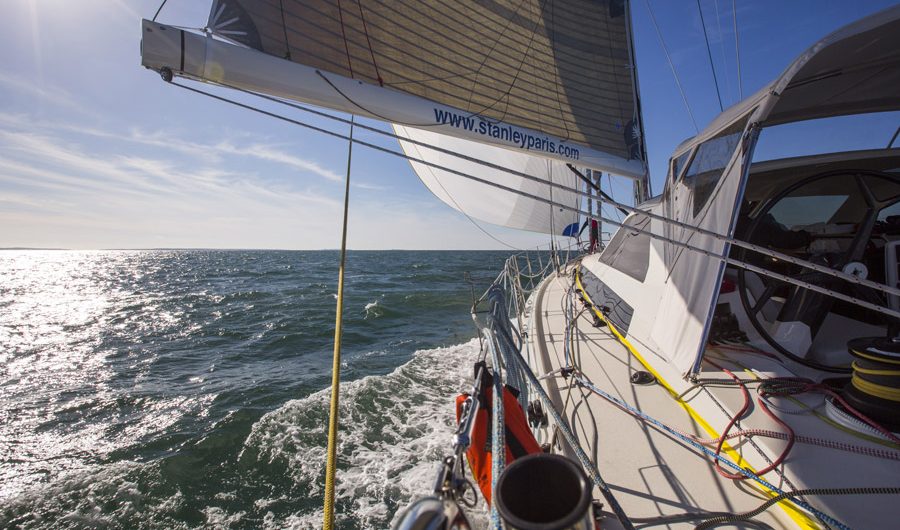 Thank goodness I was off having my own misadventure when Stanley Paris announced in his blog that he was abandoning his solo circumnavigation attempt and pulling into Cape Town. Otherwise there’s a good chance I might have stepped in it like my SAILfeed compatriot Andy Schell did when he read the news. It seems that what set Andy off was a single phrase in Paris’s announcement: “that the design of the rigging attachments to the yacht were inadequate for ocean sailing.” My reaction when I read that was pretty much WTF too.

Andy made some critical assumptions and statements based on that statement and promptly got slapped down by Patrick Shaughnessy at Farr Yacht Design, the firm that designed Paris’s boat, Kiwi Spirit. The implication in Shaughnessy’s response, as published by Andy, is that the phrase in question refers not to the original design of the “rigging attachments,” but to the design of some jury rigs created by Paris.

One big problem in trying to figure out exactly what happened on Kiwi Spirit is that Stanley Paris is not very good at blogging. From his blog we can learn little or nothing about the rigging failures he experienced and how he tried to make repairs. On his Kiwi Spirit Facebook page I did find one post put up by his shore team, on January 9, with photos they’d received of damage to Kiwi Spirit‘s staysail furling rod and the staysail stay’s deck attachment. 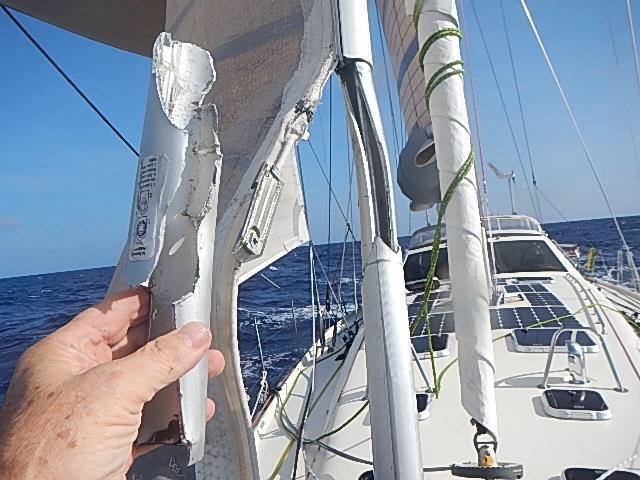 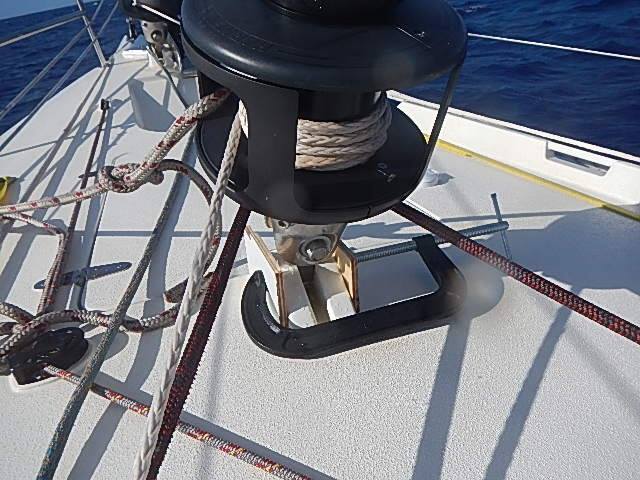 According to an e-mail that Paris sent Andy, this damage was caused after “a spinnaker halyard wrapped around the top of the furler at the head and the furling torque caused the separation.” According to Shaughnessy’s e-mail, the C-clamp jury-rig seen in the lower photo was necessary because the “retaining nut” for the pin securing the bottom end of the stay had been lost.

We know also from Andy’s correspondence with involved parties, and from a Florida News4Jax TV report posted on the Kiwi Spirit Facebook page, that Kiwi Spirit‘s main boom suffered major damage during an uncontrolled crash jibe. In his e-mail to Andy, Paris says the boom itself was cracked and that the “boom end pulleys” (the sheaves, presumably) for the preventer, first reef clew line, and outhaul were also damaged. He concedes he had no preventer rigged at the time, but notes he doesn’t think it would have made a difference if he had. In the News4Jax report, Paris also states that “the block that holds [the boom] to the boat” (a sheet block presumably) was broken and cracked. Shaughnessy references damage that sounds somewhat similar to this in his e-mail to Andy and further mentions that the mainsail suffered some broken battens, that these battens had been replaced with fishing rods, and there was concern going forward that the boom damage would lead to still more battens breaking.

Evidently, Paris sent photos of all relevant damage to interested parties on shore for appraisal, but so far no photos, save for those two above, have been shared publicly. (I note now that the original January 9 post containing the two staysail photos is no longer on the Kiwi Spirit Facebook timeline, though the pix themselves are still accessible.)

According to the News4Jax report, Paris fell while trying to repair the boom damage and cracked two ribs, but this may be inaccurate. (I know from my own recent experience that TV reporters aren’t always very careful with their facts when covering yachting mishaps.) According to a blog post by Paris dated January 4, what sounds like this injury occurred on January 1, as Paris was recovering “a light headwind sail” that had blown out during the night. He states that he had been scared during the night as the wind increased, and that he’d had to handsteer the boat as the sail was overpowered. After the sail tore, he says he could not take it down in the darkness, but could only watch it “self destruct” until dawn came.

It is interesting to note that Paris makes no mention of this event or of his injury in his January 2 blog post, which is a perfectly boring anodyne account of passing a ship at night. 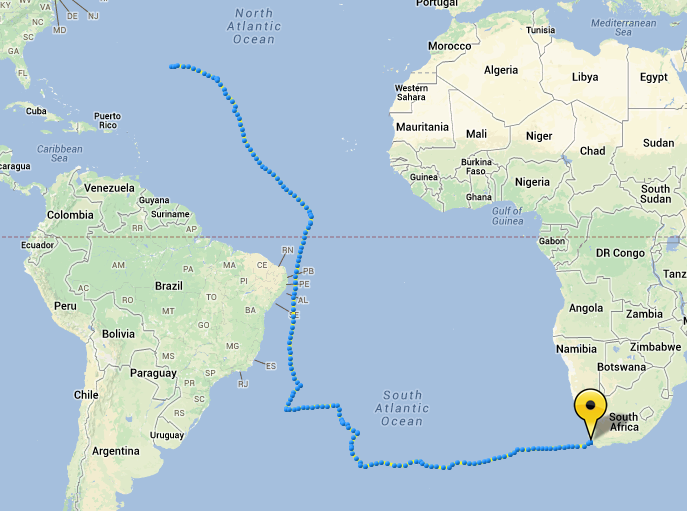 It is also interesting to note that even as I am drafting this post, Paris, who is now back in the U.S. (he’s letting a delivery crew bring Kiwi Spirit back from Cape Town as far as the West Indies), has just made another post on his blog stating that he will now “have extensive meetings with the sail maker, designer, builder and others to determine the best course of action that will restore my confidence in the boat and its fittings.” Which implies to me that his problems with the boat may have involved more than just a couple of isolated rigging failures.

When I last blogged about Paris, my operating assumption was that all the money and expertise he had available to throw at this project pretty much guaranteed its success, barring something unforeseen happening. I mean, hell, according to the story I read in the February 2013 issue of Cruising World, Paris was going to carry “a second carbon-fiber rig that will be stowed below in several sections in the event that the first fixed one fails.”

This denotes an extremely high level of preparedness. And now we’re supposed to believe that he had to stop because of a crash jibe, a halyard wrap, a lost retaining nut, a broken block, and some busted battens? 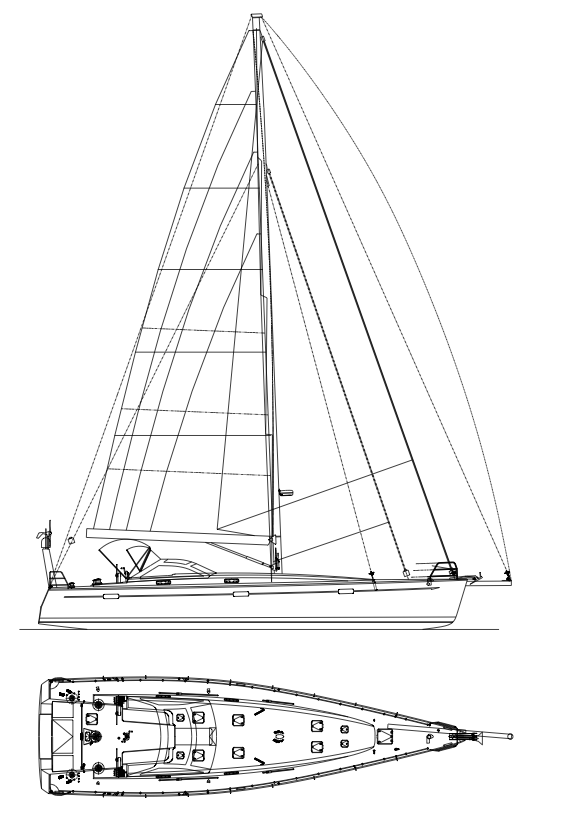 I’m guessing there may be more to this story than has been shared so far.

Here are a few of the questions that come to my mind:

-Were there no spare battens, retaining nuts, or boom sheaves on board? If so, why was it not possible to use them?

-I’ve noticed that Kiwi Spirit when she set out from St. Augustine had fixed furlers for her jib and staysail and a removable continuous-line furler for her inner staysail.

Earlier in her brief career she had continuous-line furlers on all her headsails. 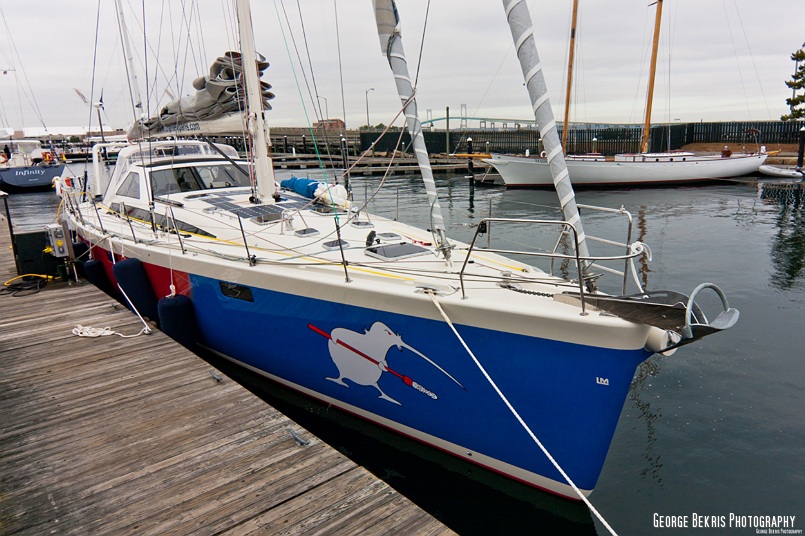 Why was this change made? Were the sails on continuous-line furlers being carried as spares?

-When did the damage to the staysail furler and stay attachment occur? Was this related to the “light headwind sail” incident on January 1?

-Exactly what “light headwind sail” was it that blew out on January 1? Wasn’t it on a furler? Why couldn’t Paris simply roll up the sail before it was damaged?

-Was there really a whole spare rig onboard? Did that include a spare boom?

-Why was there no preventer on the boom when the boat jibed?

-Is the jibe that caused the boom damage the same as the one described in Paris’s December 26 blog post? This involved what sounds like a serious injury.

-How many times was Paris injured? Was he more badly injured than he has let on?

-Were there other problems with the boat that we haven’t been told about?

Some larger questions I have include:

-Is Paris having second thoughts about his “green voyage” goal? The whole notion of burning hydrocarbons up the wazoo to build a super-sophisticated boat, then pledging to burn none at all on a voyage around the world–while relying on gear like electronic autopilots, microwave ovens, and electric stoves–seemed a bit disingenuous in the first place. Judging from Paris’s blog posts, the green goal turned out to be both a distraction and potentially counter-productive.

-Is Paris wishing he had a smaller, simpler boat?

BOTTOM LINE: And I mean this–Dr. Paris is to be APPLAUDED for stopping when he did. I am sure, given all the preparation he and others put into this, that it was not an easy decision to make.

I do also think, however, given all the effort that was put into publicizing this project, that we are owed a more complete and coherent account of what happened.