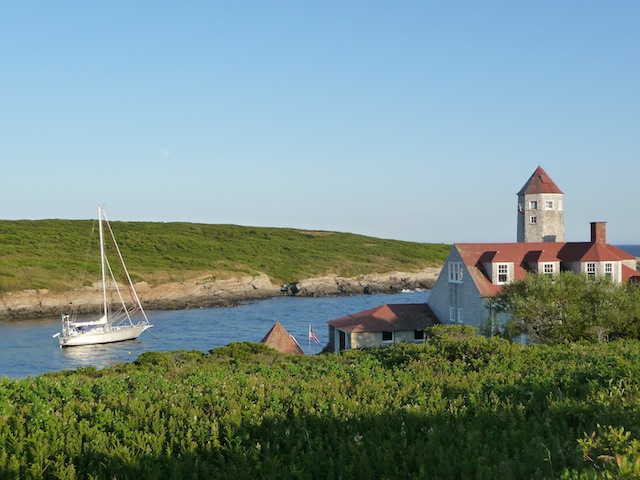 I USED TO COME OUT HERE when I was young, in an outboard skiff or a Drascombe longboat with a spritsail. I was in love with the abandoned Coast Guard station at the entrance to the tiny slit-trench harbor and often daydreamed I would someday live out here in that house, all on my own. I was used to the tall dark pines of our island in the Kennebec, and to me the landscape of this island, altogether treeless, with grass and thick shrubbery reaching in all directions, seemed alien and exotic.

Small as it was, the very fact of the harbor also made the island appealing. We kept our boats moored on the open tide-wracked edge of the mighty Kennebec, and whenever we wanted to sail on open water we had first to clear the river entrance, a sometimes tricky affair. Here you could moor a small boat quite securely and in an instant be out sailing looking at mostly horizon in all directions.

Because I so loved that wreck of a building, I still love to visit this island, but it does make me sad. The old Coastie station has been fixed up and is now inhabited by someone who is not me. Or at least it looks inhabited. Whenever I visit now I see a flag flying, chairs set out on the lawn, but never any people. It is as if they cannot exist, because I once dreamed I was them.

When I was young it was hard to explore the interior of the island, as the undergrowth was intensely thick and there were no proper trails. Whenever I came here I wandered through the empty Coastie station, dreaming my dreams, and also visited another abandoned house that stood on higher ground overlooking all of the harbor. That house is gone now, and instead there are smaller structures of much more recent vintage–a tiny “museum” and a caretaker’s cottage, which is inhabited, usually by a couple, during the summer months. These are maintained by the Nature Conservancy, which now also maintains a well-groomed network of trails that make it possible to explore the island in some detail. 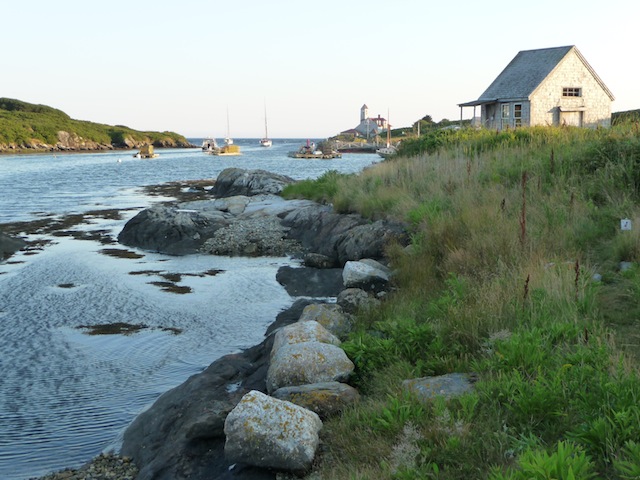 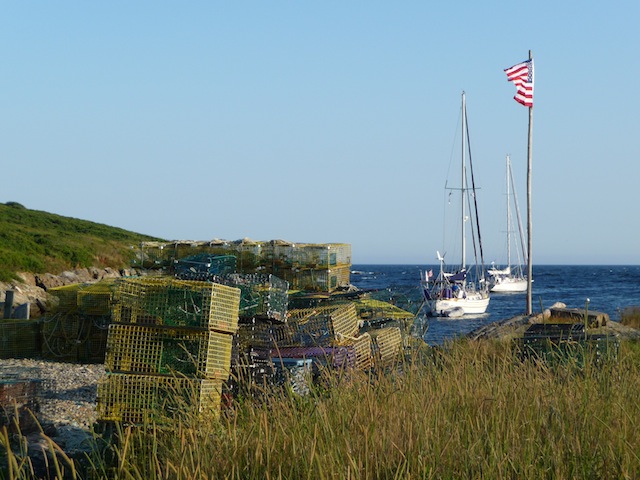 The one thing that has remained absolutely constant is the fishermen. At the turn of the 17th century (no one knows exactly when they first started coming) European fishermen crossed the North Atlantic and camped here so as to exploit the untapped bounty of these waters. This was long before anyone settled in Jamestown or the Plymouth Colony (which in fact sent to Damariscove for supplies when they were in trouble in the 1620s), and this little island may well be the oldest more-or-less continuously inhabited ex-colonial outpost in all of North America.

When I was a boy there were always lobstermen camping here during the summer in a small shack ashore, with their boats and great cars stacked with traps secured in the harbor. And today there are still many traps stored here, and lobster boats that come and go, although it seems the fishermen no longer sleep ashore.

At its peak, after settlers attempted to civilize the mainland, there were more than 300 people living here when Indians first waged war against the Europeans in Maine in 1676 and drove them all out to the offshore islands. In 1689 the owner of the island, Capt. Richard Pattishall, along with his dog, were caught and murdered by a band of Indians at Pemaquid. The story goes that they threw the two bodies into the sea, and they washed up on Damariscove, and that their ghosts haunt the island to this day.

As late as the 1920s there were as many as 30 people living here, plus the fishermen, and seven members of the Coast Guard, who manned the lifesaving station, which was built in 1897. But when the Great Depression came in the 1930s most people moved ashore, and the Coastie station was finally closed in 1959, just two years after I was born.

Visiting this year aboard Lunacy, all on my own, eastbound from Ridley Cove, I hiked all the trails on the south end of the island (the north end was off-limits, as birds are breeding there) and for the first time in my life made it all the way around the freshwater pond north of the harbor and to the old observation tower on the east side of the harbor. 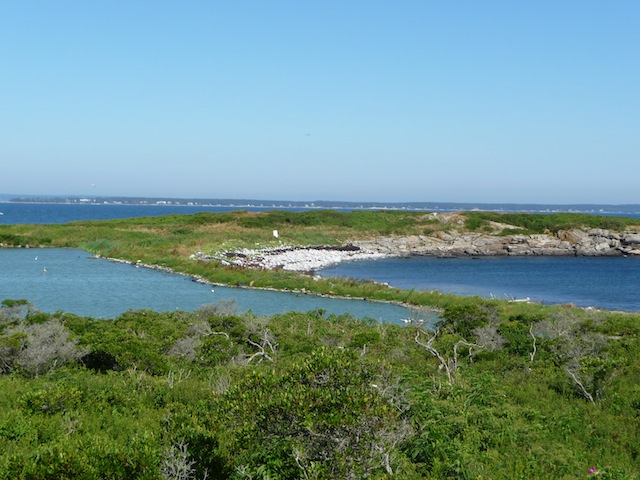 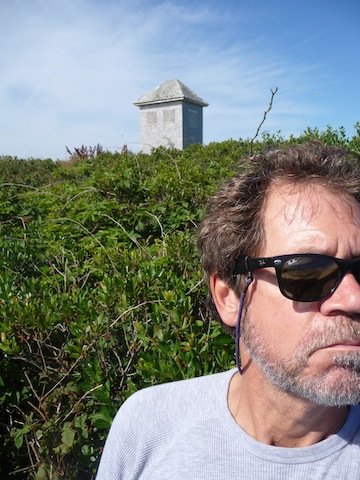 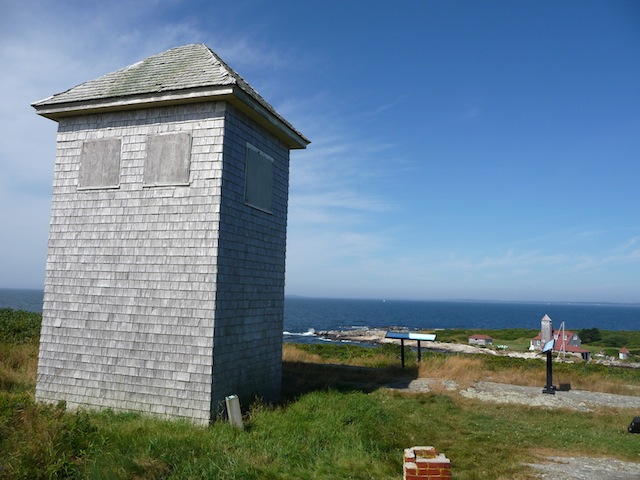 Lunacy was one of three sailboats that anchored here overnight, and I have to say the situation felt a bit tenuous to me. I was anchored furthest out, right by the Coast Guard station, and though I expected the southerly breeze to die down in the evening, it blew all night, straight into the harbor, and brought some waves with it when the tide was up. Supposedly as many as 30 ships at a time fit in here back in the day, but I find that a little hard to believe. I spent a mostly sleepless night worrying about whether my anchor might drag, or whether the wind might shift so far west as to put me up on the harbor’s eastern shore.

The most secure transient by far was this little boat, Sea Fever, which lay to two anchors right off a lobster car in the very calm northern end of the harbor. This was the size vessel I imagined keeping here back when I was a boy. 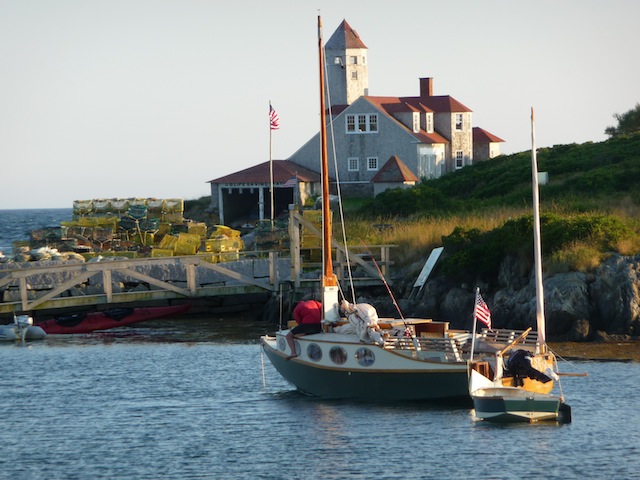 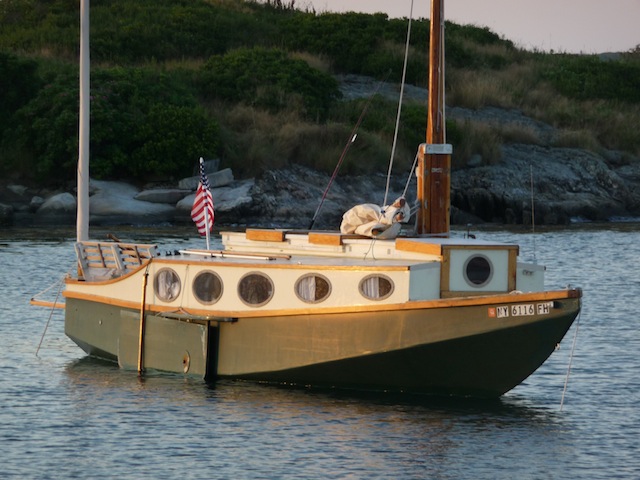 But I never really imagined anything quite like this. A hard-chined hull with a plumb stern and long overhang forward. Huge cabinhouse with sides flush to hull; no sidedecks, but instead of clambering over the top of the cabin, you can pop out a proper companionway at its forward end to access the bow. 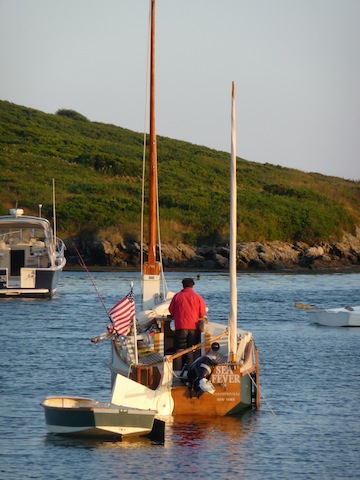 The truly odd thing about the boat is that everything is offset, with no major working parts on the centerline. The one leeboard is mounted on the hull’s starboard side, as is the mizzenmast, which is stepped right aft on the starboard quarter. Both the rudder and mainmast, stepped in a tabernacle, are offset to port.

I didn’t get to see what kind of sails fly on those free-standing masts, but I’m guessing they are spritsails.