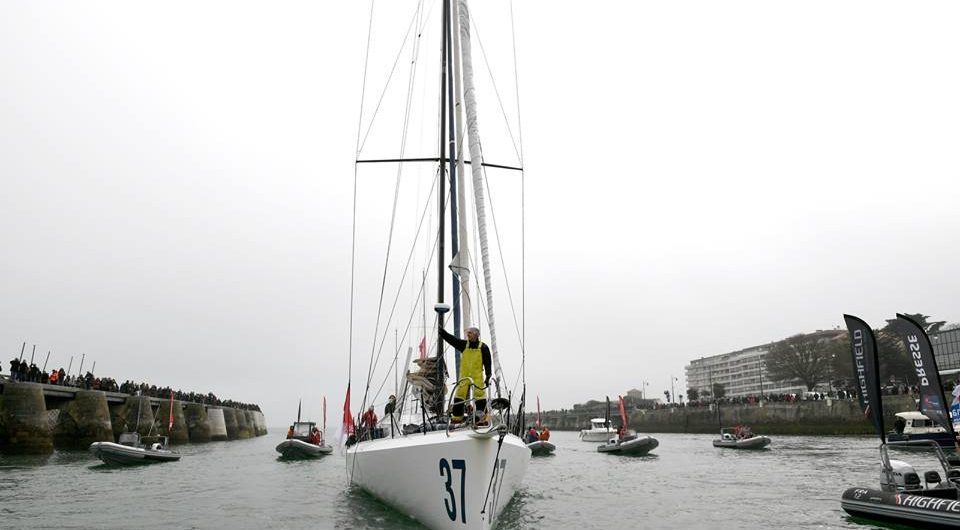 After running much of the Vendee Globe in 14th place (out of an original fleet of 29), the race’s only wholly American competitor, Rich Wilson, got lucky as he started closing on the finish line in Les Sables d’Olonne two weeks ago. It wasn’t the sort of luck you openly pray for, as it came at the expense of another competitor, the half-American Conrad Colman (the other half is Kiwi), who was ahead of Rich in 10th place when his boat, Foresight Natural Energy, was dismasted less than 800 miles from the finish. Conrad did cobble together a jury rig, but he hasn’t been fast enough to stay in front of Rich, and so it was that Rich finished in 13th place the day before yesterday.

Really a fantastic moment! Every time I watch this viddy I start tearing up:

It is a remarkable achievement. Rich, at age 66, is the oldest competitor to ever finish the race. Having run the course in 107 days, 48 minutes, 18 seconds, he beat his old time from the 2008-09 race by two weeks and now holds the record for fastest ever non-stop circumnavigation by an American, having improved on Bruce Schwab’s time from the 2004-05 race by better than two days.

Objectively, Rich had a pretty easy race, as he didn’t experience any major technical problems. But subjectively, of course, there is no such thing as an easy Vendée Globe. Rich himself has been pretty up front about the fear factor involved:

When I got the boat [Great American IV, ex-Mirabaud] from Dominique Wavre we were at dinner and he asked me if I wanted to know how fast the boat had gone. I said no because I did not want it as an objective and I did not want to be scared. But he wrote it on a piece of paper and it was 35.7 knots. I said to myself if I ever see a three in the tens column I will be under the chart table crying. One day when I had the fractional gennaker up and one reef in the mainsail, the boat took off in 48 knots of wind. The boat went under the water. It was a submarine. The next day I looked at the data and saw we hit 31.2 knots. I remembered something Brian Thompson said, that the highest speeds are always under autopilot because the autopilot is never scared. 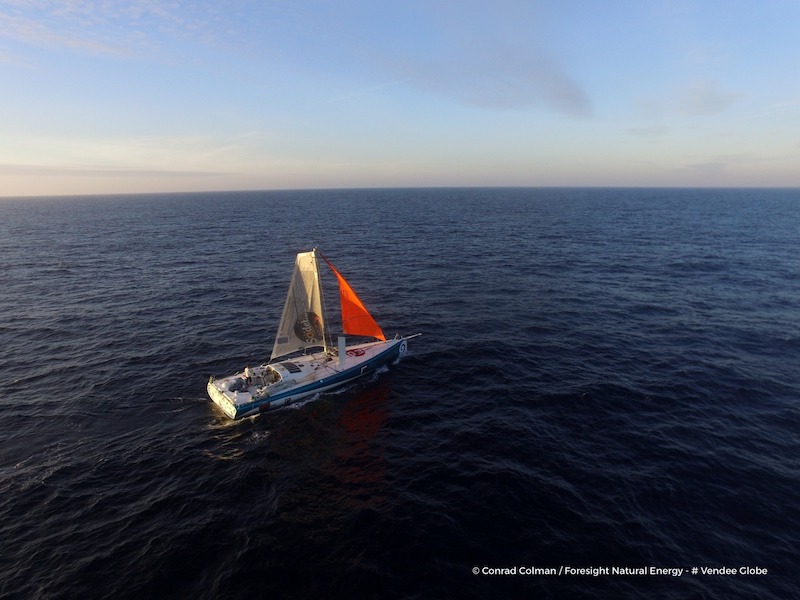 Meanwhile, poor Conrad is still struggling to finish the race under his jury rig and is almost out of both food and electrical energy. He’s been running Foresight as a zero-emissions boat, using only alternative energy, but had a few too many eggs in one basket, as he was relying mostly on hydrogenerators for power and now isn’t moving fast enough for these to be effective. As it is, if he hadn’t stuck on some solar panels at the very last moment while prepping the boat, he’d be screwed right now.

I was wondering about this actually back before the start, when I was inspecting the fleet in Les Sables. As far as I remember, Rich’s was the only boat with a wind generator on it, and it struck me as odd, as of course there is normally no shortage of wind in the Southern Ocean, so why not take advantage of it?

The short answer is that on these boats, moving at an average of 10 knots or better, the output from a hydrogenerator far exceeds the output from solar panels or wind generators, or even an engine alternator. Rich published energy-output comparison tables throughout his voyage, and this was the last one, from two days before he finished:

The difference is staggering. But you only get those huge deltas when a boat is moving at proper speeds. Take out the hydro power, and you’ll see wind was Rich’s next most productive alternative source of energy.

Another big issue I’m thinking about is collisions. Sailing World has just published a nice summary of the collision damage suffered in this race, and the sum total is considerable. (Note: one of the incidents cited in the story, Sebastian Josse’s lost foil, was not due to a collision, as I understand it. The foil actually was retracted at the time and it seems the damage was caused by twisting loads on the foil tip as the boat fell off a wave.)

As the Sailing World story notes, there’s a lot of junk in the ocean to hit. But with these boats I see two big aggravating factors. First, the speed they are traveling and their lightweight construction. Hitting even a small object at 15-30 knots greatly increases the resulting impact, and carbon fiber is not good at absorbing sharp blows like these.

Second, these boats with all their various appendages–rudders, daggerboards or foils, plus a long canting keel– present abnormally large targets. And the so-called Dali foils on the latest boats only make matters worse. 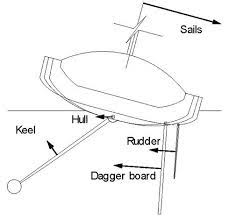 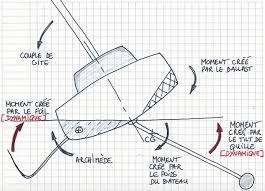 And of the new generation with a Dali foil deployed. (Note the rudders are deleted from this drawing.) I reckon the odds of any individual appendage being hit isn’t that much greater than before, but the overall odds of one of them getting hit has to be greater, as their overall horizontal spread is so much wider

I seriously doubt, however, there will be any movement to limit designs to mitigate this risk. Everyone seems to accept it as part of the game.

For current positions on all four skippers still at sea, check out the Vendée Globe tracking page.