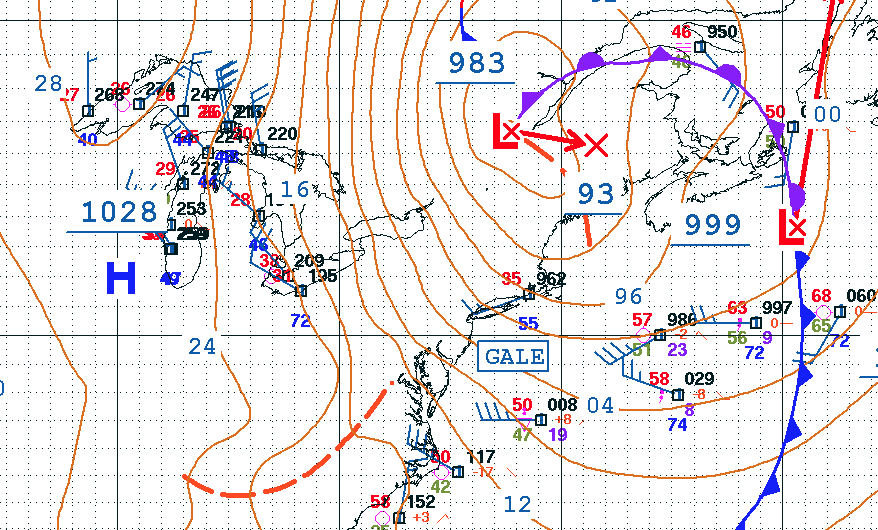 As I expected Lunacy’s putative buyers formally renounced our still-born deal as soon as I returned from the wilds of France. The late season and a lingering illness were the cited causes, but I had sensed other obstacles on their side. A less enthusiastic female partner and a need to borrow much of a boat’s purchase price are always problematic. So I quickly pointed Lunacy south toward Annapolis, where I figure she is much likelier to sell in the off-season. I made it as far as Huntington, New York, before I pressed the pause button to wait for this gale now raging off the Jersey shore (see image up top) and the advent of Thanksgiving.

I left Maine Yacht Center in Portland on my own last Monday, immediately after Steve Ecker (MYC’s electronics maven) and I ran a calibration sea-trial on the new Raymarine EV-100 tillerpilot he had installed to replace the antique and unfortunately defunct Autohelm unit.

(I should note that the work Steve did on Rich Wilson’s Great American IV during her refit at MYC was the talk of the Vendée Globe race dock back in Les Sables d’Olonne.) 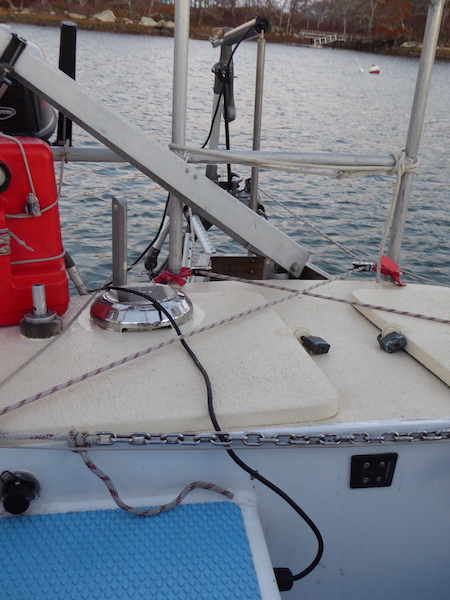 This is the new pilot ram installed to drive the head of my Aries servo-pendulum steering gear. This new unit, thankfully, is a drop-in replacement for the old one, with the same size mounting pin at the back, and the same size ram arm, with even the same thread at the end for screwing on extensions (like the one with my custom-fitted tab for attaching the ram to the windvane). What’s missing now is the old Autohelm black-box compass/brain/control-pad that used to hang on that black bracket you see to the right of the power cord 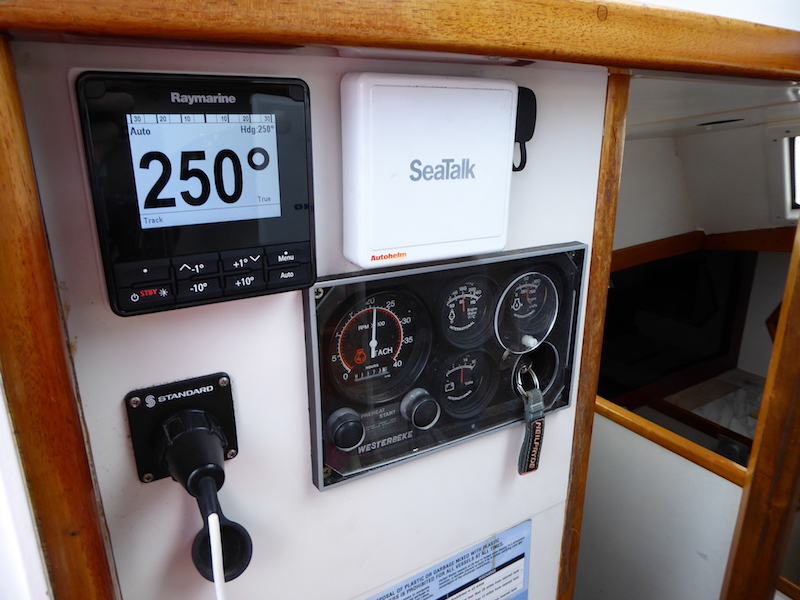 Now the compass and brain are installed safely below, and the new Raymarine p70 control head is mounted just inside the companionway. If desired the new unit can be controlled with a wireless remote; it can also be interfaced with other NMEA 2000 electronics, including a masthead wind sensor that would allow the pilot to steer to a wind angle rather than a compass course

The autopilot performed flawlessly. The engine did the same, which was a great relief. Indeed, replacing the fractured damper plate between the transmission and the engine (which caused the problems that initially frustrated the deal with the prospective buyers) seems to have had a miraculous effect. During all the time I’d run this engine in the past, a cruise setting of 2,100 RPM yielded a speed of about 5.5 knots, give or take depending on conditions. Now a more conservative cruise setting of 1,800 RPM yields speeds well in excess of 6 knots, and 2,100 gets the old girl storming along at 7-plus!

I’m wondering, of course, how this could be. All I can think of is that there must have been something wrong with the damper plate all along. Though of course I’m willing to entertain other theories, if you have any to share.

The extra power was certainly useful, as I ended up motorsailing almost all the way to Huntington against contrary wind. The first leg, from Portland to Provincetown, leaning into 14-17 knots of breeze at a 20-degree AWA took 17 hours and saw me picking up a mooring inside the P-town breakwater just off the fish-boat docks around 0400 hrs. The next leg, from P-town to the Cape Cod Canal entrance, saw me motor-dogging it into a solid 20-24 knots after I caught up on sleep and spent much of a day waiting for a small rainy gale to pass through.

My canal transit was highly unusual. My arrival at the Sandwich end of the canal was perfectly timed tide-wise, but my monitoring of the VHF radio revealed that the railroad bridge at the other end was popping up and down like a yo-yo on a string. Disturbingly, it was spending as much time lowered, if not more, as it was raised.

I have no idea why. I have transited the canal many times over the years and have never heard anything before about the railroad bridge ever being lowered. 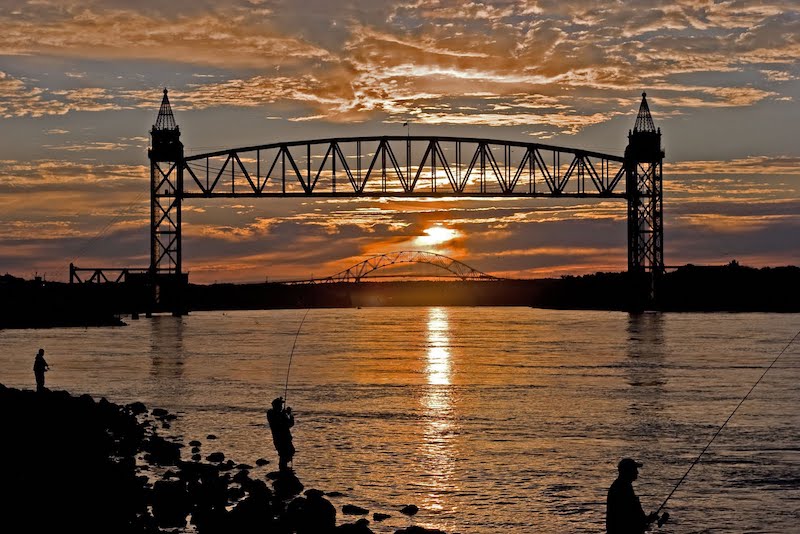 The bridge in question, where it belongs, in the raised position

For a vessel such as Lunacy this is a disturbing prospect. Once inside the canal in a small boat with a fair tide you are as good as flushed down a toilet. Stemming the 4.5-knot current with a 44-hp engine so as to avoid getting swept into a closed drawbridge may not be impossible, but it is certainly daunting. Through careful communication with Cape Cod Canal Control, I avoided this fate and emerged in a terrible maelstrom of standing waves in the exit fairway, where a brisk 20-knot southwesterly breeze was quarreling ferociously with the aforementioned current.

I survived this ordeal, by dint of much cursing and gritting of teeth, and eventually pottered down the northern part of Buzzard’s Bay into Hadley Harbor, the inner part, off the west side of Wood’s Hole, and exulted in its complete protection. 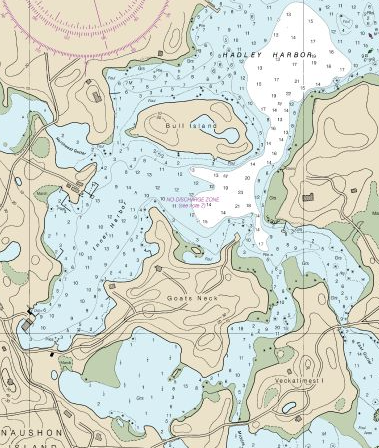 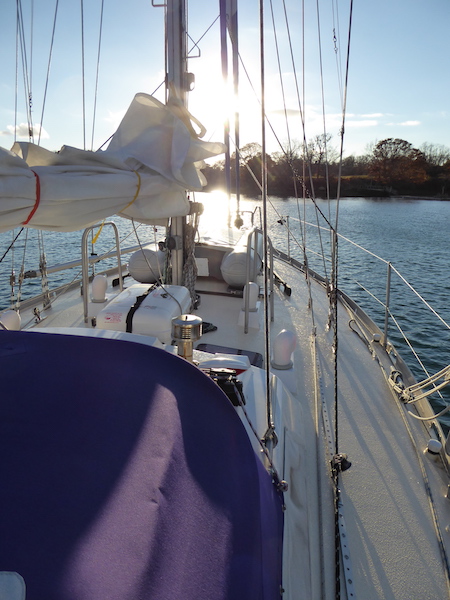 Just in time to watch the sun go down

I quickly ate a hot meal, dove into my berth, and awoke again at midnight to take advantage of a diminished breeze and fair current. I had hoped the breeze would be solidly northwest, so as to provide a good sailing angle, but it wasn’t, so again it was flame on with the motor. Nine hours later I arrived in Stonington, Connecticut, where I picked up a crew member, Bear Gibney, with whom I had sailed once before. 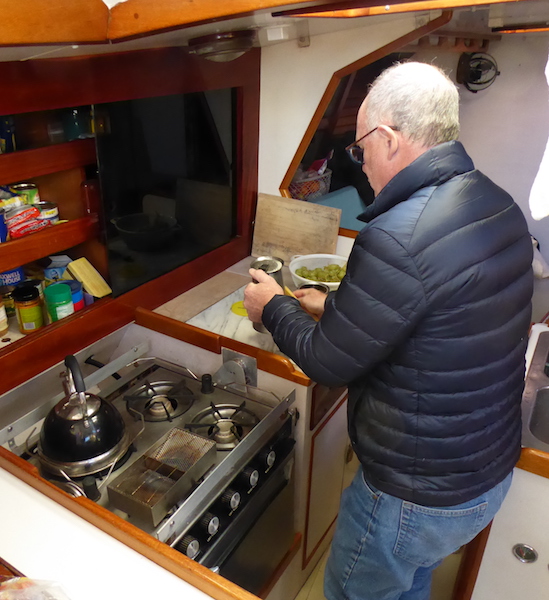 Bear makes coffee in the galley

It was on this next leg up the east end of Long Island Sound west of Stonington, last Thursday, that I at last had a chance to switch the engine off and let the sails move the boat courtesy of a brisk north wind. It was just a few hours, unfortunately, but I did appreciate it.

Just after sunset we put into a small cove just west of Branford Harbor, with good protection to the north, for a proper night’s sleep. 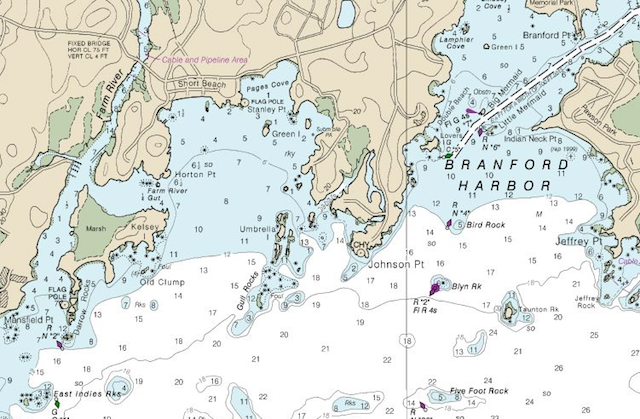 The cove, unnamed on the chart, was very comfortable and looks into a place called Short Beach 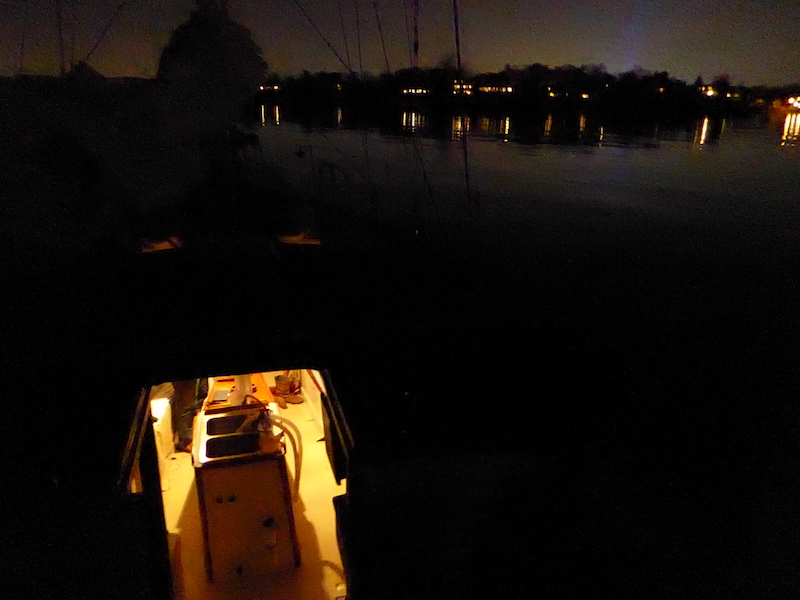 Viewed from the cockpit, after the trauma of anchoring

Setting the hook here was a great adventure. With Bear on the power windlass control and me humping the chain by hand through the bits where the much rumpled chain pile below refused to run through the hawse hole, we managed somehow to crush two fingers on my right hand in the windlass.

All I can say about this in print, diplomatically, is: OUCH!!! 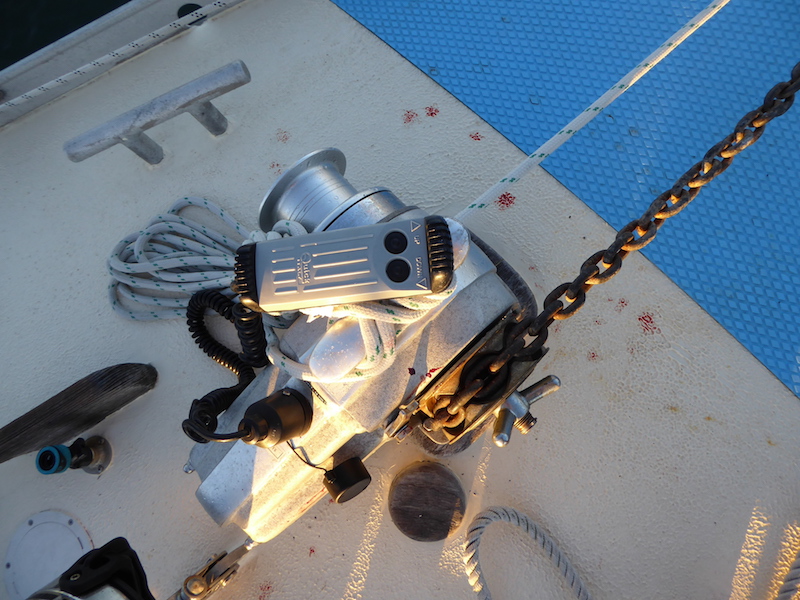 Blood on the foredeck. Scene of the crime in the morning, before rinsing 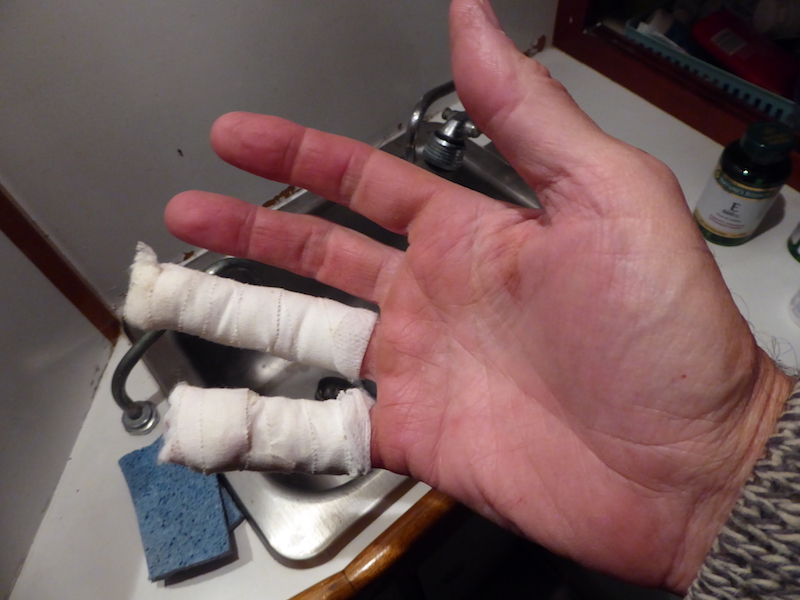 We did have a great night’s sleep. Or at least I did.

It was the next morning while motoring west down the Sound in a fairly null breeze that I started thinking hard about where to stow the boat while waiting for this impending gale (see image up top, again) to blow through. Pondering the tide tables for getting through Hell Gate into the East River in New York City, I noticed our course of the moment would take us clear across the Sound to Huntington.

And then came an obvious thought.

I immediately dialed my old friend Hank Schmitt (of Be Good Too fame), who is based in Huntington, but is normally delivering boats south this time of year.

“Hank, where are you?” I asked when he answered.

Turned out he had just flown back from St. Maarten the night before, and was set to drive with his wife up to Boston that afternoon to catch the Harvard-Yale game. He greeted us at the dock at the West Shore Marina in Huntington and before we could say “Jack Robinson” was driving us north to whence we came.

Delivery to be continued after the Thanksgiving holiday.

Afterthoughts: I forgot to include this photo of my new deck cleat! 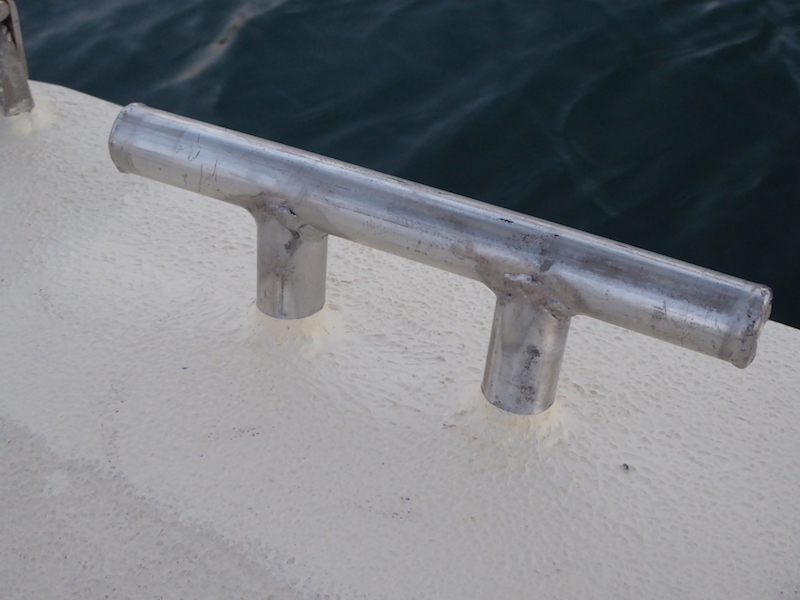 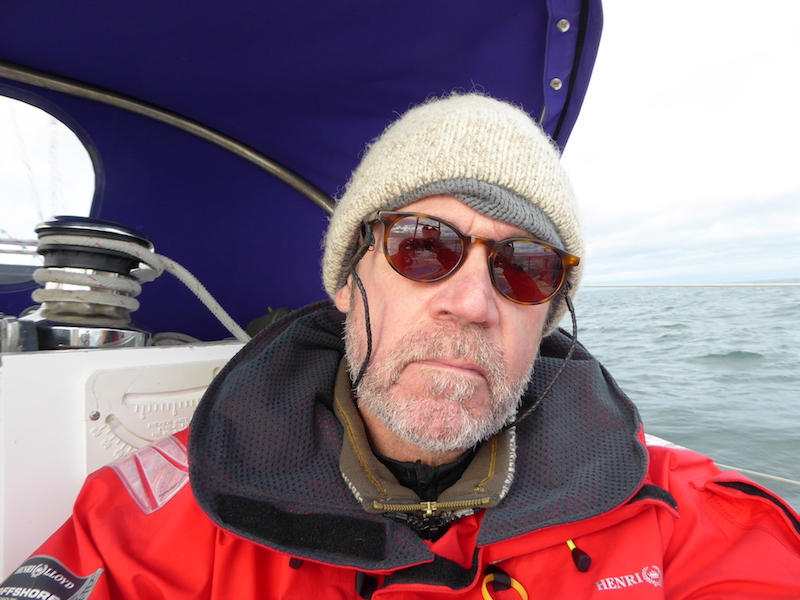 Not so beautiful, but at least well preserved