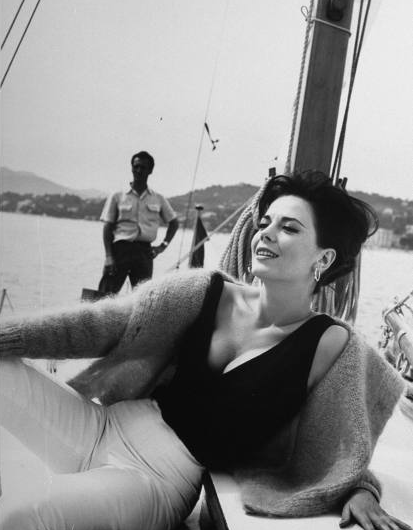 Women have long complained about how the world is dominated by men. To most men, meanwhile, it is perfectly obvious that modern civilization is little more than a plot to make women comfortable.

The truth, of course, lies somewhere in the middle. If it were true, as men aver, that it is women who rule the world, such things as pornography and the Three Stooges would probably be outlawed. On the other hand, if men really ruled the world, as women insist, society no doubt would be organized very differently. The men most likely would live in nomad biker gangs, and all the women and children would live in villages. The men would ride from village to village, impregnating women and fixing anything that was broken before moving on.

For many centuries, the sea was the one venue in which men might more or less realize this ideal existence. Even today, many would argue, sailing is very much a man’s game. The common platitude is that women enjoy the sailing scene, i.e., they like hanging out and socializing on stationary boats, but they don’t really enjoy sailing itself, i.e., the part where you feel nauseous while having water sprayed all over you.

As fun as it is to annoy women by saying such things, it really isn’t true. Women like Dawn Riley, Isabelle Autissier, Ellen MacArthur, and many others besides, have clearly demonstrated that the gentler sex is more than tough enough to excel at sailing. One of the truly amazing things about singlehanded ocean racing is that it is an extremely demanding physical sport in which men and women compete equally. Indeed, it may be the only sport like this. And this is possible because sailing is a sport in which brute strength doesn’t really count for much. Over the long run, sheer endurance, will power, heightened sensory perception, and ingenuity count for much more, and these are traits women and men share equally. 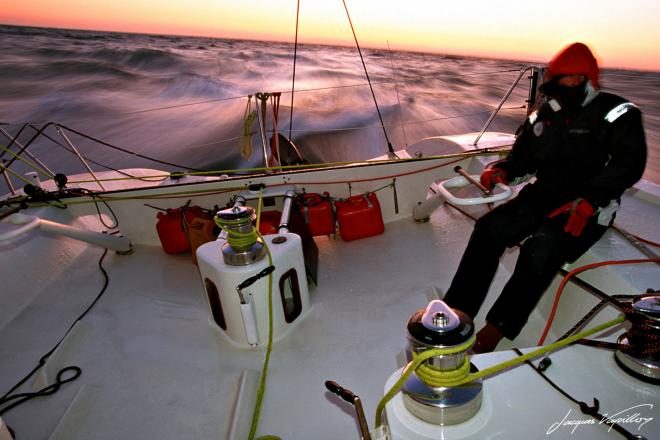 Isabelle Autissier, one of my personal heroes, aboard her Open 60 Ecureuil Poitou-Charentes in 1994

On the other hand, it is also true, when trolling the ranks of common cruising couples, that you most often find it is the man who is genuinely interested in sailing, while the woman has somehow been persuaded to come along for the ride. These relationships have profoundly influenced the development of the sport of cruising under sail, most particularly in the realm of boat design.

It used to be that a well-designed cruising sailboat was quite narrow and had minimal living accommodations. The galley might consist of a crude gimballed one-burner sea stove on which cans of gruel could be efficiently heated. The head was a cedar bucket. The berths were narrow and confining. The cabin itself was exceedingly cramped, and its inhabitants were constantly falling and stepping on one other. Not surprisingly, few women were ever lured aboard vessels such as these. 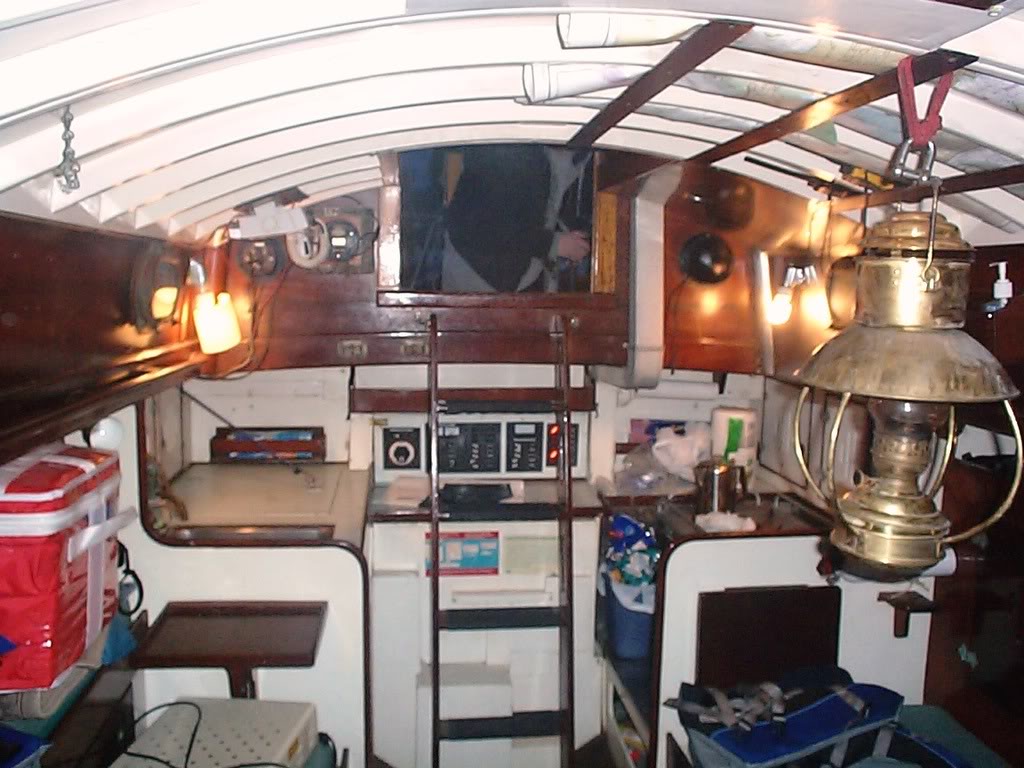 Before women started attending boat shows, most cruising sailboats had interiors like this

Slowly, by degrees, the situation has improved. Step aboard most modern production sailboats and you’ll find they are eminently habitable. For starters, they are much wider (hence are much bigger inside) than boats of the past. Often there is a large owner’s stateroom with a queen-size island double berth, commodious hanging lockers, a vanity perhaps, and a fully appointed head with a separate shower stall. Midships you will find a spacious galley, replete with most modern amenities, plus a comfortable saloon, and forward (or aft, depending on the design) you will find yet another comfortable stateroom (or two), with its own head, for guests and/or children. Men have been much more successful convincing women they might like to go cruising on boats like these, and this has helped the sport grow considerably over the years.

Some purists, of course, have objected to these trends. Sailing, they claim, is all about being miserable, and if the women don’t like it, they can just stuff it.

Many men like this, of course, also aspire to live in nomad biker gangs. Some of their complaints, however, do have merits, for in some respects modern designs do not work as well as older ones. For example, a wide flat stern that can easily accommodate a spacious aft cabin will help you go faster when surfing off the wind, but will only hurt you in other circumstances, particularly when beating to weather in a strong breeze. Being able to comfortably beat off a lee shore in high winds was once considered an absolute prerequisite for any “real” cruising sailboat. For some spacious accommodations may now seem just as important, but there are still just as many lee shores out there as there used to be.

One of my personal pet peeves is found in the modern saloon. Too often these days these fall prey to what I call CSLS (Curved Settee and Love Seat) disease. A curved settee opposite a pair of love seats may look sexy at a boat show, and may help convince your wife that buying a new boat is a fantastic idea, but in a seaway they look like nothing but misery. 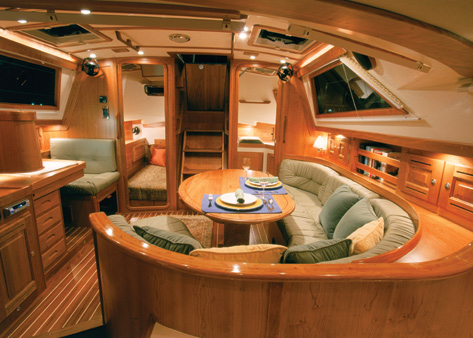 Now that women are attending boat shows, many cruising sailboats have interiors like this

Given that the most comfortable place to sleep in any boat at sea is amidships, long straight settees should always be the rule in any serious sailboat’s saloon. The other big problem with modern saloons, ironically, is how wide open and spacious they are. Those guys in the old narrow boats might have been falling all over each other, but at least they never fell far. Lose your footing in a modern saloon while a boat is well heeled and you may well fall quite a long ways–and may easily break something in the bargain.

Not that we should give in to the purists and return to the days of celibate discomfort. Some claim we can solve all that is wrong with modern cruising boat design by simply banning women from boat shows. Perhaps, but it won’t do the sport any good. Far better to keep the women aboard, and the men happy, by seeking reasonable compromises. There are, in fact, many designs out there that judiciously balance the competing demands of comfort and seakindliness. If we educate ourselves and favor such boats, there will only be more of them.

Women, of course, have also had a tremendous impact in the realm of systems. These have little effect on a boat’s sailing ability (except in so far as they may increase a boat’s total loaded displacement), or on crew safety, but they can greatly improve a boat’s livability. Amenities like watermakers, pressure showers, propane stoves, and refrigeration go a long ways toward making a cruising boat into a very comfortable vacation home. They do cost a lot of money and are difficult to maintain, but any man unwilling to shoulder such burdens to keep himself in civilized female company has only himself to blame if he ends up as a lonely singlehander.

Most modern men, of course, are willing to go to some trouble to keep their women comfortable. I remember, for example, a cruising couple I met some years ago while sailing in the Bahamas. His name was Leo. He was an avid sailor who could not abide not having a boat in his life. Her name was Judy, and she was a typical suburban housewife.

As Leo explained it to me: “Judy told me she wouldn’t go cruising with me unless she had air conditioning, wall-to-wall carpeting, a washer/drier, and a dishwasher. So I put all those things on the boat, and we’ve been happy ever since.” 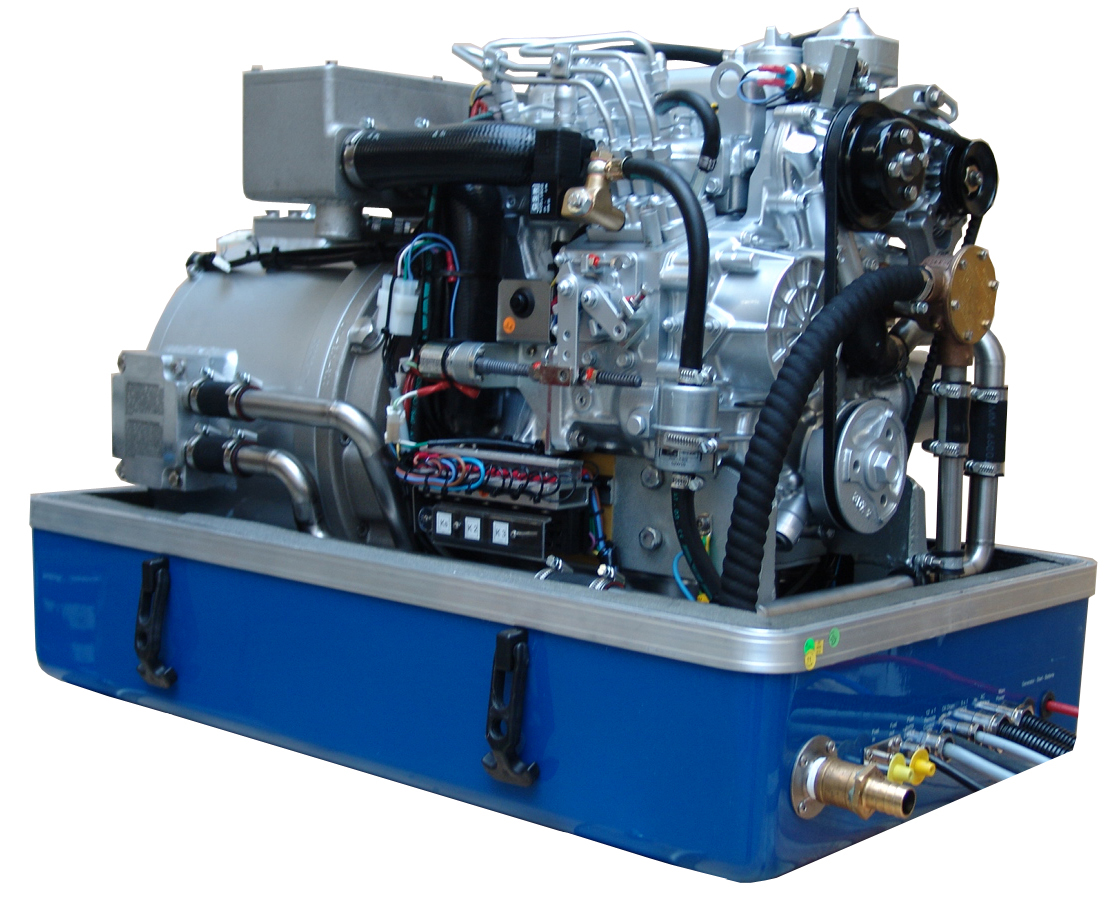 Of course, it took a lot of power to run all that stuff. Twice a day Leo had to run a large generator to keep everything going, and whenever he started it up, he’d shout: “Honey, quick! Turn everything on! We can’t waste all this wonderful electricity!”

Judy always complained bitterly about the racket. But Leo only smiled and cheerfully savored each offending decibel.