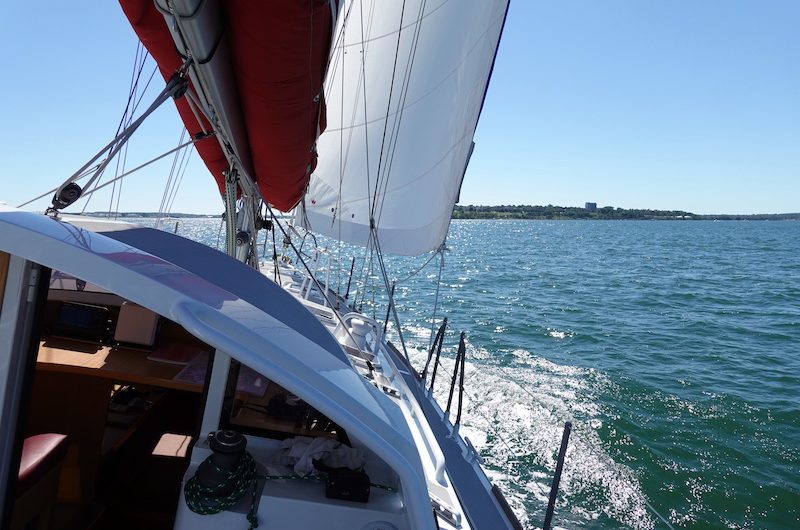 Sept. 23/2022:  I didn’t get in as much sailing on the Maine coast as I hoped this summer, for various reasons. But I was pleasantly surprised by the quality of the sailing that did take place. Back in ancient times, when I was a young person, summer sailing in this part of the world was pretty predictable. In the morning there’d likely be little wind, but in the early afternoon, as air over the land heated up and started rising, you’d get a firm cool sea breeze blowing in from the southwest to fill the void left by the hot air rising onshore. This breeze often blew as hard as 20 knots, would goose-pimple your skin if you were out on open water, and would continue blowing nicely until close to sunset. You could plan your cruising, or your daysailing, or your fishing expeditions around it, pretty much like clockwork. Except, of course, when the alternative pattern of days–or even sometimes weeks–of thick fog set in.

A sad thing I’ve noticed over the past decade or so is that the afternoon summer sea breeze has been weaker and sometimes is practically nonexistent. I’ve always guessed this might be related to the changing climate. Summers overall are now much warmer than before, and the Gulf of Maine is also heating up quite rapidly. It is, in fact, one of the fastest warming bodies of water on the planet. How exactly this would affect the sea breeze, I wasn’t sure. It had something to do, I supposed, with the altered differential between the air and water temperature.

This summer was different. Though much of the rest of the northern hemisphere has suffered, our summer here on the coast has been markedly cooler than in past years, much more like it used to be, with only a handful of days hot enough to make you uncomfortable. And lo… seemingly in support of my half-baked theory… we also have enjoyed a more reliable afternoon sea breeze.

So this summer I was able to sail more like I used to. Tend to boat chores or explore ashore in the morning, then sail off an anchor or mooring around noon or one-o-clock to wherever I could get to before sunset. Only once or twice did I have switch on the engine in the afternoon to get somewhere.

I didn’t get to any new places, but I did visit a lot of old haunts. 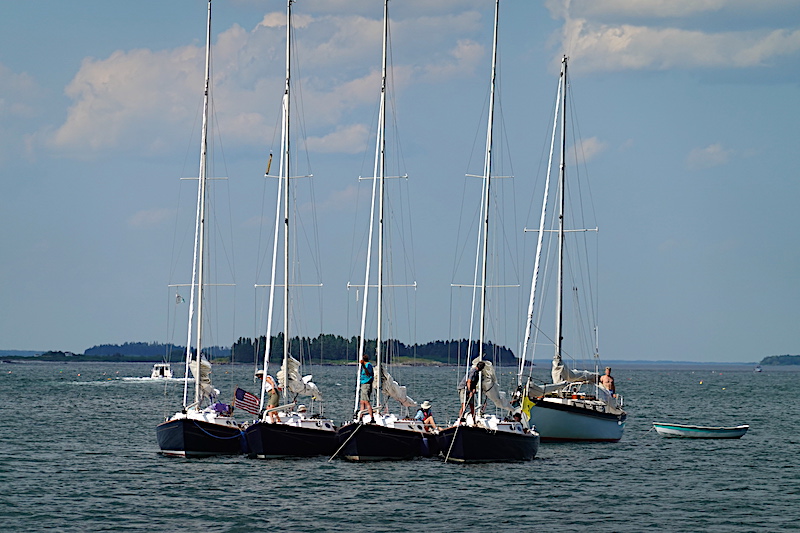 Seen at Jewell Island, a squad of fancy Alerions that came in and rafted up together on two smallish anchors, just in front of an innocent bystander on what I took to be a Southern Cross 32 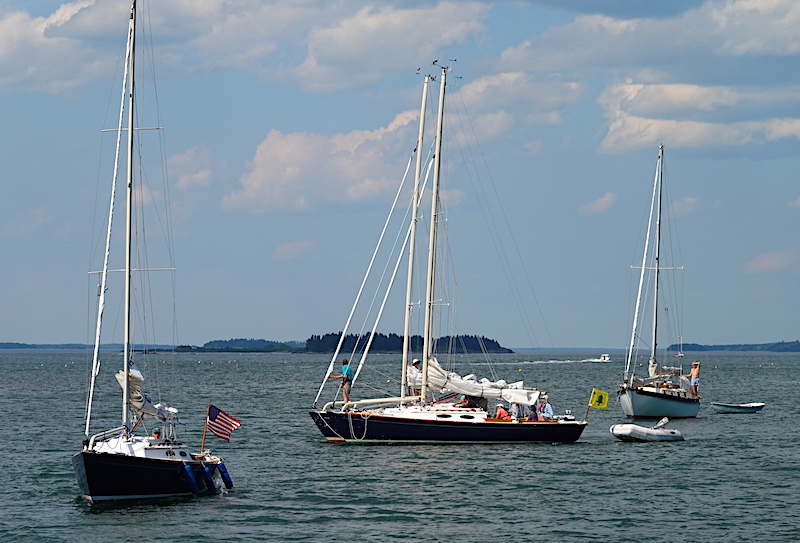 Predictably enough, there was a mad scramble when they all started dragging 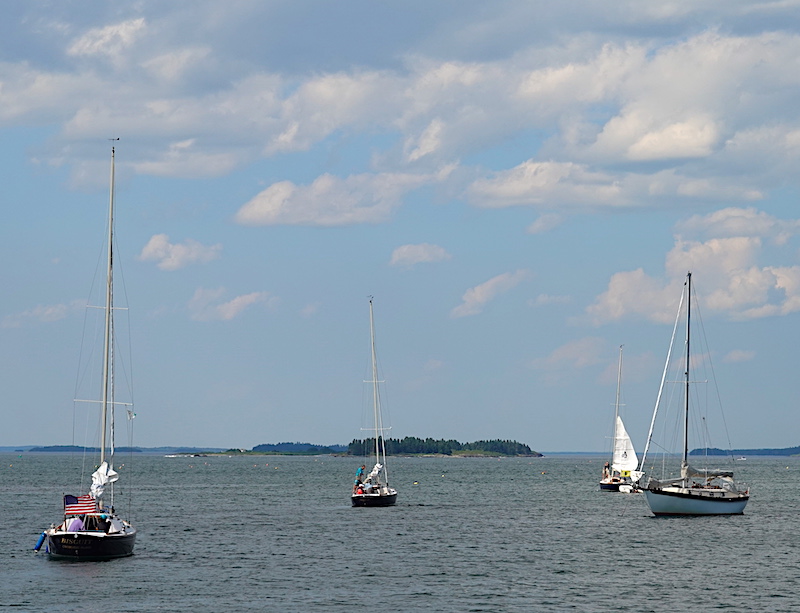 Then they all ran away and did not return 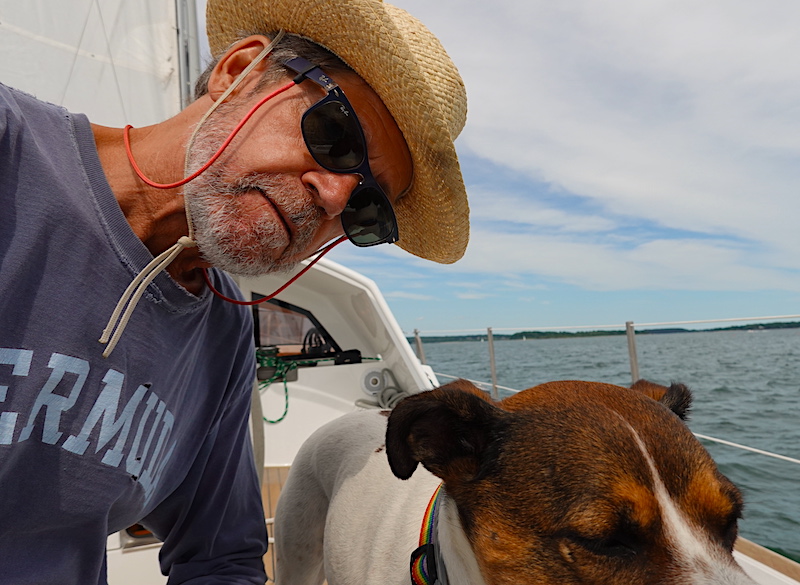 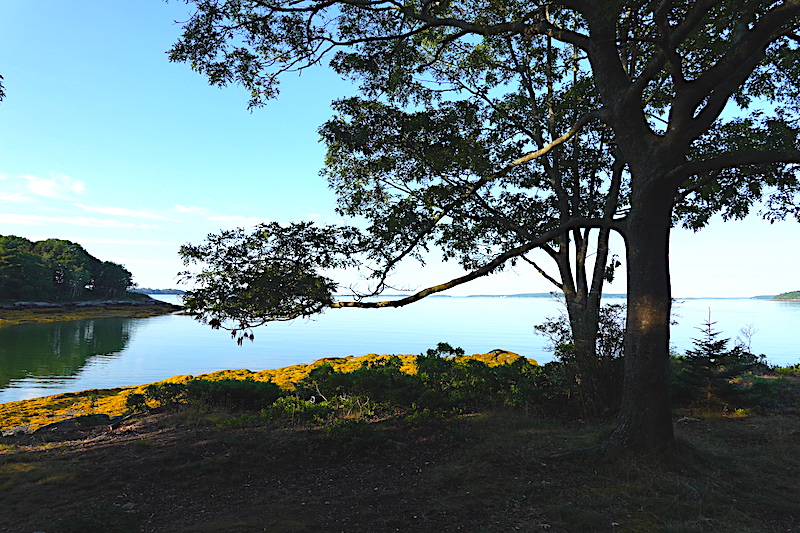 We made a cool discovery! There is now a trail open to the public at the south end of Lower Goose Island, which previously was totally private. A fair part of it runs right along the shore and is quite lovely 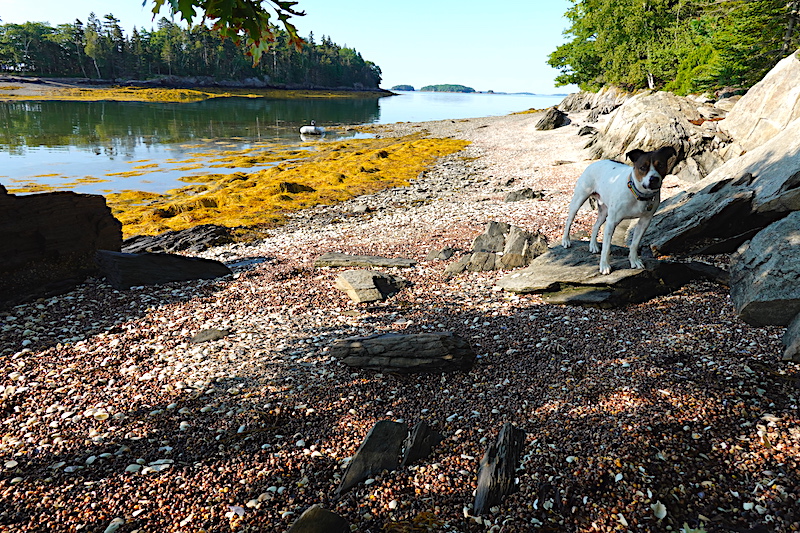 We also revisited the huge heap of tiny periwinkle shells on one of the Gosling islets just off the south end of Lower Goose Island. It occurred to me for the first time this probably cannot be a naturally occurring heap, but is more likely a proper shell midden left by previous seafood-loving inhabitants of the area. If so, they sure must have spent a lot of time picking the meat out of these tiny little shells 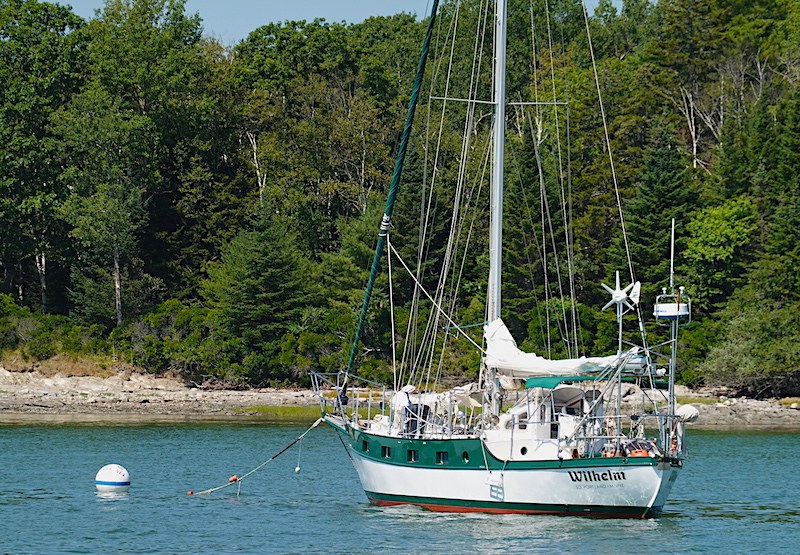 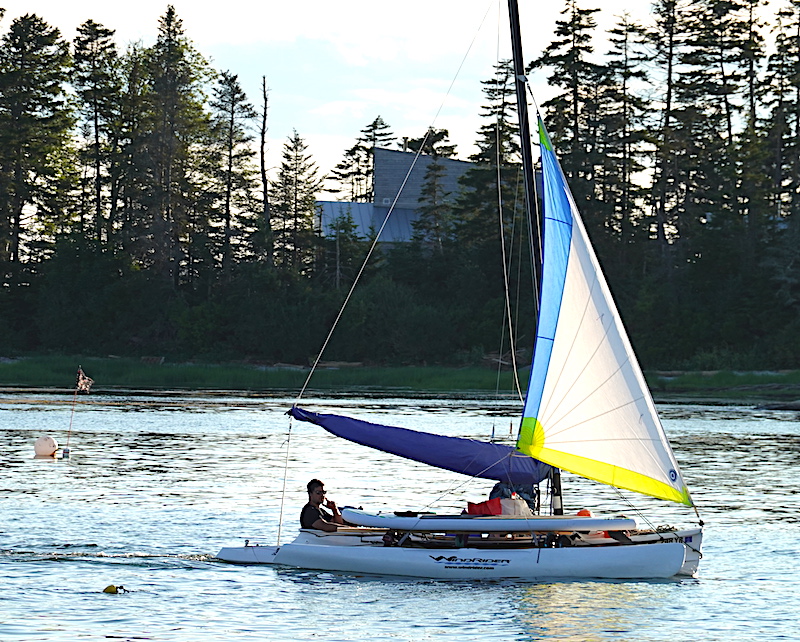 Here’s a tiny cruising boat I saw coming into Sebasco Harbor one evening. I was shocked to discover that Sebasco Harbor Resort now charges $60 for a night on one of their moorings! Might be a while before I stop there again 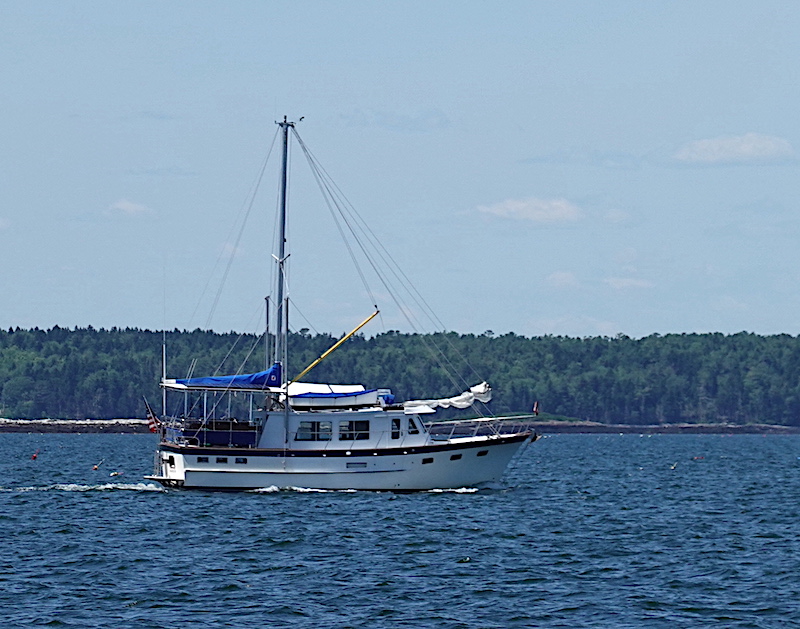 Now that’s what I call a motorsailer! 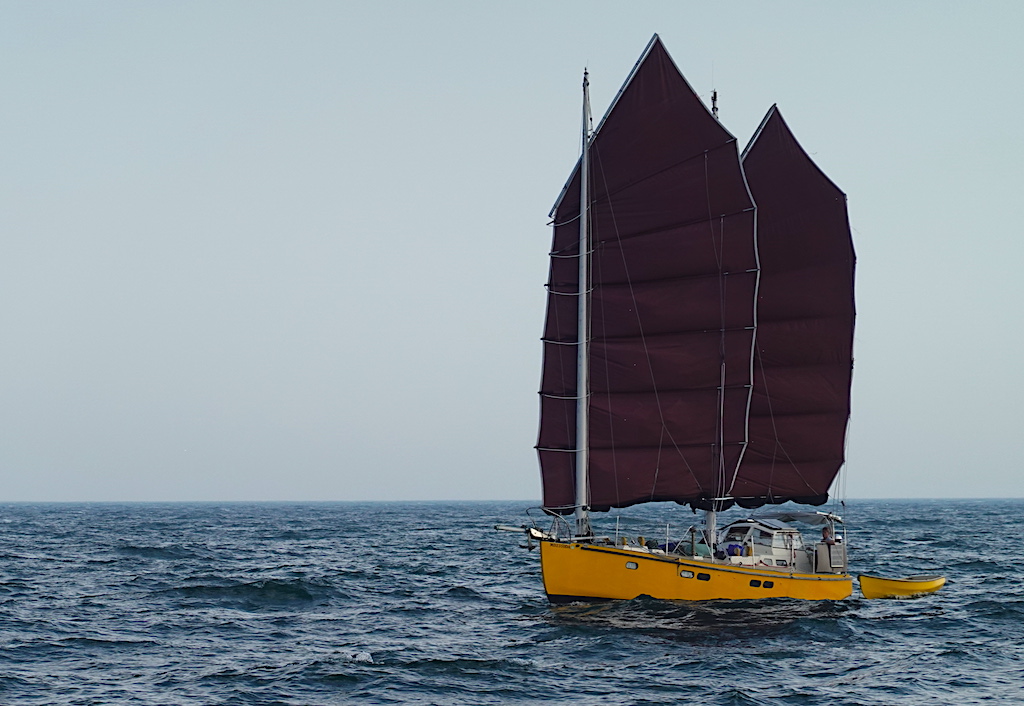 Here’s a very neat looking junk that chased me down one afternoon. I had them beat to hell going upwind, but they were considerably faster downwind! 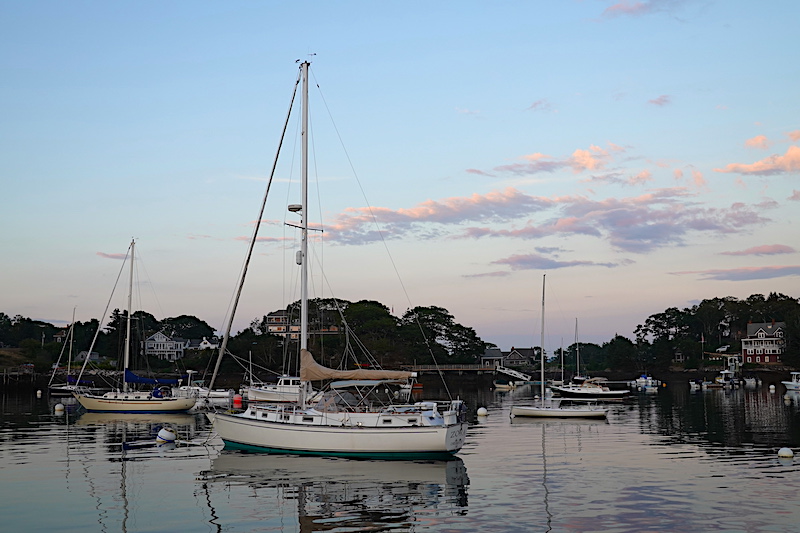 One place I stopped I hadn’t been to in a long time was Christmas Cove, on Rutherford Island, at the entrance to the Damariscotta River. I recognized that center cockpit sloop, Zora, straight off. She used to belong to my buddy Neil Collins, who formerly worked at Maine Yacht Center and now runs Robinhood Marine. While here I also visited with Gerry Douglas, who spends summers at Christmas Cove and is recently retired from running Catalina Yachts 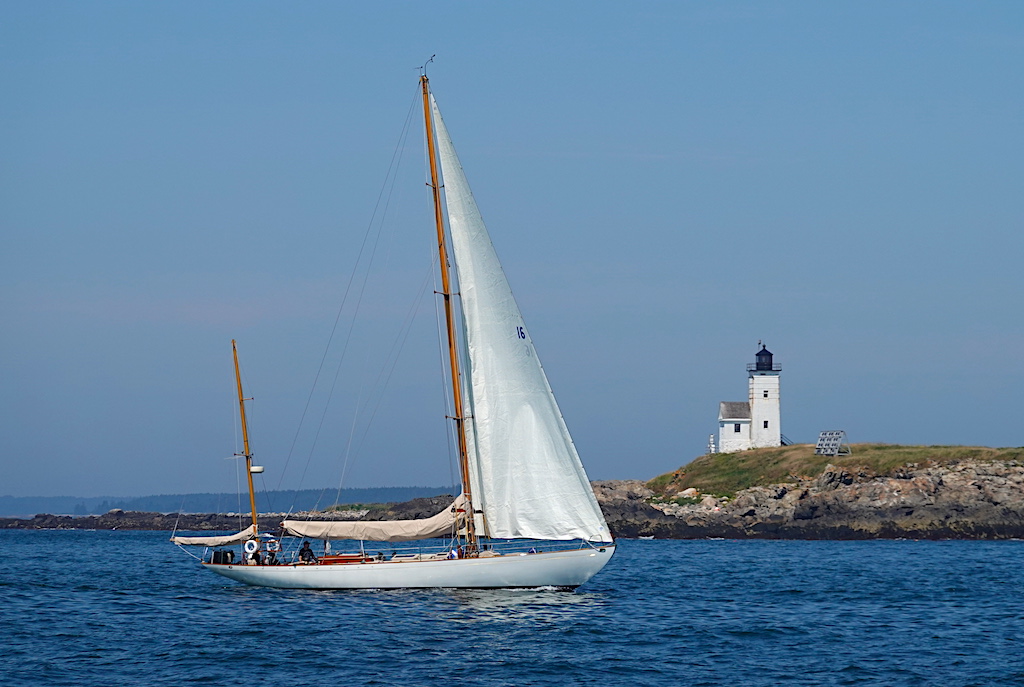 Here’s another old friend I ran into… the classic 52-foot yawl Dorade, on which I spent one fabulous day racing back in 2007. They were clearly motorsailing, but I was sailing, working a light to moderate morning breeze for all it was worth heading up into Penobscot Bay 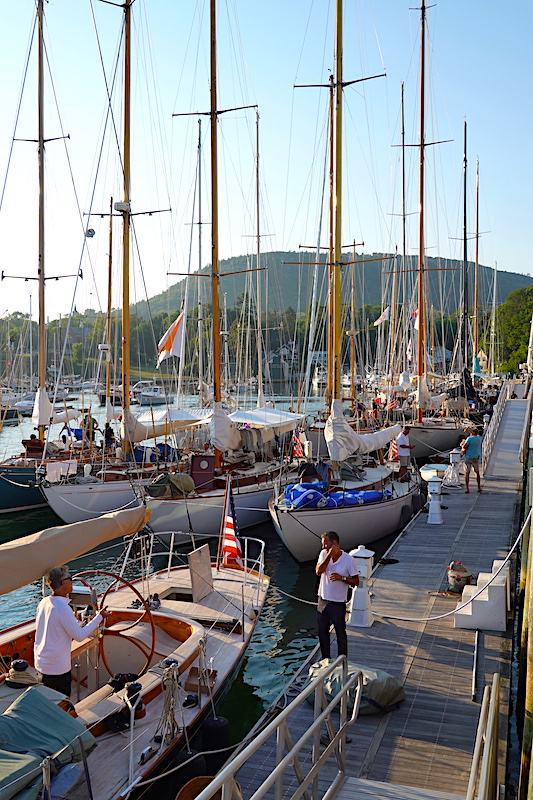 Dorade, like me, ended up in Camden, where I got to gawk at all the other fine wooden yachts that were gathering to run the Camden Yacht Club Feeder Race that leads into the Eggemoggin Reach Regatta over in Brooklin 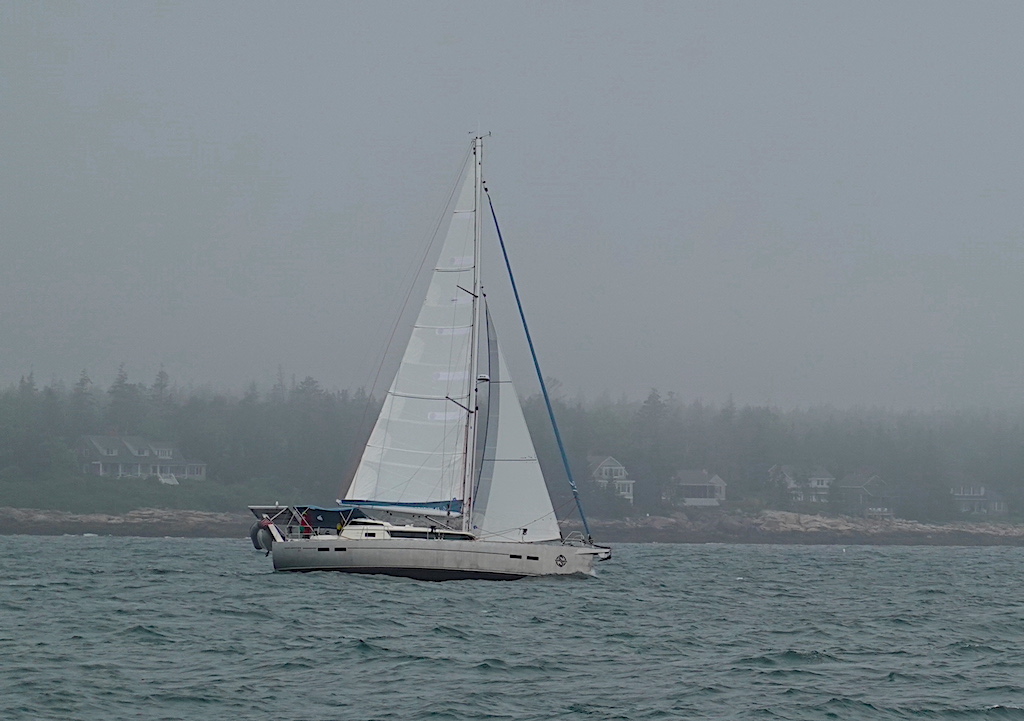 Sailing in the vicinity of Boothbay Harbor, I encountered this boat at arm’s length, a Garcia Exploration 45, sistership to the boat I once sailed with Jimmy Cornell from Florida through the Panama Canal 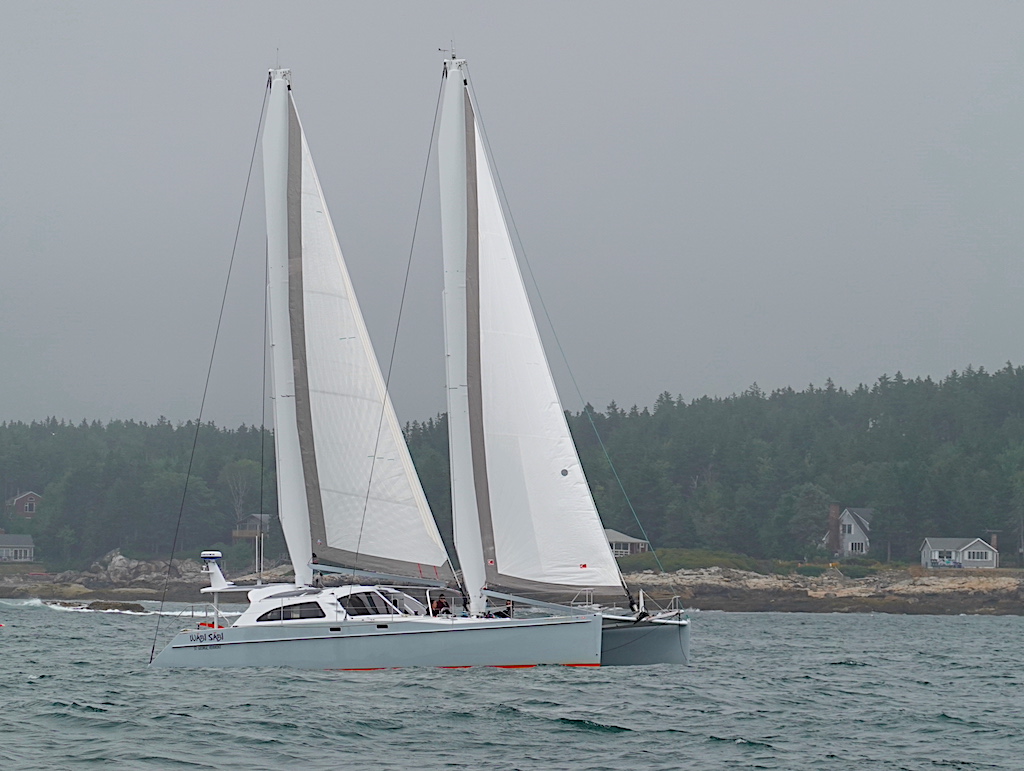 Then later this unusual craft, a MastFoil-rigged Atlantic 47 catamaran, designed by Chris White. I interviewed Chris about this unique design, then later test-sailed one in 2013. It’s fascinating concept, and I’ve been surprised by how many I’ve spotted “in the wild” 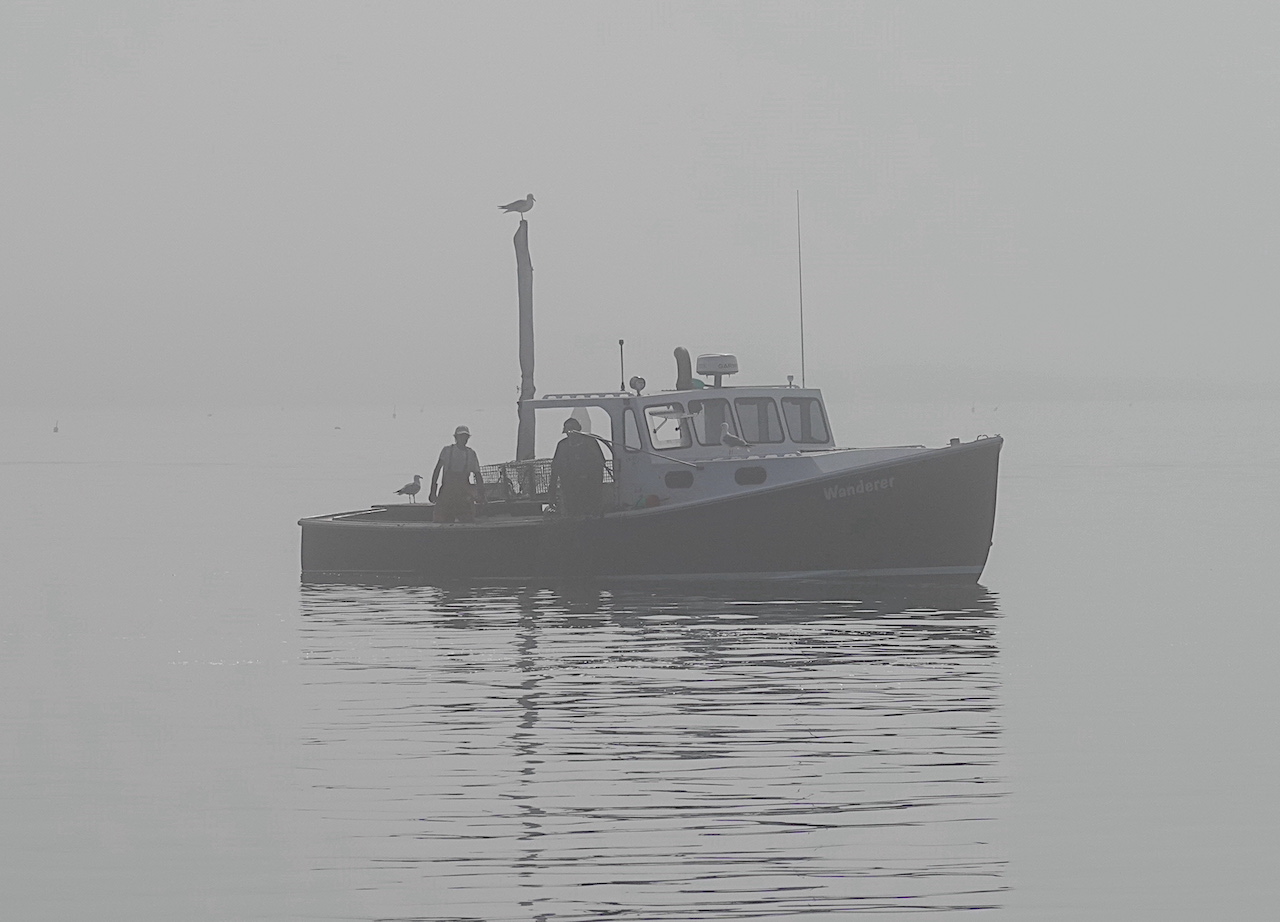 Another foggy day encounter. Looks to me like the gulls and guys on this boat are evenly matched 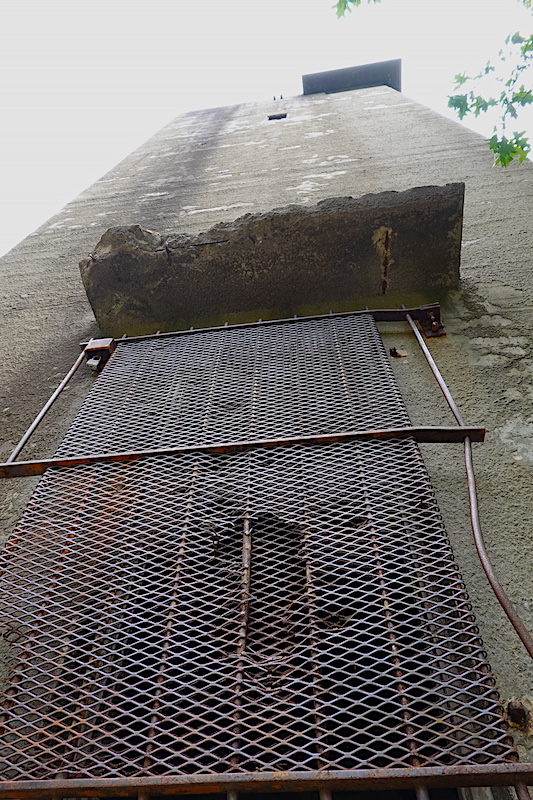 My last stop on that particular cruise was Popham Beach, the epicenter of my career as a sailor. With my old buddy Kurt Meinen, I hiked up to Fort Baldwin, where I was disappointed to find this old WWII observation tower was locked up solid. Back in the day, when we were teenagers, access was unrestricted and we often gamboled about on its concrete rooftop, with all the scenery of the coast laid out at our feet 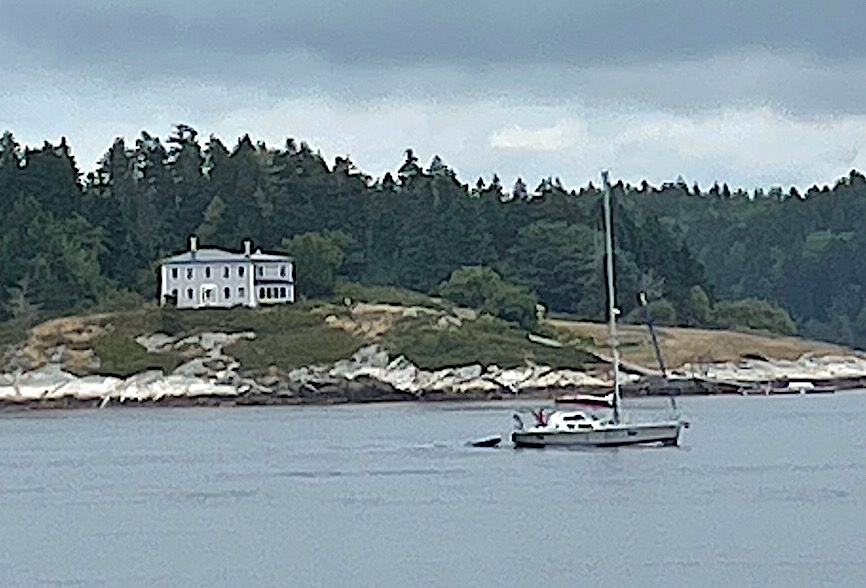 Here’s Kurt’s shot of me departing Popham the next day, passing by the house on Gilbert Head where my grandmother used to live 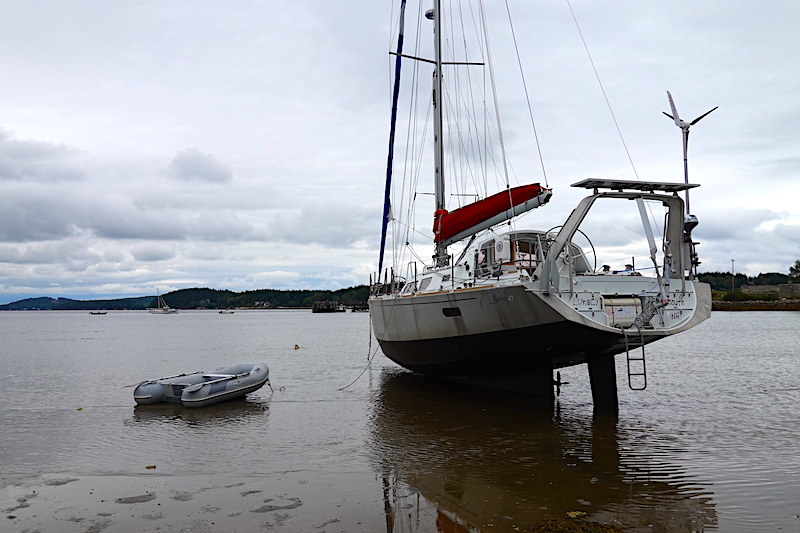 My last outing of the summer was another stop in Popham, where I dried out and scrubbed the boat in preparation for the fall season

There were also a few boat jobs I attended to over the course of the summer, including but not limited to: 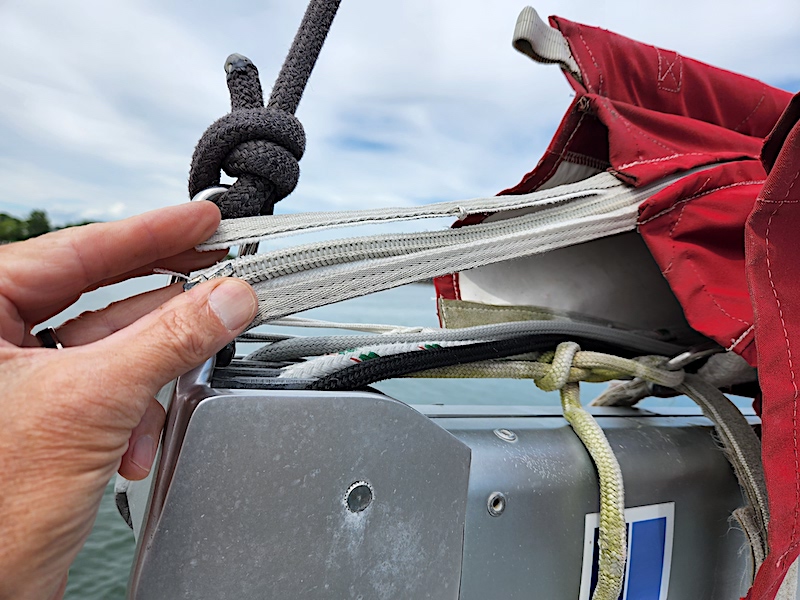 I finally got the blown-out zipper on my mainsail boom bag replaced, courtesy of John LeMole, best canvas guy in all the world, doing business as Gemini Marine Canvas in Rockland 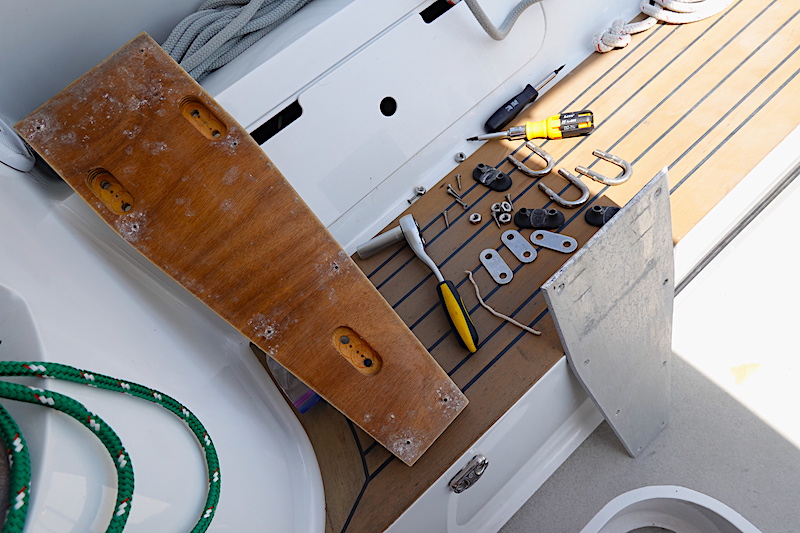 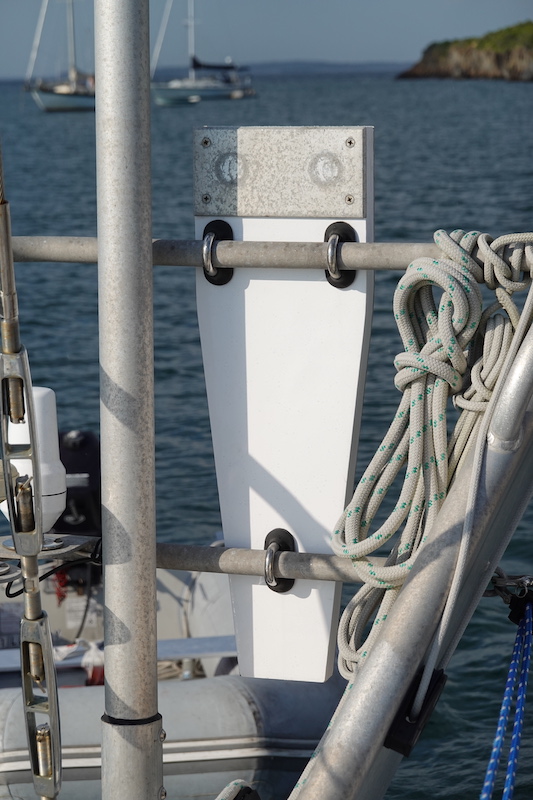 And refinished the outboard storage plank on Lunacy’s stern rail 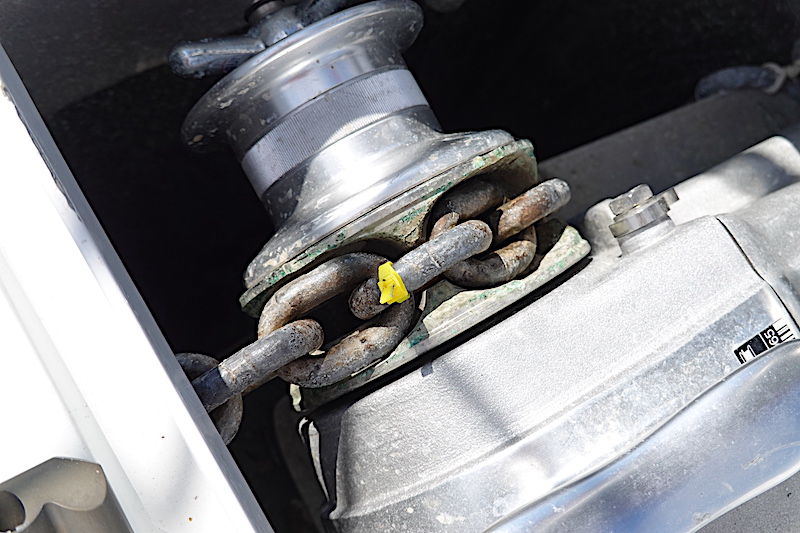 After trying unsuccessfully, and at some length, to rehabilitate the automatic chain counter on the boat’s remote windlass control, I finally defaulted to the tried-and-true analog method of marking the rode with colored wire ties at 15-foot intervals

Plus, there was a whole lot of nonsense involving the dinghy’s malfunctioning outboard motor, but we’ll save that for another post