June 12/2022:  Job one when I returned to the South Jersey Marina at Cape May on Monday, May 16, was to climb up Lunacy’s mast and invert the VHF antennae back to their upright positions. (You’ll recall I had previously flipped them upside down to fit more comfortably under bridges on the ICW.) I had put this off, for lack of crew, but now, with brother Peter aboard, I had a willing slave on deck (see photo up top) to grind me up the stick.In case you’re wondering, I had noticed on my solo voyage from Hilton Head to Cape May that my VHF performance was somewhat degraded with the flipped antennae. It seemed the range of my AIS transceiver was diminished, and I also had trouble picking up VHF weather channels when well offshore. 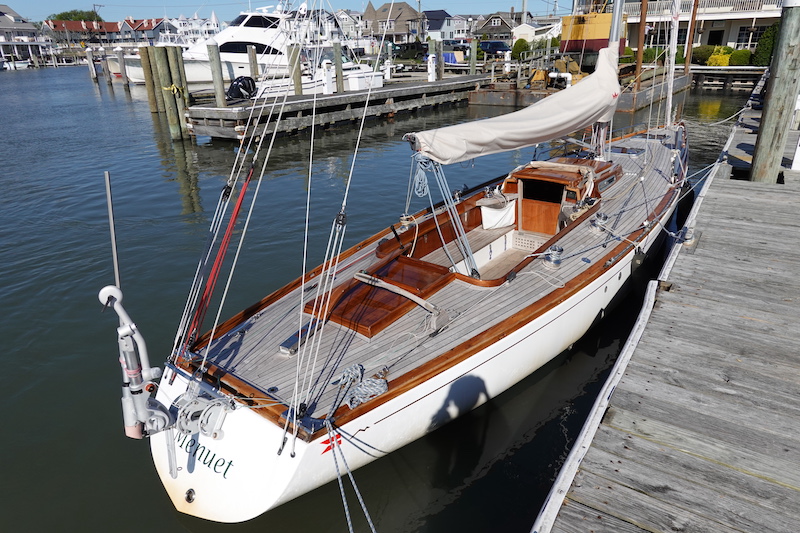 Seen on the dock at South Jersey Marina. Did this fine daysailer—flying a Danish flag (and a US courtesy flag), with a self-steering windvane on its transom—really sail here all the way across the North Atlantic Ocean??? Seems likely… and that would certainly rank as an impressive achievement! Can anyone tell me what type of boat this is? Or who this particular example belongs to? 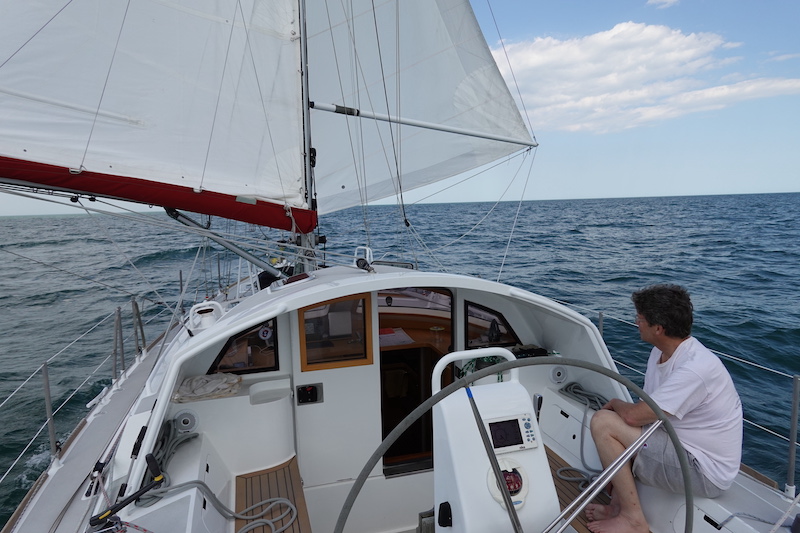 We had a good following breeze coming out of Cape May on Tuesday, but it was a bit fickle directionally. Here we see Peter late that afternoon admiring the stable wing-and-wing starboard tack set we finally achieved after jibing the boat back and forth a few times 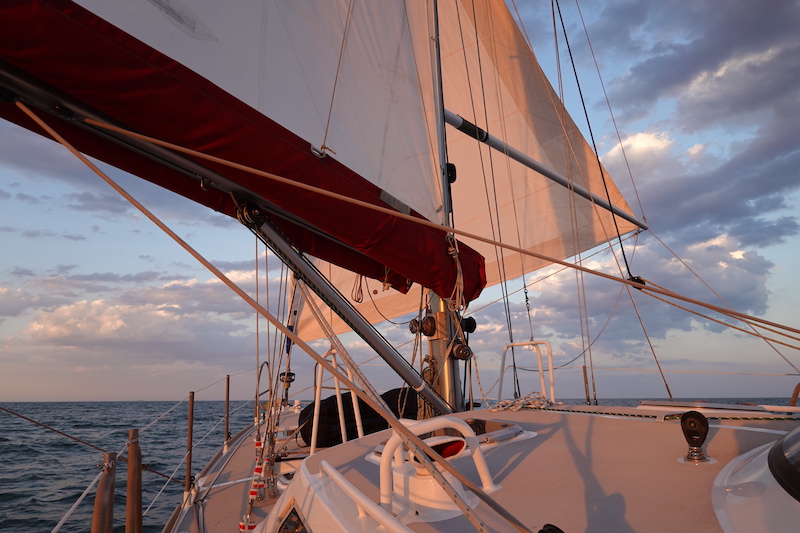 Same set, from an arty angle, later in the day, as the sun got closer to the horizon 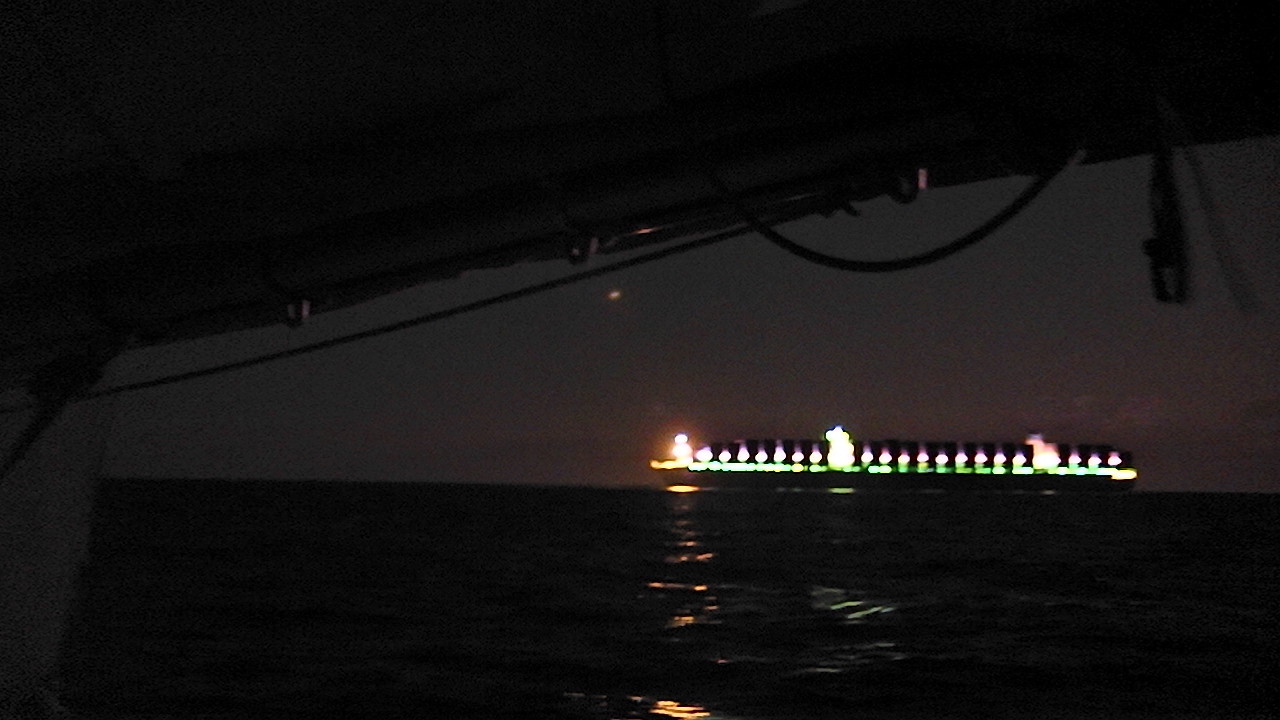 By 2300 hours that night the wind started shifting again, and we were closehauled on port tack while trying to sneak past this enormous (1,200 foot!) container ship, Cosco Excellence, anchored off the traffic lanes leading into New York City. This has been a recurring theme in this Age of Covid—seeing cargo ships anchored off major ports, waiting to get in to unload

In the 0-dark-hundred early hours of Wednesday morning the wind got shifty again and died away. We cranked up the engine, but after motoring only 30 minutes the overheat alarm went off. We shut down the engine and checked the strainer on the intake line, which was clean. We started the engine again, to see if there was in fact water flowing out the exhaust. I had noticed the drivetrain sounded a little rumbly, so I flicked the engine into reverse for a moment, in case the prop was foul. Peering over the side of the boat immediately afterward, we saw good flow out the exhaust. We concluded the overheating was likely caused by crap on the prop and proceeded on our way while keeping an obsessive eye on engine temperature, which remained normal and stable. About two hours later, when the wind returned, we shut down the engine again.

We spent all that morning after sunrise sailing with, once again, an immense cloud of flies tormenting us. Not long after noon, as the wind died again, we once again started the engine. This time we found no water flowing out the exhaust, only puffs of white smoke, with the engine temperature quickly rising above normal. We promptly shut down and did a bit of troubleshooting—verified the intake through-hull was clear and developed elaborate theories as to what might be happening.

Meanwhile, we sailed very slowly in the weak breeze, then more quickly as it grew stronger. By now we had decided to head for Newport, Rhode Island, rather than the Cape Cod Canal, so as to hopefully get the engine repaired there. 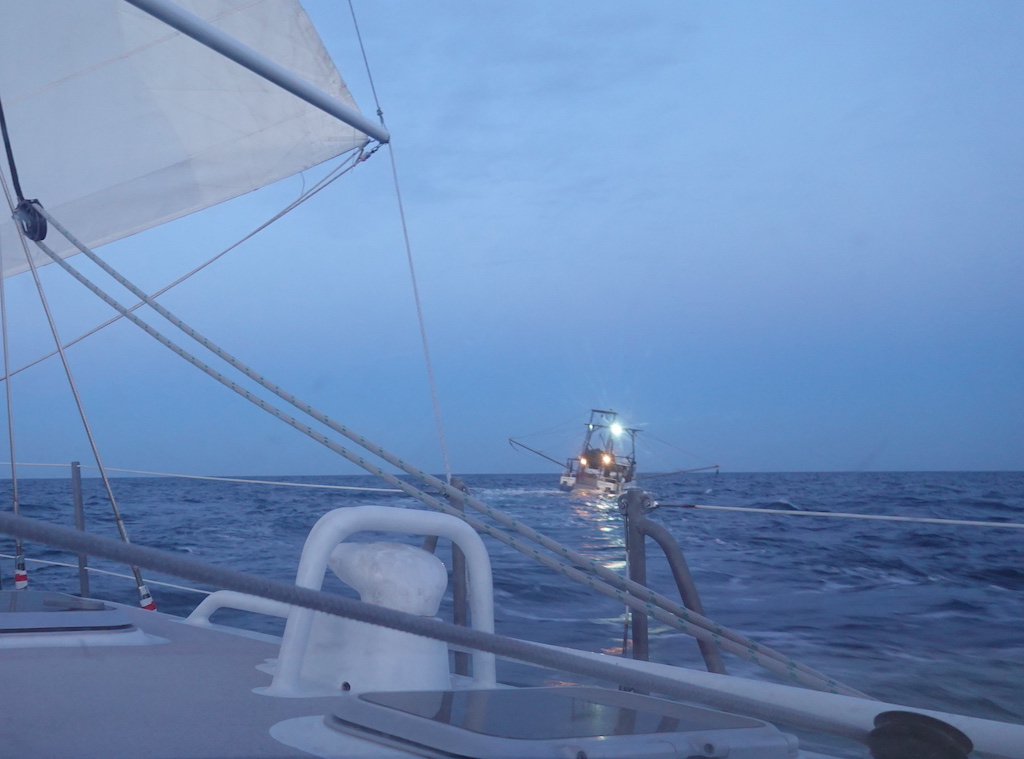 Close encounter with a fishing boat that evening, not too far south of Narragansett Bay 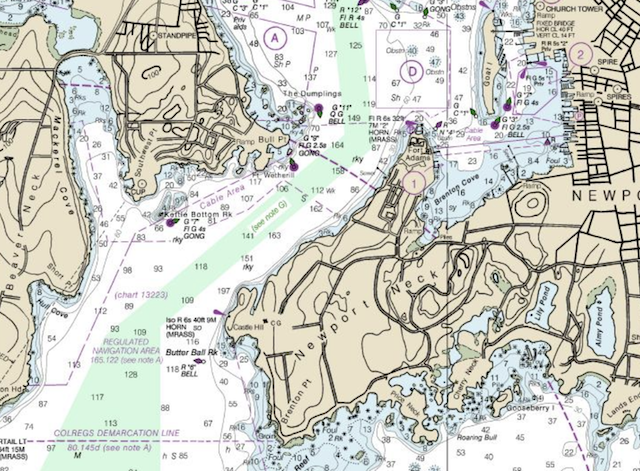 It took all night for us to sail the last few miles into the mouth of Narragansett Bay. We finally dropped anchor in Mackerel Cove, off Conanicut Island, just across from Newport, at 0505 hours on Thursday 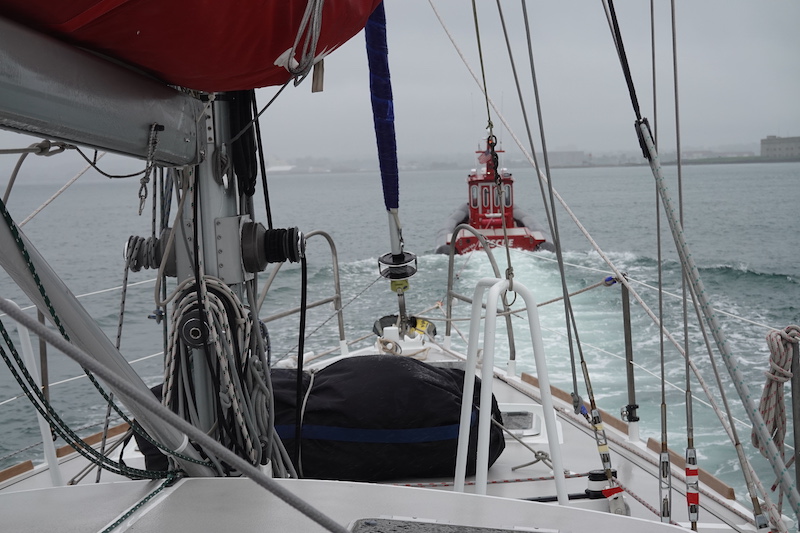 After sleeping a few hours we opened the raw-water pump on the engine and confirmed that several impeller vanes were torn off and missing. Then we called up TowBoat/US (I’m a longtime member) to organize a tow over to Newport and also started dialing up diesel mechanics. We hit paydirt when we soon hit on Phil Allen, of Corliss Diesel, who immediately volunteered to meet us on the beach in Mackerel Cove. We convinced him it made more sense to meet at the Newport Shipyard, where he has an office

Things happened pretty quickly once Phil boarded the boat at Newport Shipyard. He extracted the damaged impeller from the backward-facing raw-water pump in an instant (it took us at least half an hour last time we tried it), then had the pump off and advised it needed replacing. Indeed, this was the third time it had overheated (the first two times were due largely to user error) and now the cover was badly discolored and its interior surfaces looked quite worn. After calling around in search of a replacement part, Phil advised the quickest solution would be for me to drive up to Marblehead, MA, to retrieve a new pump from Hansen Marine, the nearest Nanni rep. I was pleasantly surprised to learn that Newport Shipyard could loan me a car for this purpose, and off I went on a multi-hour odyssey through the heart of Boston to the North Shore and back.

Alas, the pump I obtained from Hansen was not quite what we needed. There was a small discrepancy in the part number, and Steve, the parts guy at Hansen, had opined this was because this particular pump had been sold into the US rather than Europe. The two pumps, old and new, were mostly identical, but the drive-shafts designed to connect them to their respective engines were markedly different. 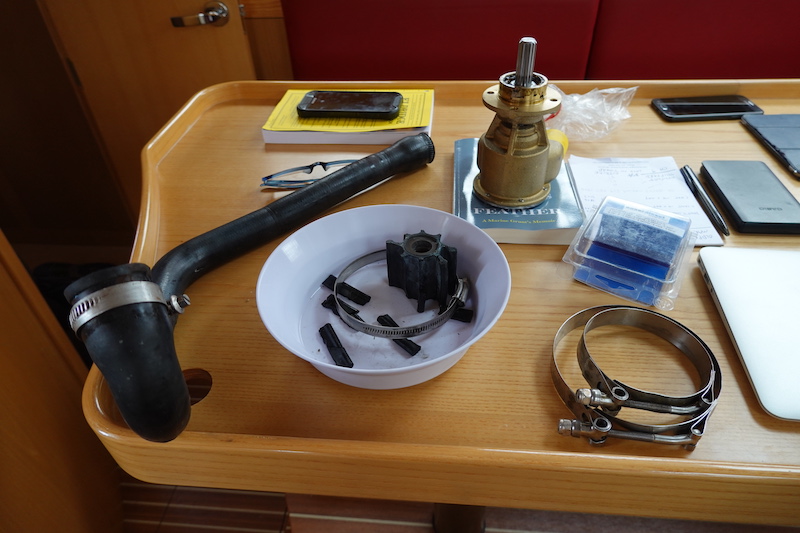 Bits and pieces on display. The new pump, which could not fit on our engine, is center upper right, atop the paperback book. The hose connecting the raw-water pump to the heat exchanger, emptied of impeller remnants, is left. The damaged impeller and associated debris rests in the white bowl 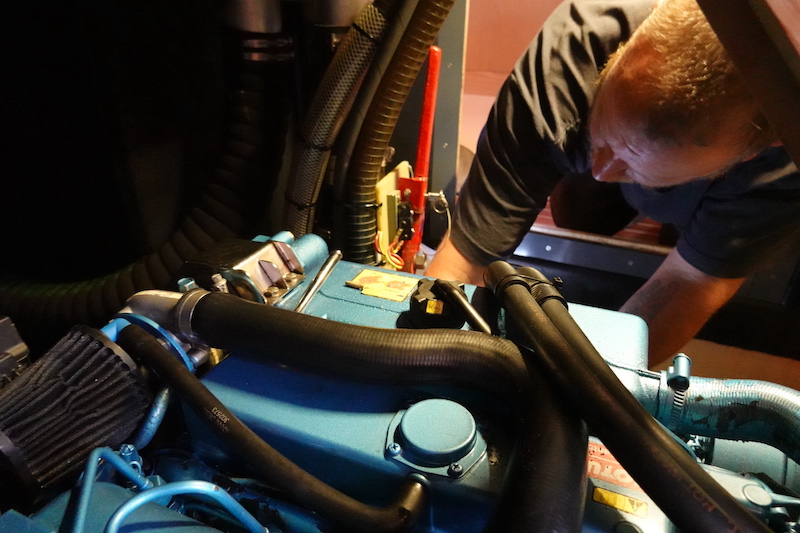 Phil’s man Brian chasing down stray impeller bits in the heat exchanger. He reinstalled the old raw-water pump with a new impeller and then, when we tried to start the engine, we found it was starved for fuel. Brian bled the fuel lines, quite ardently, and finally succeeded in starting the engine, but then we found the siphon break on the line between the heat exchanger and the exhaust elbow had failed and was spewing water all over everything

Now we had not one, but three problems with the engine. There was the compromised raw-water pump, with no part immediately available to replace it, and the failed siphon break, and we also soon found that we were unable to duplicate Brian’s feat of simply starting the engine.

In the face of all this, with some commitments at home soon to attend to, I decided to punt. With Phil’s help, we moved the boat to a mooring, and my brother Peter and I then evacuated the town, leaving Phil to cope with the engine. 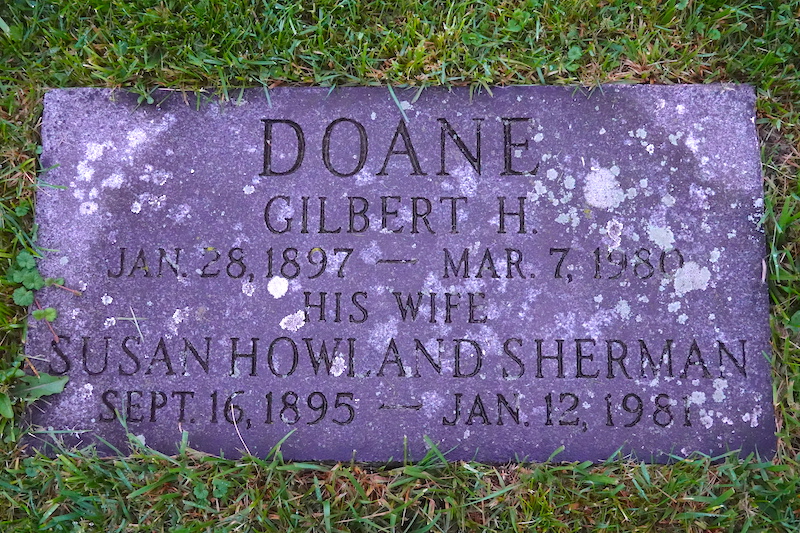 While we were docked at Newport Shipyard, Peter found time to roam the town a bit and set out in search of our grandparents’ (on our father’s side) final resting place. He found them in the nearby Island Cemetery and later led me to them 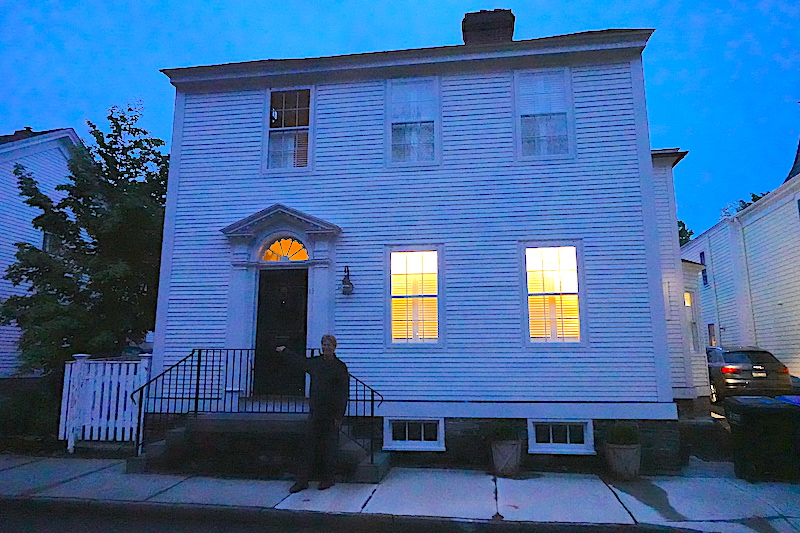 Afterward I led him to the house our grandparents had lived in at 13 Mount Vernon Street. I reminded him we were visiting here on July 20, 1969, and stayed up late with parents and grandparents to watch Neil Armstrong and Buzz Aldrin, on live television, set foot on the moon 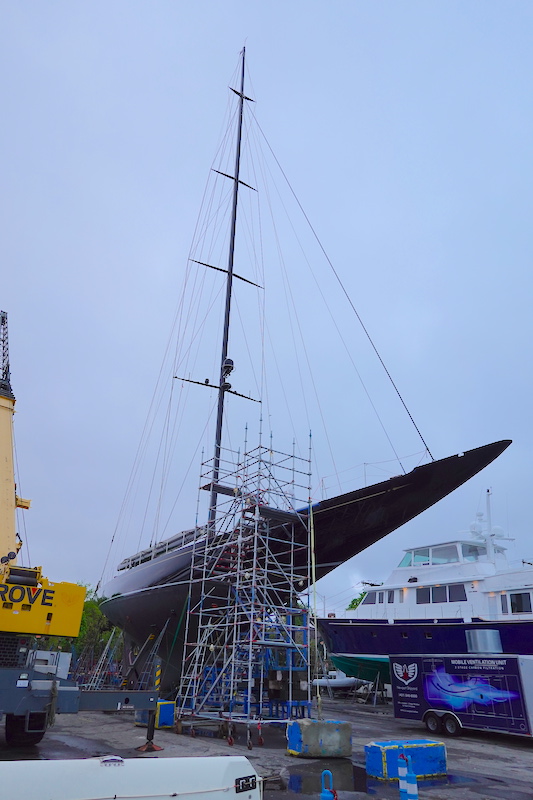 We also spent some time gawking at the high-end vessels that normally inhabit Newport Shipyard. Here’s the mighty J-boat Hanuman on the hard 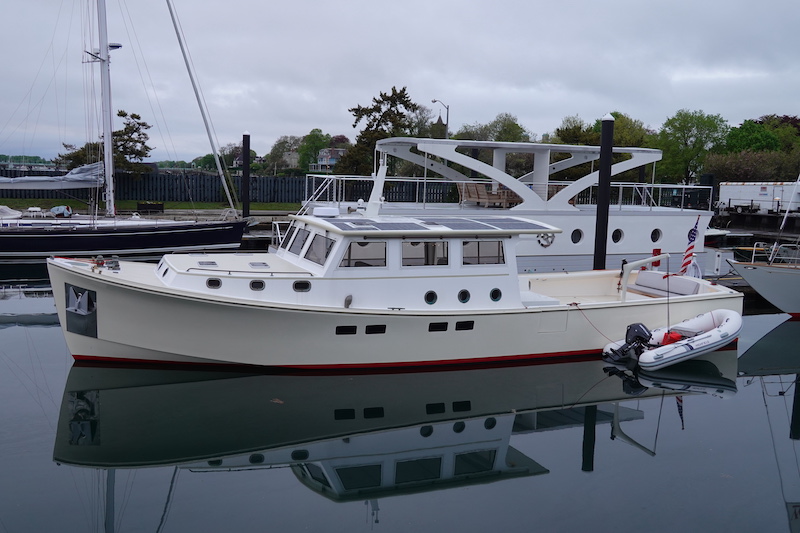 And a lobster yacht on steroids 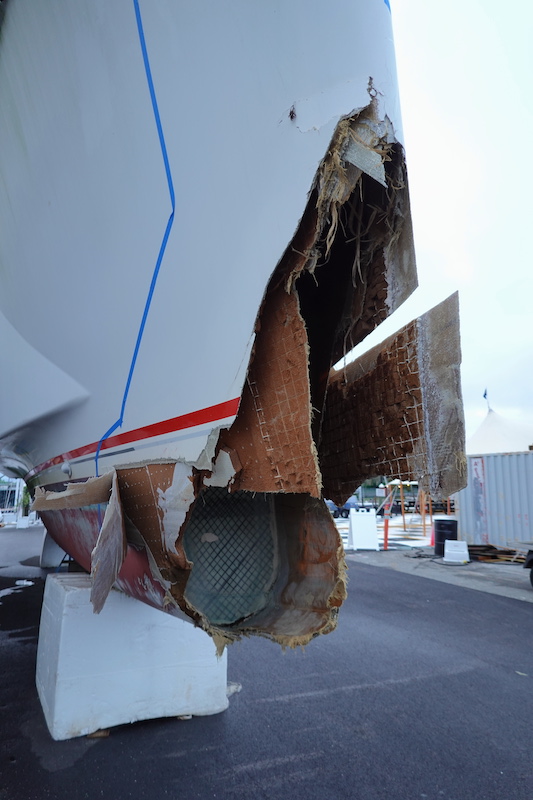 And a big Catana catamaran that suffered some serious hull damage

Phil did a great job coping with my engine problems in my absence. He quickly divined the siphon break had simply been fouled by a tiny piece of impeller debris that had made it all the way through the heat exchanger. He ordered a new raw-water pump, through Hansen, from the Nanni folks in France. He also scratched his head a good deal over the lack of fuel flow that was preventing the engine from starting. Finally, in a bit of intuitive genius, he realized it was the shutdown solenoid switch that was strangling things and so disabled this.

Once he actually got the engine running again, Phil and I agreed it would probably be best for me to finish getting the boat up to its home mooring in Portland with the engine as is. I’d have to shut it down by hand, which was no big deal, and also keep my fingers crossed that the old raw-water pump would hang on for a few more hours. I arrived back in Newport on the evening of May 30, Memorial Day, and the next morning took off on my own as soon as the sun was up, determined to use the engine as little as possible.

I had fine sailing conditions, running off on a broad reach, then later going to a wing-and-wing set, all the way from the mouth of Narragansett Bay to about halfway up Buzzard’s Bay. Then, shortly after 1100 hours, came one of the most sudden windshifts I’ve ever experienced. In a matter of minutes the wind went from blowing about 16 knots out of the west to blowing a hard 30 out of the northeast. 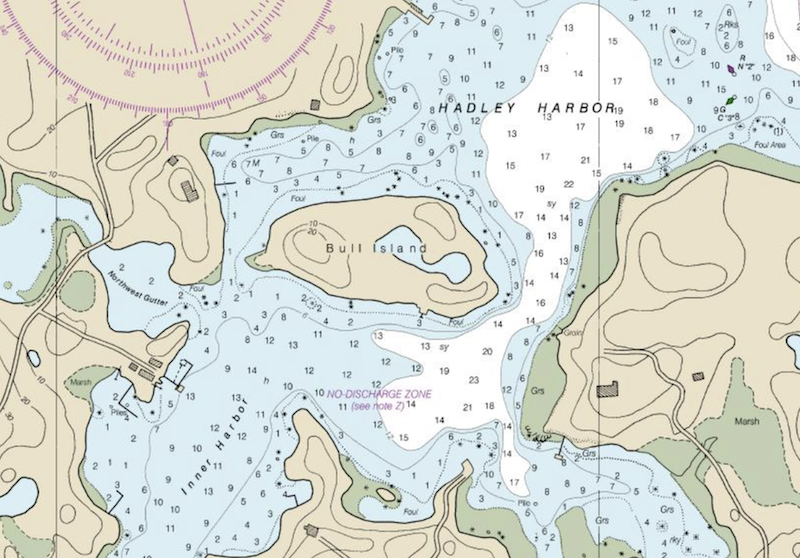 With both the wind and current now running hard against me, I elected not to try beating up to the Cape Cod Canal entrance and instead doused all sail and motored a short distance into Woods Hole, where I took shelter in Hadley Harbor’s well protected inner harbor 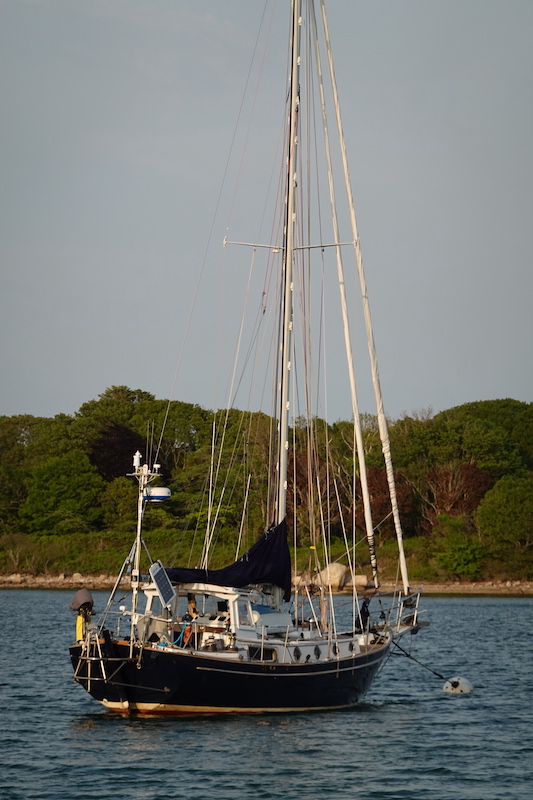 Also sheltering  there was this Kaiser Gale Force 34. Its owner and I recognized each other from time spent together on the dock at Jekyll Harbor Marina, pinned in place by a 30-knot westerly, back in mid-March 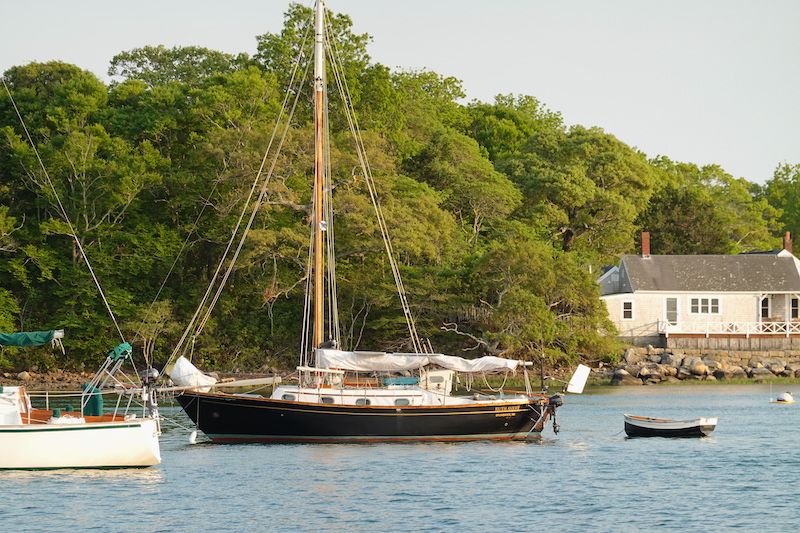 I also recognized this unique vessel, looking to be a Southern Cross 31 retrofitted with a gaff rig, which I’d seen anchored at the top of Quahog Bay off Harpswell in Maine over a decade earlier 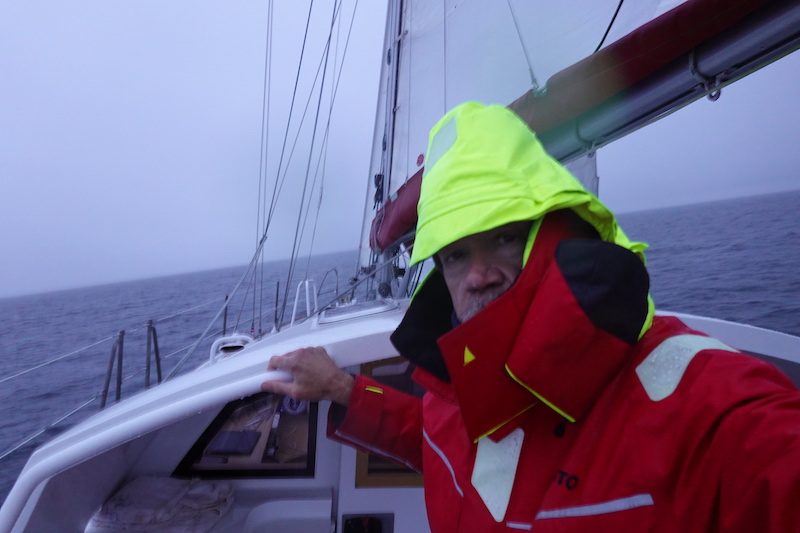 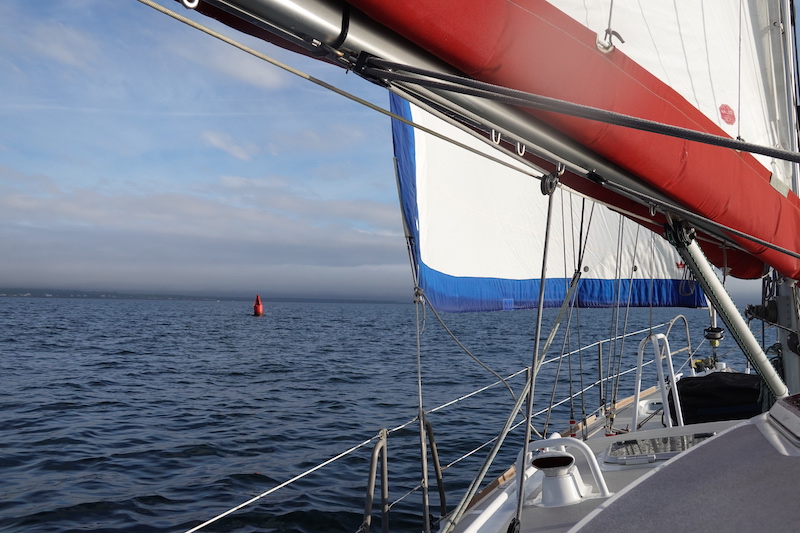 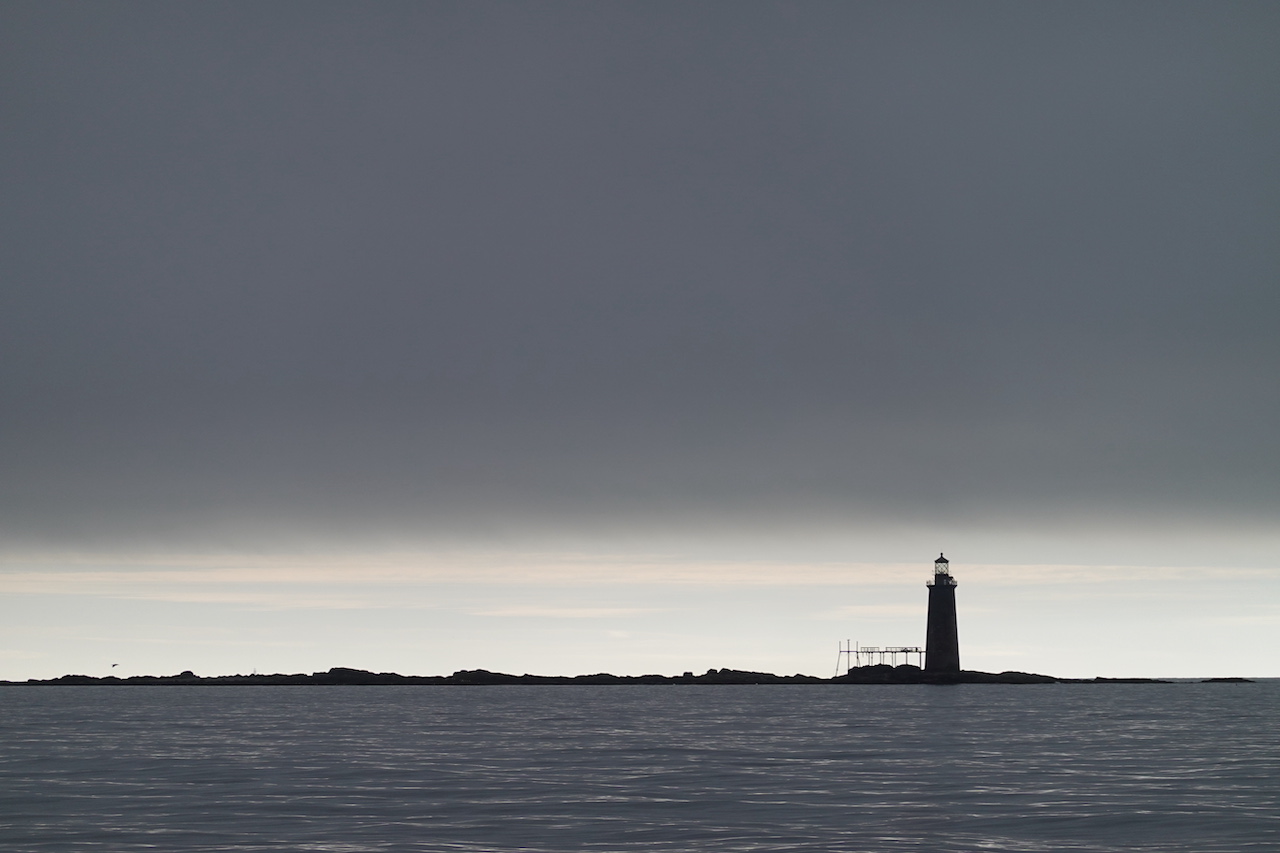 Then things just as suddenly got dark again as I passed the old lighthouse on Ram Island Ledge on way into Portland. By 0830 hours I was hanging on my mooring behind Maine Yacht Center, between the sewage treatment plant and the old baked bean factory

In the end I did have to run the engine a fair few hours, always with an eagle eye on the temperature gauge. The raw-water pump did leak a wee bit of oil. I was relieved, on checking the oil, to find there was no seawater leaking the other way into the crankcase. My conclusion in the end, based on a theory originally posited by Phil Allen, is that the engine had overheated the first time after perhaps a single vane tore off the raw-water impeller and clogged the route into the heat exchanger. It shifted position and unclogged things for a bit after we shut down and restarted, allowing us that couple of hours of run time before more vanes came loose and clogged things up again next time we started the engine.

But who knows? Quite clearly, however, the fouled prop theory was nothing but wishful thinking.

A replacement pump from France (the right one this time, hopefully) is due to arrive at Corliss Diesel tomorrow. Phil has promised to send it on to MYC directly and maybe, just maybe, it will be installed by the end of the week.

A big shut-out to Phil and Tito and Brian for all their help in sorting this out!