May 9/2022:  One of the very cool things about my recent solo jaunt aboard Lunacy northward from Hilton Head up to New Jersey was getting to see four bright planets lined up diagonally near the moon on each clear night. This photo shows only three of them—Jupiter, Venus, and Mars (from left to right)—as the lens on my camera wasn’t wide enough to catch the fourth, Saturn, and the horizon too. This alignment is actually only a prelude to what we can look forward to this coming summer, starting in mid-June, when all five of the visible planets, including Mercury, will parade across the sky in formation.

The photo was taken in the early pre-sunrise hours of Tuesday, April 26, as I was sneaking past a huge raft of anchored ships off Charleston, South Carolina, under a wing-and-wing set of sail.

I had departed Hilton Head in the early afternoon the previous day and enjoyed fine sailing conditions after getting clear of the shoals south of Calibogue Sound. I started out close reaching on starboard tack in a firm southeast breeze, and as the wind veered southerly, then to west of south, this devolved into first a broad reach, then a near dead-downwind run, first on starboard tack, then on port. I held this all through that Tuesday, in conditions varying from lighter to stronger, and finally decided to pull into Winyah Bay early that evening, as I divined from the weather radio (poorly received, thanks to my still upside-down radio antennae) that the wind would soon shift north and perhaps spit thunderstorms at me.

I had a great time sailing the nine miles up the bay on a fair flood tide to Georgetown, a most hospitable town, and soon after I anchored there the thunder squalls did come. Three other boats that came in right after me and anchored in the same vicinity all dragged their hooks in the mad blasts of cold air and madly scrambled to reset them. My anchor, thankfully, held firm, though I did spend some tense moments crouched in the companionway, dressed in full foulies with the motor ticking over, waiting to see what would happen. 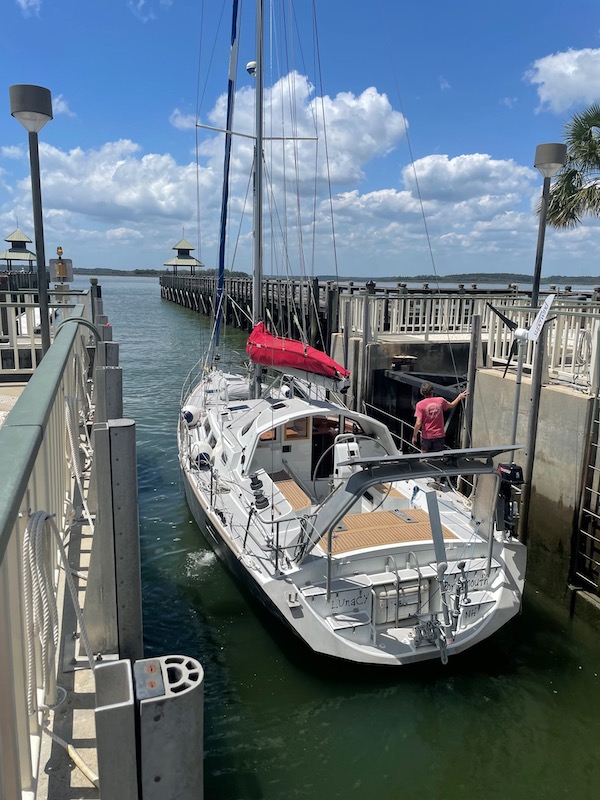 Locking out of the Windmill Harbour marina at Hilton Head. This time I managed not to lose anything overboard while doing so. Chris Brigham, a member of the South Carolina Yacht Club, which is based in the marina, snapped this photo for me after helping me get Lunacy out of her berth and down to the fuel dock, then to the lock entrance. He also had me over for dinner the night before and loaned me a car so I could do some provisioning. A great human being! I should also note again that my berth was provided by another SCYC member, Ted Arisaka, who is also a fantastic human being. Unfortunately, I had word just before heading down to Hilton Head that Ted’s boat was struck by lightning down in Florida! No one was injured, but evidently he lost his autopilot and a bunch of electronics 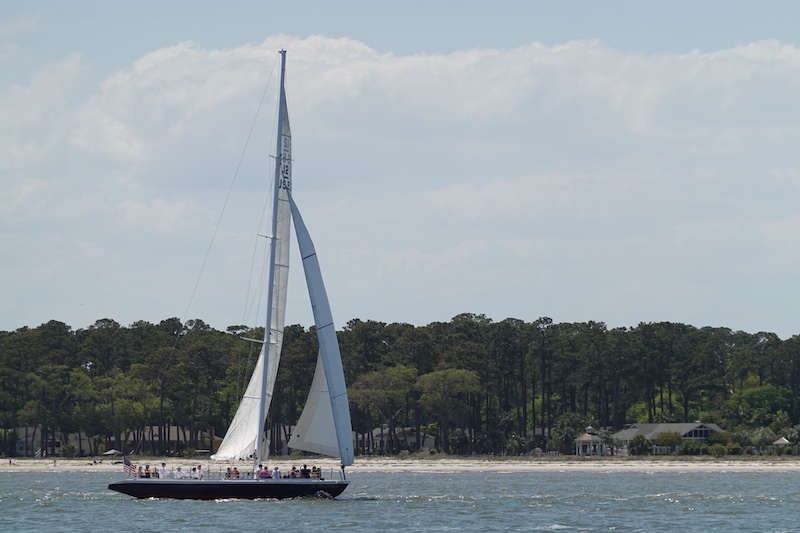 Seen on Calibogue Sound. Dennis Conner’s old 12-Meter Stars and Stripes, now earning her keep toting tourists on day trips out of the Harbour Town marina down at the south end of the island 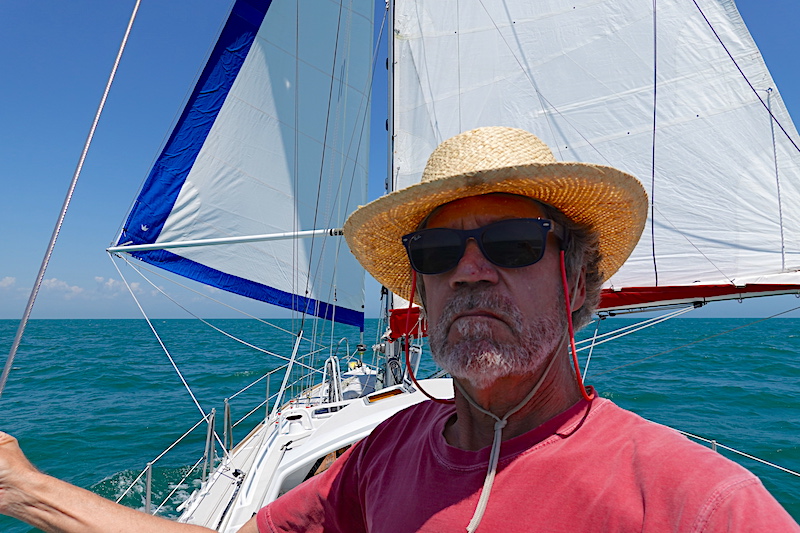 Our hero in a sun hat, north of Charleston 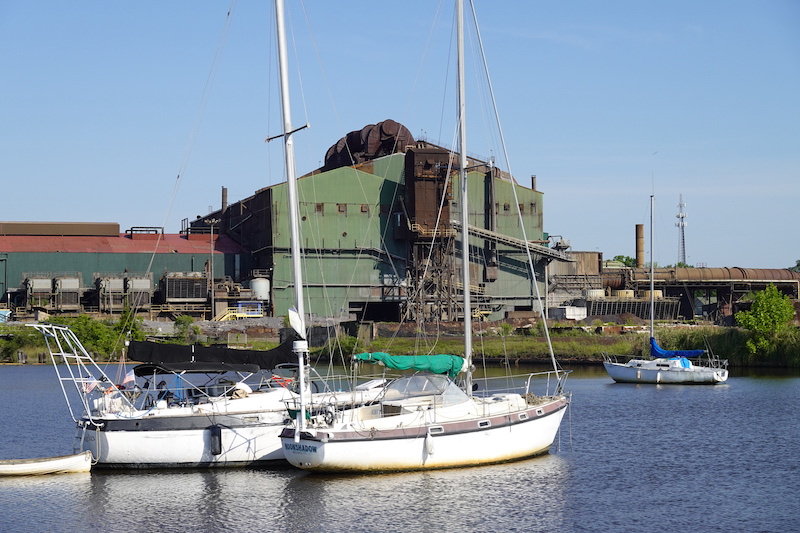 These were my closest neighbors at Georgetown. I spent some time talking with David, a friendly Colombian guy who lives on those two old Morgan Out Islands. He told me there was a plan afoot to tear down that old steel mill you see in the background and build high-end condos in its place. That boat in the background, as far as I could see, was unoccupied 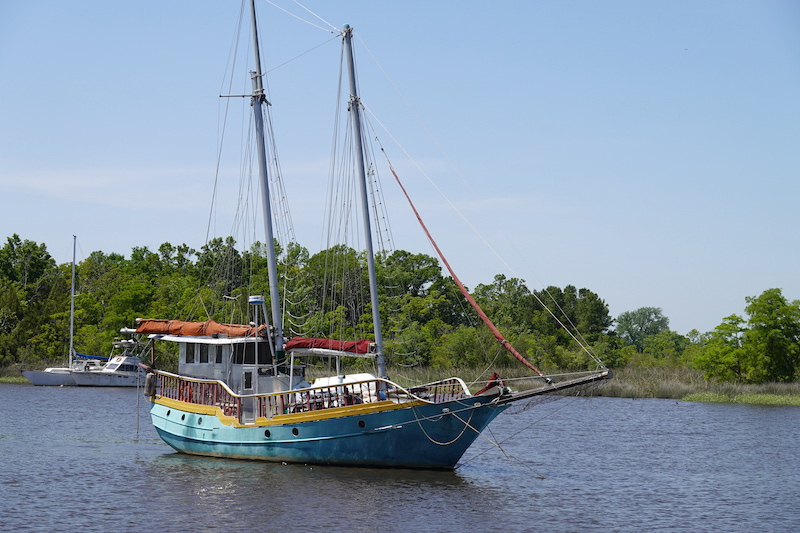 Also seen anchored in Georgetown: this super-funky schooner with a brand-new shiny aluminum pilothouse. I did not get a chance to meet its presumably funky inhabitants

I spent two nights and a full day in Georgetown, waiting for the north wind to tamp down, then left the following day around noon. I again had fair current to help me sail down the bay. I also had another boat, a 46-foot Catalina named Navigant, to keep me company. By the middle of that night, as I was sailing closehauled toward the end of Frying Pan Shoals, I was tired of having Navigant keep me company. They were so close at times, within a mile, I never felt I could catch any sleep. Fortunately we parted ways after clearing the shoals early the next morning. From Frying Pan I mostly motored up to Beaufort, North Carolina, arriving early in the evening. 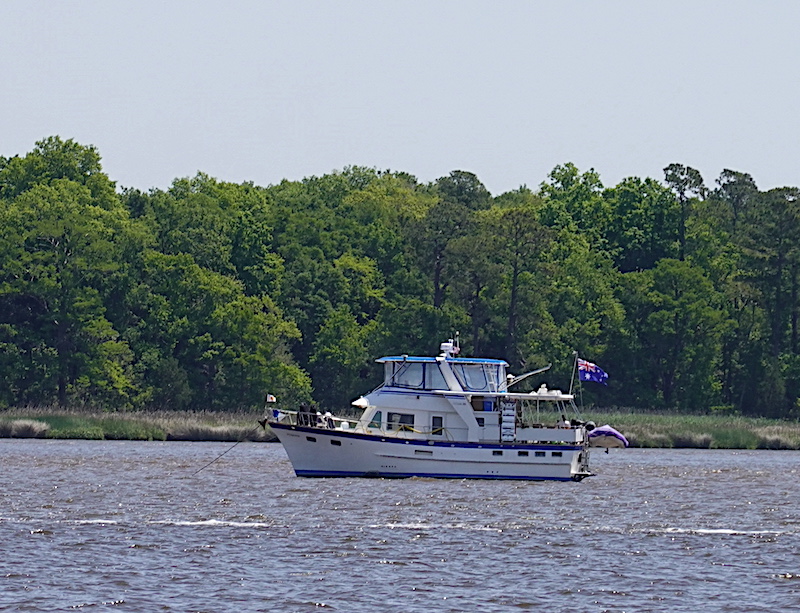 I was surprised to see this trawler yacht anchored out in Winyah Bay, flying an Australian ensign. Hard to believe they puttered all the way over from Oz in that thing 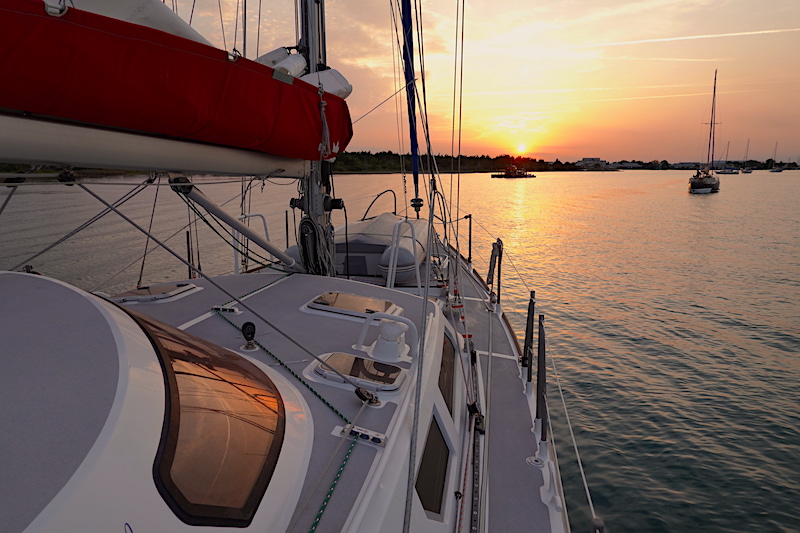 Anchored at Beaufort just before sunset. That barge you see planted well ahead of my bow had a huge dredging pump on it that was making a huge racket when I came in. Fortunately they shut down for the night as soon as I got my hook down 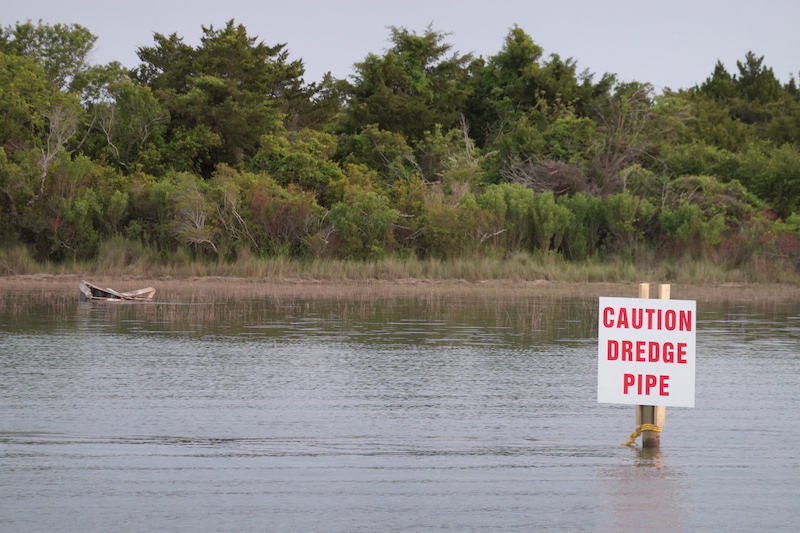 Last time I was in Beaufort you couldn’t anchor for all the moorings, and the time before that you couldn’t easily anchor or pick up a mooring for all the derelict boats. Now there are no derelicts and no moorings and they’re dredging the joint. Nice! 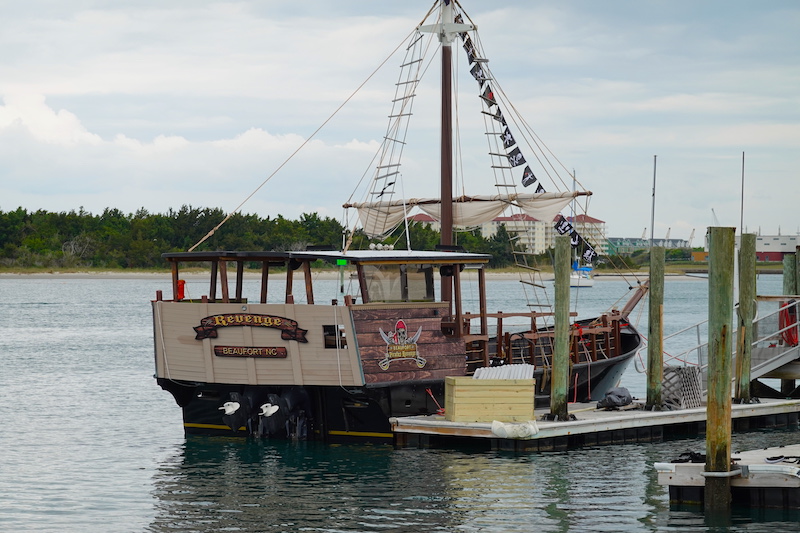 I will say this about Beaufort: there are many more kitschy tourist stores than there used to be. There’s also a kitschy “pirate” boat, with twin outboards no less, to take the tourists out drinking when they’re done shopping

I spent just one night at Beaufort, sleeping very hard through all of it, and took off again the following afternoon. Unfortunately, from there to Cape May I was mostly motoring, as the forecast for strong southerly wind turned out to be fallacious. 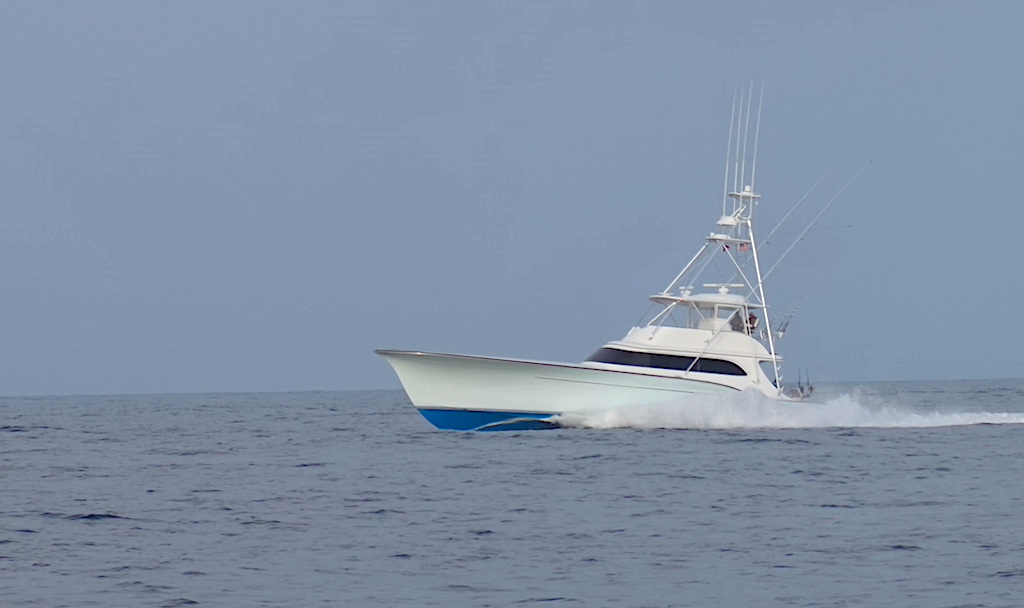 Approaching the end of Lookout Shoals in the early evening I saw a river of sportfishing boats heading in for Morehead City, Beaufort’s neighbor, after a day spent out fishing in the Gulf Stream. Morehead is a very popular sportfishing town because of its close proximity to the Stream 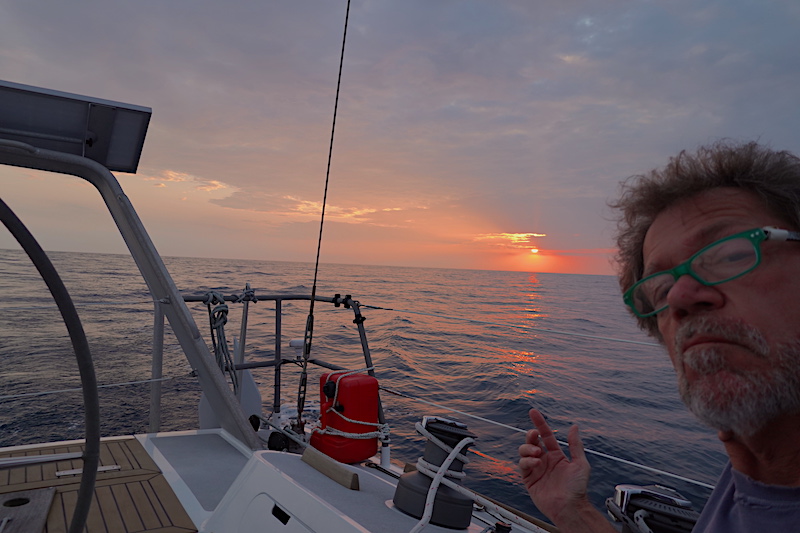 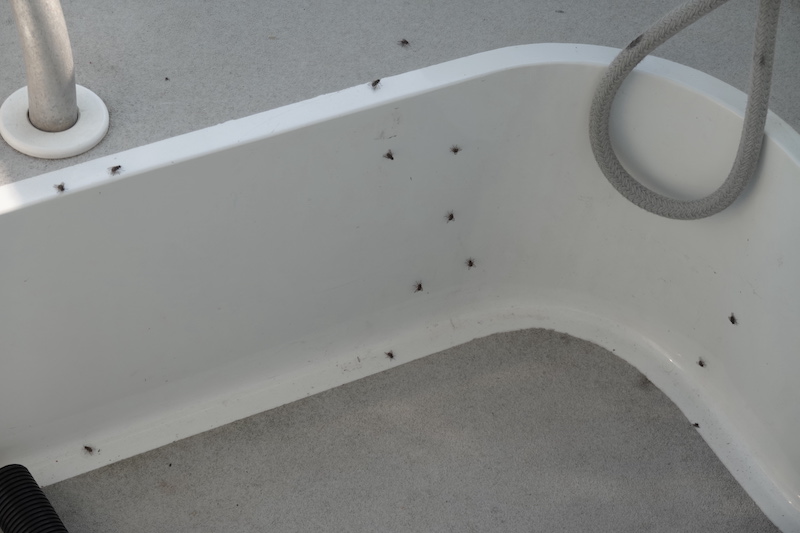 I rounded Cape Hatteras in calm conditions in the early morning of Sunday, May 1. That afternoon, despite being 30 miles from the nearest land, hundreds of flies descended on the boat. Then in the evening they disappeared. Where do they go??? Where do they come from??? What do they want from me??? Can anyone explain? The flies were very lethargic and easy to kill, and sometimes just died anyway, without me having to kill them. I did have to vacuum up all the dead bodies. The following morning the flies returned, but stayed only a few hours before disappearing again 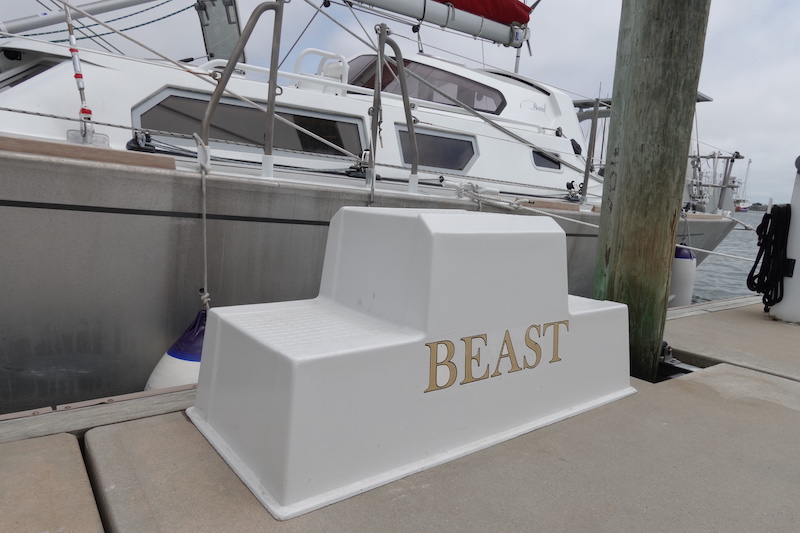 I arrived at Cape May on Monday night and happily settled down in the anchorage for a good night’s sleep. The following morning I puttered into the South Jersey Marina and tied up in a berth that normally belongs to a big sportfishing boat named Beast. They thoughtfully left their boarding stairs for me to use 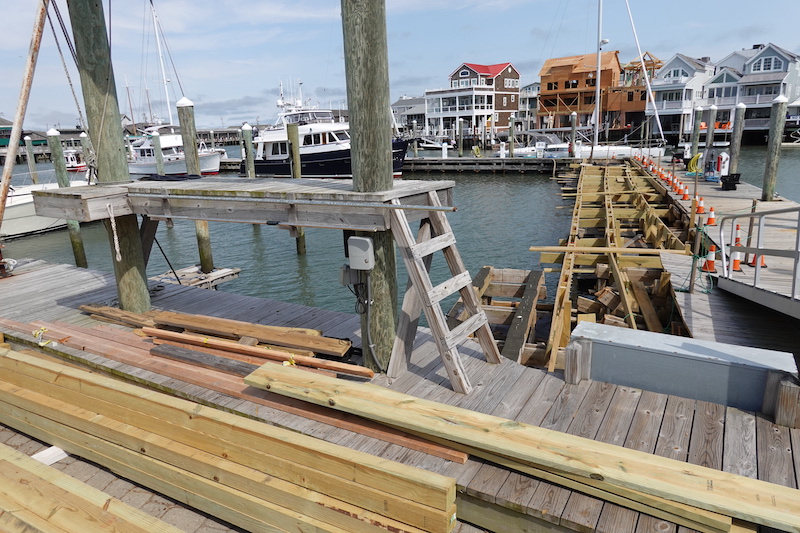 Heavy construction at the marina! They explained to me they are not allowed to replace their floating docks, but can only repair them. Which translates, as far as I can see, to rebuilding them in situ. An impressive project!

I’ve left the boat in Cape May to wait out this week’s fiesta of relentless gale-force northeasterly wind. Weather permitting, I’ll be back on the boat early next week and will continue trekking north.