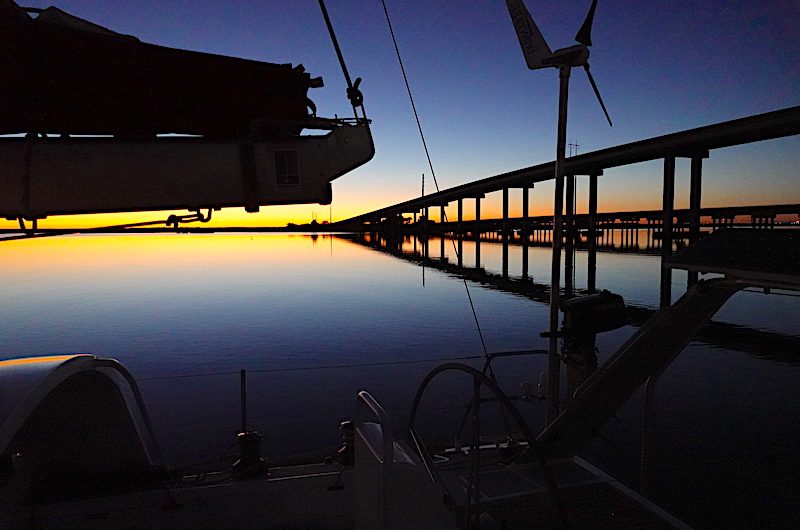 March 25/2022:  I returned to Beach Marine in Jacksonville Beach early this month to bring Lunacy along on the first step of her seasonal pilgrimage back north to New England. I arrived at the marina late on a Friday evening and on rising from my berth the next morning, I immediately noticed: 1) the boat was once again covered with grackle gwackle; 2) the toilet was again not functioning; 3) the trailer ramp just across from my marina berth was frantic with activity; and 4) the bottom was much fuzzier than it was a few weeks earlier.

The bottom fuzz was to be expected. I’d been impressed with how little growth appeared on the hull over the winter in Florida, but I had been warned things would quickly accelerate as the season changed to spring. Fortunately, I was able to buttonhole a local diver, Ryan Chandler, of Pier 88 Diving, who cheerfully arrived first thing Monday morning to mow the lawn for me. 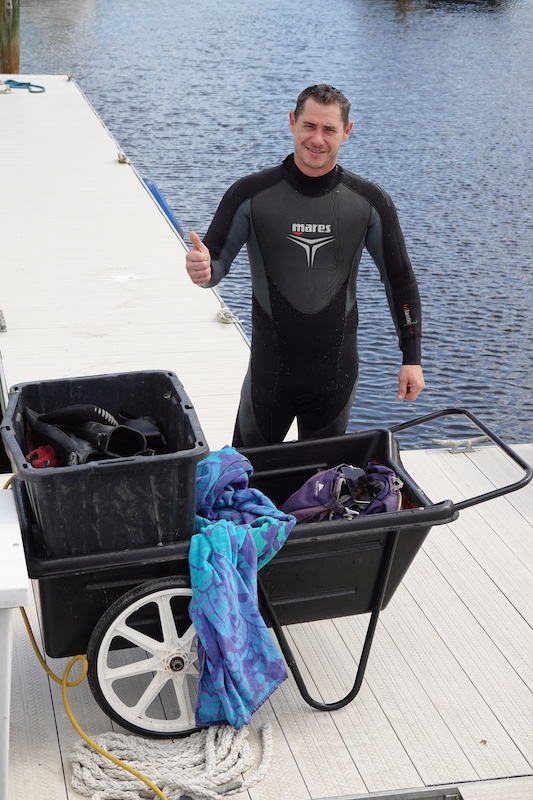 My man Ryan after he finished giving Lunacy a scrub. Definitely the man to call if you need a diver in Jacksonville Beach, St. Augustine, or Ponte Vedra. One reason he looks happy here is he and his wife just had their first child! 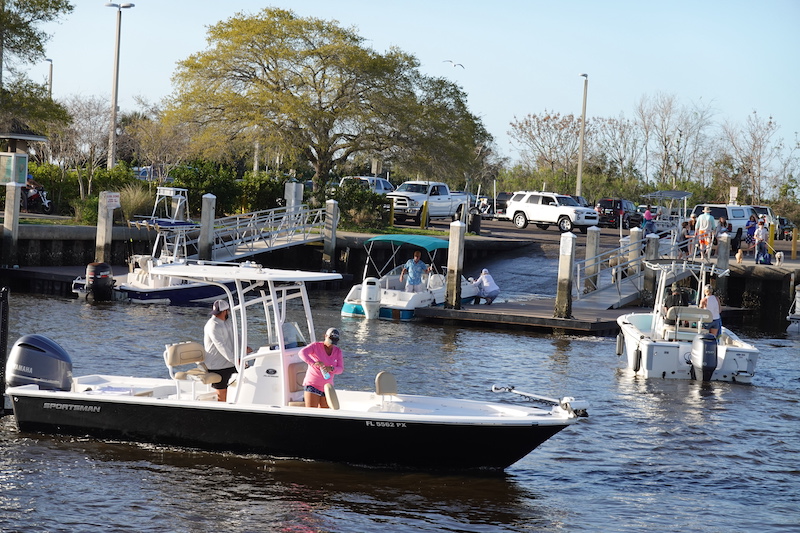 Mad scrum at the trailer ramp. This went on all weekend! Local marina residents told me they’d never seen it so busy

Fixing the gwackle problem was easy. All it took was a thorough blast with a dock hose, followed by vigilant shooing away of grackles thereafter. The toilet was another matter. After taking it apart a few times I finally divined there was a mysterious blockage in the intake line, at two different locations. I found weird mangled pieces of devolved black plastic that looked like they’d been chewed on. I have zero idea where they came from.

Having solved my immediate problems, I departed Beach Marine early Tuesday morning and motorsailed north, outside for a change, to Fernandina Beach, where Clare joined me the following day. 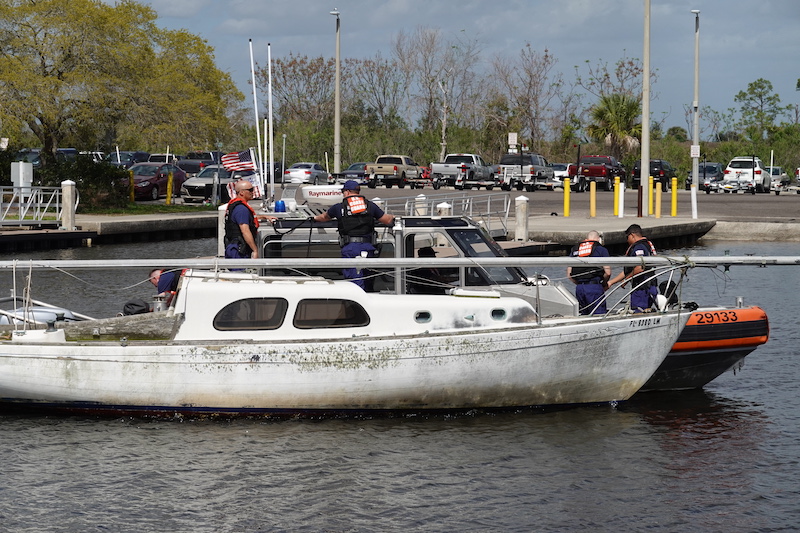 Coming into the marina, just as I was leaving, was this derelict boat that had been captured by the Coast Guard 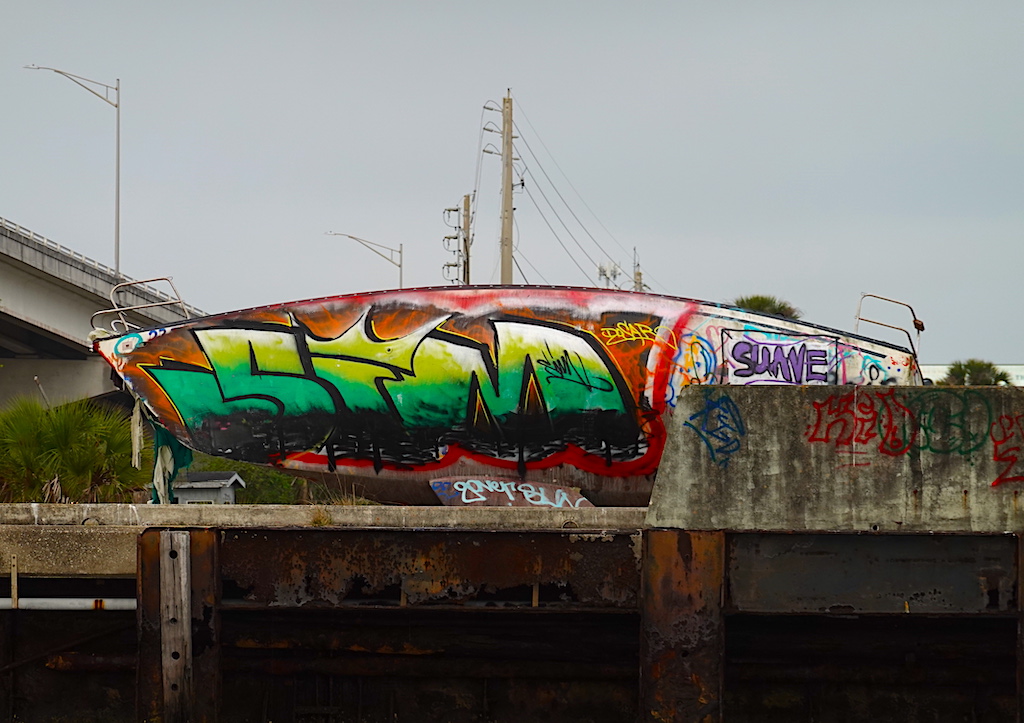 A festooned derelict, spotted on the shore of the ICW just north of Beach Marine 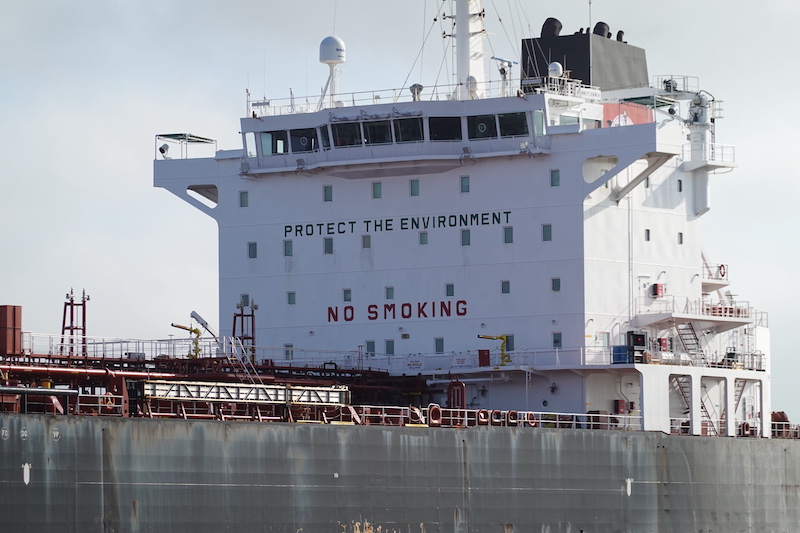 Ironic messaging seen on an inbound tanker as I was exiting the St. Johns River 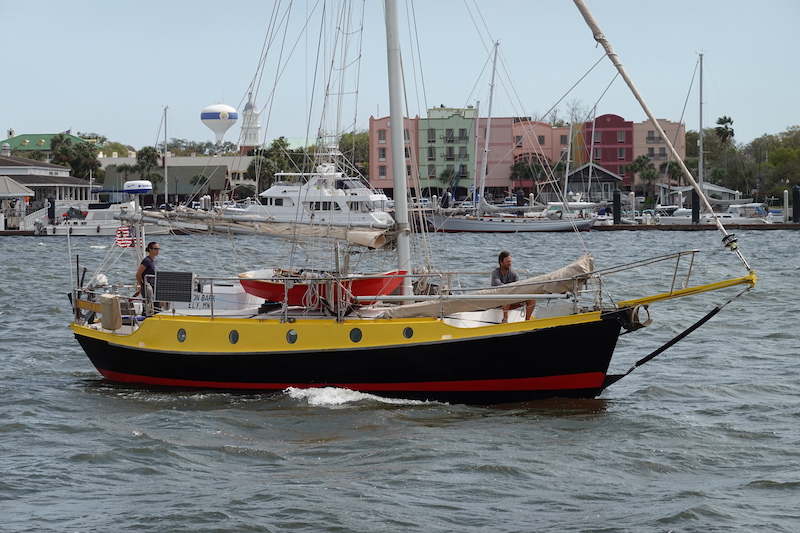 I picked up a mooring at Fernandina and soon was amazed to see this vessel coming in after me. The famous Iron Bark, a 35-foot Wylo II built in steel and cruised extensively by Trevor Robertson–the only boat to have wintered over unsupported in both the Arctic and Antarctic 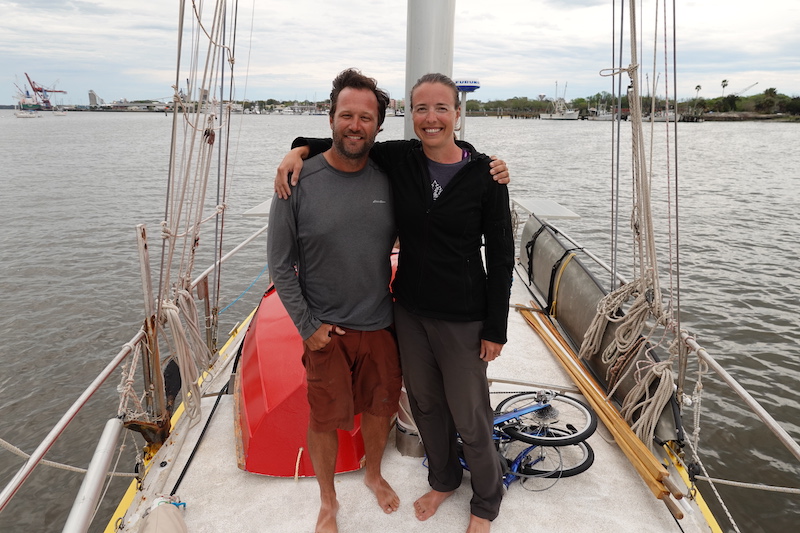 Only Trevor obviously wasn’t onboard. On investigating I discovered he had sold the boat just last year to this couple, Amy and Dave Freeman, from Ely, Minnesota. They were hailed as National Geographic’s Adventurers of the Year in 2014, after completing an epic 12,000-mile journey, hiking, dogsledding, and paddling across the breadth of North America. They got into cruising on sailboats after they noticed that people on sailboats looked much more comfortable than they were in their kayaks 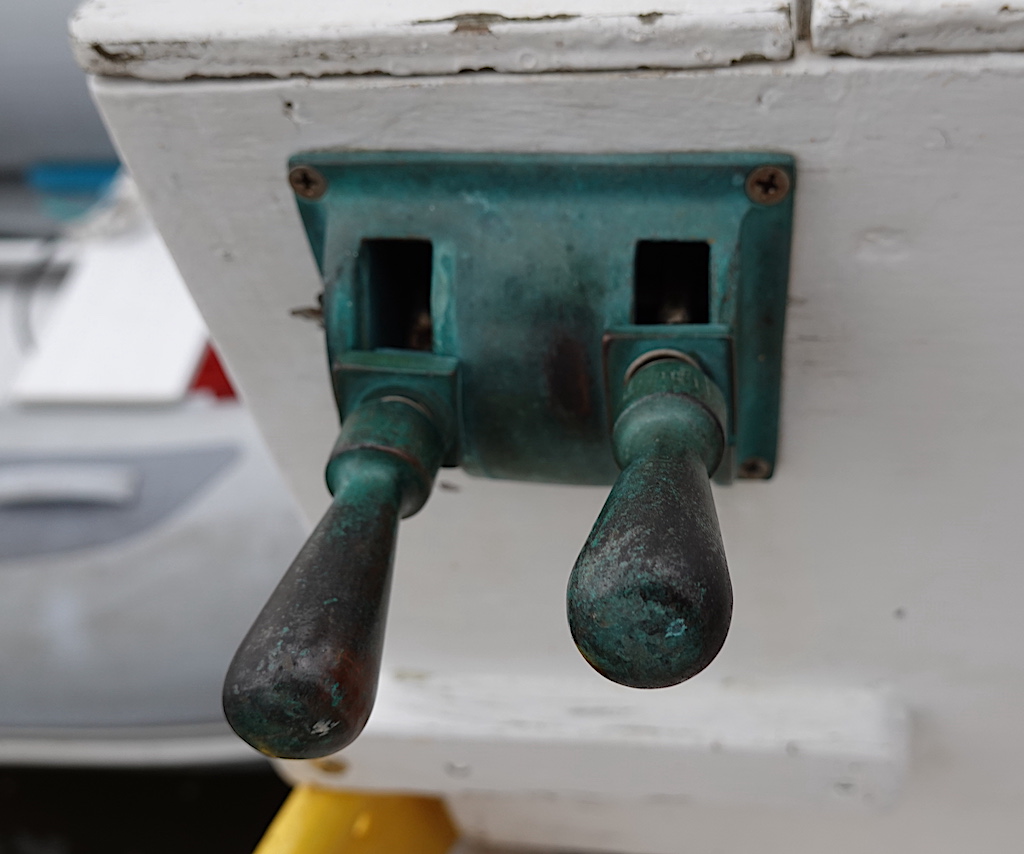 Engine controls on Iron Bark. In bronze! Anyone seen these before??? 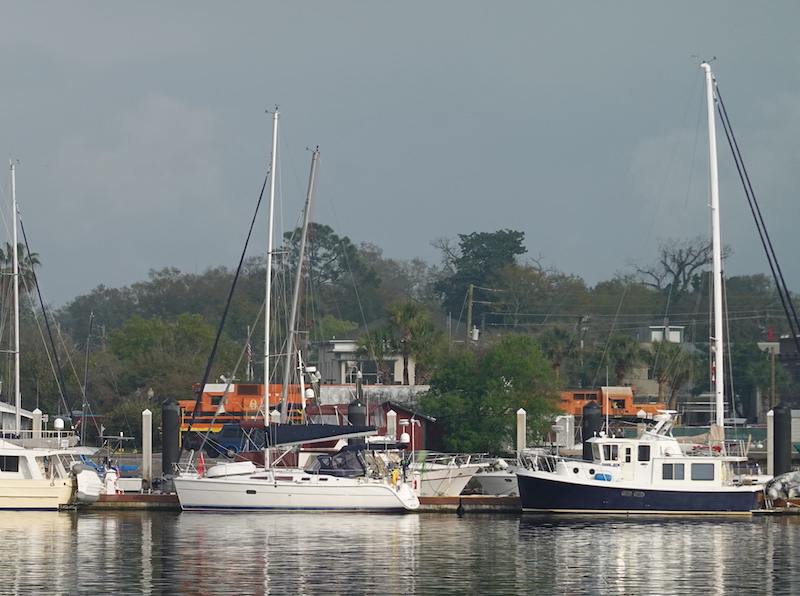 Only in Fernandina: a freight train running right alongside the marina 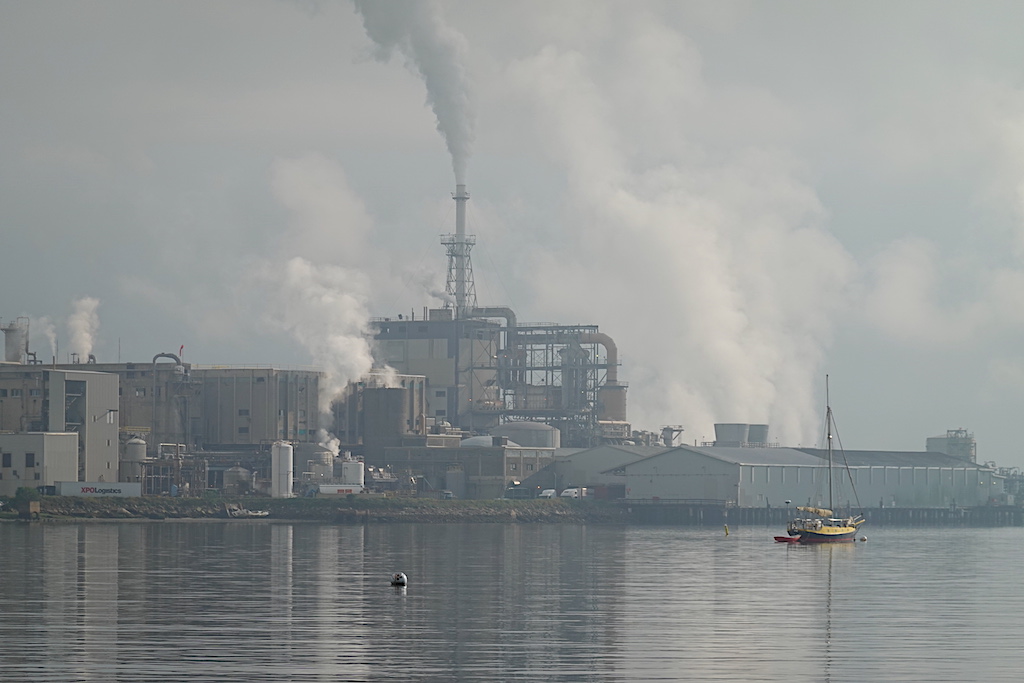 Iron Bark on her mooring, backed by a scenic paper mill

Clare and I had a fine time enjoying the fleshpots of Fernandina Beach. A superb dinner at España, an excellent Spanish and Portguguese restaurant I highly recommend. Some shopping at Pelindaba Lavender (more a girl thing than a guy thing). Plus some time at the Book Loft, a nice local bookstore, where–amazingly–we ran into the parents of Anthony Doerr, the bestselling author of All the Light We Cannot See and Cloud Cuckoo Land, who just happened to be vacationing in the area. 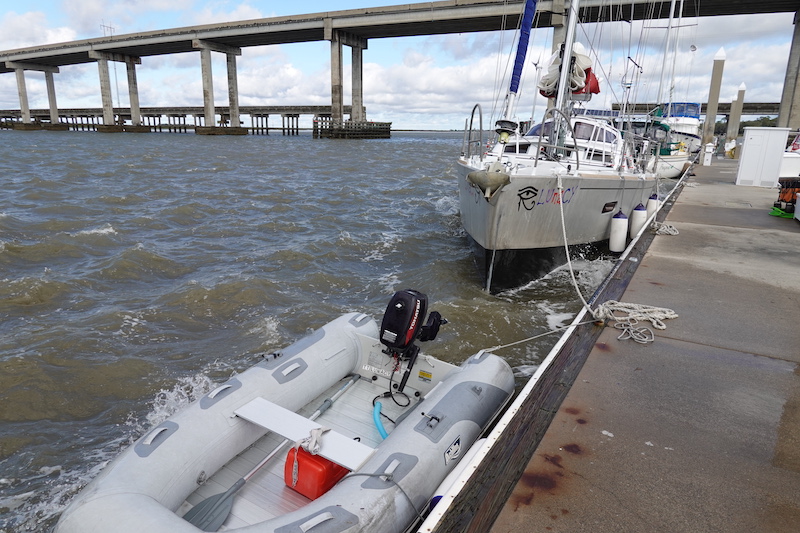 From Fernandina we carried on up the ICW to Jekyll Island, where a strong westerly wind, in excess of 30 knots, pinned us to the dock at the Jekyll Harbor Marina for a full day. This gave us a chance to explore the island in some detail on the marina’s loaner bikes 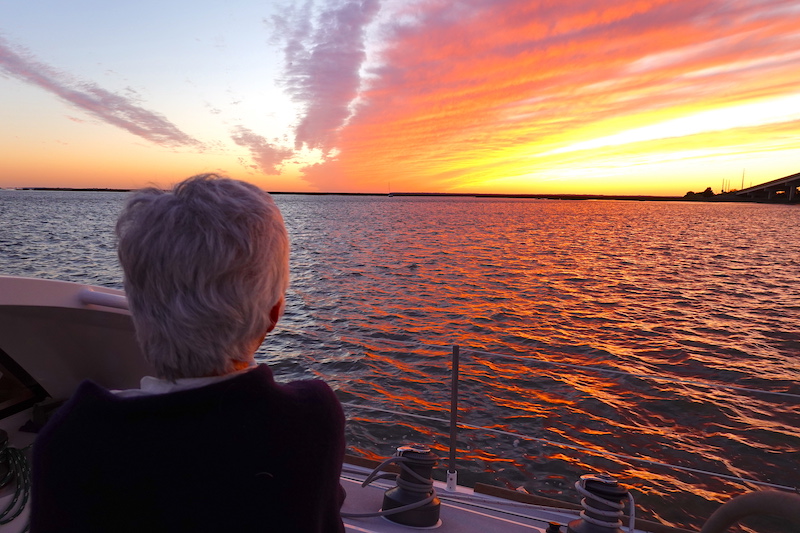 Clare admiring the sunset after the wind finally abated 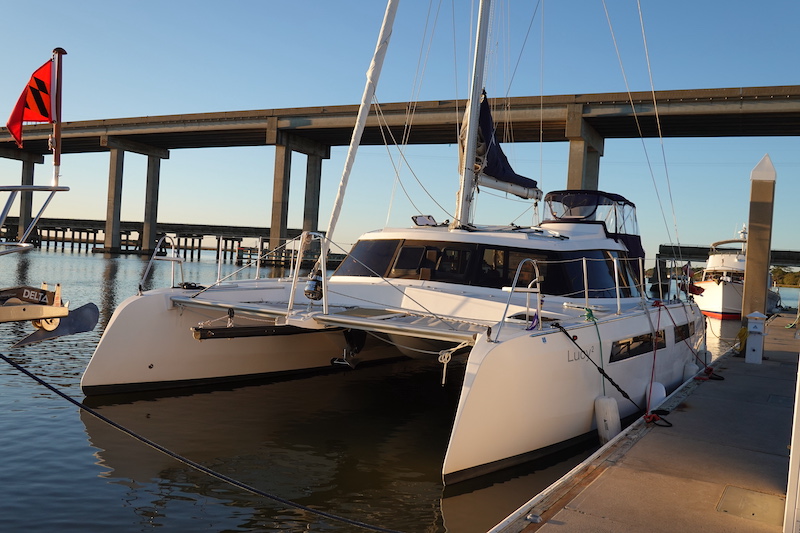 Also seen at Jekyll Island, on the dock not far behind us, an Alpha 42 catamaran, sistership to Be Good Too, the boat I abandoned via USCG helicopter some years ago. I’ve actually seen this boat Lucy2 twice before, once in Bermuda and once at Morehead City, North Carolina. She is Alpha 42 hull number two (Be Good Too was hull number one) 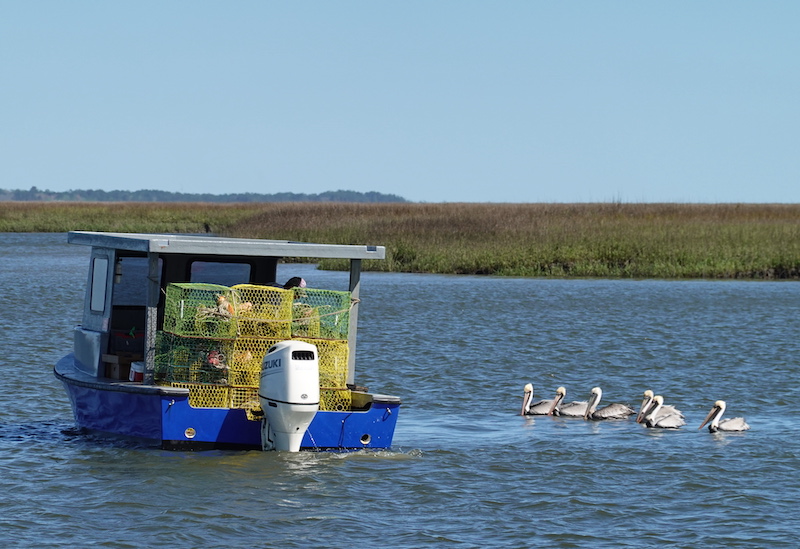 Clare had to leave me at Jekyll Island, as unlike me she has a real job. I carried on solo, motoring north up the ICW, and soon encountered this group of clever pelicans, who have trained this human to trap crabs for them 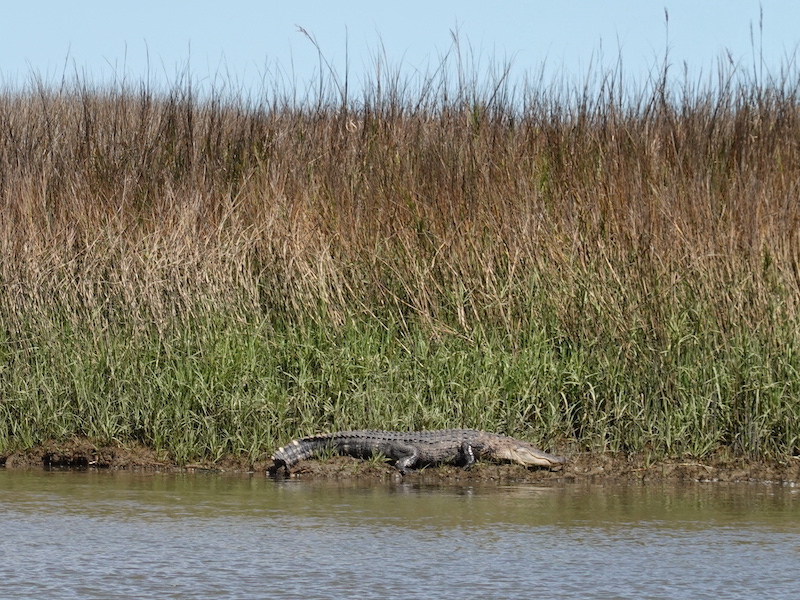 I also spied some alligators sunning themselves on shore 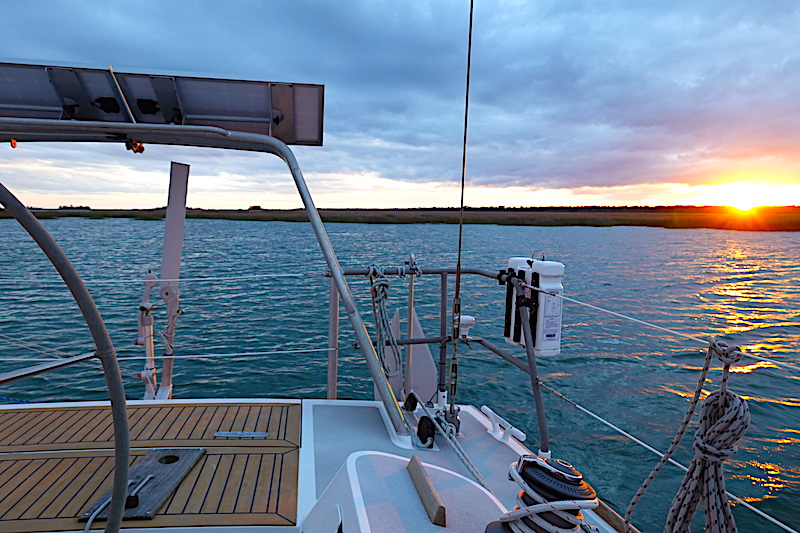 I anchored for the night in a small creek with the unusual name of Ridge River Mouth, off the Front River, just south of the Sapelo River 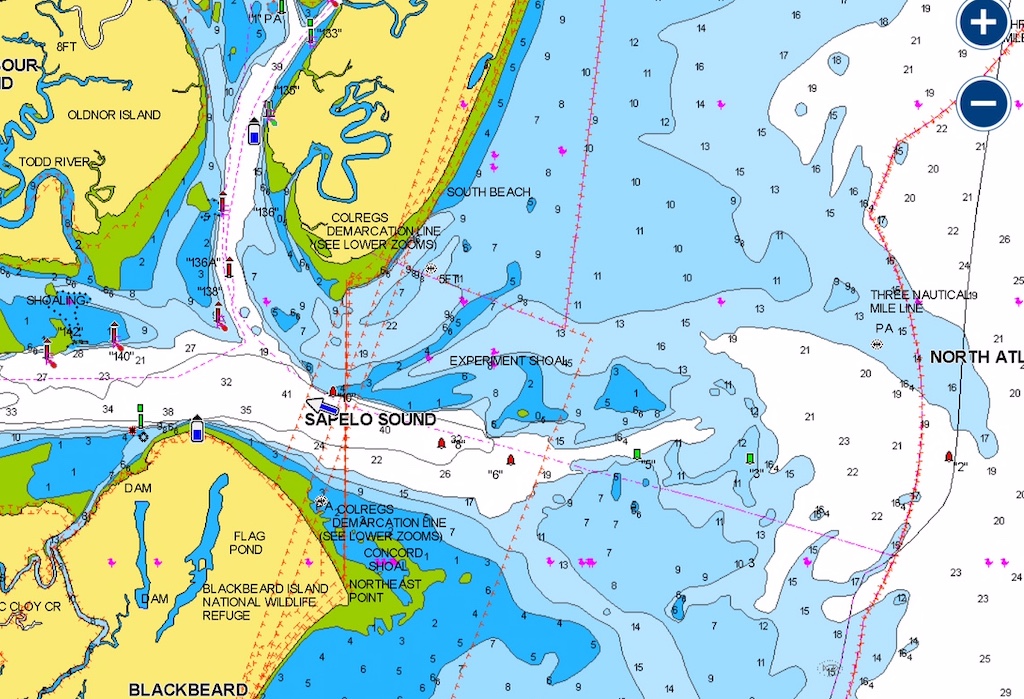 Next morning I ran out Sapelo Sound for open water and had an unnerving experience. The channel through the inlet bore no relationship to what was on the chart. Three buoys were missing, and Experiment Shoal has stretched out much further south than shown here. At one point my depthsounder suddenly started pinging away at less than five feet, and I was sure I would run aground. Fortunately, I had my board up and guessed correctly where the deep water must be (i.e., well south of the charted channel) 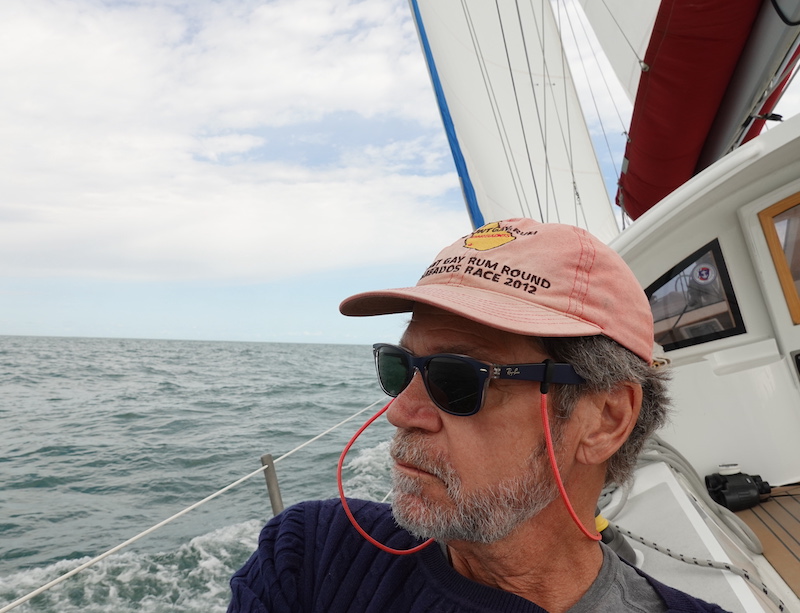 Once out of the sound I finally got to do some sailing! 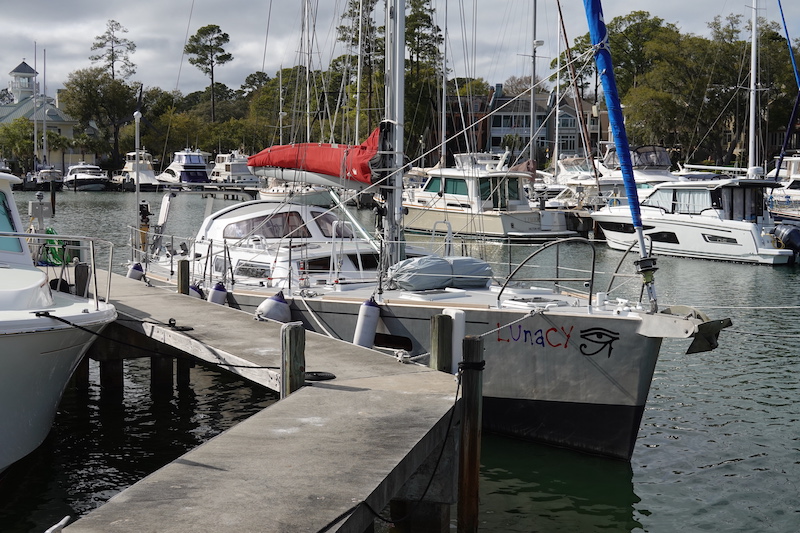 My ultimate destination was this berth here at Windmill Harbour Marina in Hilton Head, South Carolina, made available to me by a fabulous Facebook friend, Ted Arisaka, who I first got to know when writing about Georgia’s crazy anchoring regulations. Ted has worked tirelessly promoting boater’s rights and environmental issues all along the Georgia and Carolina coasts 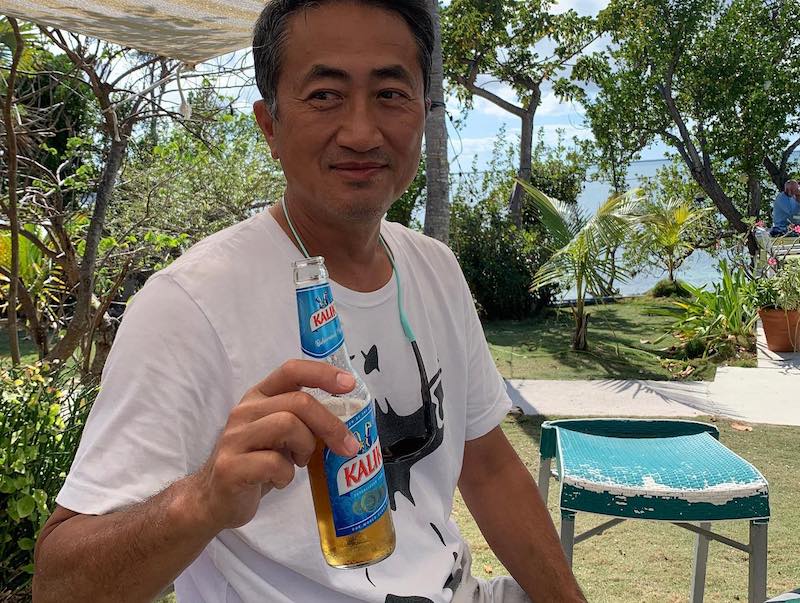 Ted currently doesn’t need his berth, because he’s busy drinking beer while cruising the Bahamas on his boat 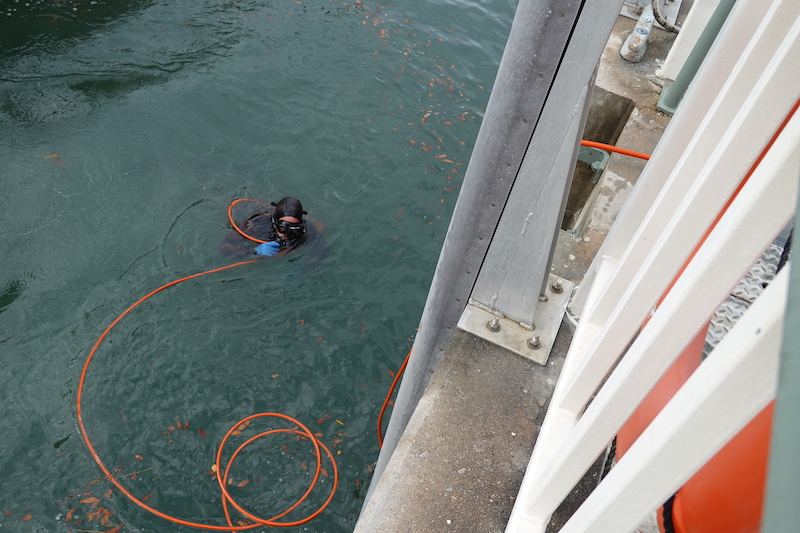 You’re wondering now about the other diver, aren’t you??? Well, I did have a little mishap entering Ted’s marina. Windmill Harbour is one of only three marinas in the U.S. that has an entry lock you have to pass through to get inside. While locking in, I managed to scrape my Man Overboard Module, hanging outboard on the stern pulpit, along the lock wall and it dropped overboard into the lock with a resounding kerplunk. Fortunately, it did not deploy itself! Also fortunately, the fabulous Alex of Coastal Diving happened to be on site cleaning hulls, and I was able to lure him into the lock to retrieve my lost gear 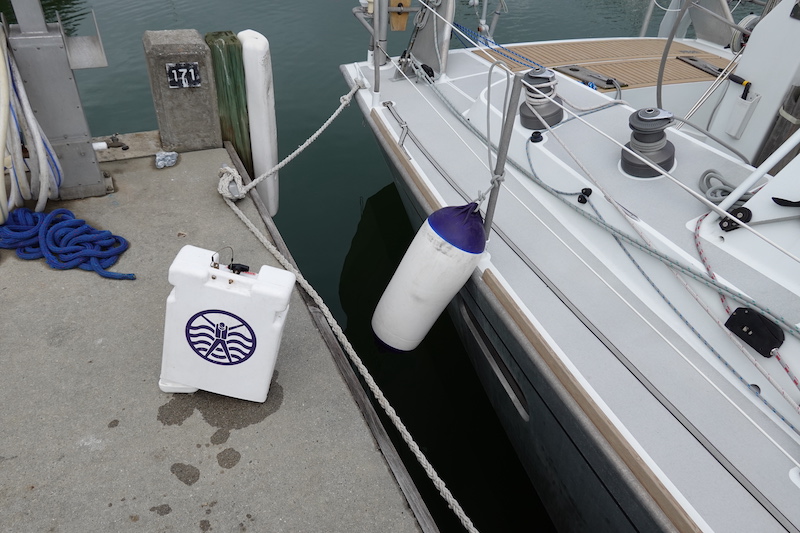 The MOM unit, looking a little bent but otherwise OK after being rescued by Alex 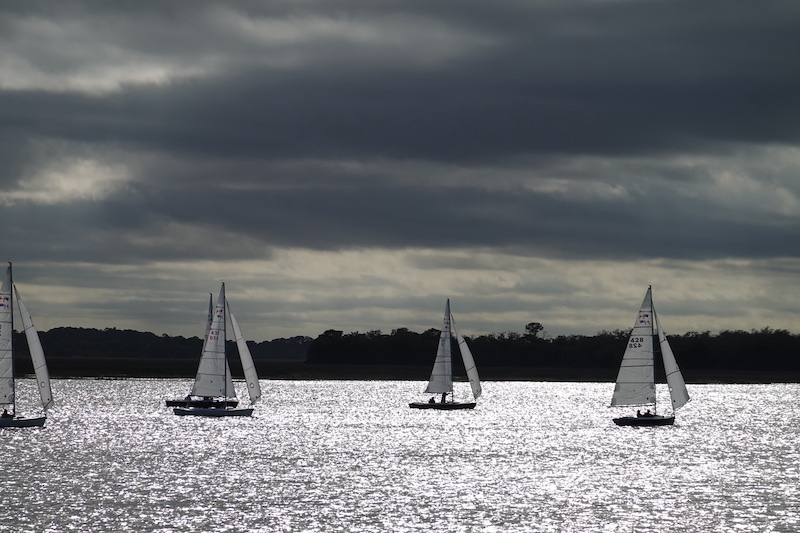 Thanks to Ted, I was well received by the South Carolina Yacht Club, which is located in the marina. This is their fleet of Harbor 20s out racing the evening after I arrived 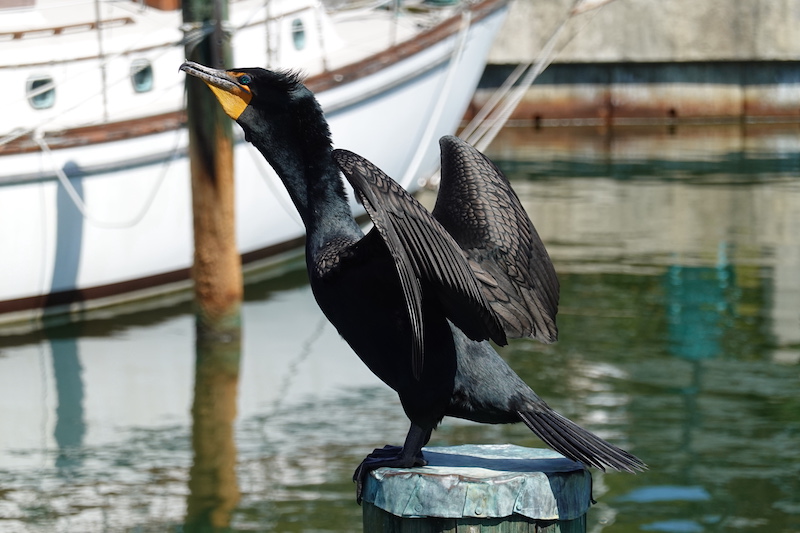 And this is the guy I left looking after the boat. He was perched on this piling off my port bow the whole two days I was there. Seems like a reliable character. Fortunately, cormorants have good manners and generally do not defecate on boats