March 23/2022:  As soon as I finished reading Chris Bowman’s excellent memoir about building boats in Bequia and sailing with Bob Dylan, I was inspired to revisit this book. It is a curious volume, part cruising memoir and part scholarly treatise. Its author, Douglas C. Pyle, arrived in the islands in 1968 aboard an old wooden sloop, Eider, built in England in 1939. He taught school for a while on St. Croix, then in 1970 took off on what he thought would be a summer season’s cruise before he returned to the States to resume his graduate studies. Instead, enraptured by the “ropey, make-do” traditional boats he encountered on different islands, he ended up cruising around for five years learning all he could about both the boats and the men who built them.

The focal point of Pyle’s technical research, and the raison d’etre of his wandering, was his practice of taking lines off boats that were out of the water, either in build or for maintenance. The book is filled with simple lines drawings of various types of boats, which may not seem so interesting if you’re not really into boat design, but each drawing has a tale behind it that evokes the islands, their people, and their history. If you are into boat design and have sailed much in the Caribbean, this book is a gold mine. Either way, it adds up to a unique portrait of the region in the years before tourism came to dominate the economies of the islands.

The most immersive part of the book takes place on Bequia, where Pyle succeeded in insinuating himself into the good graces of one Haakon Mitchell, then in midst of constructing a 45-foot sloop named Skywave. Pyle started by helping to haul raw timber out of the bush and eventually earned a proper place in the crew building the boat. It certainly didn’t hurt that he had some simple power tools and a portable generator at his command.

“Douggie is a magic man!” proclaimed one member of the Mitchell family once this fact became known.

“Man, you got tools you ain touch yet!” chimed in another. 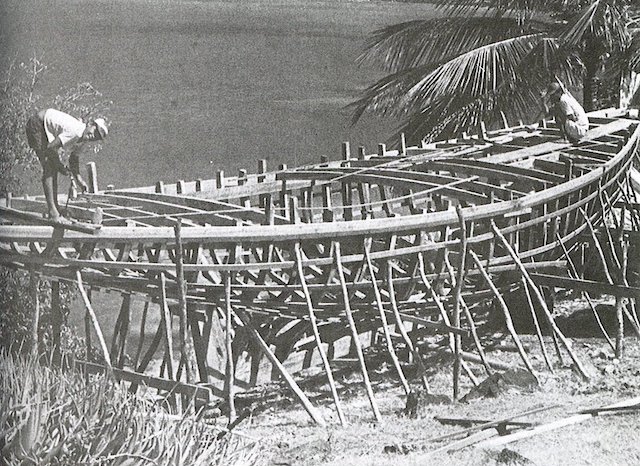 Skywave in frames in January 1971. As with all the boats described in the book, she was built by eye with no plan 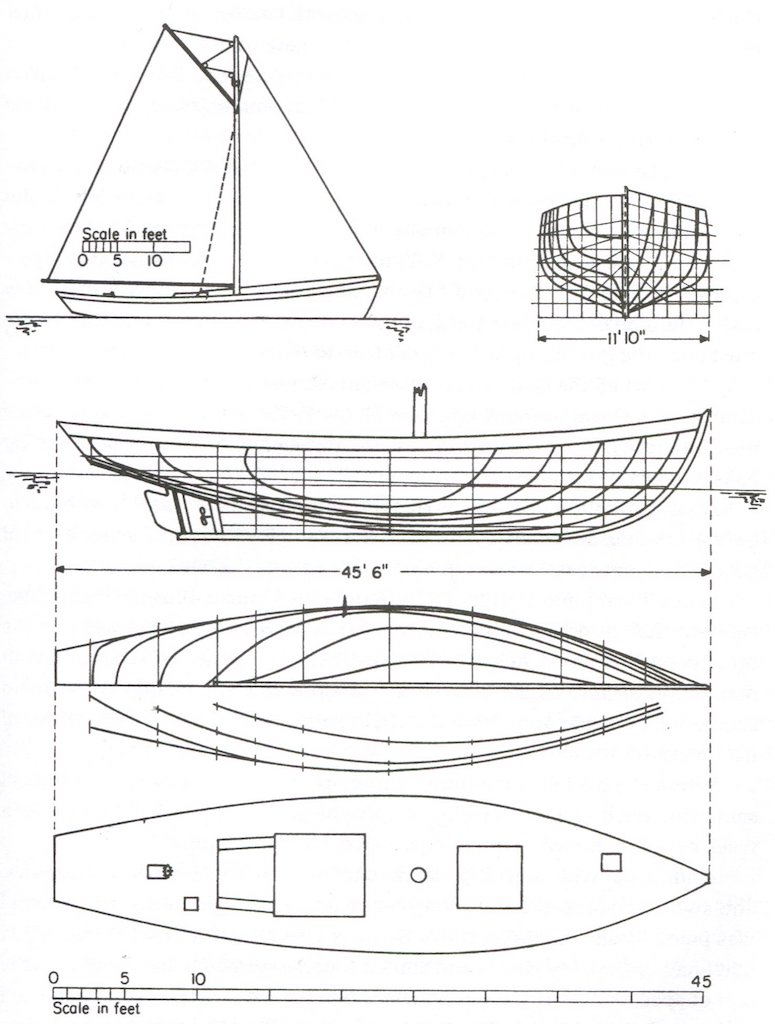 Lines of Skywave, as rendered by Pyle 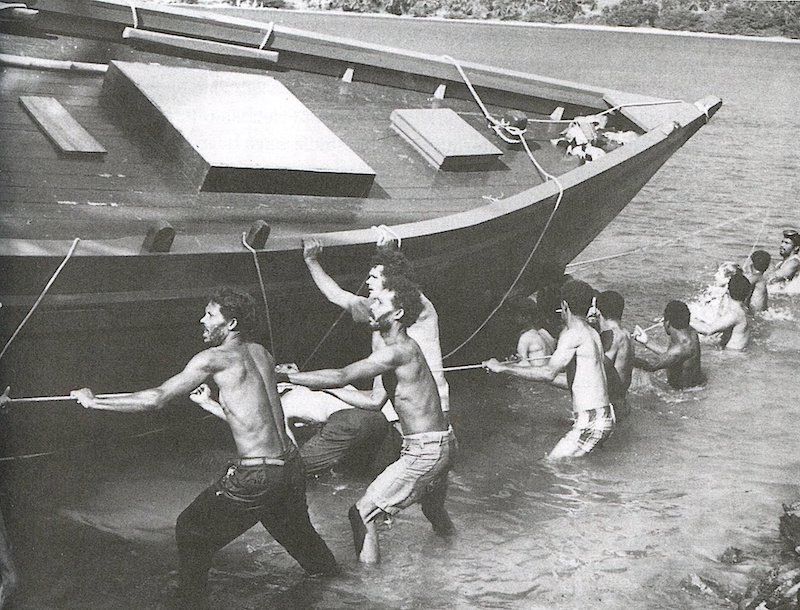 Pyle’s work on Skywave led to another unique opportunity, a spot crewing on a whaleboat with Athneal Oliverre, the island’s top harpooneer. (Oliverre later played an important role in helping Chris Bowman launch Bob Dylan’s schooner.) To find his prey Oliverre posted look-outs on different hills in the area, and when one of these spotted a whale spouting they would “cut glass” and shine a mirror to signal the boat crews waiting on shore. Following a hard scramble to get underway, the boats would head out in hot pursuit under sail. Pyle describes the whole process in compelling detail–the chase, the kill, the trying out of the oil on shore, and the sharing of the meat with the general populace. 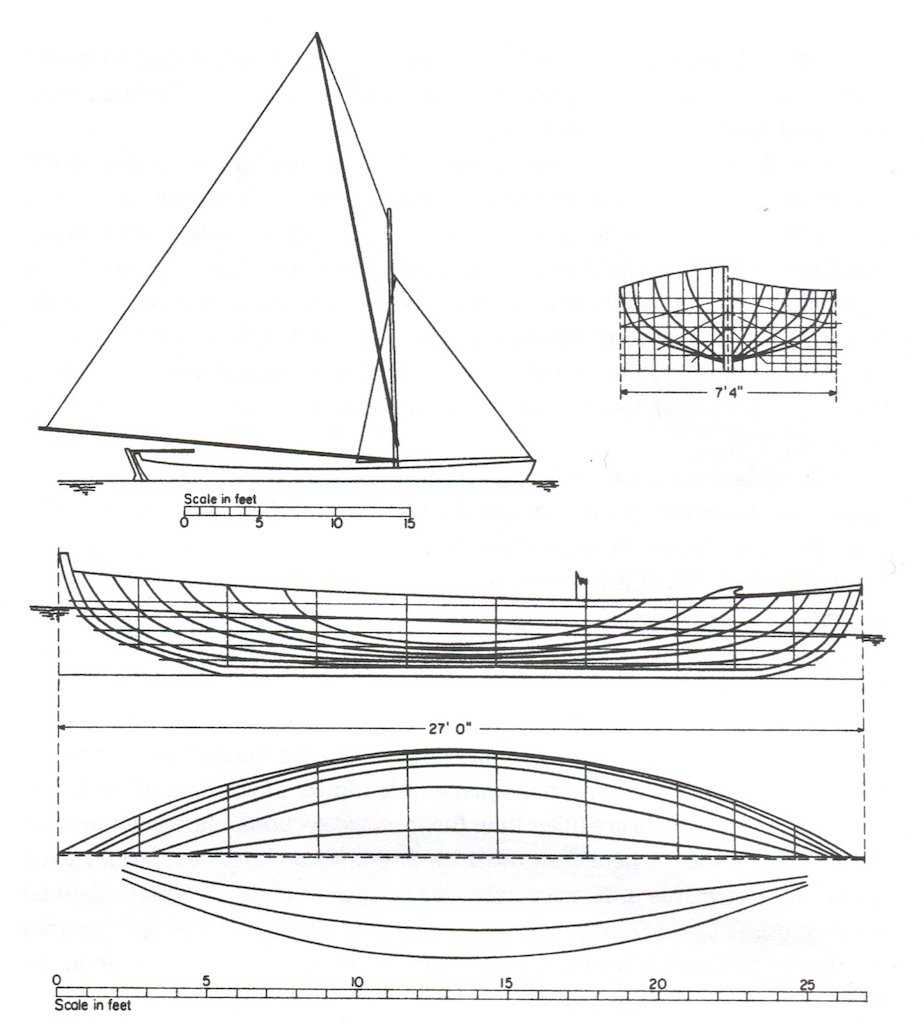 Lines of the whaleboat Dart, built by Athneal Olliverre in 1955 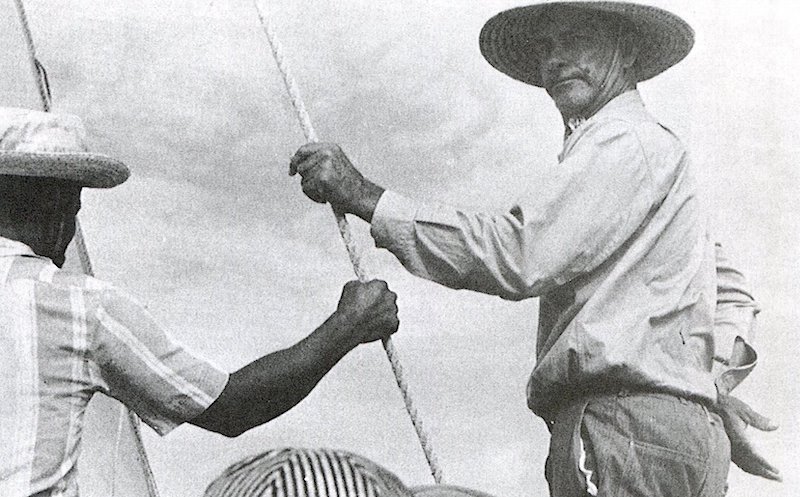 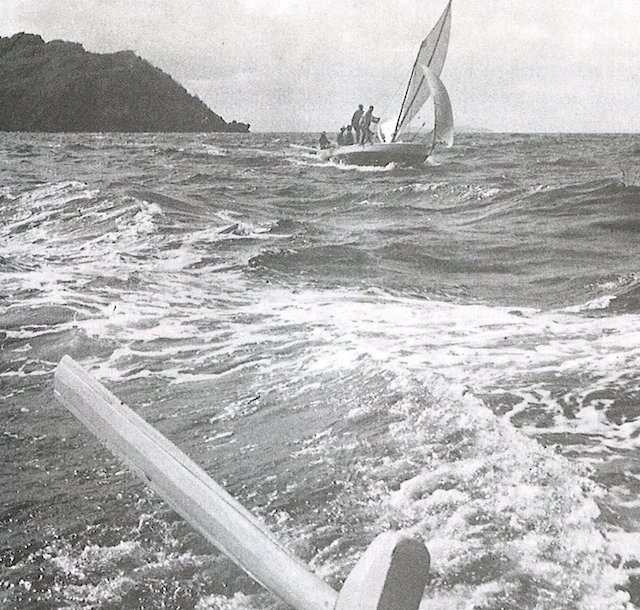 One thing I was surprised to learn reading this book is that Anguilla and St. Bart’s, now epicenters of rich-and-famous life-styling, were both in their day important boatbuilding venues. Anguilla was once a place where large trading schooners were routinely built, in spite of the fact there is no lumber there and no protected harbors. As late as the mid-‘70s running schooners was nevertheless a time-honored profession among Anguillans. 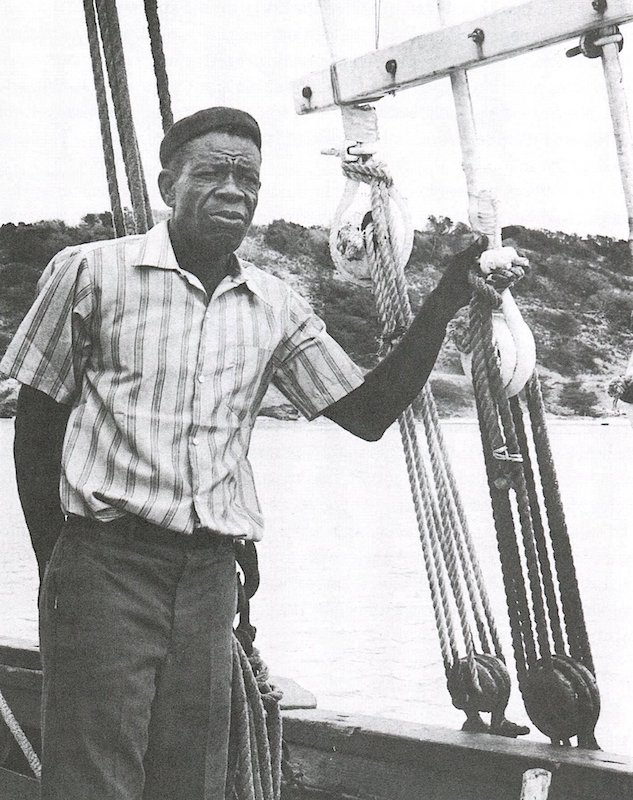 Capt. Arthur Connor aboard the schooner Warspite at Road Harbour, Anguilla, in in May 1975

In St. Barts meanwhile the focal point of the schooner trade was smuggling, a fact that became clear in 1955, when the French government created the “nouveau franc” and all those holding old francs had to trade them in. It turned out there were a quarter billion unaccounted for old francs on St. Barts, and soon afterward the French government got much stricter in its regulation of island trade. 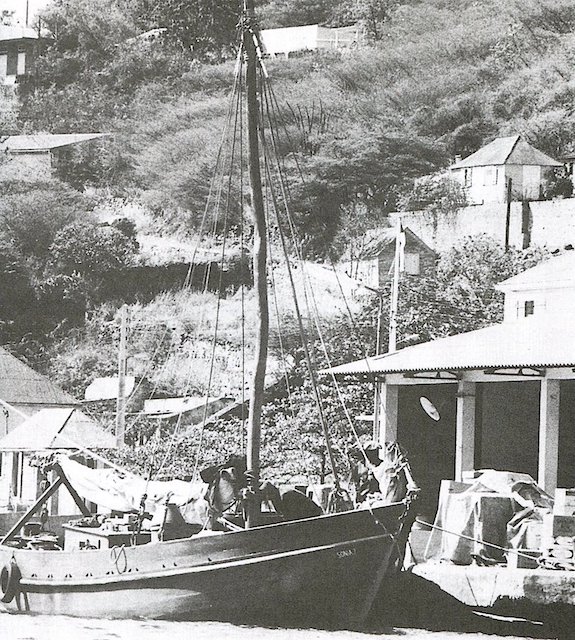 A trading sloop at Gustavia, St. Barts, in 1975, long after the schooner trade died away

Many other islands and types of boats make appearances in these pages. The pirogues of Trinidad, built up on hollow logs, the exotic yoles of Martinique (now routinely raced there), and lots of sloops, lighters, and fishing boats from Tortola, St. Martin, St. Kitts, St. Lucia, and others.

My one disappointment in revisiting Pyle’s book was that he never got over to Puerto Rico to learn about the traditional nativos, once used for fishing and now still actively raced. In researching my soon-to-be published biography of Thomas Tangvald (at last!) I’ve learned a bit about these boats, as they played an important role in his life. I’m sure Pyle would have been fascinated by them.

As for Pyle himself, for some reason he spent an awful long time writing this book and getting it published. He had largely concluded his research by 1976, but the book didn’t appear until the late ‘90s. These days, as I understand it, he is a rancher in Oklahoma. Presumably there’s another interesting story behind that transition.

The book is long out of print, but not hard to find online. 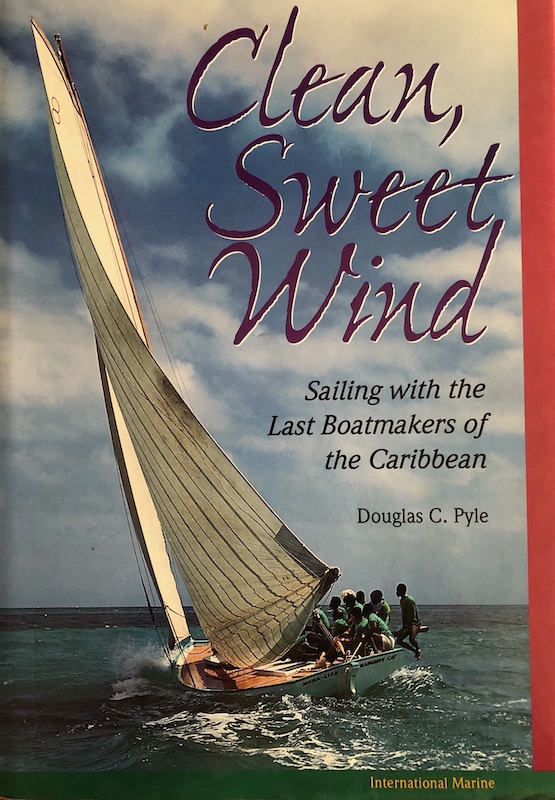 Clean, Sweet Wind: Sailing with the Last Boatmakers of the Caribbean