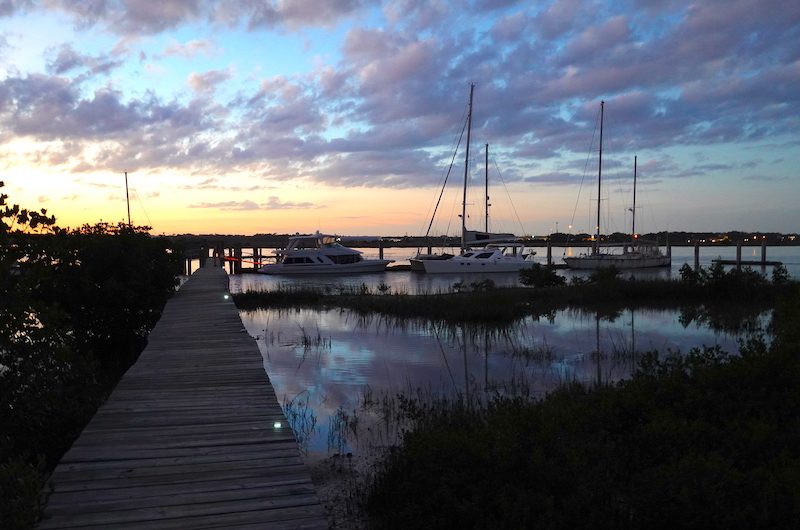 Jan. 8/2022:  Here’s a blast from the past. Behold the long outer face dock at Fish Island Marina in St. Augustine, round about sunset earlier this week. The last time I was here was in late April 1992, when I was crewing on the late great schooner Constellation. We had sailed down from Charleston, South Carolina, to join Jimmy Cornell’s TransARC rally to Europe and arrived at the St. Augustine inlet at about 10 am on a Sunday morning after a long hard night offshore. We had doused our sails and started up the engine and were just entering the inlet in a big rolling swell when suddenly an inky black pillar of smoke came pouring out our midship hatches.

We assumed we were on fire. Three of us rushed below to investigate and the smoke was so thick and oily we couldn’t see a goddamn thing. Meanwhile, the skipper at the helm shut down the engine, and the smoke, thank God, quickly dissipated.

So no, we weren’t actually in flames and later figured out the engine exhaust had fractured. But now we were dead in the water, rolling our guts out, right there in the inlet, not too far from the unforgiving shore. The skipper, to his credit, kept his cool and calmly ordered us to get some sail up. We spent much of the next hour sailing slowly through the inlet to the Bridge of Lions, the famous drawbridge right in front of downtown St. Augustine, carefully timing things so we could sail through the bridge on a scheduled opening.

We then sailed south down the Matanzas River to the mouth of the San Sebastian River, hoping we could turn the corner there and sail up to a yard where we hoped to get hauled out the next day. As soon as we got there we realized however the wind would not permit this. Desperate now for someplace to park, we saw this dock–this long, beautiful, brand new face dock without a single boat on it–directly across from the mouth of the St. Sebastian, just north of the fixed Route 312 bridge, which we were far too tall to pass under. You couldn’t ask for a better place to land an engineless 96-foot schooner. 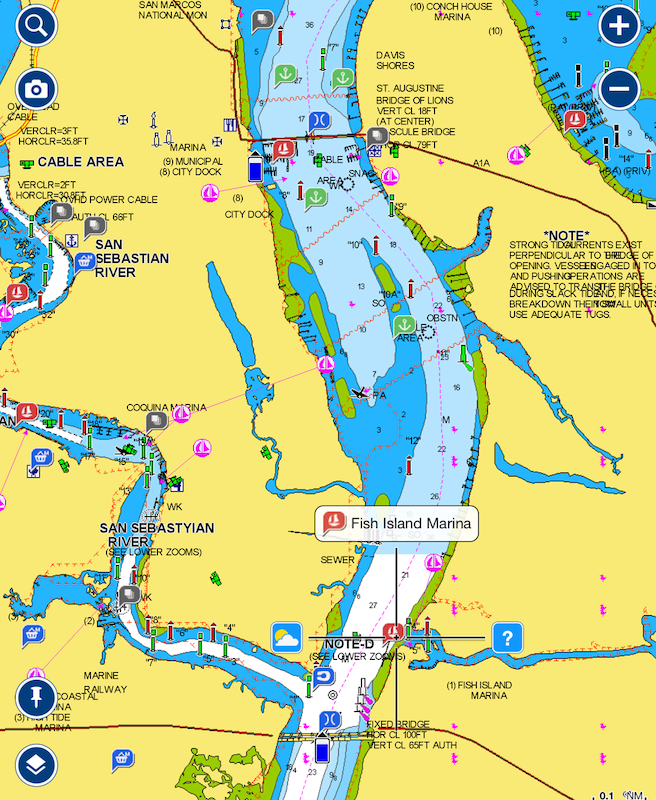 We tacked away from the bridge, dropped the main, and sailed up gently to the dock flying only our fore staysail. I was allowed the honor of lassoing a piling with a spring line so as to brake the boat and bring it neatly to a halt alongside. As soon as we stopped, a group of men marched out from the shore on the boardwalk leading out to the dock and applauded our feat.

Earlier that morning, we soon learned, a friend of the marina’s had buzzed the joint in a small private plane, waggling his wings, clipped a tree, and crashed to his death in the marsh just behind the place.

So it was, for all concerned, a day to remember. 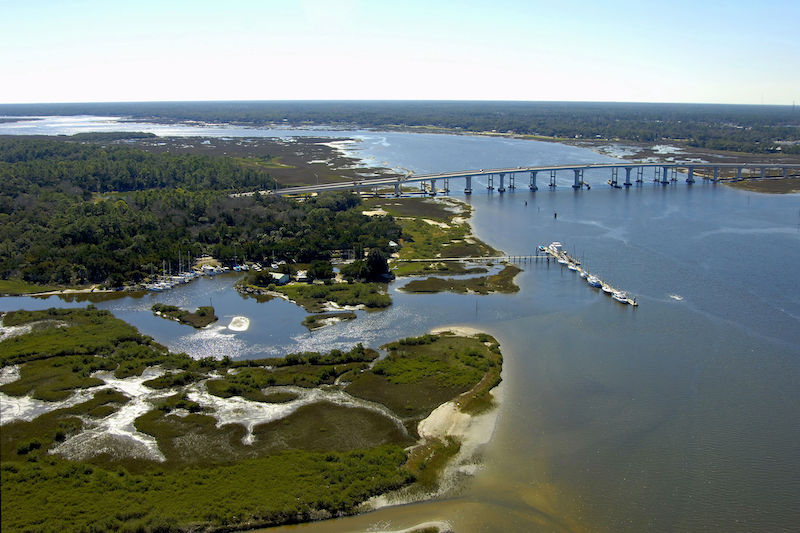 A very nice aerial shot of Fish Island Marina. It is a bit dated. The littoral between the marina and the root of the bridge is now the site of an enormous condo complex

I revisited this place this week so as to check in on Melanie Neale, famous author and yacht broker, and her fiancé Wiley Riklund, who had just moved here from Camachee Cove Marina, where I had last left the good ship Lunacy. I regaled them, of course, with the tale above and had a great conversation with Fish Island Marina’s current owner, Shad Hendry, the son of the man–my ancient journal notes tell me his name was Harold–who owned the marina last time I was here.

For me, back in 1992, this was a magical place. Harold was very gracious and allowed Constellation to stay on his dock, free of charge, as we prepared her for her last great voyage. Beached on the marshy islet just behind the outer face dock was the old wooden ketch on which Harold cruised the Bahamas singlehanded when he was a teenager. The grounds of the marina were patrolled by a squad of angry watch geese, who scrambled in full attack mode after every human they encountered.

I shared all these memories with Shad, and he was grateful. He gave me hot tips he learned as a boy on how to handle hostile geese (hold an arm straight out and hiss at them “shuck, shuck, shuck”) and recalled that the man who died in the plane the first time I arrived here was his dad’s very best friend. He was a plane broker, he told me, an expert pilot, and the assumption was that he in fact committed suicide and intentionally crashed his plane that day. I still remember vividly the day after we arrived on Constellation, when Harold and his crew hauled the remains of that plane out of the marsh behind the marina on a barge. 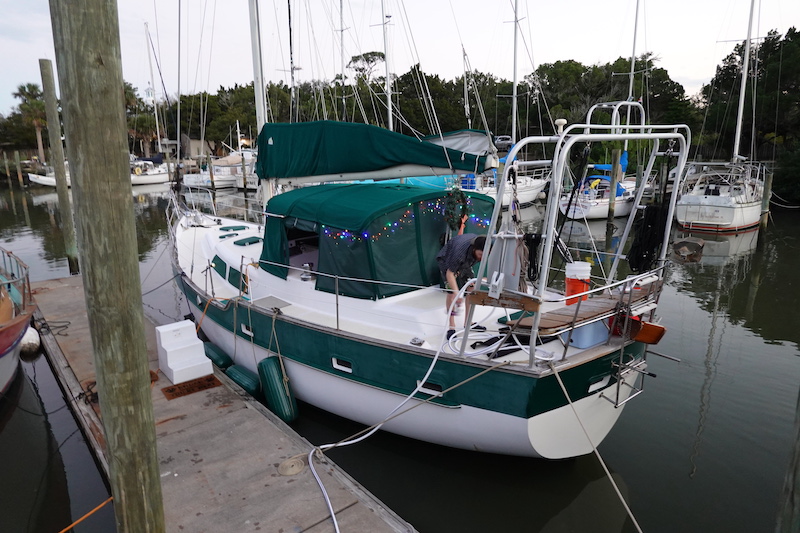 Melanie’s boat Maggie B, an Irwin sloop, at Fish Island. That’s Riley messing around in the back. They moved here both to enjoy lower slip fees and also to get away from the boat berthed next to them at Camachee Cove, an unregistered, untitled powerboat with an inboard gas engine that its erstwhile owner was leasing out on AirB&B. Melanie was very afraid some ignorant B&B guest would someday blow the boat sky-high trying to start the engine

The reason my wife Clare and I flew down to St. Augustine on New Year’s Eve was also to move our boat out of Camachee Cove. Not because we wanted to, but because we were being ejected for lack of berth space. We were on F Dock, in a neighborhood full of active sportfishing boats, and had been told our berth’s rightful sportfishing occupant would be returning this week.

We had a fine time touring St. Augustine on the cusp of the New Year, and visiting with Melanie and Riley, and on Monday Jan. 3 bailed out of Camachee Cove and toodled up the ICW toward Jacksonville. 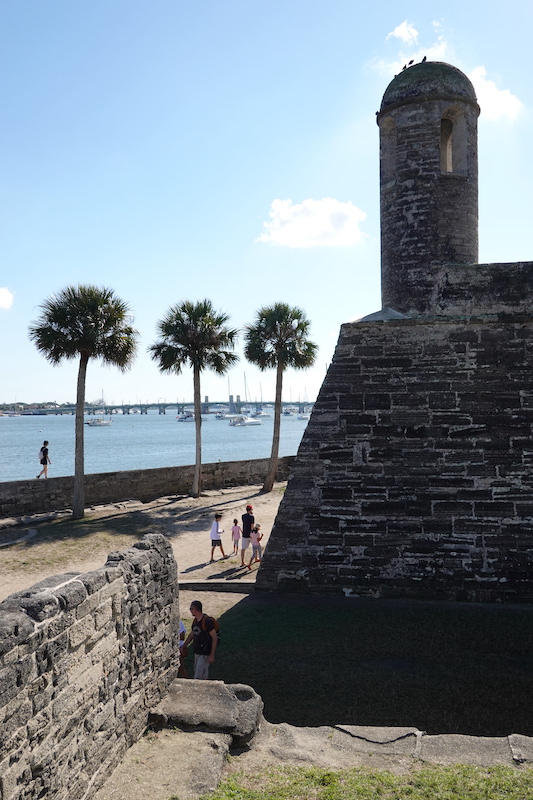 One corner of Castillo de San Marcos, the old Spanish fort that guards the root of the inlet into St. Augustine, the oldest city in the United States, dating back to the mid-16th century. This was on New Year’s Day. We had hoped to tour the interior of the fort as well, but there was a 45-minute wait to get inside 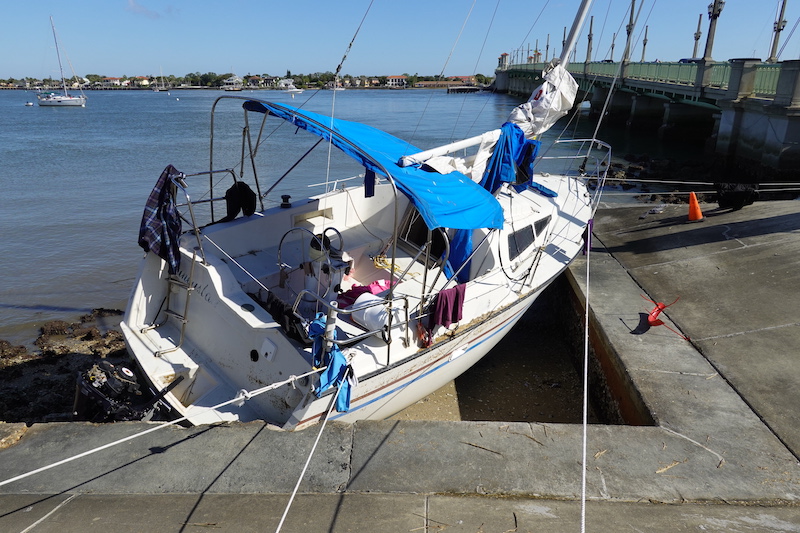 Fortunately we didn’t have to stand in line or buy a ticket to inspect this interesting tourist attraction. Some poor sailboat that dragged anchor in a blow and wedged itself into this corner of the seawall on the town side of the Bridge of Lions. According to the sticker affixed to the front of the mast, the owner, as of November 11, 2021, had five days to move it. Clearly that hasn’t happened. Local bystanders informed us it is now inhabited by homeless people 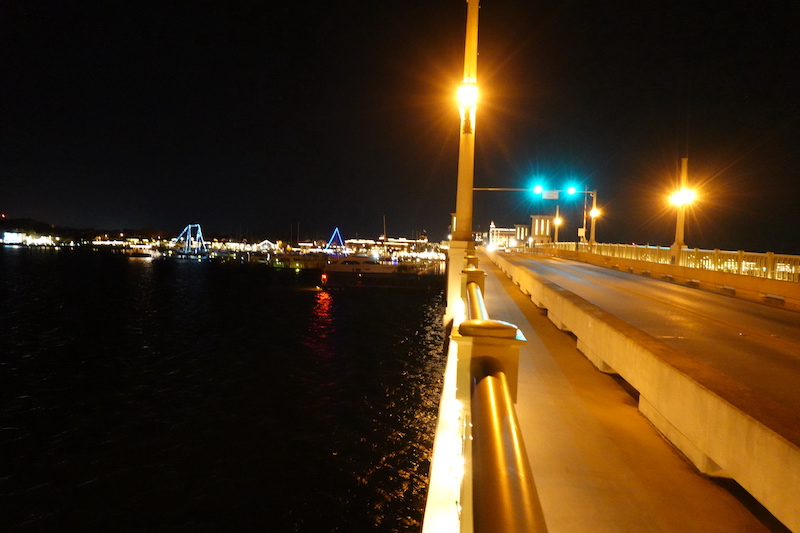 The Bridge of Lions at night, looking back at the municipal marina and the bright lights of town 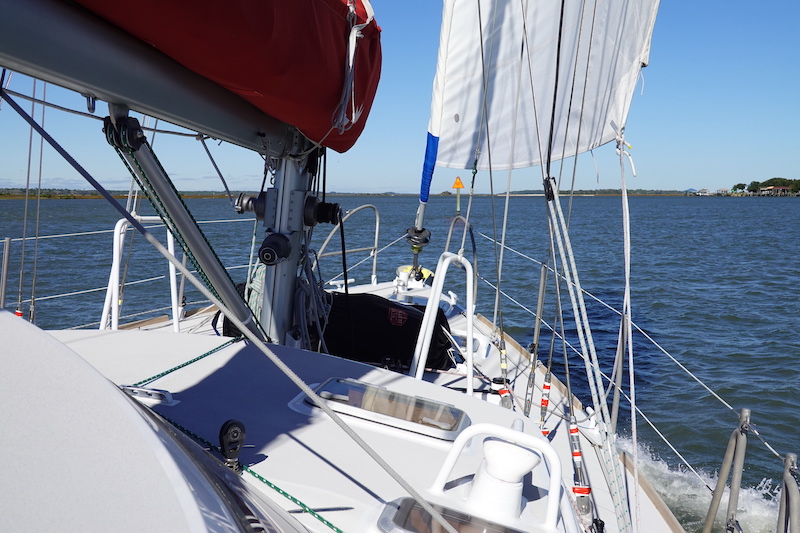 Out on the ICW this past Monday, heading north. It was blowing the dogs off their chains, 20-30 knots, out of the northwest. Early on I harbored hopes of doing some motorsailing en route. Mostly though we just put our heads down, left the sails down, and pushed forward on the throttle 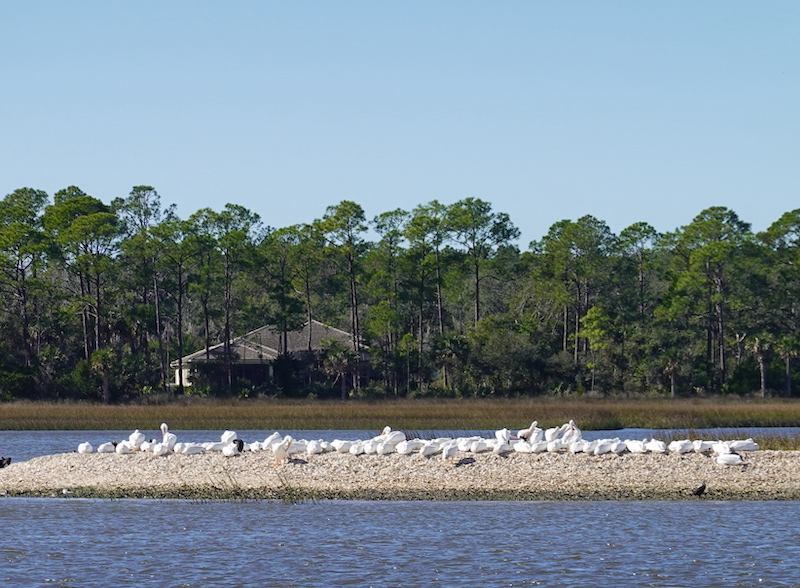 This apparently is what swans do when they think the wind is too strong. We saw three big groups like this, hunkered down and in denial 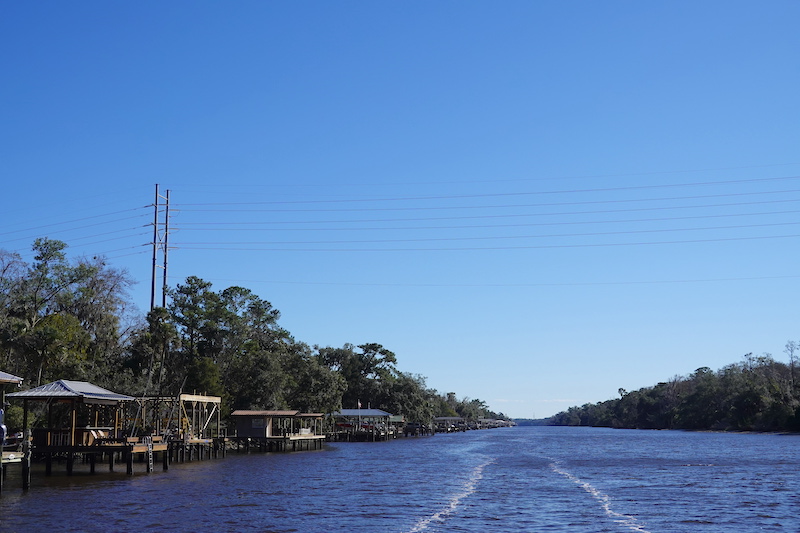 An uncharted hazard a bit south of Jacksonville. Neither of my electric charts, C-Maps or Navionics, nor my trusty paper charts, made note of these power lines spanning the channel toward the north end of Palm Valley. I assumed minimum vertical clearance had to be at least 65 feet and fortunately was not proved wrong 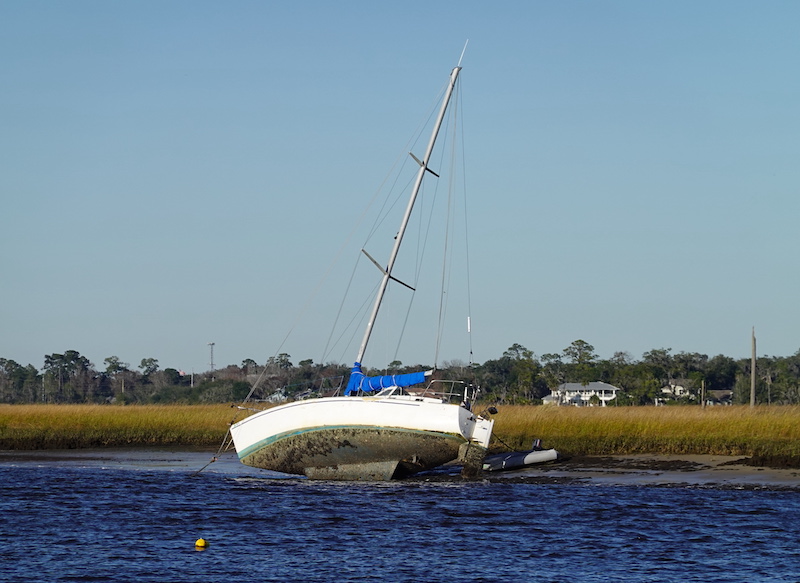 Yet another grounded boat that dragged anchor, just north of the entrance to our new home at Beach Marine, just off the ICW in Jacksonville Beach 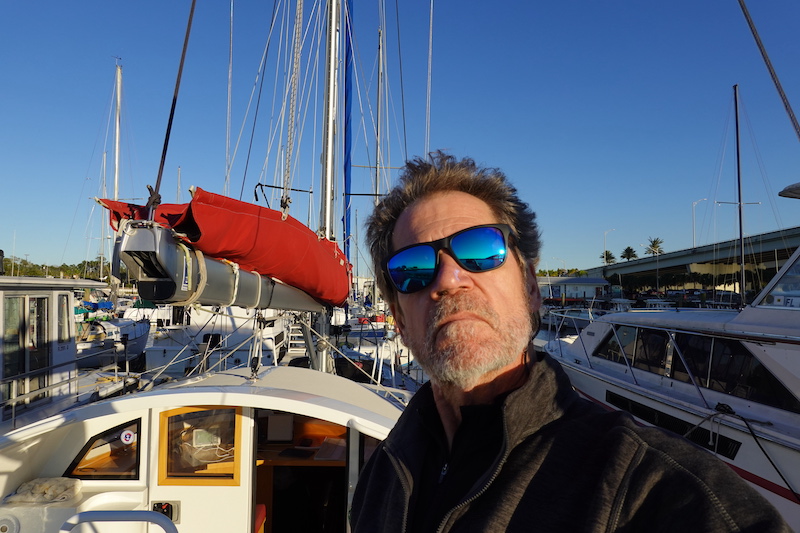 Installed in our new berth at Beach Marine. Berth space in Florida has been tight during this second Covid winter, so I was happy to grab a spot here, just 25 miles north of St. Augustine

I must conclude with a big shout-out to the Windward Marina Group and the general manager at Beach Marine, Lisa Brousseau. Needless to say, we were a bit annoyed at being ejected from Camachee Cove in spite of having paid for berthing in advance until the middle of this month. I argue at Camachee Cove that they should refund us money, or that we should receive credit for our unused balance at Beach Marine, as both Camachee and Beach Maine are Windward properties. I received no satisfaction.

I made the same argument after we settled in at Beach Marine. Lisa, bless her heart, pitched my argument to Windward, and they have agreed to give us a prorated refund for the unused portion of our month’s rent at Camachee Cove. Seems only fair, after all. Although I should note as of this writing I have not actually seen the money appear in my debit card account.

POSTSCRIPT: I should also note, for those of you interested in buying a marina of your own, that Shad is looking to sell Fish Island. He says he’d like to get $12M for it. Contact me via the blogsite if you’d like me to put you in touch with him.