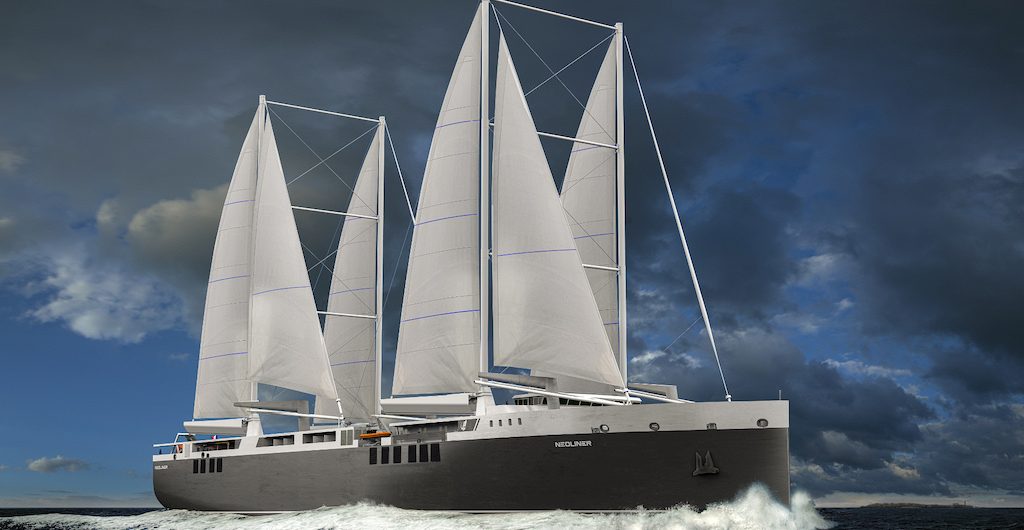 Sept. 13/2021:  In one sense we’ve been here before. Back in the 1970s, when the Arab oil embargo sparked a big increase in fuel prices, the market for recreational sailing vessels got a big shot in the arm while powerboat sales slumped. Now that fossil fuels are leading us into a different sort of impasse–ecologically, rather than economically–we’re seeing a different sort of reaction. The recreational powerboat market in spite of the ominous threat of climate change, is still surprisingly strong. I continue to be amazed, for example, by the ever larger number of giant outboards people contrive to hang on the transoms of relatively small center-console skiffs. But folks on large commercial cargo-carrying vessels, who have a lot more at stake, are taking a very hard look at how best to harness the wind again so as to reduce carbon emissions.

Some burgeoning commercial sail projects smell strongly of grassroots nostalgia. The traditional 92ft brigantine Tres Hombres, for example, has been carrying small boutique cargos of commodities like chocolate and liquor back and forth across the Atlantic for the past 12 years. One of their selling points, beyond the sustainability of fuel-free transport, is that consignors can help the crew load their cargo by hand and can even “work the sails and take the helm” if they like. This may be charming, but projects like this are too small and marginal to make much difference and are not a reasonable way forward for the countless businesses now shipping approximately 11 billion tons of goods (about 1.5 tons for each person on the planet) across oceans each year. 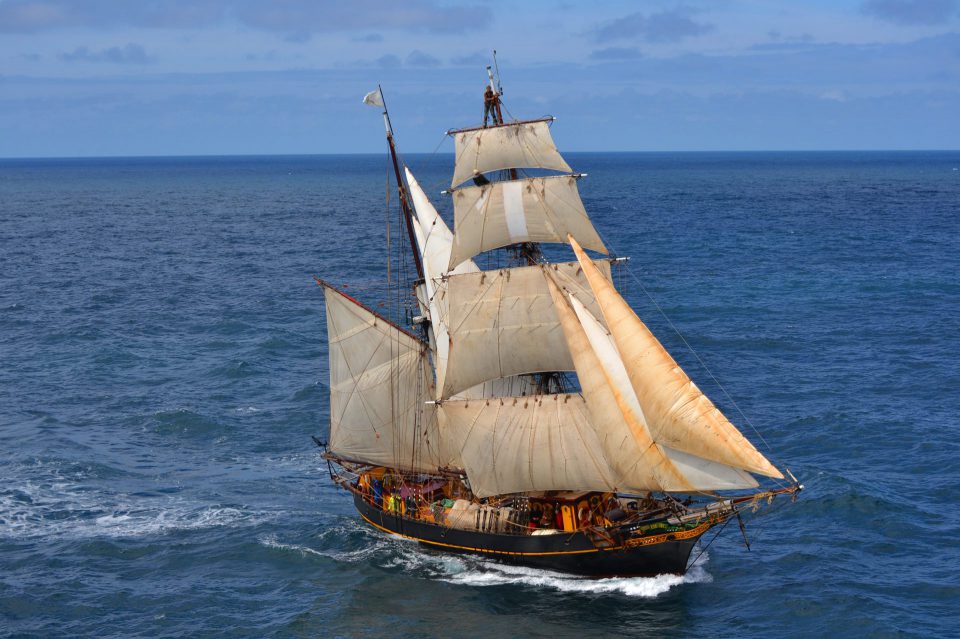 Tres Hombres under sail. I love this project, of course, but it’s just not practical. Even if we significantly reduce the quantity of goods we ship over oceans, I expect relatively small traditional vessels like this will be unable to carry enough cargo to satisfy demand

Other projects seem more transitional, aimed at using the wind to reduce fuel consumption, but still relying primarily on motors and props to get cargos to their destinations. One Norwegian concept, Vindskip, posits a roll-on/roll-off (RoRo) ship with a tall foil-shaped hull to reduce aerodynamic drag and increase lift while underway. Less dramatic, probably more realistic visions include large computer-controlled kite sails–as promoted by SkySails for example–that can be retrofitted on to existing ships. Other systems involve mounting vertical aerofoils (see econowind.nl for example) or solid rotor sails (norsepower.com) on otherwise conventional vessels. 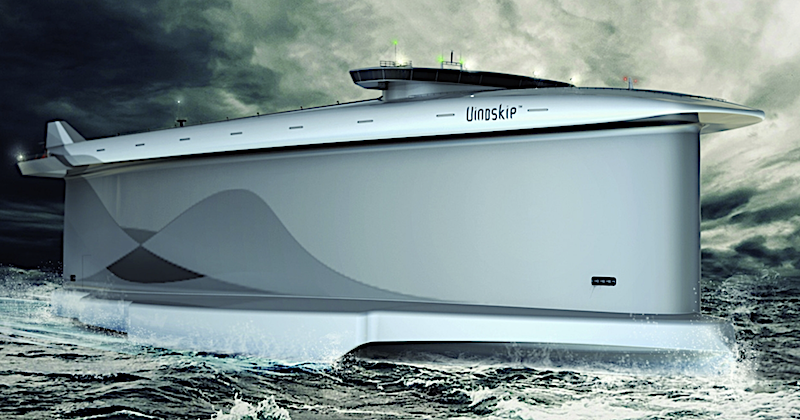 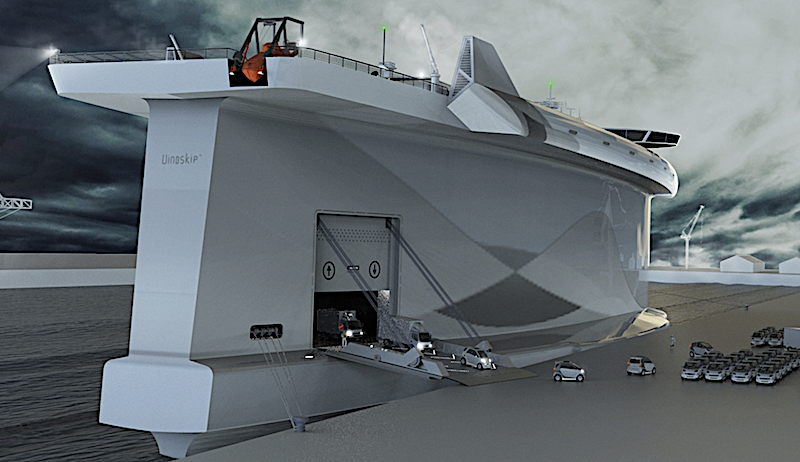 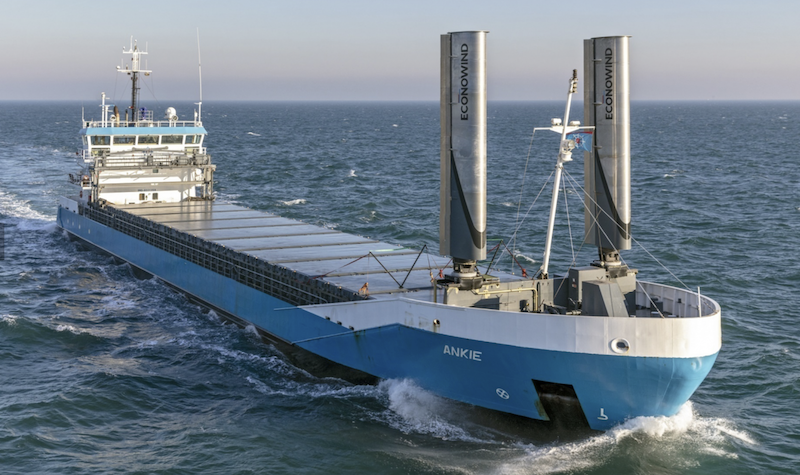 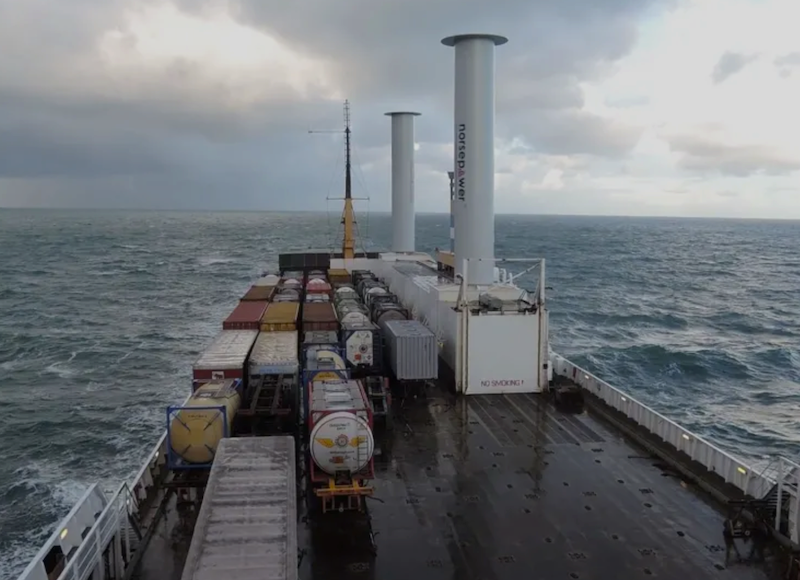 Norsepower rotor sails can also be retrofitted on existing ships. One advantage is ships equipped like this can still carry deck cargo. But the fuel savings aren’t great. Norsepower, for example, claims its system results in just a 5 to 20% reduction in fuel burned. That’s nice, but still a long way from carbon neutral

As a sailor I’m naturally most interesting in true sailing ships, as opposed to clunky motorsailers. One project I’ve been keeping a close eye on is the French Neoliner (see image up top), a RoRo ship flying conventional furling sails from four masts set in a unique double biplane layout on deck. The first-generation ship, now scheduled to launch in 2024, is nearly 500 feet long, with 54,208 sq.ft. of sail area, a displacement of 11,000 tons and a deadweight capacity of 5,000 tons. A proposed second-generation Neoliner, hopefully to be launched in 2030, would measure almost 700 feet, with six masts on deck.

What’s really cool is there is a decent chance this may actually happen. The roster of Neoline executives and board members is heavily weighted with ex-merchant marine skippers, and the company has lined up financing, has signed a letter of intent with a builder, and has an impressive group of partners committed to moving freight with them. One of these partners, appropriately, is Groupe Beneteau, which happily envisions moving the many boats they export to North America by sail, courtesy of the Neoliner. Other partners include Renault, Michelin, and the Manitou Group. 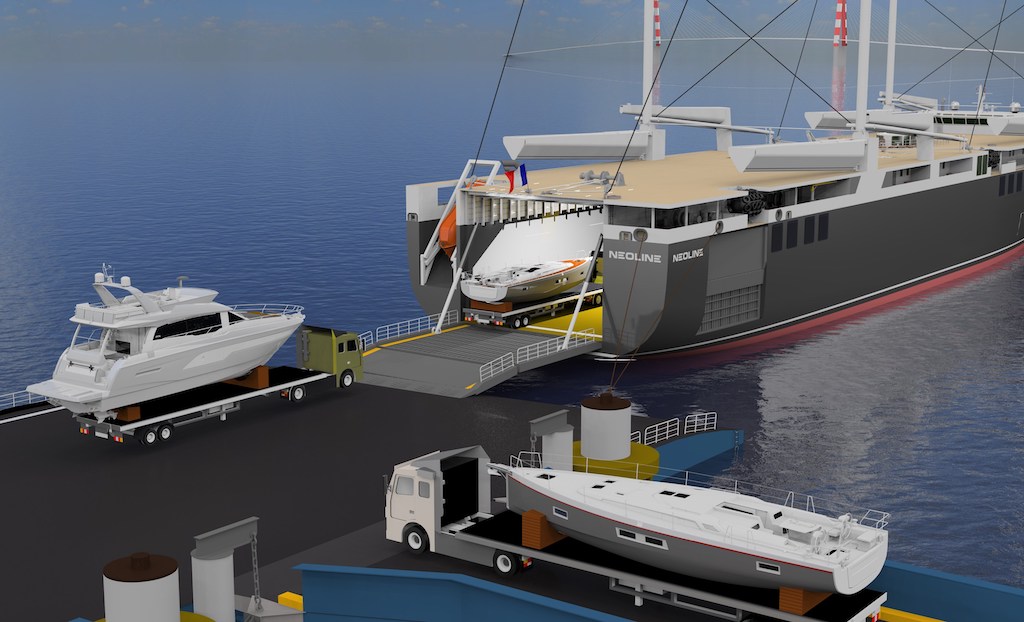 Artist’s rendition of Beneteaus being loaded on to a Neoliner. Designs of fully modern sailing cargo vessels do seem to favor the RoRo configuration, with decks clear of cargo so as to fly sails

An equally impressive group of technical partners includes–again most appropriately–MerForte, a rigging engineering firm founded by Michel Desjoyeaux, the famous Vendée Globe skipper. And the rig is indeed the most critical component of the Neoliner. Though the ship will have a 4,000-kW diesel-electric engine, it shall primarily rely on its sails to maintain its 11-knot cruising speed, with a projected 90 percent reduction in carbon emissions compared to conventional vessels. The hull design features retractable foils and a relatively narrow beam. The tandem biplane sailplans are cleverly designed to fold partway down when sails are furled, reducing the ship’s air draft from 200 feet to 134 feet when necessary. 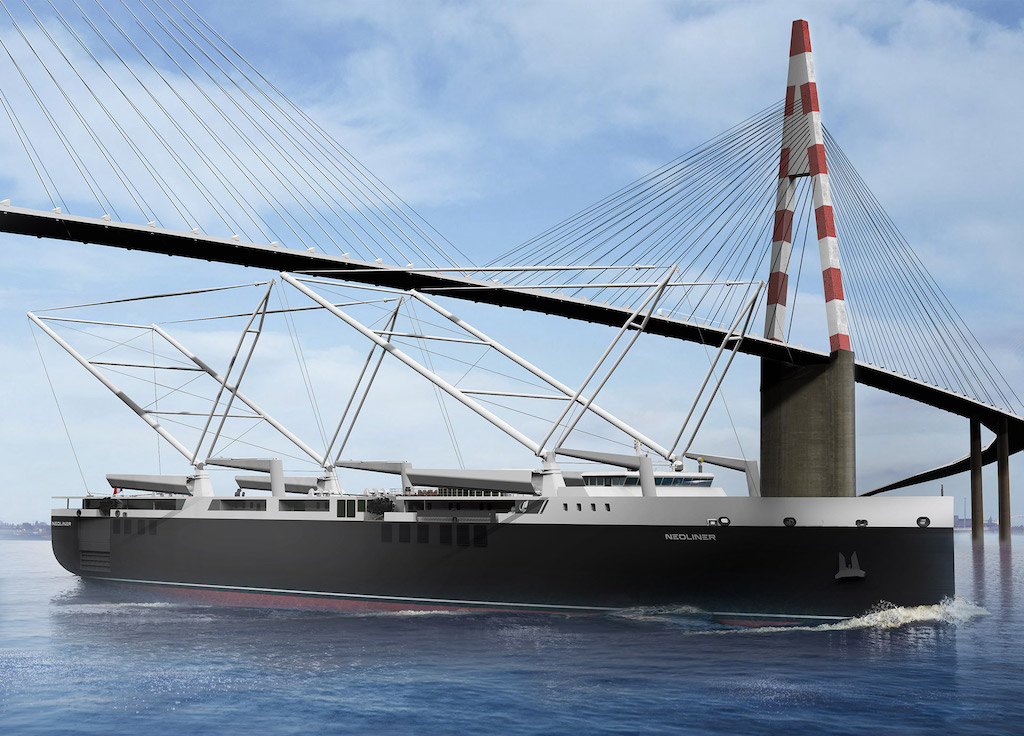 The sailing cargo ships of the future are bound to be very different from the sailing vessels that carried freight for thousands of years prior to the advent of fossil-fueled vessels. We’d do well to remember that steam ships and their successors have dominated commercial shipping for only a brief time, little more than 150 years. For those of us who have remained true to sail all along, it only seems right that human commerce should return to it.

The wind, after all, is just as free, and carbon neutral, as it always was.