June 28/2021:  For the first time since we acquired her in 2017 Lunacy spent the past winter on the hard in storage rather than floating about somewhere warm. This was primarily a function of the pandemic, which made a Caribbean venture problematic, but also it was about time to catch breath and focus on making some changes to the boat.

At the top of the punch list I handed Maine Yacht Center last fall was raising the waterline. The existing waterline aft was much too low and the persistent growth on the unpainted hull under the overhanging transom was getting increasingly hard to manage. Pondering the question of how high to raise the line, and the mechanics of drawing a straight line around the odd-angled corners of the hard-chined hull, I hit on the simple expedient of making the chine itself the waterline.

I wondered, of course, how this would look when the boat was floating again and now I have my answer. (See photo up top.) Quite distinctive, don’t you think??? 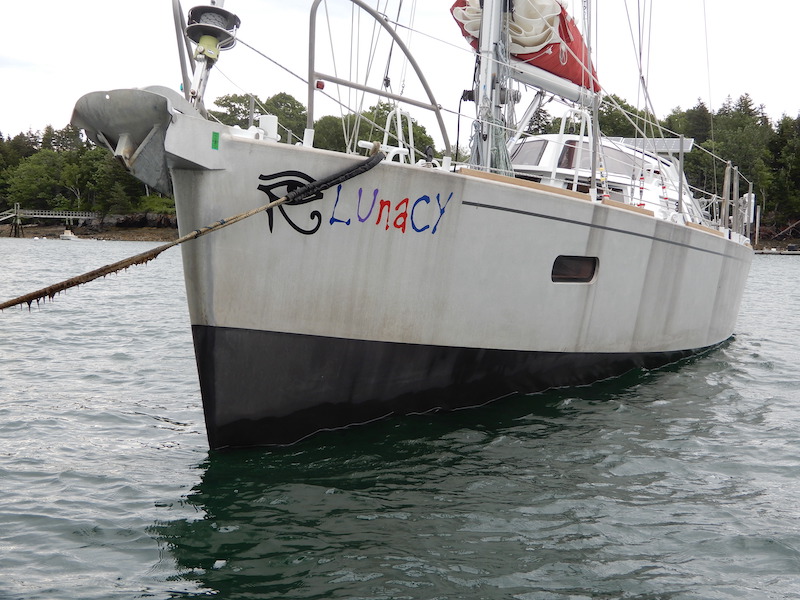 I keep wondering if I should put some Cheshire cat smiley teeth in the black void at the bow. Jeff Stack, the service manager at MYC, is meanwhile pushing for shark teeth 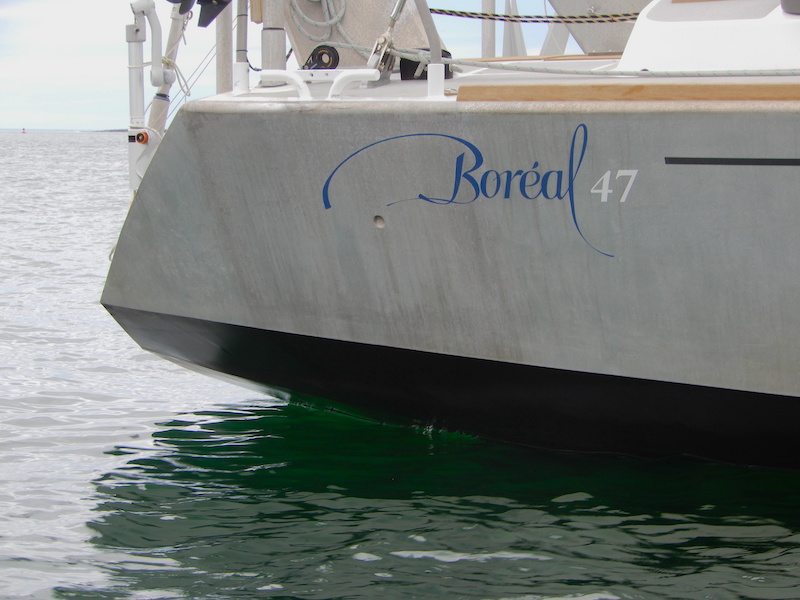 The problem area aft is a problem no longer

Another important item was adding a manual bilge pump that could pick up water from the lowest bilge sump on the boat. The Boréal does of course come equipped with a manual pump, but this unfortunately is plumbed only to the engine sump, which is quite high in the boat relative to the deepest part of the bilge. In an ultimate emergency I feel one does want a hefty manual pump that can pick up everything. The point for me was driven home in one instance where the electric pump in the bilge sump failed, and the sump was heavily flooded with water that came aboard in strong conditions via the unplugged anchor hawsehole and the chain locker. Having to bail out the very deep sump by hand with a bucket and small piston pump was, believe you me, a royal PITA. 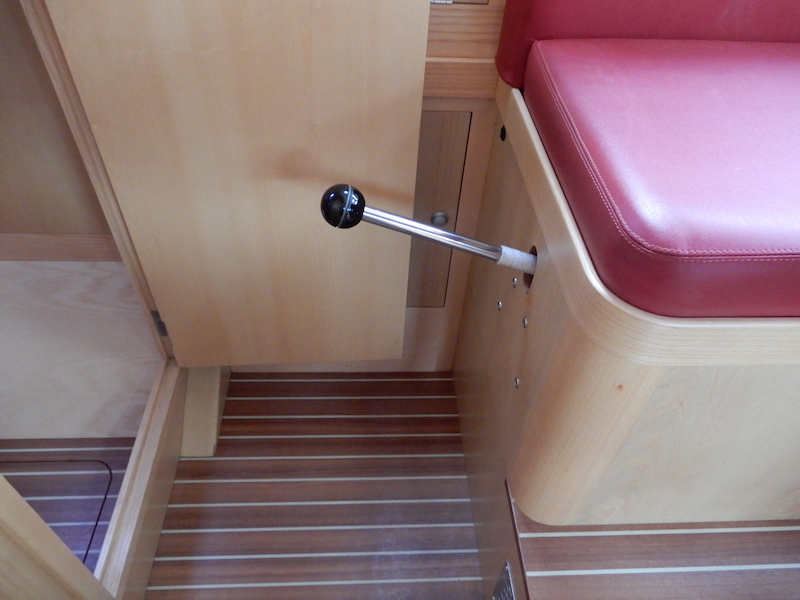 I had MYC install the pump at the aft end of the port saloon settee, where it is easy and comfortable to work the pump handle 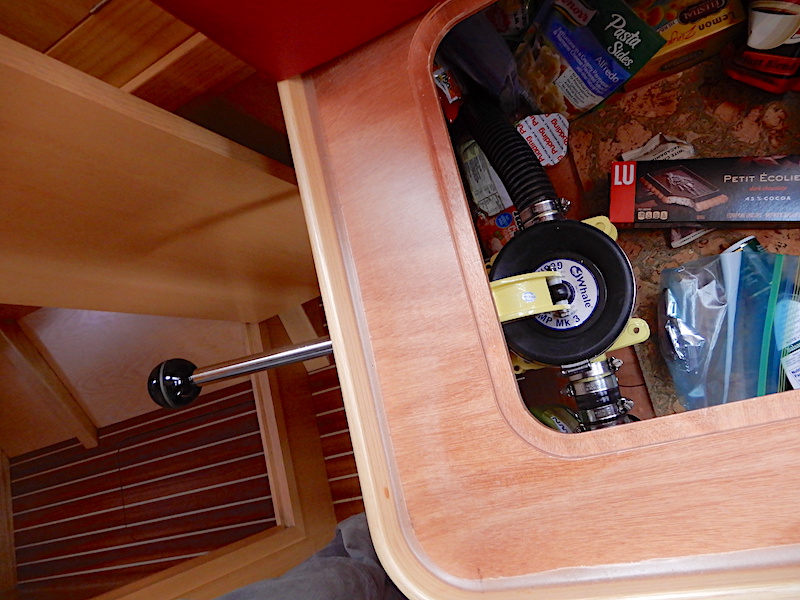 The body of the pump, inside the under-seat storage locker, is discretely installed and doesn’t really limit use of the locker

Yet another problem gnawing on my mind for years now has been the perpetually flooding transom lockers. These are on the scoop transom and promise to be very useful places to store swimming gear and other paraphernalia, except in Lunacy’s case three of four lockers are flooded every time the boat sails in strong conditions, upwind or down. The process of how exactly the flooding occurs has always been a mystery to me, as I’ve never actually seen any spray or breaking waves assaulting the locker lids. I’ve tried various times to improve the lid gaskets, to no avail. And yes, children, having to continually bail out these lockers by hand is also a royal PITA. 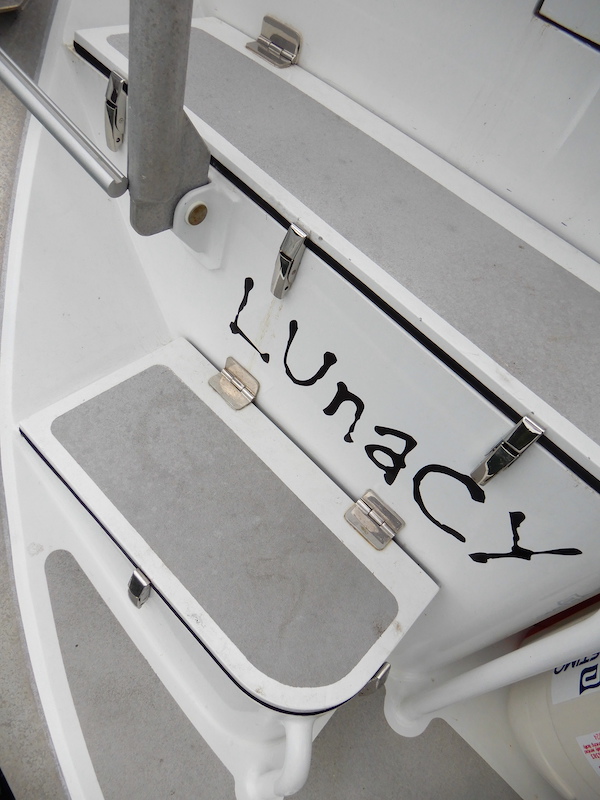 So now we’ve installed more latches on each locker. The big lockers up high now each have three latches instead of just one, and the smaller lower lockers each have two. I pray this makes a difference, otherwise I’ll be tempted to just drill drain holes in them and have done with it

The biggest upgrade by far was getting a new mainsail. The full-batten mainsail Lunacy came with has always been very hard to hoist and sometimes to reef, a function I’ve always assumed of the sheer weight of the thing and the compression loads the battens impose on the sail track. When ordering the boat I originally asked for a main with only the top two battens full and the rest partial, as I have long preferred this arrangement. The two JFs at Boréal talked me out of this however, and I have since regretted it. Now at last I have the sail I wanted, built for me over the winter by Richard Hallett, and it works a treat–much, much easier to hoist and reef, and about 30 pounds lighter with battens installed. 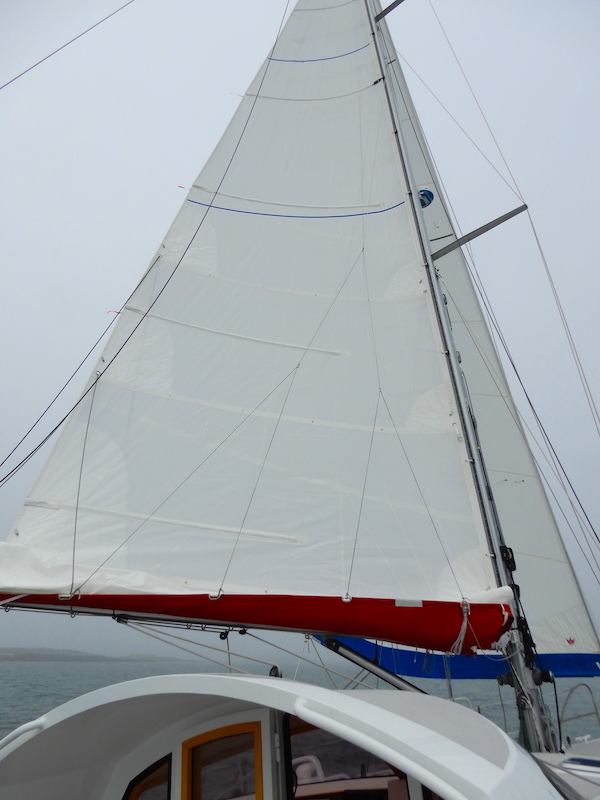 The new mainsail in action, with one reef in. Richard also patched up the boom bag for me and added some chafing gear and made some small repairs to the genoa

Now finally, with the modified staysail I put on in the fall of 2019, I have the sailplan I feel suits the boat best.

Case in point: during my first outing aboard Lunacy earlier this year, with the staysail down, I sailed dead to windward up a narrow channel, tacking a total of 17 times in four hours, singlehanded, no problem. With the original rig this would be virtually impossible. 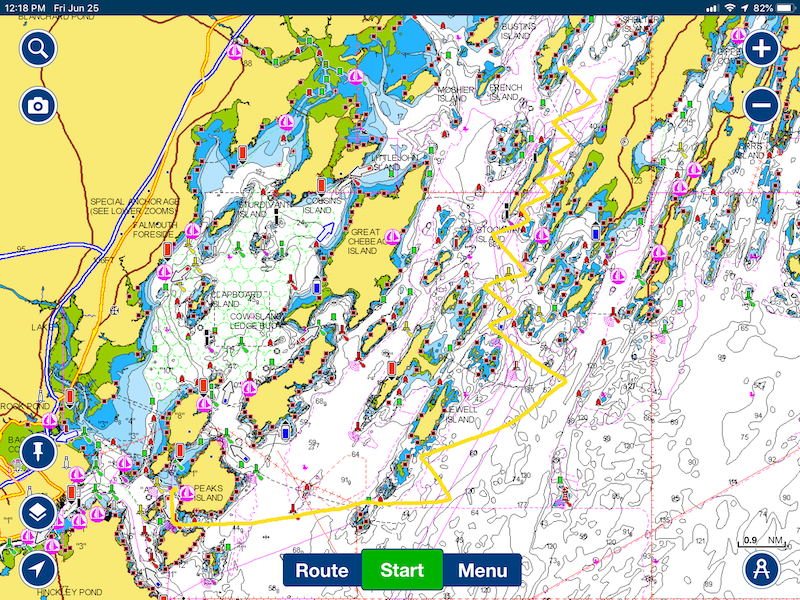 Why they call it beating. I sailed 21 miles over the ground to make good about 12, but enjoyed every minute of it. This was in wind ranging from 9 to 23 knots apparent, under full main and genoa

As much as I have exulted over the new improvements to Lunacy, the process of commissioning her after a winter on the hard has been a bit frustrating. The fresh-water system in particular has been a real bear. At first I couldn’t get any water flowing anywhere. After replacing two broken pumps, an electric pressure pump and one foot-pump, I did manage to get water flowing from the starboard water tank. The port tank, meanwhile, refused to yield anything. Finally, after a long process of trial and error, blowing air through lines with my inflatable dinghy pump and sucking on them with a small drill pump, I discovered two check valves (not depicted on the plumbing plan that came with the boat) that had frozen up solid. Once I replaced these everything was fine. 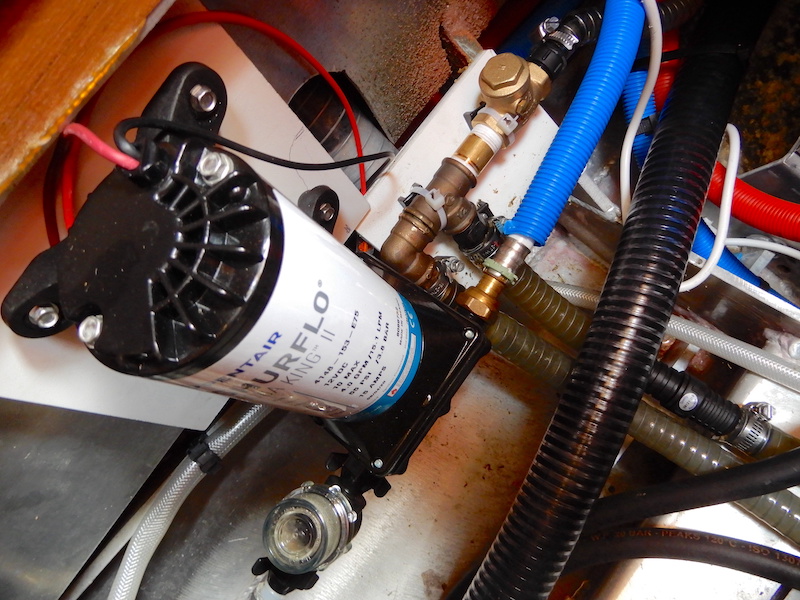 Where most of my problems lay. The new Shurflo pressure pump replaces an Italian Marco pump that claimed to be self-priming, but wasn’t. The three-way plumbing junction you see directly to the right of the pump now features two new check valves. This junction and the valves are necessary because a single feed line from the port tank serves both the pressure pump and the foot-pump in the forward head, in a convoluted spiral of plumbing that sees the line to the pressure pump going through two sharp U-turns over a very short distance. The starboard tank meanwhile has two feed lines, one for the pressure pump and one for the two foot-pumps on that side of the boat, with no U-turns or check valves required. Why this wasn’t duplicated on the port tank is a mystery to me. The largest dark hose you see in this photo is for the new manual bilge pump

In the midst of my struggle with the water system came another small crisis. All of a sudden one of the overhead ceiling panels in the forward stateroom, the largest one on the boat, some eight feet in length, came crashing down on to the double berth beneath it.

It was very easy to see what the problem was here. The glue securing 23 of the 24 plastic snap-buttons on the underside of the panel had let go. This would seem an easy fix, but in fact proved to be a nasty, tedious job. This was because the old glue had a habit of turning thickly viscous when heated up, even just by a bit of sun or a bit of grinding. This made it very hard to remove it from both the little plastic buttons and the spots on the panel they had been glued to. 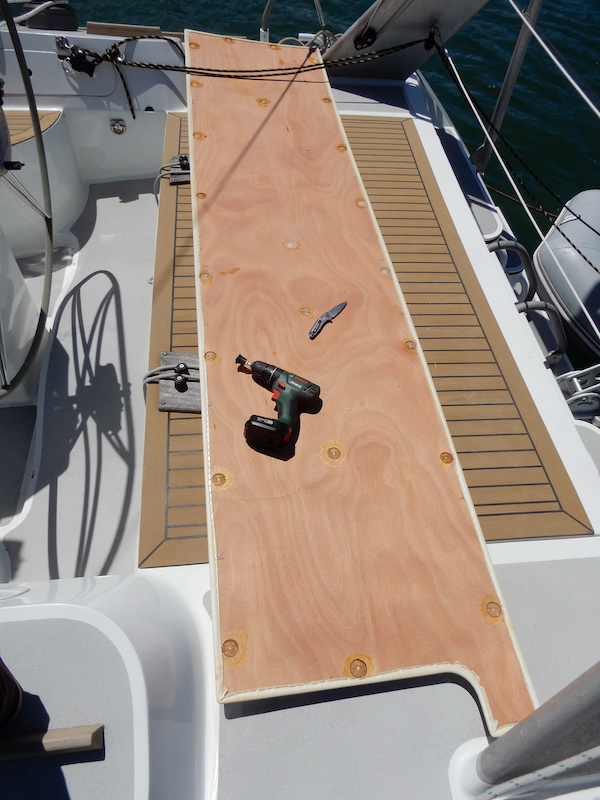 The fallen ceiling panel, deployed on the aft deck for regluing 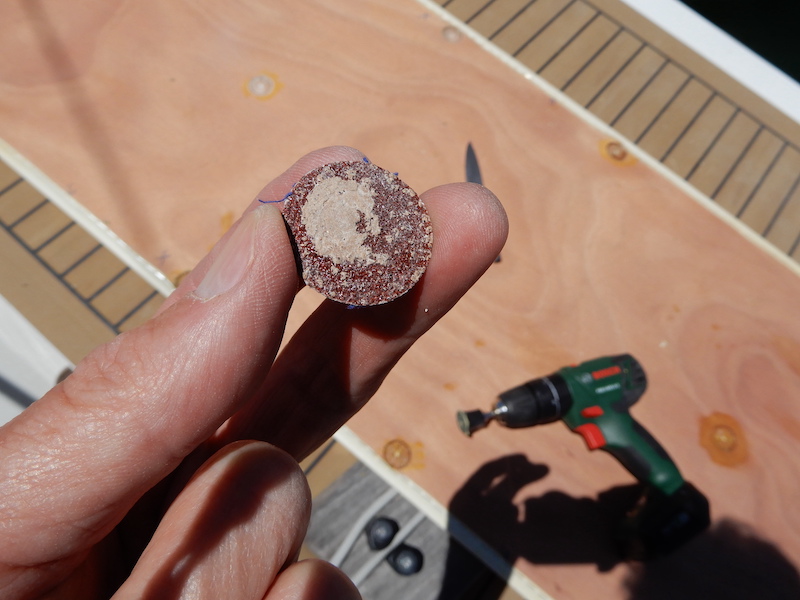 I succeeded in finding tiny 1-inch grinding pads that could be mounted on a cordless hand drill and planned to use these to grind off the little circles of old glue on the underside of the panel. Unfortunately, the moment a grinding pad touched the glue, it heated up and liquefied, quickly clogging the pad. It took many, many grinding pads and lots of scraping with a pen-knife to get all the old glue off 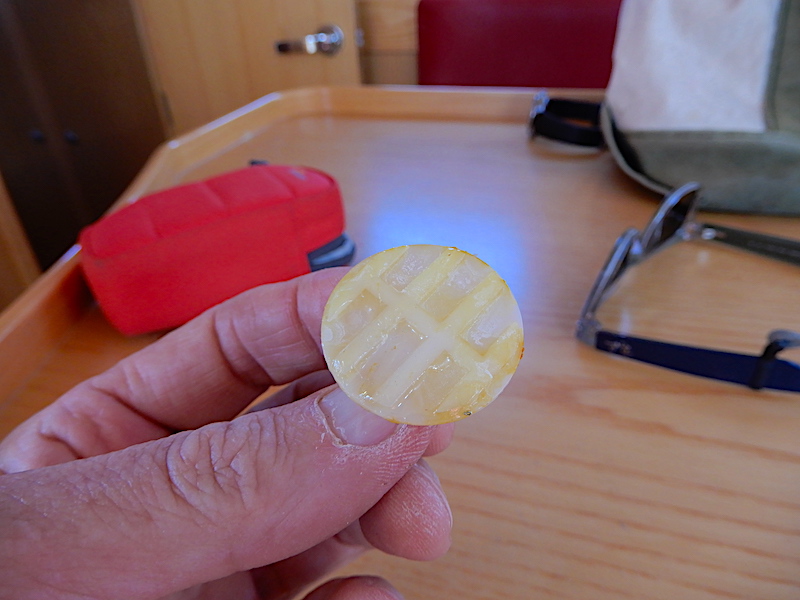 It was so frustrating I gave serious thought at one point to just screwing the damn panel back into place. But my better angels prevailed, and I at last got all the old glue off and the buttons reinstalled with two-part epoxy. And now, once again, the panel hangs serenely over the master berth with no screws showing.

Glue failures, I have noted, have been a major theme in my maintenance adventures on this boat. The first involved the external slotted strainers that had been glued over all the through-hull apertures below the waterline. All these fell off within the first few months of our owning the boat, and I decided simply to leave them off. The next involved, and still involves, the veneer trim on the interior furniture, little bits of which occasionally delaminate and must be glued back in place. Likewise, I have had to glue large pieces of the cockpit table back into place on three different occasions. Finally, it seems it was a glue failure, or perhaps a complete lack of glue, that led to the bottom rudder bushing falling out of position back in 2019.

One treat this season has been getting a chance to confab with Nigel Swiss, owner of Quid Non?, a Boréal 44. Nigel, you may recall, appeared at MYC with his boat back in the summer of 2019, having sailed over solo from the UK. The poor lad’s engine had flooded, due to some “terrorist plumbing” performed by a clueless technician in the UK. Nigel stored the boat at MYC that winter while negotiating an engine replacement via his insurer. Due to the pandemic he was unable to get to the boat from the UK in 2020, and so she sat in storage all that year and on through the next winter.

Finally this spring it was possible to launch Quid Non? again. A new Volvo engine had been installed to replace the old egregiously damaged one. Though bench-tested by MYC before it was installed, it promptly refused to function as soon as the boat was launched. Volvo techs descended on the yard to solve that problem, but then Nigel discovered the shaft seal on his prop was leaking and found the rotor set screw was frozen solid, so adjustments could not be made. The rotor and seal had to be cut off the shaft with a grinder and the whole apparatus replaced. 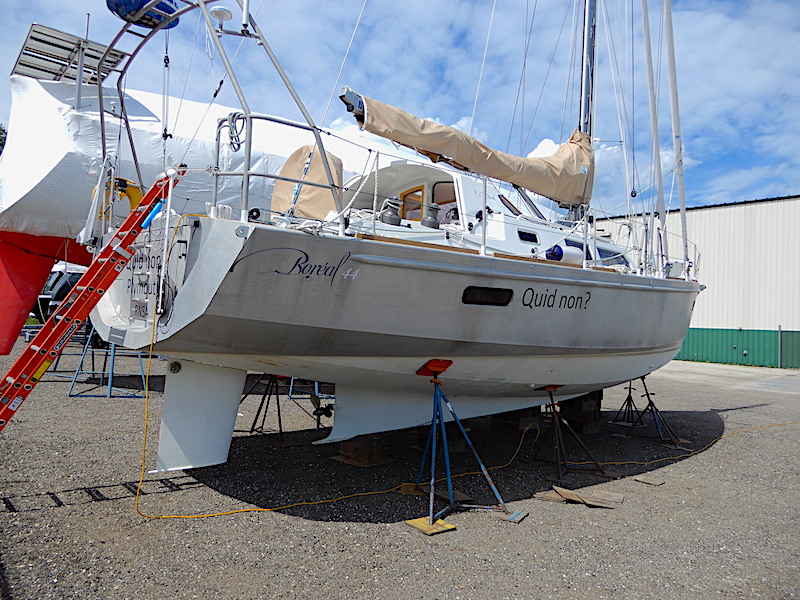 Quid Non? out of the water once again (just briefly) for a shaft seal replacement

Boats in the end will always be boats. A constantly boiling stew of problems to solve.

Hopefully now Nigel’s luck has changed. As I write he is winging his way back to the UK on his boat on another transatlantic, this time doublehanded.

May God go with him and his crew.