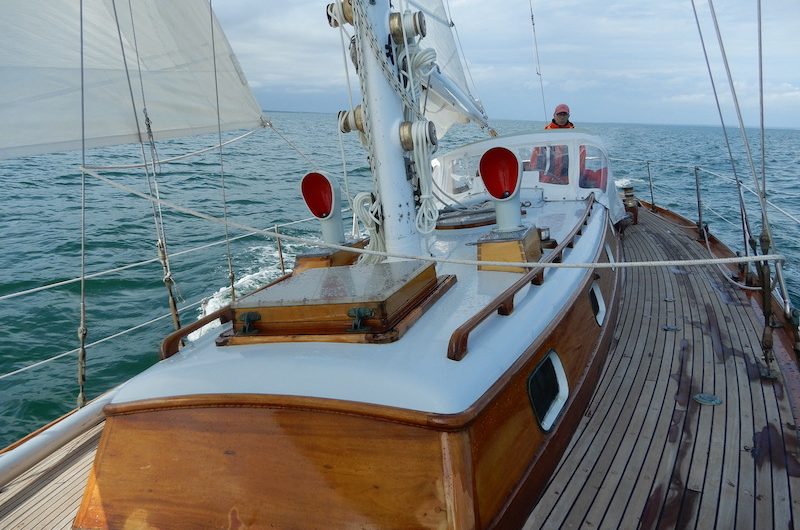 June 23/2021:  I’ve always loved the feel and ambiance of a traditional plank-on-frame wooden boat, but I’ve never been too crazy about the idea of actually owning and maintaining one. So this was a very fine opportunity, getting to take someone else’s 41-foot Aage Nielsen sloop on a short jaunt down the New England coast.

This is a much-loved boat. She was built in 1964 by Paul Luke, the all-time maestro of Nielsen builders, and for a time was Luke’s personal boat. I’m told he very much regretted selling her. More recently, as Taygeta, she was in the same family for over 40 years, based in Marblehead. She served well here, winning the Marblehead-Halifax Race in 1991, several local races, and a few New York Yacht Club cruise-races. She was again reluctantly sold to a new owner, Philip Hood, who sails out of the Pequot Yacht Club in Southport, on the north side of Long Island Sound. Philip had carved out enough time to sail his new craft, now dubbed Delphinus, from Rockport, Maine, where he had her refit and upgraded over the winter, to Marblehead. Here he had a happy chance to confab with the old owners, but he didn’t have time to continue on to Southport.

Which is where I came in. 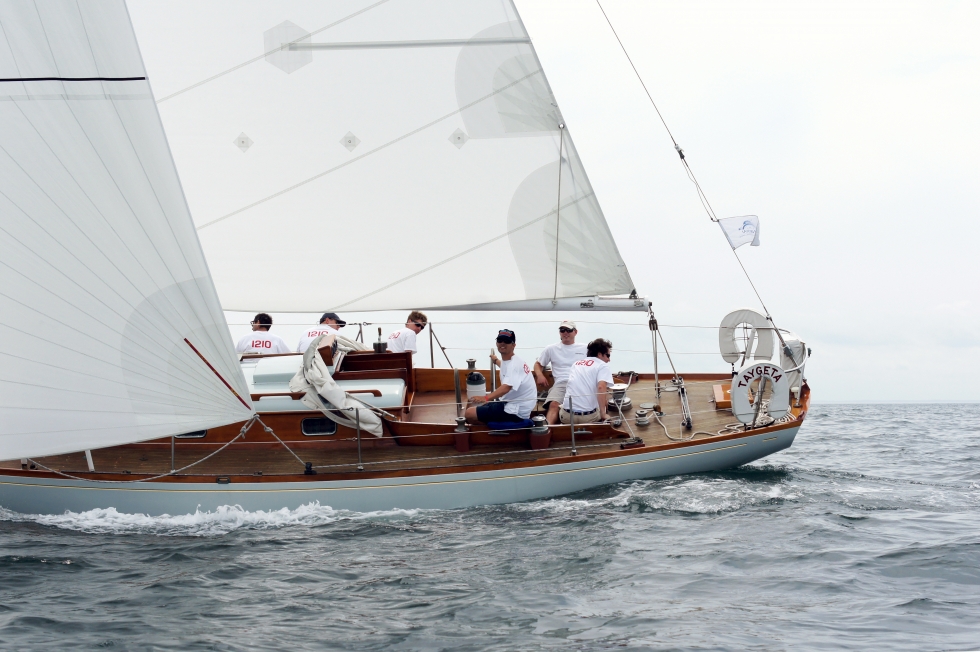 Racing under prior ownership as Taygeta 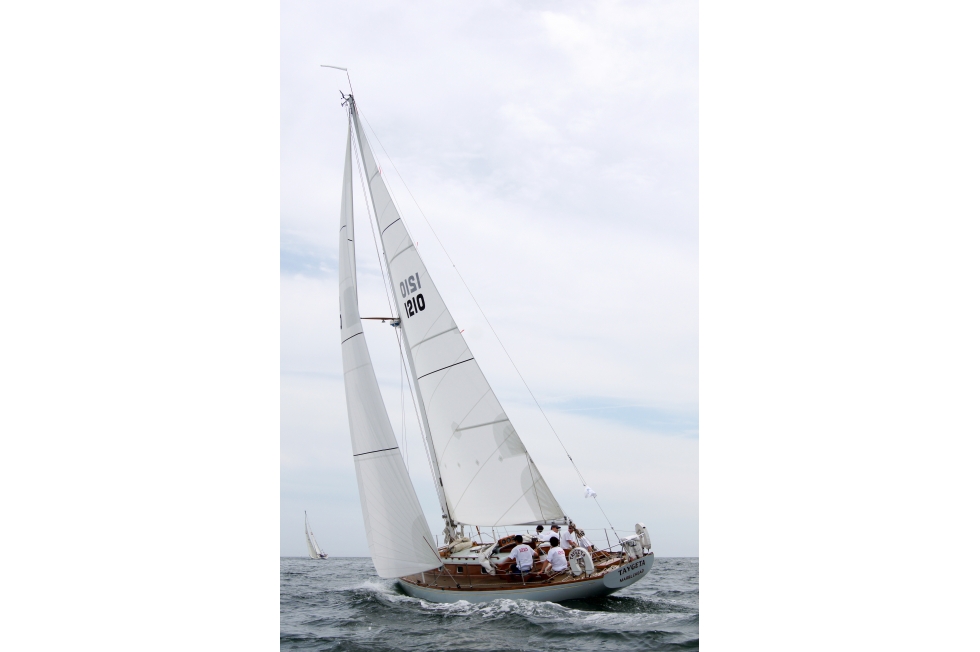 I hadn’t done a pro delivery in a while, but no way could I pass up a chance like this. Problem was when I arrived at the Eastern Yacht Club on a Sunday evening in mid-June with my usual-suspect crew, SAIL’s Adam Cort, we were looking at a forecast that promised headwinds or no winds and nothing but hard motoring. Monday in particular looked like it might throw us a real head-banger getting down to the Cape Cod Canal.  Adam had made noises about pushing back a day to avoid this, but I told him we were on a delivery here and he better bring along his big-boy pants.

Turned out we didn’t need those pants. We got out of Marblehead at 0445 hrs Monday morning and had a flat-water motorsail with only a moderate headwind and some spitting rain down to the canal. We hit the tide change bang on the nose at 1340 and carried fresh positive current through the canal and all the way down Buzzard’s Bay on the other side. Even better, we got to sail down Buzzard’s Bay, as the wind backed a bit and offered up three and a half hours of fine close-reaching at good speed. 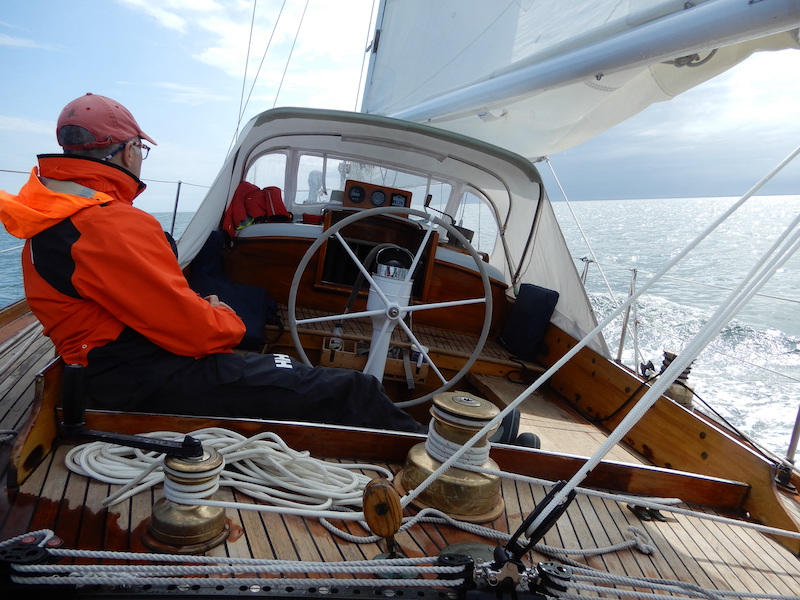 Adam keeps an eye on things as we sail down Buzzard’s Bay. Check out the new Antal bronze winches! 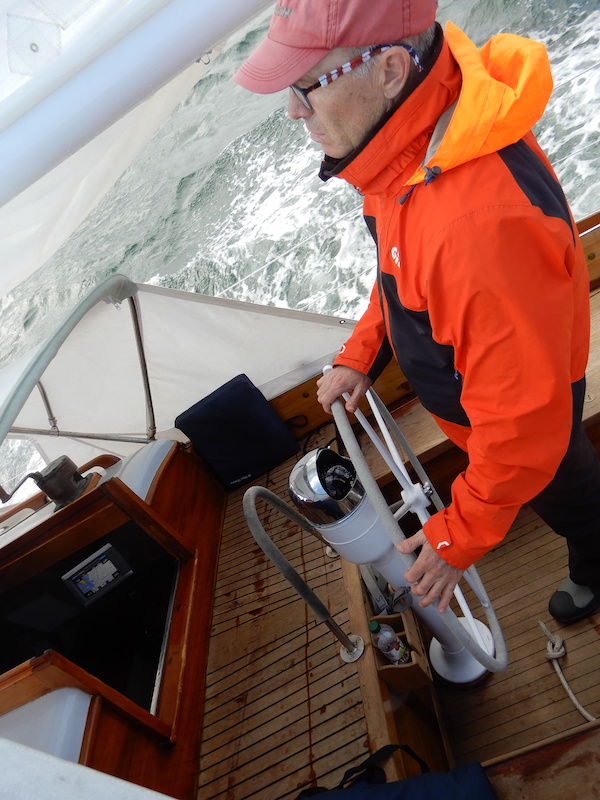 My one complaint about this boat: crawling up and down that companionway, with the wheel right behind it, a healthy bridgedeck, and the low-hanging dodger, was a struggle. It would have helped a lot to fold the dodger down out of the way, but it was brand new and I didn’t want us to be the first to crease the virgin plastic windows in it. That’s definitely a job for the owner! 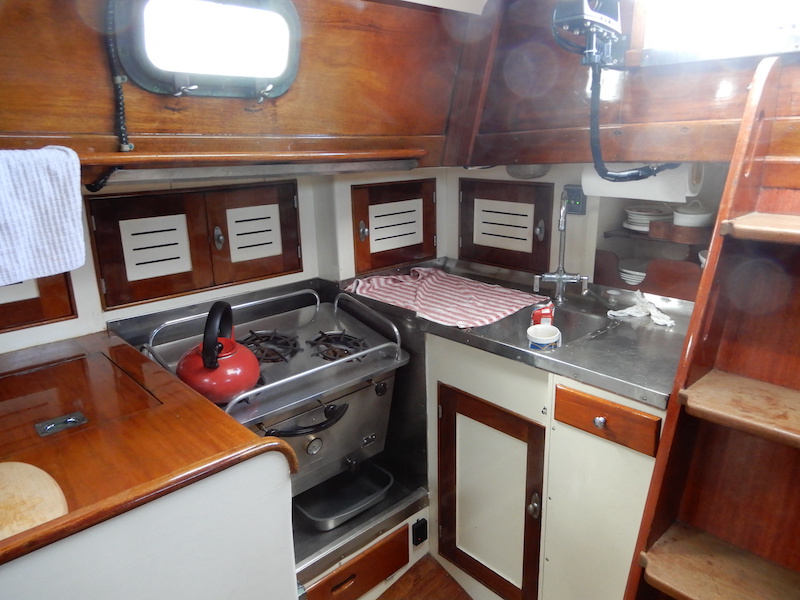 The galley. The period-correct stove, a duplicate of the original stove, was converted from alcohol to propane. Note the narrow companionway stair 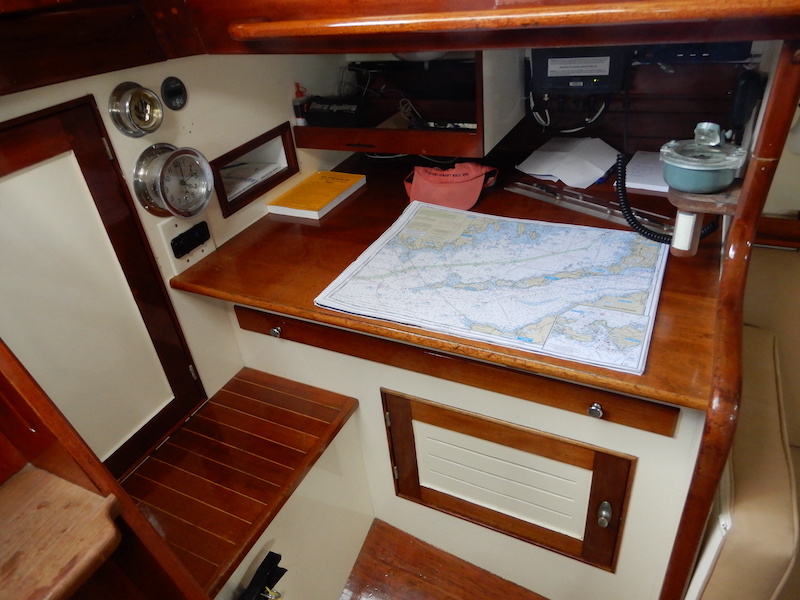 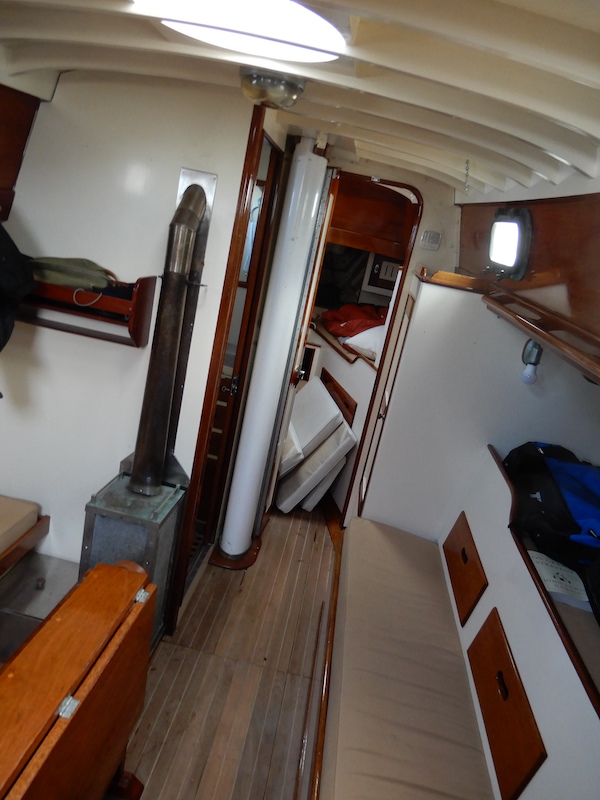 Looking forward. Best thing about a wood boat’s interior is the deck beams! That’s a solid fuel heating stove; the saloon table is gimbaled, of course

We pulled into the Sakonnet River mouth just as the sun was going down and parked behind Third Beach to catch some sleep, then were promptly off motoring again at sunrise. This once again set us up perfectly to catch the positive tide change at Watch Hill Passage at 1000 hrs. Soon afterward a quick 20-minute stop at the conveniently located Island Service fuel dock on Fishers Island allowed us to replenish the fuel in our modest 30-gallon tank with minimum time lost.

After a long day of motoring much of the length of the Sound we crashed again at Milford, just shy of Southport. The cherry on top was getting to sail the last short hop in a blustery breeze very early the following morning, after which we pottered gingerly into the tiny harbor at Southport to find Philip waiting for us on the yacht club dock. 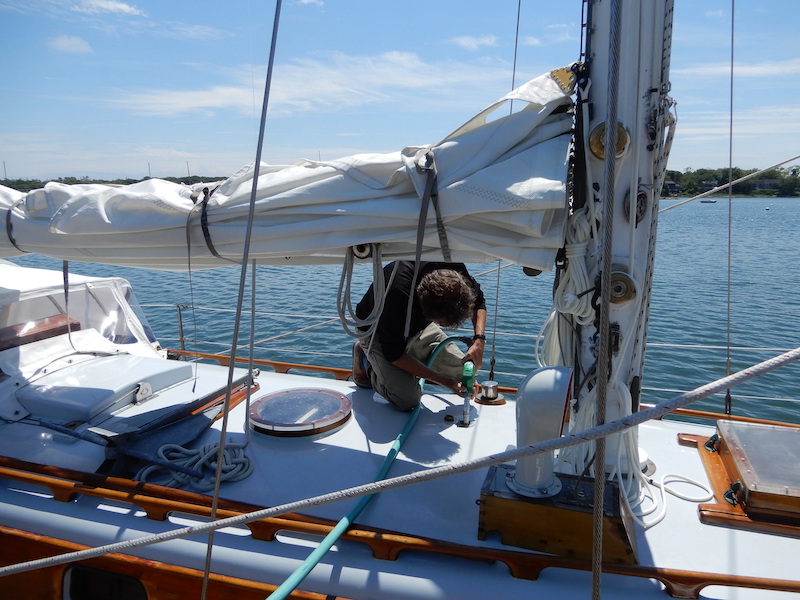 Yes, the fuel fill is on the coachroof. I hadn’t seen this before. The fill pipe, which is quite narrow, runs down through the head forward on a bulkhead, as does the vent line, the top of which is in the dorade box on the port side of the mast. The long fill pipe makes it easy to hear when fuel is climbing up it 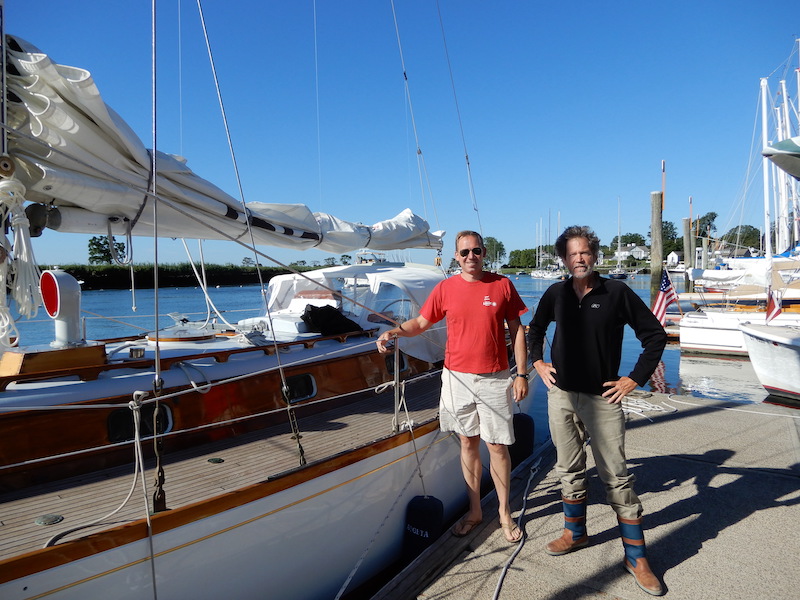 Me and Philip on the dock at Southport

All I can say is I’m a very lucky guy to have been paid good money to move a boat like this. Many thanks to Philip for trusting me with his new-to-him baby. Many thanks also to David Connelly, one of the prior owners, who briefed me on some of the boat’s particulars in Marblehead. Thanks also to the wind gods, who did allow us to experience a few hours sailing a boat as marvelous as this.

Finally, a big tip of the hat to Artisan Boatworks, the folks in Rockport who upgraded the boat for Philip. All the work they did, as far as I can see, was meticulous and very thoughtful. I can heartily recommend them to any other brave souls seeking to sail a vintage wooden boat on into the heart of the 21st century.