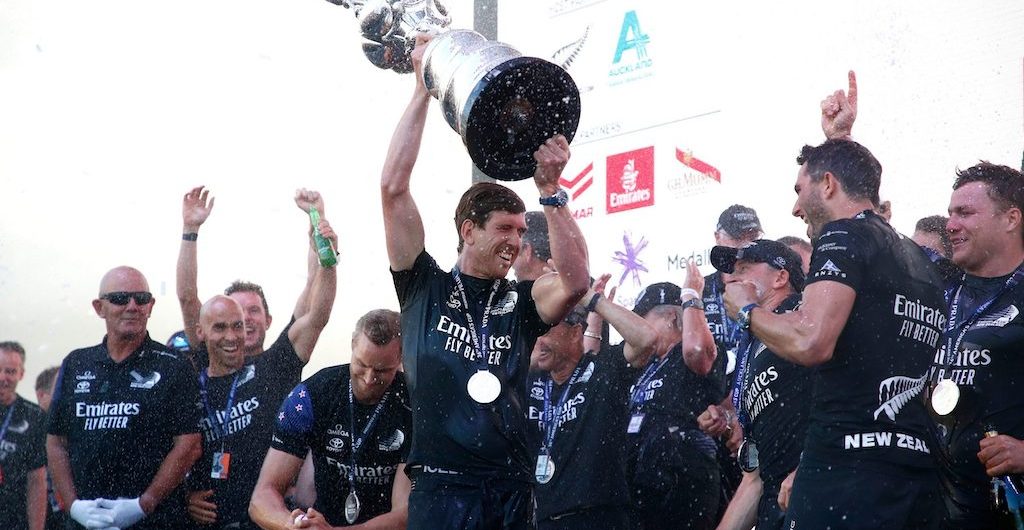 March 18/2021:  If you read blogs like this you likely know this already, so I’ll not belabor the news. Hats off to Team NZ for their successful defense of the America’s Cup, consummated yesterday in their seventh race win over Luna Rossa, the Italian challenger.

The most important thing now is to express heated opinions as to whether this 36th edition of the America’s Cup was a boring irrelevant travesty or a mind-blowing entrée into a brave new world of sailboat racing.

I expressed my own opinion on how to “fix” the America’s Cup in my regular Waterlines column in the March issue of SAIL. And I quote (myself):

[The Deed of Gift] establishes a trust wherein the defender of the Cup serves as trustee and largely controls competition. You don’t really have to go to law school to see the contradiction here. You can simply look up “trustee” in the dictionary: a person who holds and manages property in trust for the benefit of others. The notion of a trust wherein the trustee (the defender) regularly competes with the trust’s putative beneficiaries (the challengers and racing sailors generally) for the corpus of the trust (the Cup) is, on its face, a legal absurdity. I am amazed the several judges who’ve heard America’s Cup litigation over the years have never remarked on this.

Quite simply then, if you want to regularize America’s Cup competition–without defenders canting the rules in their favor, with predictable schedules and venues, realistic types of boats to race, and none of the lawsuits and psycho-drama–what you need is an impartial trustee, one who doesn’t race, running things. This after all is how normal sporting events operate. In NFL football, for example, it goes without saying that commissioner Roger Goodell should not be fielding a team of his own.

But I did (explicitly) leave open in the column the question of whether or not Cup racing actually needs this sort of fixing. For in the end what is truly unique about the America’s Cup, compared to all other sporting events, is that is so dysfunctional and crazy. The soap opera behind the racing is often much more fun to follow than the racing itself.

Do we really want to change that???

As to the immediate question of what we think of this new AC75 class of boats, I personally find them amazing. What else can you honestly say about a 75-foot monohull sailboat that never touches the water and can run at freeway speeds? If you believe Cup racing should be about pushing technological boundaries, you have to be in favor of these boats.

The more pertinent question, I submit, is whether the format used in this last Cup cycle is really the best way to race these boats. Squeezing boats this fast into tiny stadium-racing courses, just so you can sell tickets to live spectators, may not be the best way to go.

That said, in the end I found this last series to be more interesting than I expected. Once the two teams broke the pattern of win-the-start-win-the-race, it became more about boat speed, and it became clear that the Kiwis in fact had the faster boat (at least as long as it was airborne).

The best race by far was the penultimate one, race nine, where Luna Rossa did a great job coping with the Kiwis’ superior speed and kept it super close until the penultimate leg, where they called a wind shift wrong. A good old-fashioned way of losing a sailboat race:

As to what comes next, as the headline declares, Ben Ainslie and Team UK are now dithering with the Kiwis over how to move forward. Rumors have it they will keep the AC75 and may perchance race on the Solent if Team NZ can’t get enough public money to keep the fun in Auckland.

I kind of have a feeling Sir Ben was planning it this way all along.