Jan. 15/2021:  This has never happened before. Usually at this point in a Vendée Globe, with the lead boats well around Cape Horn and sailing back up the South Atlantic toward home, there is one boat well out in front with another perhaps a few hundred miles behind hoping for a lucky break. But this year there are no less than eight boats within striking distance of the lead boat as they race up toward the easternmost hump of South America, with less than 100 miles separating the top six boats. The lead has changed hands several times during the race… indeed several times over the last week.

So break out the popcorn kids! With about two weeks to go before boats start hitting the finish line off Les Sables-D’Olonne in France, it’s anybody’s guess how this will play out, with such variables as the Doldrums and the turbulent mid-winter North Atlantic lying directly ahead.

The current leader as I write, Charlie Dalin on APIVIA, is nursing a hobbled portside foil while reaching up the Brazilian coast on starboard tack. Still he’s keeping pace with second place Louis Burton on Bureau Vallée 2, just 20 miles behind him. Burton’s performance has been spectacular. He jumped the start back in November and was docked a penalty. He also suffered major damage to his mainsail track during an accidental jibe and had to stop off Macquarie Island some 930 miles southeast of Tasmania to repair it. This saw him dropping from second to 11th place at the time, and now he’s right back in the hunt. 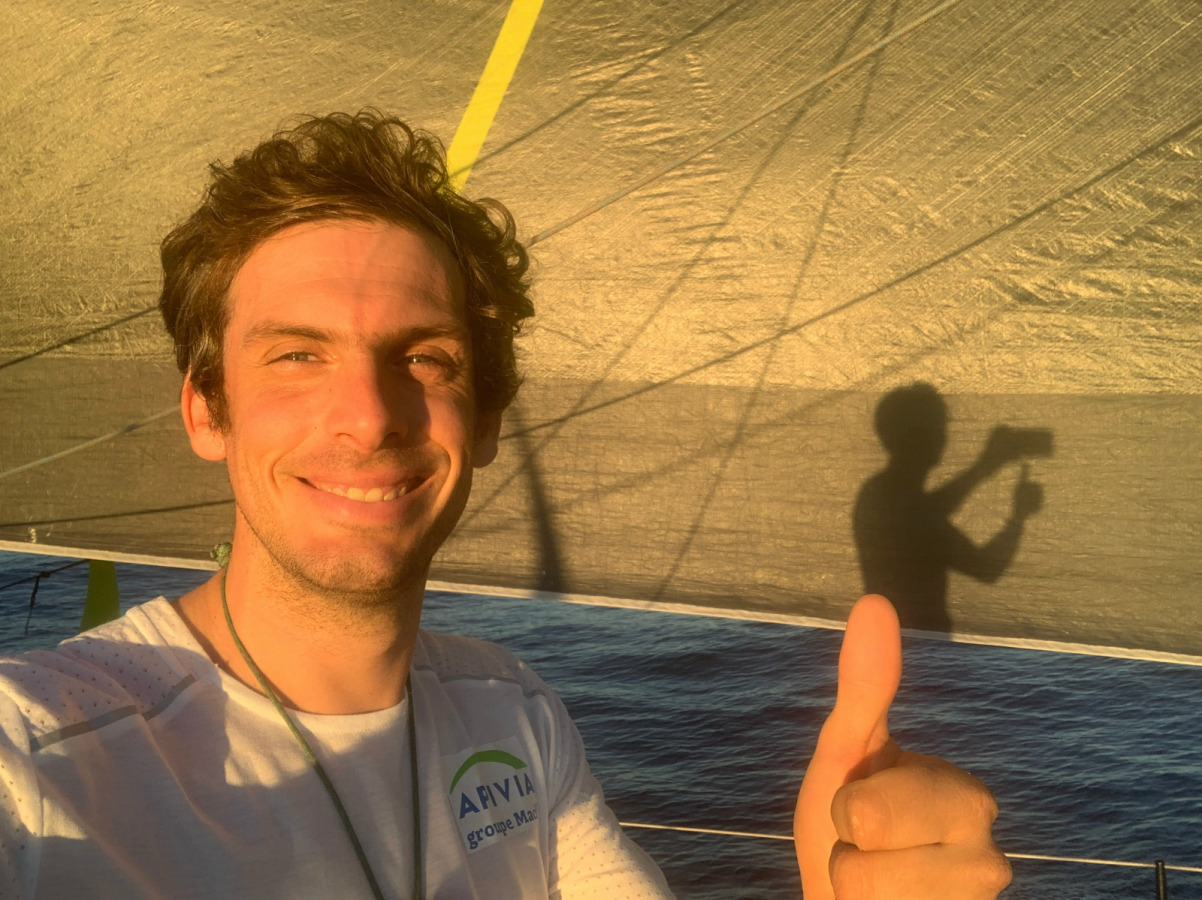 A selfie silhouette. Charlie Dalin in light conditions off Brazil 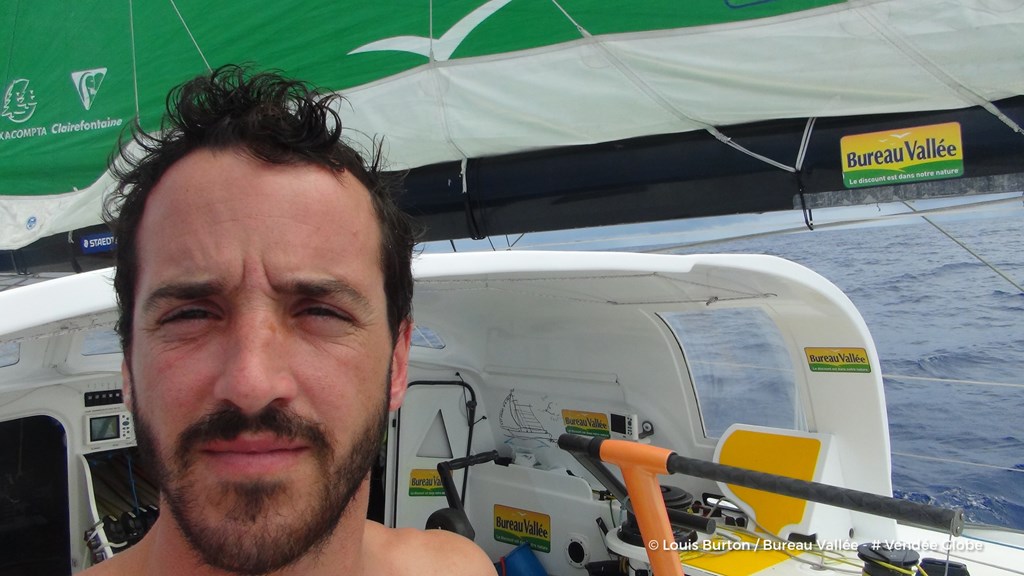 Last I wrote about the race I was bemoaning the fact that my favorite guy, Alex Thomson on Hugo Boss, had been forced to drop out after losing a rudder. After that my favorite guy became a girl, Isabelle Joschke on MACSF. I have a wee bit of history with Isabelle, as she and I both crewed on a delivery of a J/133 from New York to Annapolis some 18 years ago. She was an up and coming Mini sailor then, shy and very determined.

After Sam Davies dropped out on December 2, Isabelle became the top woman sailor in the fleet. She had struggled a bit early on, then found her pace and steadily worked her way into the front of the fleet, running as high as fifth place at one point. But on rounding Cape Horn she hit a big streak of bad luck. She lost her wind instruments, which prevented her from sailing on autopilot in wind mode, which meant she had to steer by hand as much as possible to stay competitive. Then the ram controlling her canting keel failed, which meant she had to lock the keel on centerline with an auxiliary ram. And still, amazingly, she managed to stay in the hunt. 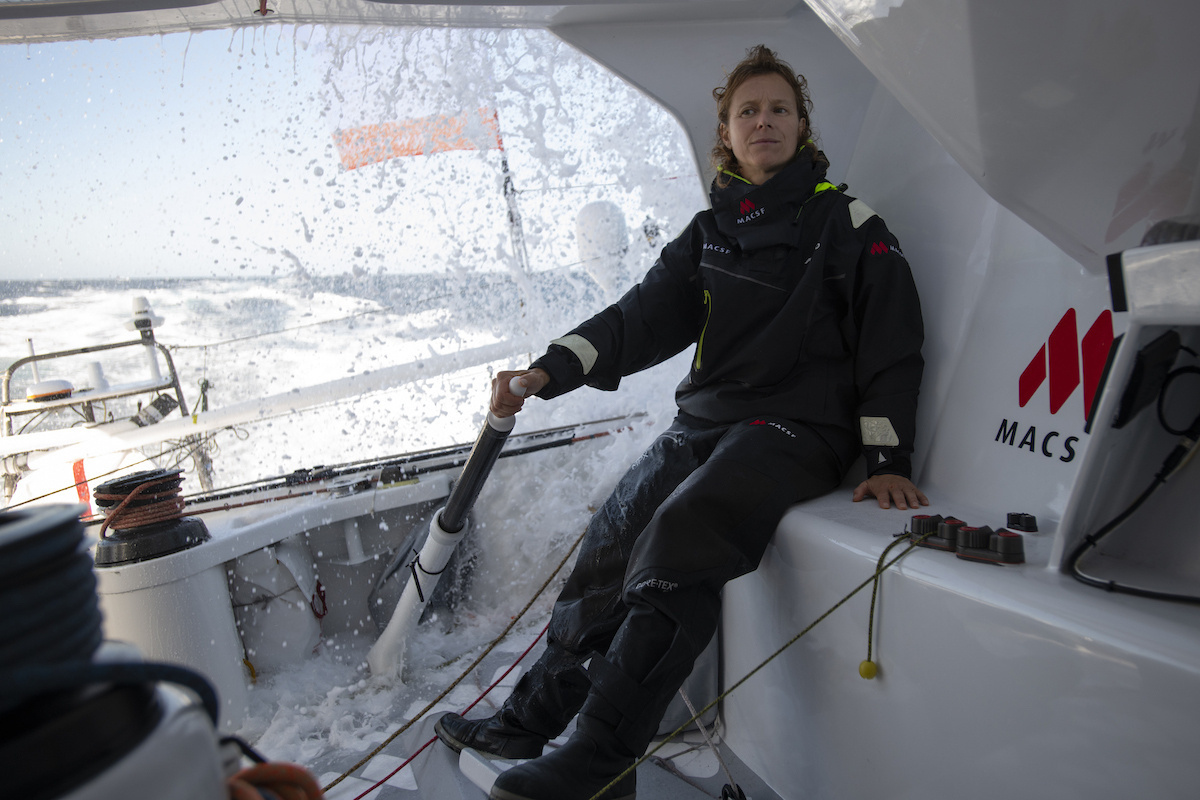 Isabelle Joschke on MACSF. In the video below she describes her woes

Then came the coup de grace. The auxiliary keel ram failed and on January 9 Isabelle had to drop out of the race. Now she sits in the mid-South Atlantic, with her keel flopping back and forth, taking on water, over 1,000 miles from the nearest land, praying she can get to a port in South America.

So now my new favorite guy is a guy again. Jean Le Cam. The wily old pro in the game, who has remained in the hunt throughout despite sailing an older boat, Yes We Cam, with no foils. He’s been as high as third place, but is now running in ninth, some 225 miles behind the first place boat.

One thing he has going for him is that he has some time in his pocket, some 16 hours and 15 minutes he is owed, as he suspended racing a while back to rescue Kevin Escoffier, whose boat suddenly broke in two.

For more on that check these two viddies here:

And again, one thing we’ve learned from this edition of the Vendée: you don’t necessarily need foils on your boat to be competitive. Four of the top ten boats have no foils, including Damien Seguine on Groupe APICIL, currently running fifth. And two of the top three boats, APIVIA and Linked Out (skippered by Thomas Ruyant) have foils that are damaged or missing.

My man Jean has stated he actually prefers to race in a boat without foils, arguing that foils in an event like this, sailing long distances in rugged offshore conditions, are apt to break and cause trouble.

To follow the action to the finish over the next two weeks check out the race tracker here.