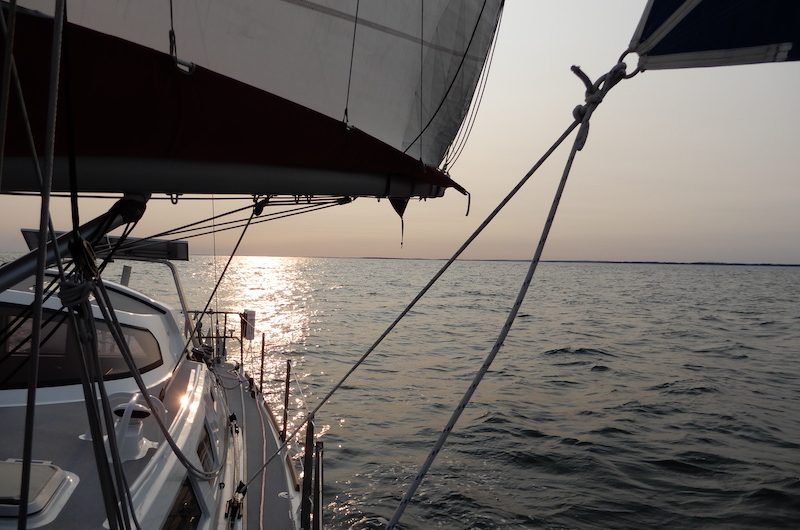 Sept. 22/2020:  I ventured forth again alone on Lunacy last week, starting on Tuesday, on a special mission. Sailing away from Portland that afternoon I couldn’t help but note the hazy sky to the west, which was, so my radio informed me, due to smoke blown clear across the continent from the rampant wildfires in Oregon and California. A sobering sight indeed.

Though I was downwind of the fires, from a high-altitude jet stream perspective, I was more or less at a right angle to the southerly apparent surface wind, which was first moderate, then grew a bit too light. I promptly hauled the spinnaker on deck to prepare it for hoisting, and lo… once again the wind became moderate, and the chute stayed on deck. 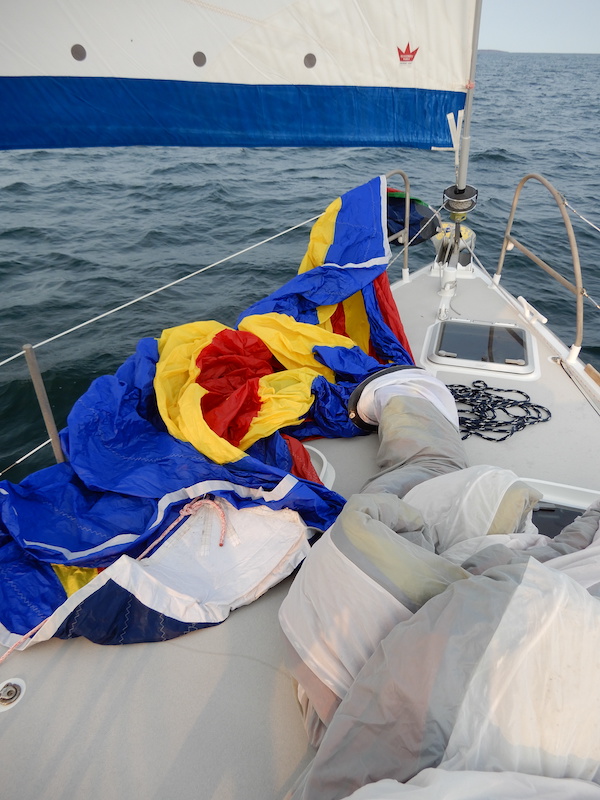 My new secret weapon. All I need do is display it, and the wind gods comply

My destination once again was Popham Beach, where I arrived just before nightfall. My purpose here was to visit my brother and an old friend, who were loitering in the area, but more importantly to dry the boat out so I could scrub the boat’s bottom and check the prop zinc.

Astute readers will recall that both times before when I’ve beached the boat, I’ve done it here near Popham. The first time was over in Atkins Bay, on a huge mudflat west of the Kennebec River entrance. The second time was on a flat in the channel between Long Island and Bay Point, on the east side of the river entrance.  The primary reason I like to dry out here is because I know the ground so well. Most other places I’d need to carefully reconnoiter first, to be sure of firm ground, without significant obstructions, which would mean waiting for at least one extra tide cycle.

When I awoke on Wednesday morning, hanging from a mooring on a rising tide, the wind was really howling out of the southwest, particularly over Atkins Bay, which tends to accelerate a southwest breeze. The one spot that was really sheltered from the wind was up close to the village of Popham itself, in the lee of Sabino Head, right in a corner of the tiny harbor in front of a house that happens to belong to my old pal Kurt Meinen.

Kurt assured me the mud there is still quite firm, so once the tide was up I dropped the mooring I was on and puttered over to Kurt’s house, dropping anchor about 50 yards off it. Both his neighbors and the local harbormaster were agog at this, as though Lunacy was an alien spaceship landing in their midst. 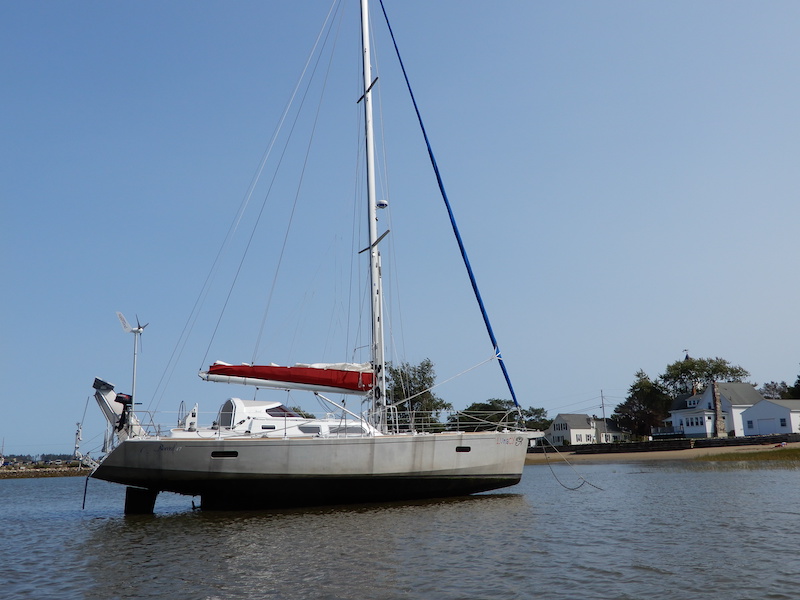 Lunacy has landed! Coming out of the water at Popham as the tide recedes. Evidently no one had ever seen a 47-foot sailboat anchor here before 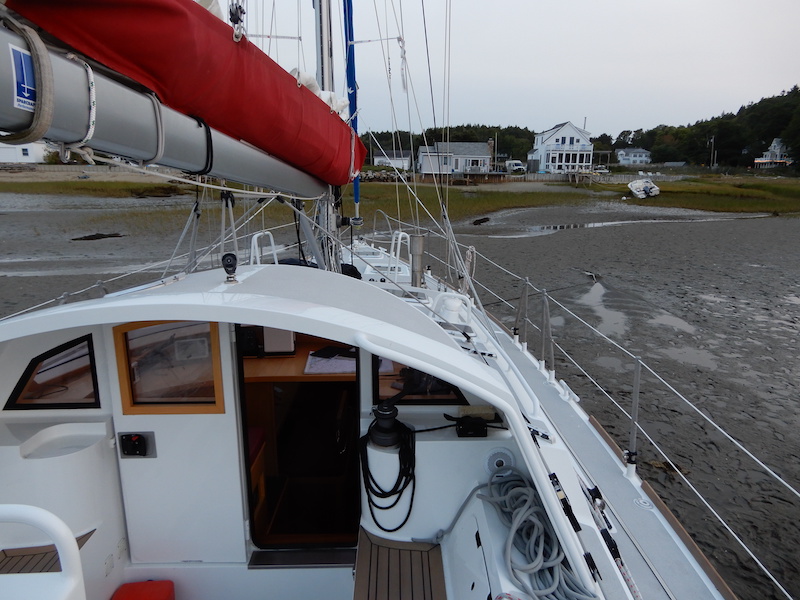 View from onboard once the water went away. Kurt’s house is the white one on the right, with the skiff beached in front of it. Kurt decided he might as well blast that skiff clean with his pressure-washer. I thought a bit beforehand about maybe driving Lunacy hard on to the beach in front of the house too, so I could also use the pressure-washer, but ultimately decided against it 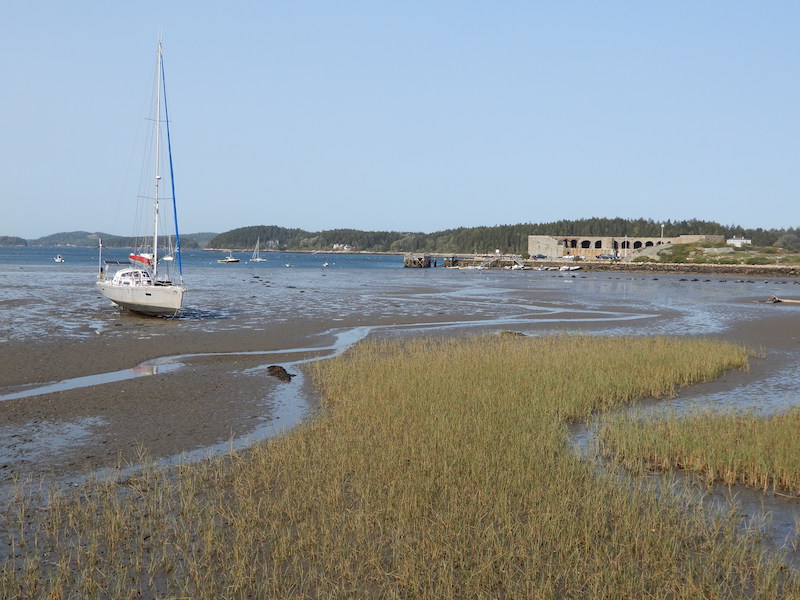 Lunacy as seen from Kurt’s house after her bottom scrub, with Fort Popham on the right. My brother Peter, who was staying at our aunt’s house nearby, lent a hand. There wasn’t too much growth, but the prop zinc was gone and did need replacing 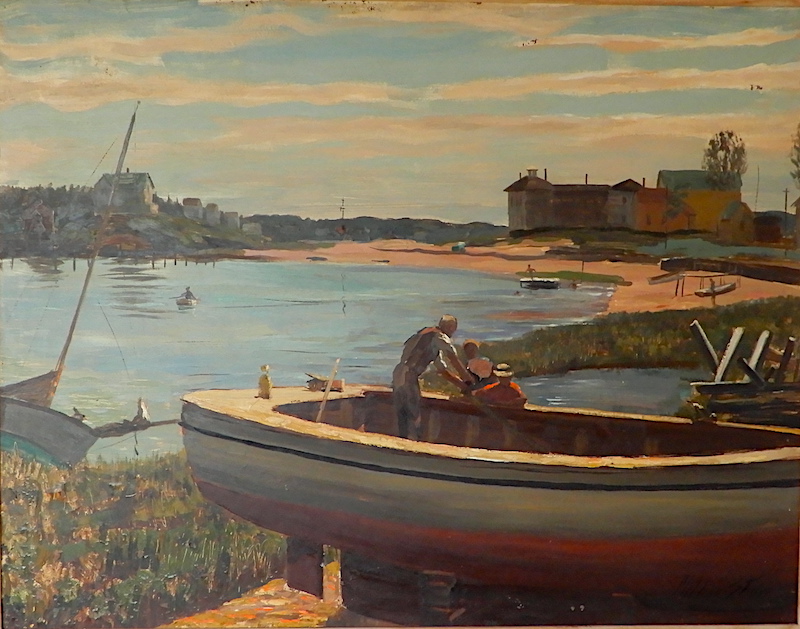 This painting, by my grandfather (which coincidentally now hangs in my aunt’s house in Popham) depicts the very area where I grounded the boat. I have to say, of the three places I’ve dried out the boat around here, this was the spot that worked best 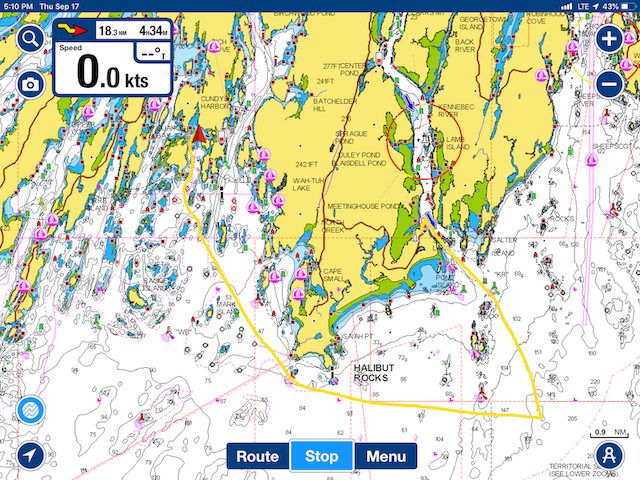 The next day, Thursday, after waiting for the afternoon’s ebb tide, I sailed out the Kennebec, and beat my way over to Ridley Cove, between Quahog Bay and Cundys Harbor 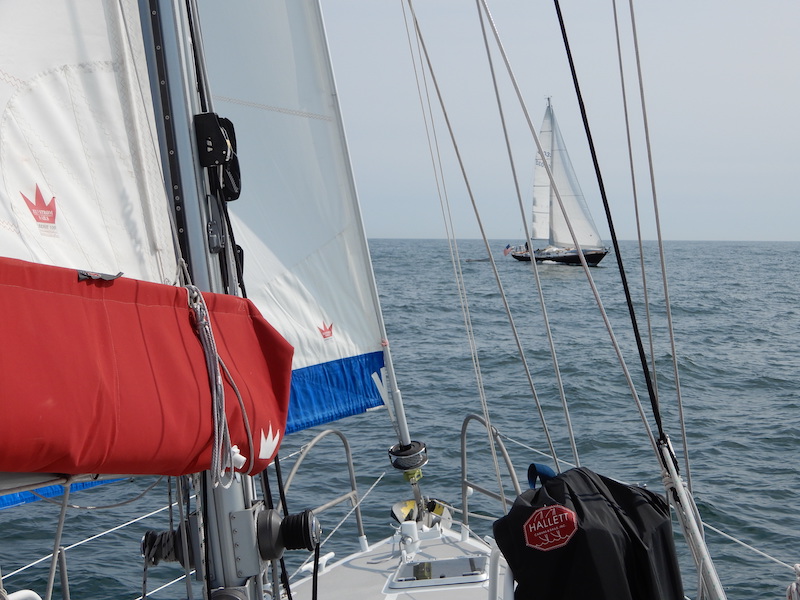 I crossed tacks with this smart-looking westbound Hinckley just inside Seguin Island. It sailed several short boards close to shore, as opposed to the two very long boards I sailed out and around Seguin, and made much better time than I did 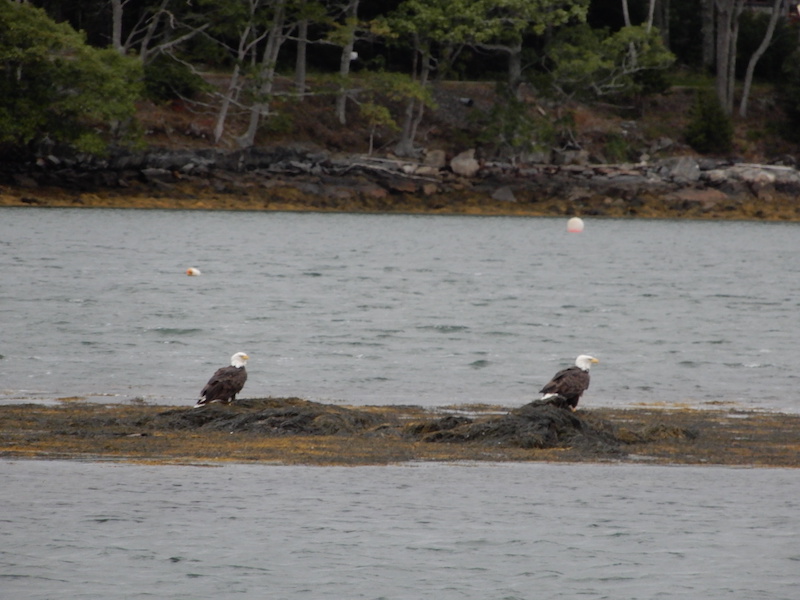 It was grey, cold, and blowing pretty hard from the north in Ridley Cove on Friday morning. I realized, sadly, that summer is well and truly gone now. But one thing that brightened my day was spotting these two bald eagles hanging out on a low tide rock as I sailed out the cove 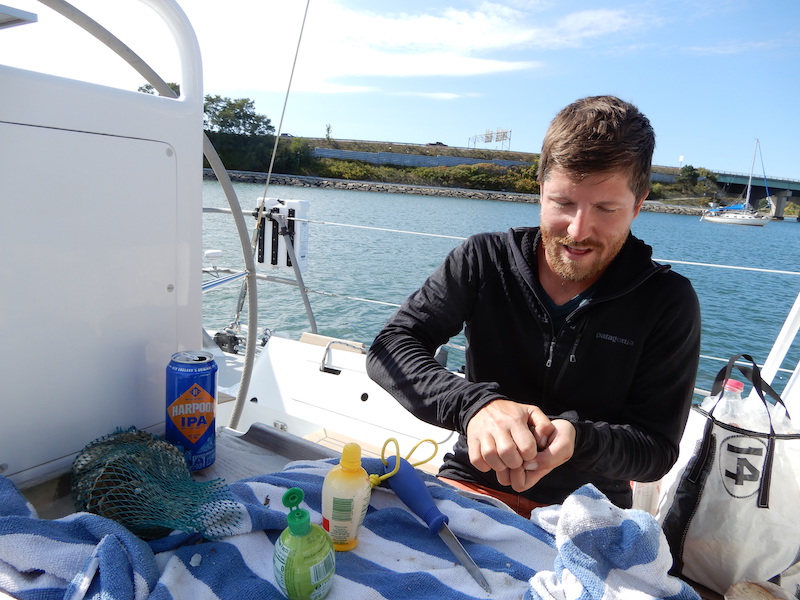 Further day-brightening ensued when I returned to my mooring in Portland. First, the day itself actually did get brighter, as the sun broke out and chased the clouds away. Also, young Sam Holmes, who was introduced to me remotely by our mutual friend Emily Greenberg, just happened to have anchored his Cape Dory 28 (seen in the background here) close to my mooring, under I-295, between the baked bean factory and the sewage treatment plant behind Maine Yacht Center. He paddled over in his deflatable boat and fed me beer and fresh oysters!

You can check out Sam’s famous YouTube feed right here.