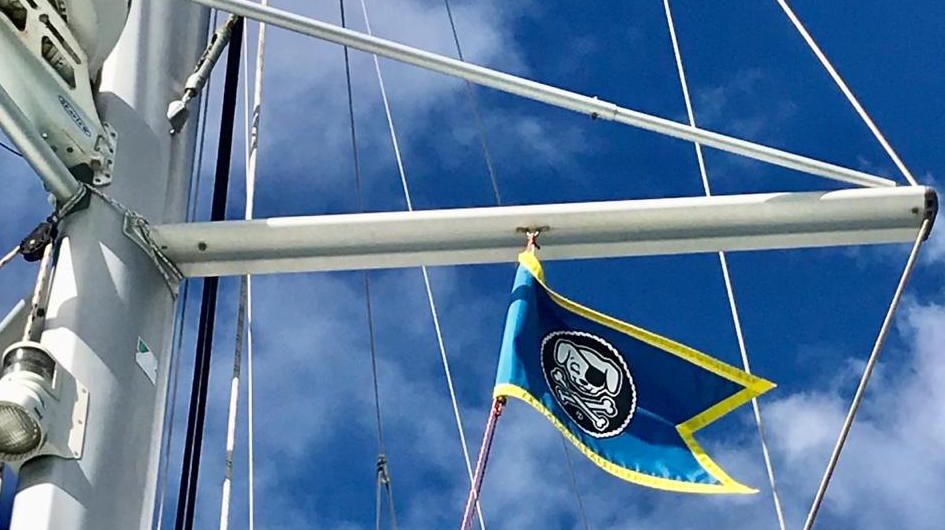 June 26/2020: I realize now I am one of the lucky ones. First, I haven’t died of Covid-19, like my old friend Patrick Childress. (I did perhaps suffer through a very mild case back in early February, but so far I haven’t been able to confirm this.) Second, I didn’t take my boat down to the Caribbean this past fall. Instead I just took her to Georgia. Though my plans for a serious Georgia cruise did fall apart, getting the boat back north again wasn’t very hard (see earlier posts here and here).

If I had taken Lunacy down to the islands, things would have been much more complicated. Some of the stories I’m hearing are a bit hair-raising. As islands throughout the Caribbean started locking down in March and refused to receive visitors, cruisers confronted various confounding dilemmas, depending on their individual circumstances. (Remember Hank Schmitt’s story?)

Some folks who left their boats unattended in marinas for a while (I likely would have been one of these) found suddenly they couldn’t get back to those marinas. A lot of these people were forced to remotely hire locals to haul their boats and store them on the hard for the coming hurricane season, prompting a wicked boost in insurance premiums (in one case, I heard, a couple had to pay an extra $18K to keep their boat insured). A few managed to mount special operations to get back to their boats under the radar.

Many other people who cruise the islands shorthanded during the winter (usually with just a spouse), then have crew fly in for the delivery home in the spring, found suddenly their crews couldn’t join them. There are also a large number of people who base their boats permanently in the islands. They cruise their boats during the winter, then sail south to hurricane-free islands such as Trinidad, Curaçao, Bonaire, and Grenada to have them hauled for the summer. Boats like this tend to be smaller and may be equipped more for island-hopping rather than long ocean passages. Their owners, who often buy their boats in the islands and may have little or no open ocean experience, now found they couldn’t return to their summer storage bases and had to make other plans.

The Salty Dawg Sailing Association, as I’m sure you know, has been running cruising rallies back and forth between Chesapeake Bay and the British Virgins Islands for many years now. Like everyone else their plans for the spring got tossed in the bin when the virus popped up, but they were not content to simply cancel their northbound rally, which normally attracts just 20-35 boats. Instead they saw that if they were to stay true to their creed of “sailors helping sailors” they needed to rise to the challenge of the Caribbean Covid Crisis.

What they did was remarkable. They dispensed with their rally’s normal equipment and experience requirements (at least two offshore communication devices and at least one crewmember aboard with serious ocean experience), deleted their regular entry fee  and announced to the Caribbean cruising world (mostly through social media) that they would help any and all boats, departing from wherever in the Caribbean, get to wherever they were going on the eastern shore of North America.

No one was really sure how many boats would take up this offer. SDSA president Hank George told me, however, that he guessed it might be something like 200 boats, and he wasn’t too far off the mark. In the end 252 boats registered to join what the Salty Dawgs dubbed their Homeward Bound Flotilla and 184 of those, with 473 sailors aboard, actually participated. It was, I believe, the largest organized group ever to sail between the Caribbean and North America. (Note: southbound SDSA rallies in the fall normally see about 70 boats joining.) 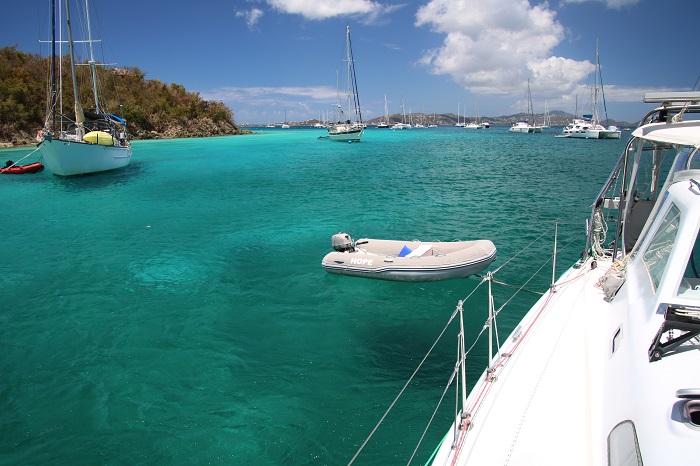 A crowded anchorage at St. John, USVI. The U.S. Virgins were the only islands that continued to receive transient boats as the crisis unfolded, hence became a magnet. The local government promulgated various decrees to protect residents and control these guests  (Photo courtesy of Bob Osborn) 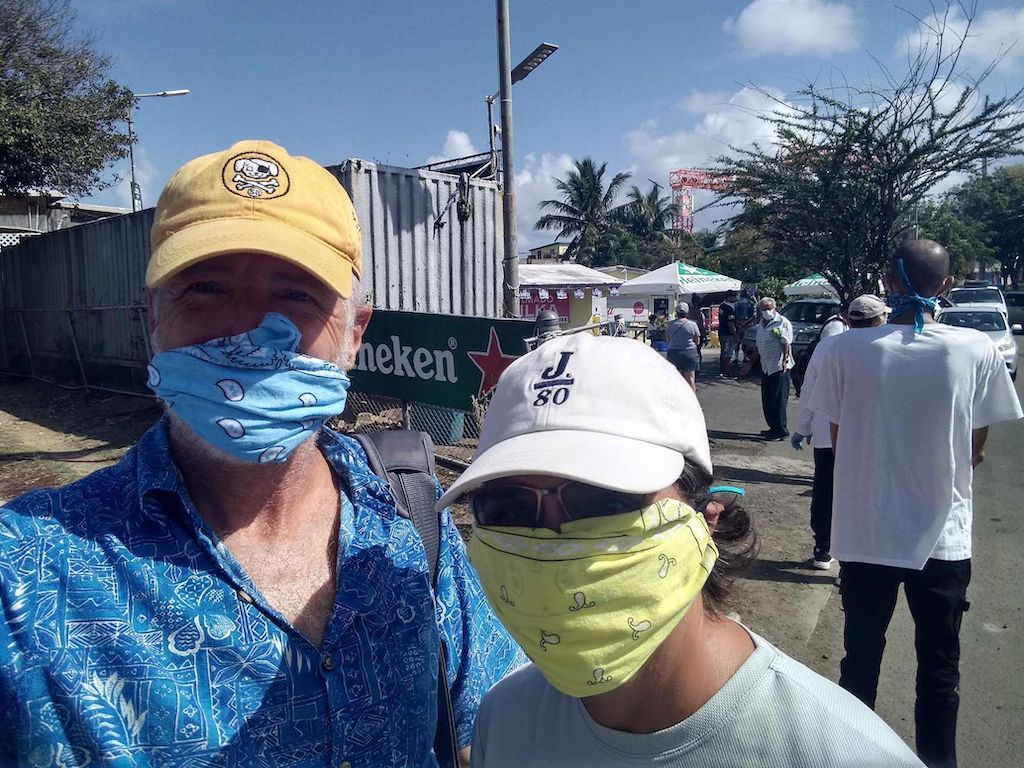 No, the Dawgs didn’t throw any big parties for their flotilla members, but participating boats did get big value for their $0 entry fees. A team of 22 Dawgs plus their regular weather-router, Chris Parker of Marine Weather Center, supported six waves of boats as they traveled by various routes home through two tropical storms and one nasty trough. Though the flotilla management did not dictate routes to skippers, they did advise that they considered the route directly west, south of the Bahamas and north of Cuba, down the Old Bahama Channel, to be the wisest choice, particularly for less experienced crews, as it is all downwind and the shortest route to U.S. waters.

Prior to departure the crews of each boat were urged to quarantine aboard for 14 days, to be sure no Covid-19 cases flared up on passage and also to reassure authorities in any harbor they might arrive at. Departures were scheduled on five successive Sundays, from April 12 to May 10, plus one Wednesday, the last departure, on May 20. Boats, again, could leave from anywhere in the Caribbean, but most conveniently had gathered in the U.S. Virgin Islands, as these were the only islands that continued to receive visitors after all other islands locked down.

To help the Salty Dawgs keep tabs on all their boats, PredictWind stepped up and provided free tracking for the fleet. Prior to each departure date SDSA coordinators worked with skippers to ensure they could plug into PredictWind’s system. Boats lacking the technology to do so were assigned buddy boats that could keep them in the loop via VHF radio. Less experienced skippers with less well equipped boats were also assigned buddies. 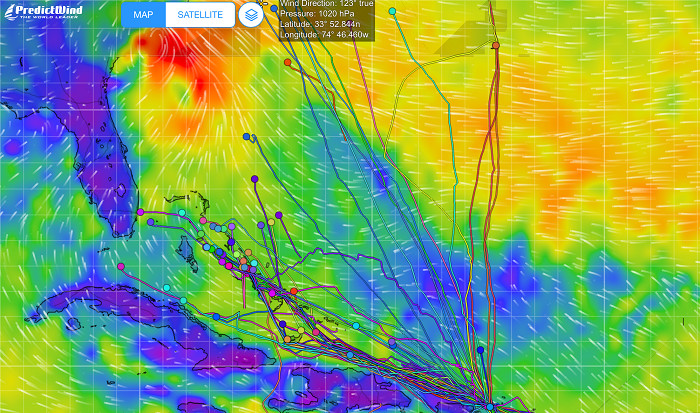 While boats were en route a rotating team of shoreside coordinators worked 24/7 to maintain contact with and verify each flotilla member’s status and position and also fielded about 100 queries a day from the fleet. Chris Parker meanwhile provided regular individualized weather forecasts, and expert emergency response teams helped skippers troubleshoot any special problems they encountered. These included the regular gamut of rigging failures, engine trouble, steering and communications problems, and in one dramatic instance a catamaran that was flooded after its sliding glass saloon door was stove in by a rogue wave.

Another team of Dawgs meanwhile maintained constant communications with the governments of the U.S., the Bahamas, Bermuda, and other islands so they could keep flotilla members fully informed on the ever fluctuating emergency proscriptions and regulations being issued across the region. A total of 81 advisory updates were issued to the fleet (they are archived here and are well worth studying if you want to understand how truly complicated and fluid the situation was).

Most importantly, the Dawgs ultimately succeeded in convincing the Bahamian government, which originally banned all boats from their waters under threat of $10,000 fines, to let flotilla members stop in the Bahamas if necessary. This was critical, as in the end most flotilla members routed through or around the Bahamas and almost 100 boats took advantage of the special exception the Dawgs carved out for them. 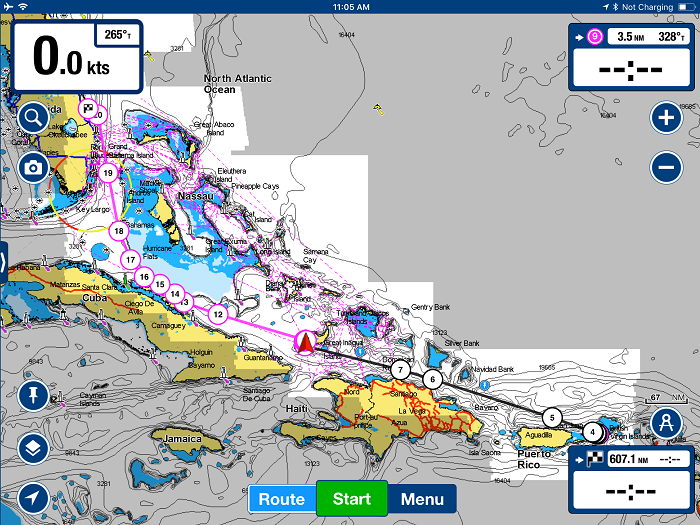 Navionics display showing route of Pandora, an Aerodyne 47 belong to Bob Osborne, an SDSA board member who participated in the flotilla. Bob’s experience was fairly typical. His wife Brenda normally flies home after her season in the islands, and Bob sails the boat home with a crew. In this case they had to sail home doublehanded on what was Brenda’s first big offshore delivery. Here we see Pandora is at Great Inagua, in the Bahamas, where she was able to put in to shelter from weather thanks to the SDSA’s lobbying of the Bahamian government  (Courtesy of Bob Osborn) 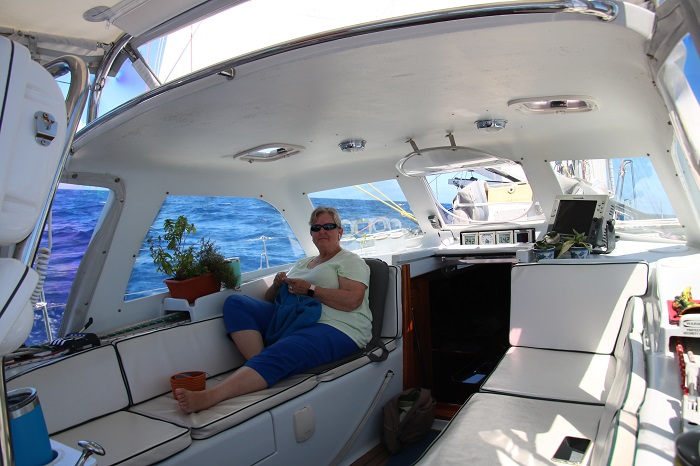 Brenda aboard Pandora while underway. Bob maintains a detailed blog of his adventures afloat at sailpandora.com. If you want to get a very granular picture of what sailing in the Caribbean was like this past spring it is well worth a read. Bob also was one of the board members who pushed early on for the SDSA to organize the flotilla  (Photo courtesy of Bob Osborn)

At the end of the day, you’ll be glad to hear, the Salty Dawgs did well by doing right. Though they did not charge any fees for the services they provided to the flotilla they created, they did solicit voluntary donations and received enough to cover their costs and then some.

Those interested in venturing south to the Caribbean with the Dawgs in the fall should check out their website. 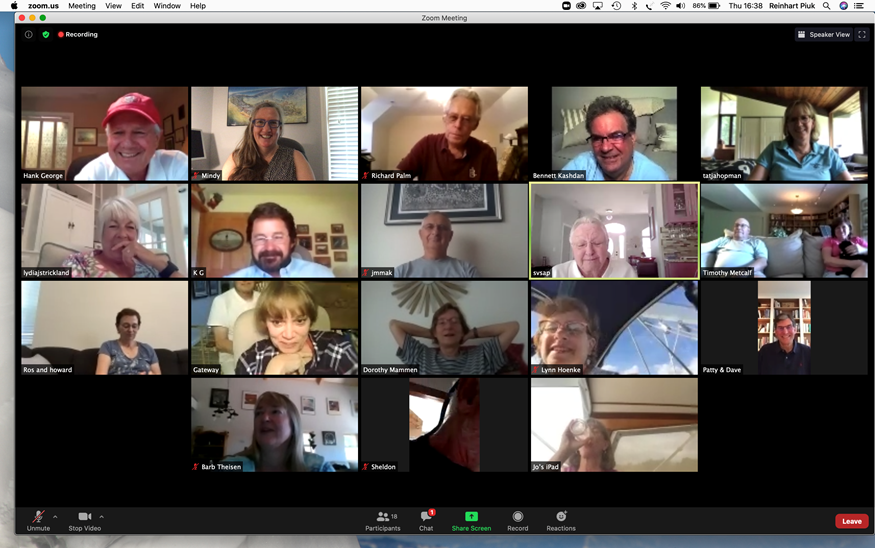 All the Salty Dawgs who helped run the flotilla worked as volunteers and deserve lots of recognition. They are…

A special thanks also to Chris Parker, who discounted his services to the SDSA and worked like a dog (pun intended) to provide everyone in the flotilla with accurate individualized WX forecasts.

(Insert audience applause for everyone involved)