Jan. 22/20:  I’m dying to learn more about this. Seems a commercial vessel, a “geared bulker” in merchant marine vernacular, name of M/V Sunda, stopped to rescue the crew of a certain sailboat, along with a dog, somewhere in the mid-Atlantic, on January 10. The lack of facts is striking. We don’t know the location where the rescue took place, or the name of the stricken sailboat, or the names of any of the crew.

But yes, we do know the name of the dog–a French bulldog, Pascha–and that the crew, who were uninjured, claimed to require an evacuation because of engine failure. We know, too, that the crew consisted a French family of three, a couple and their 16-year-old son, plus a Portuguese skipper.

The skipper and crew of Sunda really stepped up here and are to be commended. After receiving word of the sailboat’s distress the ship stood on station by the stricken vessel through the night and evacuated the sailboat crew the following afternoon, in spite of having to suspend operations five times due to the challenging conditions. The sailboat was evidently left to drift and Sunda proceeded to Macapa, Brazil, where the rescued persons and Pascha the dog disembarked six days later. Sunda is currently berthed at Santarem. 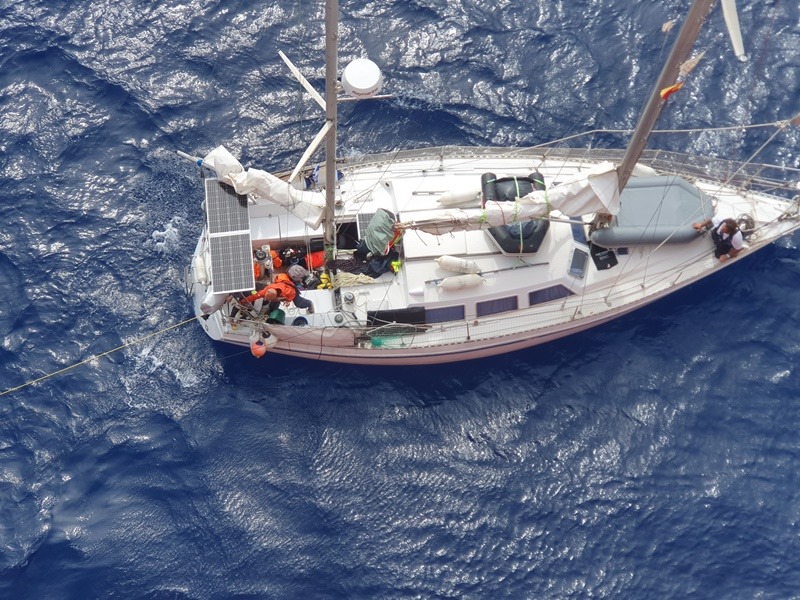 The mystery sailboat presumably was bound west across the Atlantic, bound for somewhere in the tropical Americas. Note the photo above, which shows what appears to be a Spanish courtesy flag flying in the rig. This suggests the vessel may have departed from the Canary Islands and the crew neglected to douse their courtesy flag.

From these angles I don’t recognize the make of boat, which looks to have an LOA of somewhere in the mid-40s. Feet, that is.

I can only hope that engine failure wasn’t the only reason this boat was abandoned. From the photos the rig looks unharmed. If you want to jump into a forum thread full of judgmental comments and speculation on what might have happened check this out. Meanwhile, I’m assuming there’s a more nuanced tale to be told here. Hopefully we’ll have more details, beyond the name of the dog, soon enough.