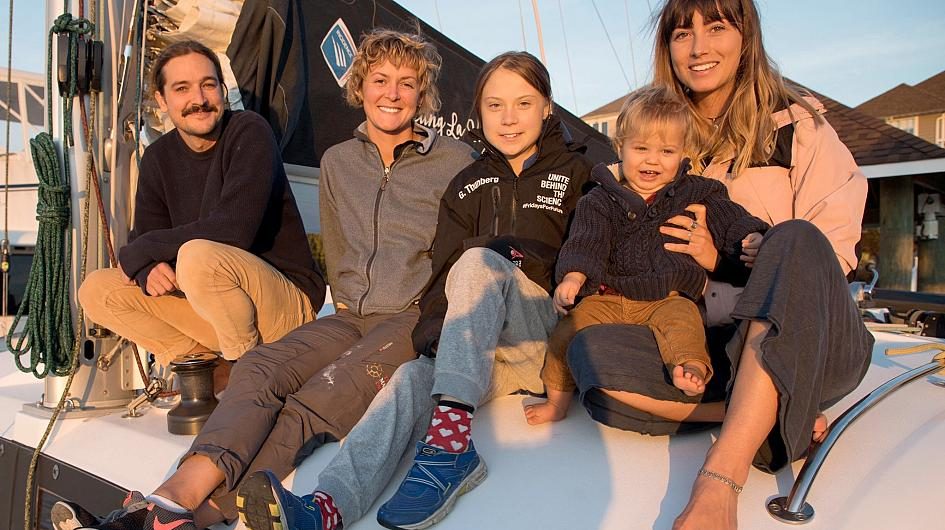 Nov. 21/2019: Here’s a bit of synchronicity. I was only vaguely aware of the La Vagabonde YouTube phenomenon, then became much more interested after I saw how rabid their fans are at the Annapolis show last month. And, of course, like everyone else I’ve been hearing and seeing a lot about Greta Thunberg, the teen climate activist from Sweden who has been touring the U.S. scolding adults for trashing the planet. So you can imagine that my attennae perked up a bit when I learned that Greta is now sailing transatlantic aboard La Vagabonde in a desperate bid to get to Europe in time for the next UN climate conference, which ends December 13 in Madrid.

Greta, you’ll recall, sailed transatlantic, east to west, in August aboard the IMOCA 60 Malizia II so as to attend the last UN climate gathering in New York. The idea being to reduce her carbon footprint by not flying. She had planned to make her way overland to the next conference in Chile, but rioting there forced the UN to move the venue to Madrid. Hence the need for another sailing jaunt.

Sailing west to east across the North Atlantic in November is a very serious proposition. Especially when you consider that Riley Whitelum and Elayna Carausu, the Aussie couple who run La Vagabonde, an Outremer 45 catamaran, sail with their infant son Lenny aboard. To make this run they have beefed up their crew with a very experienced ocean sailor, the Brit Nikki Henderson, who last year became the youngest skipper of a Clipper Round-the-World boat.

You can follow their progress in real time at the La Vagabonde website. I’ve been doing this ever since they left Norfolk, Virginia, last Wednesday. They’ve been doing a fantastic job so far! Coming out of the Chesapeake they successfully gamed a big Hatteras low that was forming, shooting to its south side and staying far enough from its center to keep on a strong beam to close reach on starboard tack.

They’ve since bypassed Bermuda and have now reached a critical point. They slowed down, and even went north for a short bit as a strong front passed over them. As you can see in this screenshot from their PredictWind tracker this morning, they are now between the large low north of them that spawned the front they are trailing and another very compact deep low on the tail of the front: 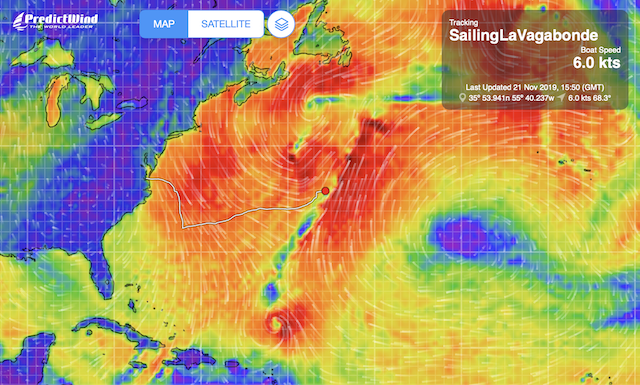 As you can see in this morning’s OPC surface analysis, that second low is named Tropical Storm Sebastien: 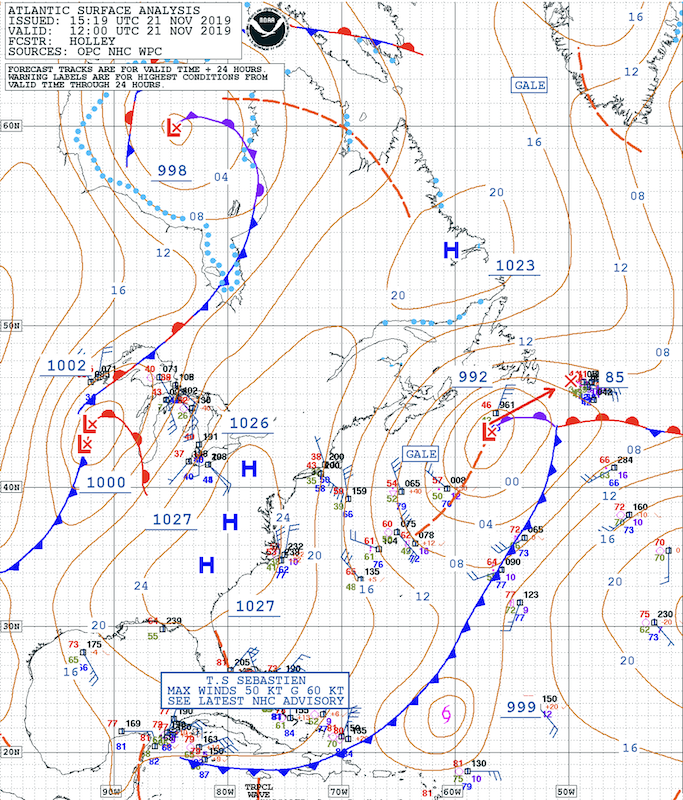 Studying the models and forecasts it looks like Sebastien, like La Vagabonde, is heading straight for the Azores. Fortunately, Sebastien should be getting weaker, and I’m guessing, or hoping anyway, that La Vagabonde should be able to stay far enough north to not get involved, or if necessary can slow down again and let the storm pass in front of them. 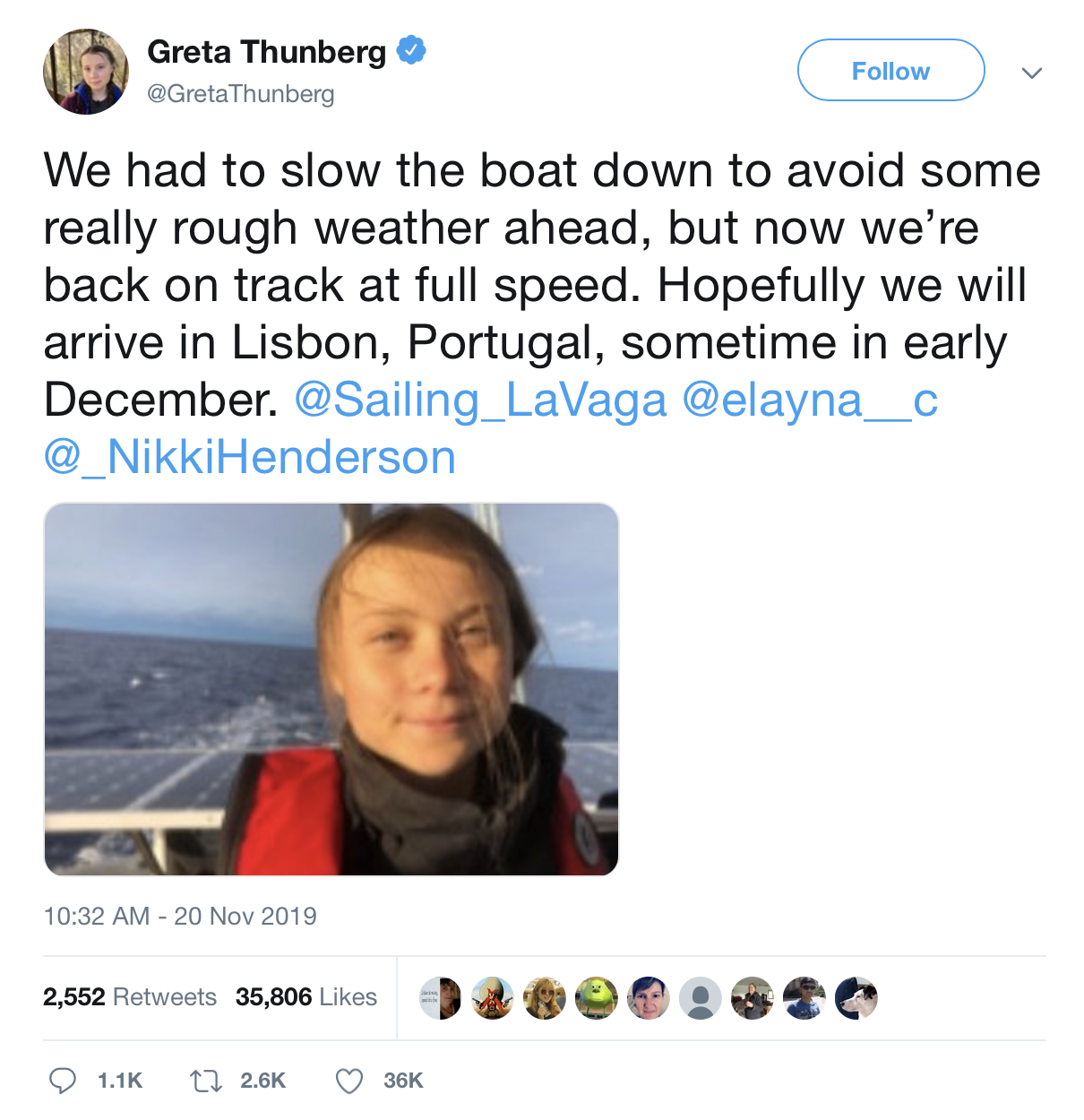 It should all make for a very interesting YouTube video!

Meanwhile, Greta has had some impact on the larger sailing scene. A Facebook group I follow, Sailboat Hitchhikers and Crew Connection, has seen its membership soaring since Greta started thumbing her way back and forth across the ocean. The Guardian has reported on this, dubbing it the “Greta Thunberg effect.” What the Guardian failed to note is that the wave of clueless newcomers on the page looking to ride on bluewater cruising boats has sparked a brush-fire of mean-spirited trolling by more experienced members. The page’s moderators have been kept busy tamping things down by deleting nasty commentary.

And Greta, of course, has inspired many nasty trolls herself, including, as I’ve noticed on my own FB feed, quite a few sailors.

I try not to wade into politics here, but seriously people, this shouldn’t be political. We’re talking about our children. Ultimately, we are failing as a species if we can’t provide for and protect them. That people are willing to vilify children who are actively interested in their future–kids who take action to hopefully make the planet a better place, or, for Christ’s sake, to avoid being shot to death at school–is simply mind-boggling.

I’ve said this before, I’ll say it again: sailors, at least, should be better than this.

Meanwhile, if you really can’t control yourself, here’s a number to call: