Oct. 11/2019: Since visiting the America’s Cup 36 scene last month to glimpse the launching of the first new foiling monohull AC75, I’ve noticed three more AC75s have launched, and lo, they have gone airborne too. The first to fly was American Magic’s Defiant (up top), which was launched soon after Team New Zealand’s Te Aihe.

With four of the five syndicates showing off their babies, we can now get a sense of the design variations in this new class of aircraft… oops, I mean boats. 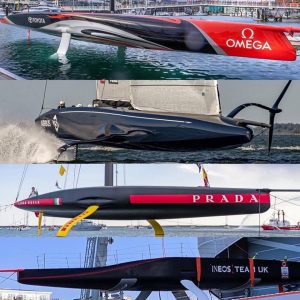 Not only is there variation among hull forms, but also among the foil wings. The foil arms and canting mechanisms (also masts and rigs) are one-design pieces, but not the winglets sprouting from the bottom of the arms. 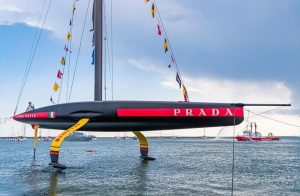 The Italian boat, near as I can tell so far, has the most unique winglets, with very pronounced bulbs

Some moving pictures to prove it:

I hear lots of moaning and crying amongst sailors about how boring these new boats are, how common sailors can’t relate to them, and about the sad fate of the America’s Cup, but we always hear that about the America’s Cup, don’t we? Personally, I find all this fascinating. Every team this time is climbing a super-steep learning curve. Last time that happened, in the 2013 America’s Cup in San Francisco, we were treated to the most exciting comeback triumph (Oracle Team USA winning 8 straight races to overcome an 8-1 deficit) in all of sports history.

Another possibility, of course, given how new these boats are, is that one boat will be radically better than the others and the racing will become a mere formality. In which case, the interesting part of the process is studying the evolution of these designs.

Meanwhile, over in the Land of the IMOCA 60 the second generation of foiling monohulls are gearing up for the next Vendée Globe. Last time the foils were sort of tacked on, and the boats came nowhere near flying. The foils were really just a tool for reducing effective displacement while sailing. This time, however, hulls are definitely snatching at the sky. 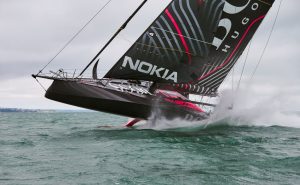 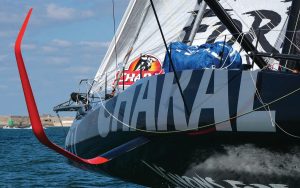 Foil on Charal, winner of the IMOCA 60 class in this summer’s Fastnet Race

Of course, when racing around the world in high latitudes nonstop, you can’t expect to sail in flat water. With boats trying to fly in big lumpy waves, one can expect to see a lot of spray flying. And huge sudden changes in boatspeed as flying objects slam into walls of water.

I doubt it will be a comfortable experience. 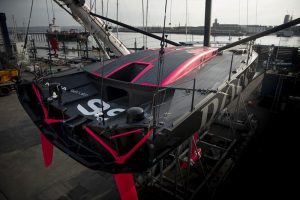 Protection from the elements. Totally covered cockpit on the new Hugo Boss 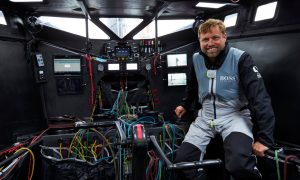 Inside the cave. I don’t know about you, but I might get depressed living and working in a black hole like this for months on end. Which is why, as part of his training regimen, Alex is practicing smiling a lot